IMPERIAL VALLEY — The current pandemic has forced many people to work from home nationwide, including students.

Now thousands of Imperial Valley children are set to benefit from a partnership in the works between the Imperial Valley Telecommunications Authority and public agencies throughout the county.

Representatives from the Imperial County Office of Education, which serves as network administrator for the Imperial Valley Telecommunications Authority, went before the county Board of Supervisors on Tuesday, Nov. 10, to ask the county to partner with them to create a carrier-class public agency wireless network infrastructure.

Discussion began last year to spread from a wired service to wireless, and things only ramped up when COVID-19 shut down nearly everything.

It’s an “exciting opportunity for our county” that will keep the area as an example for other communities across the nation, he added.

This is a one-time opportunity to build a robust 4G and 5G network that students and public agencies can get access to, said Luis Wong, chief technology officer for ICOE. The project would use one-time funds to set up the communication infrastructure.

The project is estimated to cost $4.5 million, and $2.5 million has already been secured from local school districts utilizing some of their stimulus funding, Wong said. The authority asked the county for $2 million to finalize the funding source.

The wireless network would span from Niland to Calexico and from the Imperial Valley Desert Museum in Ocotillo to the San Pasqual Valley Unified School District in Winterhaven.

Pilot projects for this advanced technology have already been put in place, and those areas in Brawley and Calexico are already at peak capacity, Wong said. There was an uptick in March and a peak when school started in the fall.

Purchases to bring in more antennas and more capacity would start soon, and the project is expected to be completed in the spring.

As for when the funding is needed, as soon as possible, Wong said.

“We understand that the pandemic is going to be here for a while, and our children can’t wait,” he said.

The project would benefit not only the students, though they are the biggest beneficiaries at the moment, Finnell said. However, once the project is going, it will benefit all the public agencies in the county.

“This is your infrastructure as well,” Wong told the board. “We’re hoping the County of Imperial can utilize this infrastructure.”

The board was cautious about where the funding would come from, but generally supportive of the project, going so far as to tell County Executive Officer Tony Rouhotas Jr. to come up with a plan that will go before the board soon to find the funding. 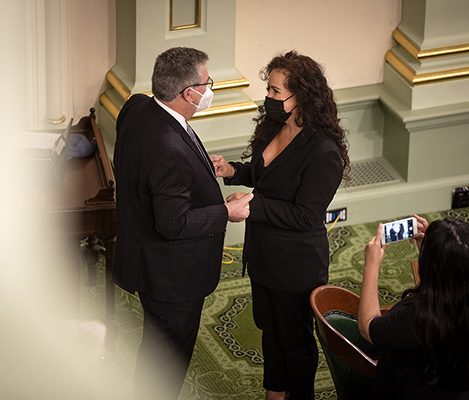