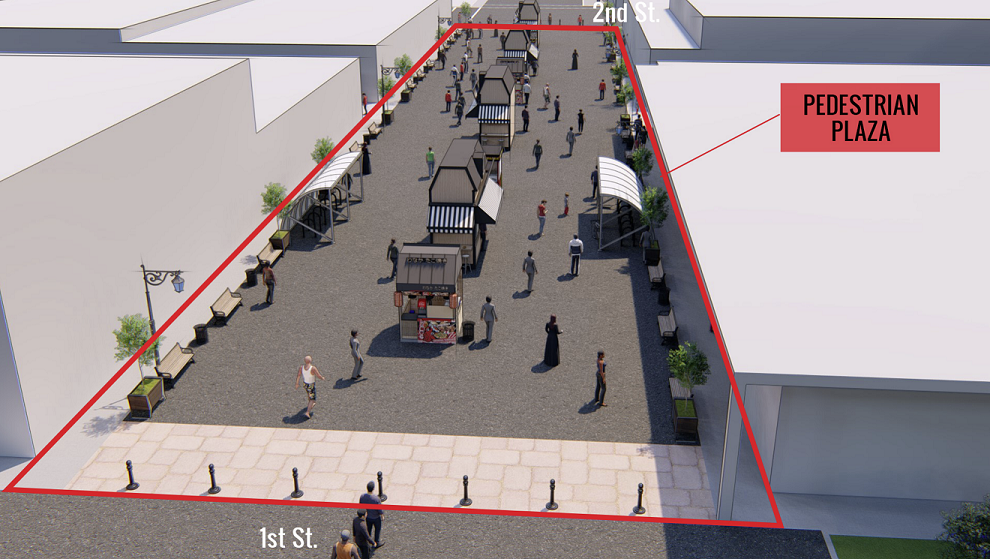 An artistic rendering of planned Rockwood Avenue Promenade shows how the city will close the street to vehicular traffic and make it pedestrian-only between First and Second streets in downtown Calexico. | COURTESY IMAGE
Home
Featured Stories
In Featured StoriesLocal News

CALEXICO — Plans for the Rockwood Avenue Promenade are now calling for a large mural to be painted on the roadway spanning between First and Second streets in the downtown.

The mural will be made possible by a $25,000 grant the city recently received in June from the Bloomberg Philanthropies Asphalt Art Initiative.

The nonprofit Calexico Arts Council is acting as the art initiative’s fiscal agent on behalf of the city and is scheduled to formally request artist proposals on Jan. 13, 2021.

Initial plans had called for the painting of the asphalt mural to get underway this year but were postponed to allow the city to re-surface the section of Rockwood Avenue where the promenade is proposed.

“We keep moving (the start date) because of the paving issues,” said Carmen Durazo, Arts Council president. “You don’t want to paint on the surface the way it is now.”

The re-surfacing of Rockwood Avenue between First and Second is scheduled for March 2021, according to a presentation city planning consultant Christopher Velasco provided to the Planning Commission during its Oct. 26 meeting.

A similar presentation to the City Council about the asphalt mural project is scheduled for later this month.

The proposed promenade will close Rockwood Avenue between First and Second streets to vehicular traffic and install benches, kiosks, and bicycle stations to help further entice patrons to the downtown area.

The Calexico art project is one of 16 that the Bloomberg Philanthropies Asphalt Art Initiative funded this year. Calexico was selected out of more than 200 grant applicants and is the only selection from California and the Southwest border region, Durazo said.

The asphalt art project’s open call for artists’ submissions is expected to close on Feb. 13, 2021, followed by a presentation of the finalist, or finalists, to the City Council on Feb. 17.

“It’ll be up to the new council to select,” Durazo said, referring to whatever changes occur to the makeup of the council as a result of the Nov. 3 election.

The city will officially announce the finalist, or finalists, on Feb. 24, according to a proposed schedule Velasco shared with the Planning Commission on Oct. 26.

In the meantime, the Arts Council has plans to reach out to local hardware stores to see if they might be willing to donate paint and brushes for the project, Durazo said.

The intent of the Arts Council has always been to have the community help paint the asphalt mural, an endeavor that has received the support of Bloomberg Philanthropies.

Because the permanent asphalt mural will require the use of a more expensive paint, Asphalt Art Initiative representatives have suggested that the selected mural’s major components be painted solely by the selected artists.

Acrylic paint could then be used by community members to paint the mural’s border, which will incorporate the geometric design of the “Border Metamorphosis” mural that had adorned the international border barrier just west of downtown Calexico and whose design also represented a friendship bracelet.

“We’ve always kind of used that,” Durazo said, referring to the “Border Metamorphosis” design that adorns a downtown business’ exterior wall. A segment of the since-replaced border barrier with the mural can also be found at Rockwood Plaza.

Bloomberg Philanthropies representatives are advocating for the whole segment of Rockwood Avenue to be closed to be painted, except perhaps for where permanent features such as kiosks are to be located.

County Board Holds Court in Calexico

“We’ve agreed to that,” Durazo said.

The painting of the site is not expected to get underway until the latter part of April.

Durazo said she is still awaiting information from the city regarding the potential placement of permanent fixtures at the Rockwood Avenue Promenade that may influence the overall design and location of the asphalt mural.

The city received a $200,000 Sustainable Communities Program grant from the Southern California Association of Governments in April 2019 to establish the promenade.

The promenade is part of the city’s Downtown Action Plan, which was adopted in early 2019 and aims to revitalize the downtown area with beautification projects and new development. 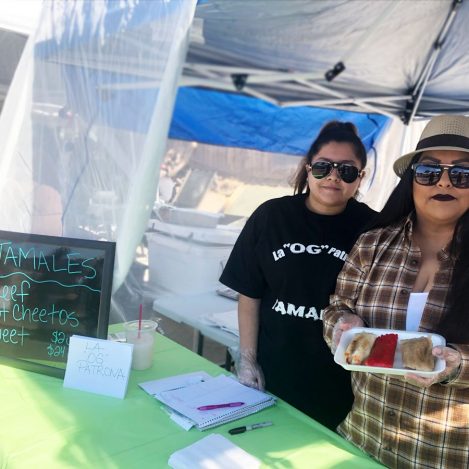