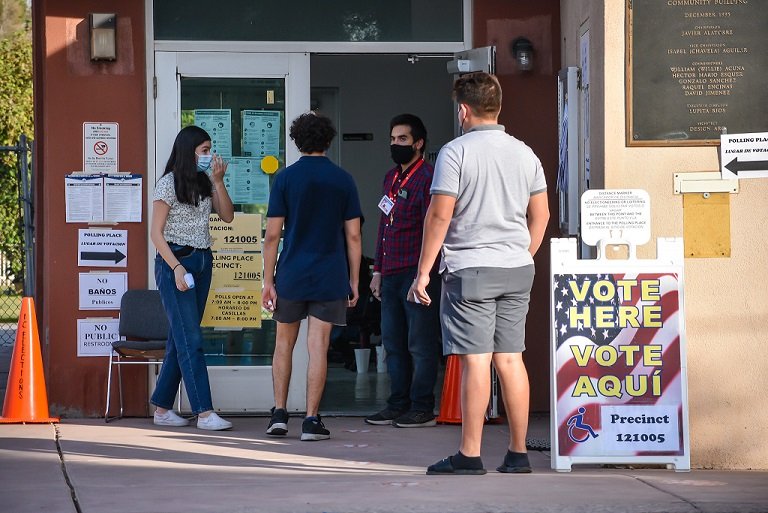 Poll workers and members of the public can be seen near the entrance to the polling site at the Mario Esquer Building at 850 Eady Ave. in Calexico on Tuesday, Nov. 3. | CORISSA IBARRA PHOTO
Home
Election Coverage
In Election CoverageFeatured Stories

Imperial County Could Be Looking at Epic Election Turnout

IMPERIAL COUNTY — Diana Magallanes’ birthday was Election Day, Nov. 3, but that didn’t stop the lifelong Holtville resident from voting. With a celebratory tiara atop her head, Magallanes headed to the polls at Holtville City Hall.

“Just because it is my birthday, doesn’t mean I won’t vote. Everyone’s vote makes a difference,” she said. “Everyone has their own opinion and has the right to choose.”

In Calexico, residents lined up 15 people deep waiting to get into the precinct at William Moreno Junior High School to exercise that choice, Jessica Herrera among them.

“All the controversy with (President Donald) Trump and (Joe) Biden make it a very important year to vote,” Herrera said.

Whether the focus was on national elections or local candidates, Imperial County residents voted in mass numbers, and it might be some weeks before county election officials get a handle on just how large this year’s turnout was.

It won’t be known until Thursday afternoon, Nov. 5, how many mail-in and provisional ballots are left to be processed — that’s when a report is expected from county officials. Even then, the county expects more to arrive daily following the election.

California counties have up to 17 days — Nov. 20 — to count incoming mail-in ballots so long as they are postmarked by Nov. 3, Imperial County spokesperson Linsey Dale said the morning after Election Day.

Imperial County has until Dec. 3 to certify the Nov. 3 General Election results.

Although officials declined to speculate, Imperial County could be looking at record turnout numbers all things considered.

“This is an unprecedented election year where it appears we are experiencing a higher than average voter turnout,” Dale stated in a Nov. 3 press release.

Earlier that morning, Dale told the county Board of Supervisors that the county returns were “already higher than most elections we’ve ever had.”

That could end up being an understatement, thanks to an executive order from Gov. Gavin Newsom due to present pandemic conditions, where all registered voters in the state were provided with mail-in ballots, whether they requested them or not.

As of the morning of Nov. 3, the county Elections Department had already received back some 28,000 ballots of the 84,000 sent out to voters — constituting a 34 percent turnout before a single ballot was even counted, Dale indicated.

With the election department’s unofficial tally updated after 1 a.m. Wednesday, Nov. 4 — which mainly included mail-in ballots received prior to Election Day and physical voting at the county’s 45 polling sites — some 19,996 votes from the county’s 84,123 registered voters had been counted, representing a 23.77 percent turnout.

And the county plans to update the count continuously, issuing new reports at 5 each day, Dale said.

While the trend was toward mail-in voting, plenty of purists wanted to use voting machines Nov. 3 to cast their ballots, and there were plenty of experienced poll workers to assist.

Elvira Silva Alvarado has been a poll worker for 15 years, and she was at Holtville City Hall, 121 W. 5th St., to assist voters on Election Day.

Most of the voters who showed up to the William Moreno precinct in Calexico were there to vote by machine as well, and many of the voters did not bring their mail-in ballots.

Rosa Cota, a first-time poll worker at the William Moreno precinct, said if voters had brought in their completed mail-in ballot, they would have been able to go to front of the line and drop them off. “The black box was for vote-by-mail ballots and provisional only,” Cota said.

Meanwhile, at the polling place in Christ Community Church, 590 W. Orange Ave., in El Centro, poll workers and voters alike were feeling the enormity of the Nov. 3 election and their place in the democratic process.

“It makes me feel good to serve the community,” said poll worker Gina Rattliff, who has served in that capacity for the past 13 years.

Offering her take on the current national state of affairs, Rattliff said: “(Former President Barack) Obama was more for the people and everybody came out to vote for him; now with Trump, the world is turned upside down.”

“I’ve always taught my children to vote because I want the right person to go in (to office),” Mary Montoya said.  “It is the right thing to do being an American,” John Randy said. “It is unique this year. Whoever is put in office will make a difference what direction the country is going to go — good or bad. Regardless, God is in control.”