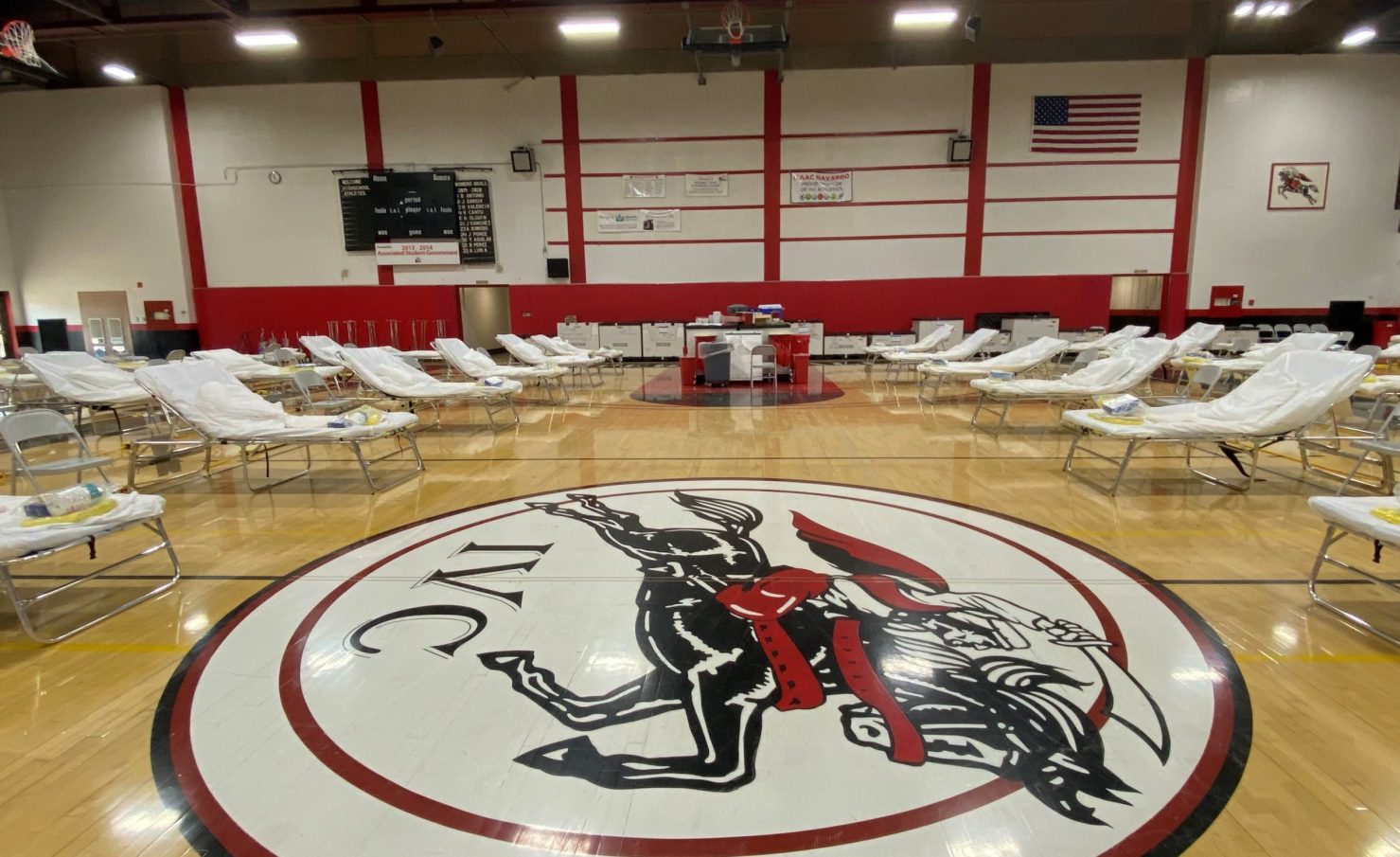 The Imperial Valley College Arabs mascot figures prominently at center court of the IVC gym in this photo of the Alternative Care Site taken in May. Campus officials are currently undergoing a process to determine whether the Arab mascot, which has been in place since 1941, should be replaced. | PHOTO COURTESY OF IMPERIAL VALLEY COLLEGE
Home
Local News
In Local News

IMPERIAL — Its origin a mystery and its presence on campus all but nonexistent, the Imperial Valley College Arabs mascot now faces an uncertain future as well.

As part of that effort, IVC representatives are asking both the campus community and the wider Valley community to complete a survey regarding their satisfaction with the Arabs mascot.

Currently, the campus is undertaking a purposefully lengthy and transparent effort to determine whether the mascot should be replaced.

The online survey, found at www.imperial.edu/mascot, poses a series of questions to prospective respondents, and is scheduled to conclude at the end of November.

Survey results will then be analyzed, presented to the Associated Student Government, various campus groups, and last, the Imperial Community College District Board of Trustees, which in December is expected to recommend a potential course of action. Plans call for the findings to be presented to the public as well.

“This is a really great opportunity to create a new legacy and for us to be able to evaluate where we are and where we’re headed,” IVC political science professor Ric Epps said. “And to have the community involved in that process is a pretty powerful thing. It could be a catalyst for change.”

Epps’ remarks came during the Oct. 29 virtual town hall meeting organized by the IVC Mascot & Identity Task Force, which was convened in August specifically for the purpose of determining the campus and community’s satisfaction with the Arabs mascot and whether it should be reconsidered.

Epps, who is the campus’ Academic Senate president and a Middle East expert, said the Arabic culture is rich in diversity and spread throughout many countries in the Middle East region.

“It would not be received very well by people in the region to know they are a mascot of a school,” Epps said.

Locally, it appears as though the Arabs mascot has its detractors as well. Lennor Johnson, IVC vice president of Student Services and Equity, said he has been affiliated with 10 colleges throughout his career and that IVC stands alone in one respect.

“I love everything about IVC, but one thing I’ve never liked is the mascot,” Johnson said during the town hall.

The campus community is also prevented from fully embracing the Arabs mascot at sports events because of its potential to upset those in attendance, he said.

“You can’t really scream out ‘Go Arabs’ without possibly offending someone on your team, if not someone else on another person’s team,” Johnson said. “I just hope that IVC makes a decision to go ahead and change it for the better of the community.”

“We were anticipating a change, so most of our teams’ (jerseys) have the word ‘Valley’ on it or ‘IVC,’” Mecate said during the town hall meeting.

References to the Arabs mascot are similarly absent from the merchandise available from the IVC bookstore, ASG President Jorge Silva said during the virtual meeting.

A quick review of the merchandise available for purchase online revealed only one item, a baseball cap, with a reference to the Arabs on it, he said.

The Arabs mascot — a man in Arabic attire and headdress, his raised right hand holding a scimitar while astride a galloping horse — was also recently removed from its prominent inclusion in the official ASG logo after a recent vote by the elected student body. The ASG decided instead to incorporate a design created by an IVC staff member.

“We believe it better represents us,” Silva said.

Survey respondents can select from a series of words and terms that they feel may best represent Imperial Valley College, as well. Some of those words include brave, resilient, spirited, commitment, honor, feared, champions, strength, and tradition.

The anonymous survey additionally asks how satisfied the respondent is with the current Arabs mascot, whether the mascot is appropriate for the college today, and whether they would like to see it changed.

Two different surveys are being used. In one case it targets members of the campus community, and in the other instance, the public.

Aside from completing the survey, IVC officials are soliciting information from the public regarding the elusive history of the Arab mascot, who is known as Omar.

During the town hall meeting, information was presented that highlighted the campus’ mascots, starting with the Imperial “Outlaws” in 1926. The Arabs mascot appears to have made its debut in 1941, according to a copy of “The Painted Desert” yearbook of that year.

“We have no idea as to how we became the IVC Arabs,” Elizabeth Espinoza, interim communications and governmental relations officer, said Oct. 29.

Those with information about the Arabs mascot history are encouraged to contact the campus at communications@imperial.edu

The nearly hour-long virtual town hall meeting attracted about 30 participants and remains available for viewing at the IVC Facebook page.

The suggested Voyagers name, Haugh said, was appropriate given the role the college plays in empowering local students to continue with a lifelong voyage of learning. A potential mascot change should also reflect the Valley’s unique culture.

“I think the students there right now should really seize upon this opportunity to help set a vibrant identity for not only who they are but who we are as a Valley,” Haugh said.