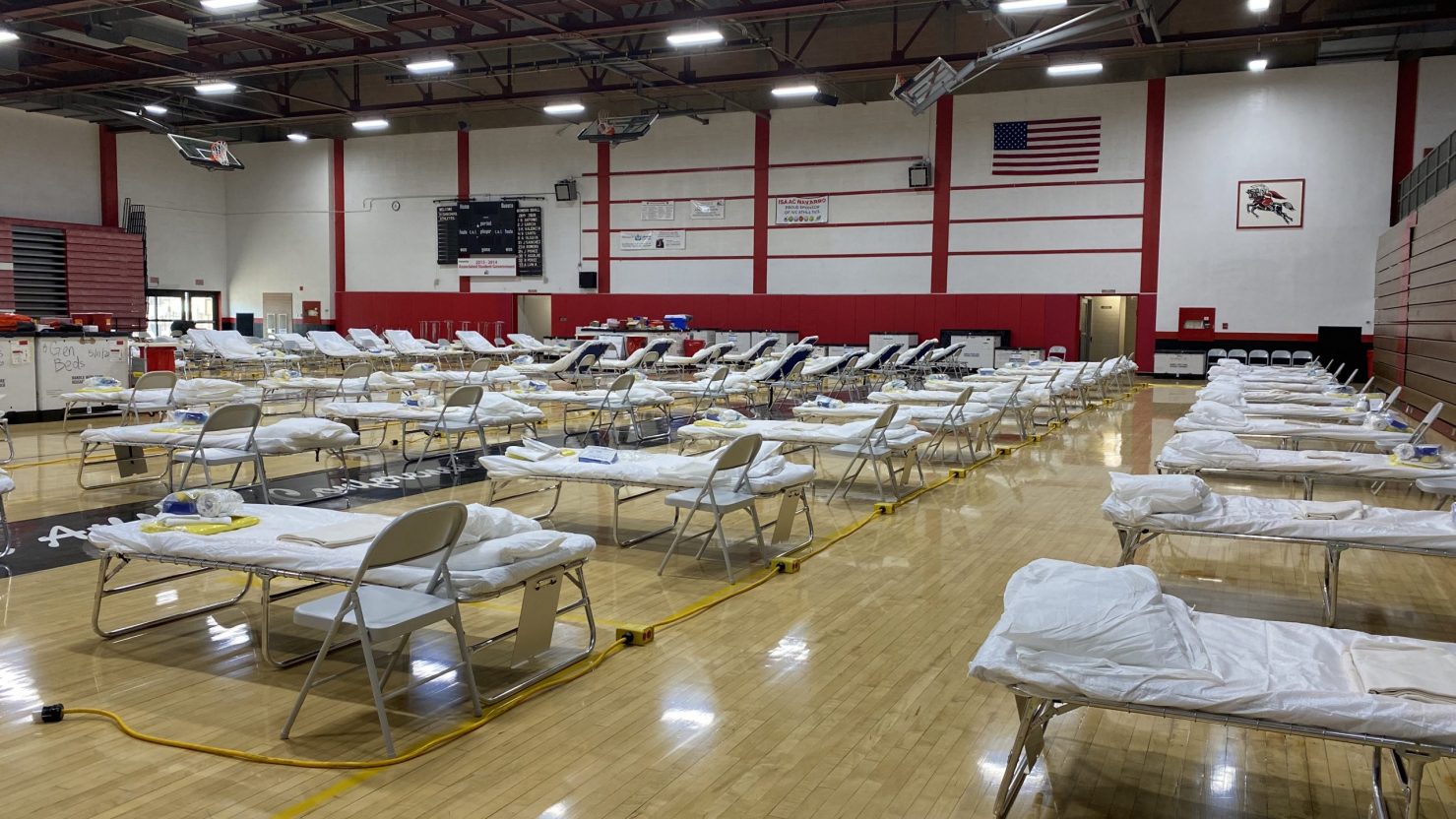 The Alternate Care Site set up inside Imperial Valley College’s gymnasium opened in May and served COVID-positive patients toward the end of their recovery. The site closed to patients in August but remains on “warm” status, meaning there is still equipment inside and it can be reopened relatively quickly. As of Nov. 2, local officials said preparations were underway to ready the facility to reopen. | PHOTO COURTESY OF IMPERIAL VALLEY COLLEGE
Home
COVID-19
In COVID-19Local News

As cases of COVID-19 increase in Imperial County and around the nation amid a month-long surge, local officials are preparing for the reopening of the Alternate Care Site at Imperial Valley College by the end of the week and county Public Health was expected to address the rise in illnesses in a press conference on Thursday, Nov. 5.

In its daily hospital census posted to Facebook, El Centro Regional had 43 COVID-positive cases of the 99 patients admitted (total capacity is 116 beds) as of Tuesday, Nov. 3. No further information was immediately available from hospital officials.

Countywide, the number of active COVID-positive cases dipped some on Nov. 3 to 421 patients, down from as many as 498 active cases on Oct. 29, according to data from the county Public Health Department.

However, arguably more significant key metrics for the county that factor heavily into whether the region can move from its current “purple,” or widespread, status, continued to head in the wrong direction.

During the Public Health Department’s weekly report to the county Board of Supervisors on Nov. 3, Dr. Stephen Munday, the county’s public health officer, said the rise in coronavirus cases was not unique to the Imperial Valley.

He said all over the country there is a “fall surge” occurring, and it will be especially important to continue to wear face coverings and practice social distancing as colder weather takes hold and more people are indoors together, where the illness can spread further.

ACS Status in the Air?

The reopening of the ACS in the Imperial Valley College gymnasium was first mentioned by Adolphe Edward, El Centro Regional chief executive officer, during a COVID update to the El Centro City Council on Oct. 30.

However, a joint news release was put out Sunday, Nov. 1, by the local hospitals, the county Public Health Department and the college stating that efforts were taking place “in case that the Alternate Care Site needs to reopen in the near future.”

The ACS has been kept in a “warm” status since August, meaning that a limited amount of equipment remained in the college gym in case there was a need to open it once again, according to the press release.

“The understanding among local and state partners was that it could reopen if the county saw a need for this additional resource. County officials are working closely with El Centro Regional Medical Center and Pioneers Memorial Healthcare District staff to review data on COVID-19 cases and plan for any additional resources that may be necessary. As new information is received, it will be shared with the community. The Imperial County Public Health Department and partner agencies will host a virtual news conference this week to provide a COVID-19 update,” the release states.

County Public Health Deputy Director Rosyo Ramirez told the county board Nov. 3 that the ACS would be on “ready” status, or be opening, “hopefully by (the end of) this week.”

In her update to the county board, Ramirez informed the supervisors that as the numbers have started to rise, county residents have sought out more testing.

Where there were once four OptumServe testing lanes among three testing sites, there is now only one remaining in Brawley, and she said that site is now at 90 percent capacity.

The free service provided by the state continues to operate from 7 a.m. to 7 p.m. Mondays through Fridays at the Brawley Senior Center, 575 J St.

Ramirez said the department is “exploring other COVID-19 testing opportunities.”

Although Munday did not say much when it was his turn to update the board, he did mention the need to continue to mask and social distance, not only as a means to prevent COVID but as a benefit to drive down cases of influenza.

He referred to the start of the pandemic locally in February/March, which was also the tail end of the last flu season. As people began to separate and don masks to protect from the coronavirus, flu cases “plummeted” in the county.

Toward the end of the update, District 4 Imperial County Supervisor Ryan Kelley asked Munday to come back to the board Nov. 10 with COVID case information out of Yuma, including case rates, fatalities, positivity rates, and other pertinent information. Kelley didn’t say exactly why he was requesting the data.

The Spread of Information

County Public Health Department officials have not had weekly media briefings on COVID for nearly two months, so it wasn’t immediately known if this upcoming press conference will be a return to timely updates on the status of the coronavirus in the community.

Since August and early September, much of the urgency that surrounded the delivery of information tied to COVID-19 seemed to ebb with the case rates in the county and the positivity percentages. As state reinforcements left the area, some testing sites closed, the ACS went on “warm” status, and more businesses began to reopen, county public health and the local hospitals communicated less often.

However, since Oct. 1, the number of COVID-positive cases in the county has been on the uptick, with daily active cases increasing from the 200s just three or four weeks ago, into the 400s the last couple of weeks, according to data on the county Public Health dashboard.

Likewise, the number of COVID cases in El Centro Regional has doubled since Oct. 1, when there were around 15 cases a day, to the low to mid-30s by month’s end. Tuesday’s number of 43 appeared to be a new high since the surges that occurred there in mid-summer, although hospital officials were not immediately available to confirm that.

According to Nov. 3 data from Pioneers Memorial Healthcare District, there were 9 COVID patients in the Brawley hospital, with three of them in the intensive-care unit.

ECRMC’s Edward and county public health officials confirmed Oct. 30 that a meeting between representatives from both hospitals and county executive office and public health communications officials was to occur that afternoon to coordinate messaging as cases of coronavirus was expected to continue to increase.

Other than the coordinated press statement on the pending ACS reopening, it wasn’t known what else that meeting will result in.

“We can’t keep this lockdown (going) forever, but every time we go out, we’re spreading it again,” Tomaszewski said, referring to why the cases are on the upswing.

Speaking specifically of the cases requiring hospitalization, Tomaszewski said people are getting sicker, and those who are elderly, suffering from diabetes and obesity, they are still the most vulnerable.

Acknowledging that flu season is here as well, he said, “this is a different animal … we’re not seeing these numbers with flu. This is serious.”

Still, Tomaszewski assured that local hospitals are ready for the sick in a way they were not during the last wave of sickness. He added there have been promising results from treatments using drugs like remdesivir and dexamethasone.

While no longer at the top of national lists, Imperial County is still among the most active regions in the country for COVID positivity, and Tomaszewski said Oct. 30 that he believes the Valley has been disproportionately affected by the illness for three primary reasons.

First, Tomaszewski said the prolonged summer temperatures have kept people socializing indoors in air-conditioning instead of being outside. He said being indoors increases the spread of the virus.

Second, he said he thinks the concentration of people living in one home has enabled COVID to spread among families, saying Imperial County households are larger than in most communities.

Third, Tomaszewski said the fluid nature of the border has allowed the virus to freely circulate between Imperial and Mexicali valleys.

While having the discussion at the El Centro council meeting Oct. 30, council member Tomas Oliva chimed in that “culture” should be a fourth factor, referring to the affectionate nature of Latino families, with greetings that often involves “hugs” and “kisses on the cheek,” he said. Olivas added that was more of a problem early on.

Tomaszewski said although the reality is that studies have shown it takes “10 to 15 minutes of close contact aerosolization to spread” the virus, he added, “unfortunately, hugging helps spread the disease.” 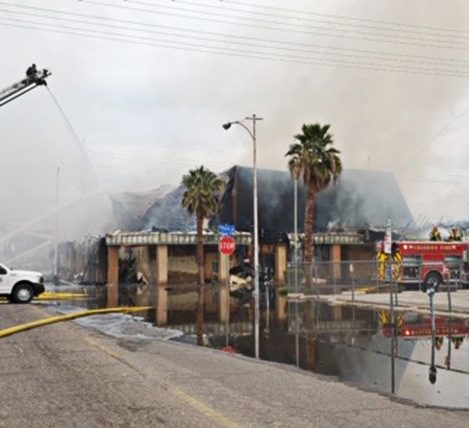