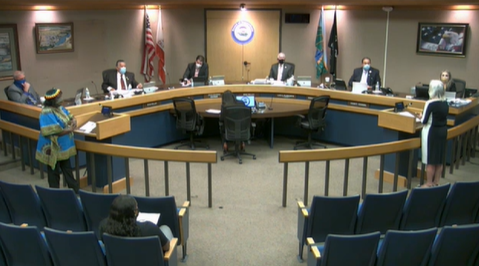 Marlene Thomas (far left in blue shirt) and Gretchen Laue (far right in back dress) with the Imperial Valley Social Justice Committee present a proposal to conduct a needs assessment of county policies and practices regarding African Americans and other disenfranchised communities during the Oct. 20 Imperial County Board of Supervisors meeting. | VIDEO SCREEN CAPTURE
Home
Regional News
In Regional News

County Board Gets History Lesson on Imperial Valley’s Disenfranchised

IMPERIAL VALLEY — There was once a school near Seeley called the Annex, where students from Calexico who didn’t speak English were bused to daily. There was also a segregated school in Brawley that no longer exists. And there was a sprawling African American community in Imperial.

Imperial County officials got a history lesson on Oct. 20 as they affirmed their support of a study looking at the needs to change policies and procedures to help disenfranchised communities.

“In the past we came here for opportunity, and our children and grandchildren have left from a lack of opportunity,” Imperial Valley Social Justice Committee chair Marlene Thomas told the county board.

She explained that a document the committee hopes to prepare with its partners at San Diego State University-Imperial Valley campus in Calexico and the University of California to study disenfranchised communities in Imperial County will end up being a historical living document for the benefit of all Valley residents.

The purpose is to provide data, identify current problems, and recommend solutions, according to Thomas. The work will go toward the development of an action plan with the county to address disparities in social, economic, geographic, political, and physical environmental conditions in order to create a fair and just society in Imperial County.

“One of the reasons this came about is the African Americans presence in Imperial County has been as early as the early 1900s, prior to the county becoming a county and the city of El Centro becoming a city,” Thomas said. “Why? The people migrated out here for jobs and opportunities; cotton, farmers, masons, etc.

“Something has happened along the way,” she added. “… African Americans have been a part of every step of bringing about a cohesive Imperial County. … We’ve been here, but what happened, we don’t know. It seems as though, for the reasons our forefathers came to Imperial County, for job opportunities and equal opportunities, dissipated somewhere along the way.

“Their children, and mine as well, left Imperial County because of an absence of jobs, the absence of opportunity,” Thomas said. “We want to explore what has happened and how do we address the needs of the African American and marginalized people in Imperial County because for whatever reason, the marginalized, that includes women, that includes Blacks, that includes even Mexican-Americans, that our needs are not being addressed. The opportunity is no longer there that most of us had fought for.”

Supervisors were supportive of the proposed plan, saying they were looking forward to seeing what the I.V. Social Justice Committee was going to do with the information it plans to gather.

“A few minutes ago, we all stood up and gave a pledge of allegiance to our flag, for liberty and justice for all,” board Vice Chairman and District 3 Supervisor Michael Kelley said. “Let’s not say it. Let’s do it. Let’s be balanced as a nation and balanced as human beings. Let’s do what we can as individuals to make the world a better and a safer place and a more just place. Equality to all.”

The board didn’t approve funding for the project, as it came before the board as an information-only item, but $50,000 would be requested at a future date to help fund the study.

Work involved in the study includes looking at historical census data and county records, as well as surveying and interviewing community members throughout the county. Those interviews are set to be performed by SDSU-IV students.

“The harms of history and the ongoing trauma has to be addressed,” said Mark Wheeler, associate dean of academic affairs at SDSU-IV.

Wheeler called the work “a much-needed and long-overdue study.”

The board also voted 5-0 to accept nearly $300,000 in funding to purchase equipment and vehicles. The money, from the U.S. Department of Agriculture’s Rural Assistance grant, provides funding to strengthen the ability of rural communities to respond to local emergencies, according to Imperial County Fire Chief Alfredo Estrada.

The funding will go toward equipment like smoke detectors, rescue saws, and portable water pumps for the communities of Heber, Niland, Ocotillo, and Palo Verde. It will also go toward replacing six vehicles that are past their safe life expectancy for emergency response. One vehicle each will be used in the communities of Heber, Niland, Ocotillo, Palo Verde, Seeley, and Winterhaven. 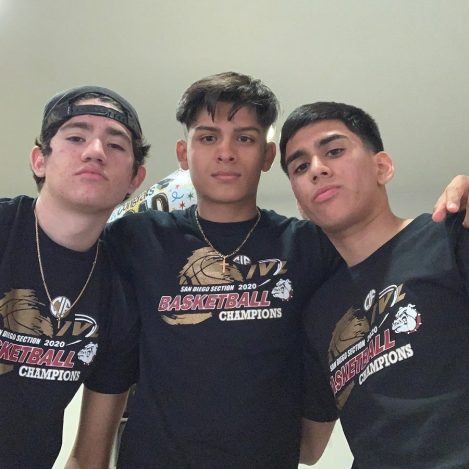 Calexico High Principal Encourages Students to be Positive About Graduation