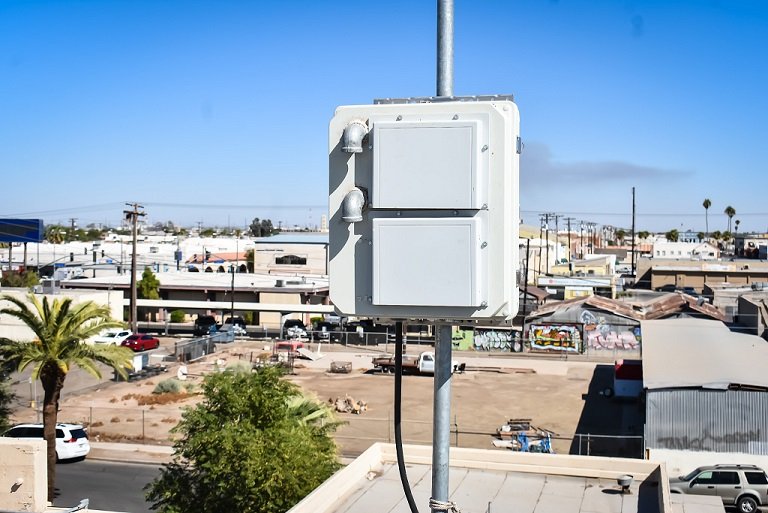 The first low-cost Dylos air pollution monitor provided and installed by Comite Civico Del Valle in the summer of 2019 sits atop the roof of the Imperial County Air Pollution Control District office in El Centro. The county air-quality office and Comite Civico recently wrapped it first year of working together as co-leads on an AB617 committee dedicated to tackling air pollution in the Valley. | CORISSA IBARRA PHOTO
Home
Featured Stories
In Featured StoriesRegional News

IMPERIAL VALLEY — Imperial Valley residents can see farmers throughout the region starting to plant their winter vegetable crops, yet those aren’t the only seeds being sown during the month of October.

Specifically, he said, the air district has recently released its first progress report for the Assembly Bill 617 community emissions reduction plan of the El Centro-Heber-Calexico corridor.

The report details the progress the air district and its partners have made to reduce air pollution through Assembly Bill 617, which was signed in 2017. The legislation allows for the development of a new community-focused program to more effectively reduce exposure to air pollution and preserve public health.

The bill directs local air districts to take measures to protect communities disproportionately impacted by air pollution. The area designated in Imperial County is a corridor that includes Calexico, Heber, and El Centro.

Some projects have already been done through the AB 617 program, Brinkerhoff confirmed.

A diesel school bus has been replaced in Calexico with a zero-emission school bus, which is also fully equipped for full accessibility, he said. A request for proposals has been issued to do another handful of diesel-to-zero emission bus trades, too.

Air-filtration projects have been provided for schools within the corridor, including both schools in Heber, he said.

“We plan to do as many schools in our corridor as possible,” he added.

Another big success has been changes made to the agriculture burn policy, he said. The maximum allowable acres per day has been reduced from 2,000 acres per day to 1,600 acres per day, and the radius from sensitive communities and on-site supervision of burns have also been updated.

“One of the biggest things we need to do is try and play a little catch up,” he said. “COVID-19 really affected our operation in the spring and summer.”

Some Air Pollution Control District staff were temporarily relocated to serve other areas of the county, he said. Now that the district is more whole as a staff, he said they were looking forward to working more toward the goals of AB 617

Upcoming projects include working with local and city planners about updating general plans to reduce the amount of air emissions within the corridor, he said. The air district is also working on getting signage around senior citizen centers and schools that would reduce idling in the area.

Those are just a couple of the project ideas floating around, he said.

Working through a program like this, with a steering committee, has been a learning curve for all involved, said Luis Olmedo, executive director of Comite Civico Del Valle, which helps guide the program along with the Air Pollution Control District.

“Do we want to see things move faster? Absolutely,” he said. “But I think the gears are there.”

The steering committee, made up of leaders throughout the community, is the key to the program’s success, Olmedo said. The more information they have, the better decisions they can make. And he’s optimistic with the way the committee is heading.

“It does require that our community steering committee be the compass, be the guide, and they have a critical role,” he said.

A lot has happened that might not be visible, like changes to regulations and enforcement, and Olmedo said he believes the program has had some good early successes. Moving forward, he added, it will be about securing other money to work on things like the air-notification system (to alert residents when dust pollution levels are high) and paving projects in the community.

Calexicans Wary of Increase in Fires

“I think moving forward we do have to kick it into high gear,” he said. “Where are we going to make these investments?”

The community-steered program is a different way of operating than the rest of the state, and it’s a great way moving forward, he said.

“We have to keep the momentum, but not leave anyone behind,” he said.

Part of that is to incorporate the north end of the county into a program like this, he said. By the end of the week, Comite Civico Del Valle hopes to have a nomination in to the state’s Air Resources Board for the north end communities that are also facing air-quality hardship.

From there, he said, it will be up to the state to decide if that area should get its own program.

A copy of the first report can be seen at http://bit.ly/ICAirReport 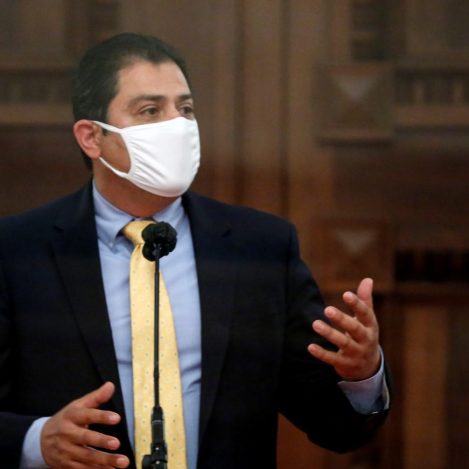