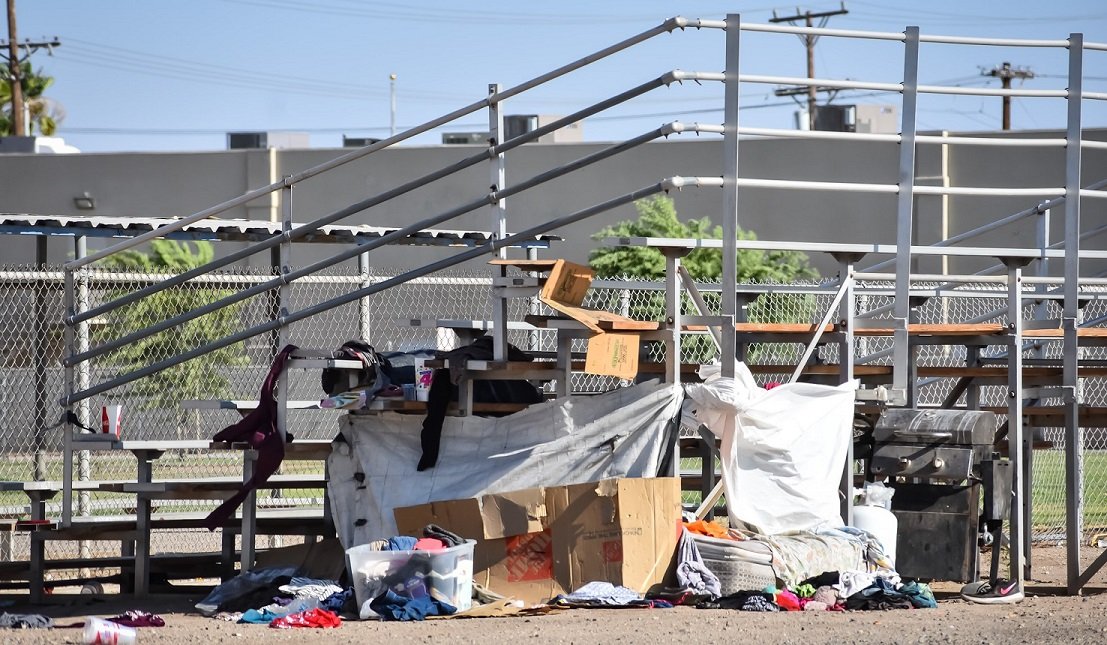 El Centro Eyes Homelessness as Continued Issue in Next 5 Years

EL CENTRO — Homelessness was a topic frequently raised by El Centro residents who took part in a community outreach survey reviewed by the council here to help shape the city’s next five years.

“The first question asked them, what needs to change as a general question and the topic that was most frequently brought up was homelessness,” said Angel Hernandez, an associate planner for the Community Development Department during a special El Centro City Council meeting on Aug. 26.

The community survey was the first topic reviewed during the five-hour long meeting to discuss a strategic planning with the council, city staff and members of the Institute for Local Government. The city has been working with Institute for Local Government since El Centro was selected among nine other cities to participate in the organization’s pilot program called BOOST, an acronym for “build, organize, optimize, strength and transform.”

“I believe that having the (meeting) facilitated by ILG added clarity because they kept us on track moving forward,” councilwoman Cheryl Viegas-Walker recalled of the meeting. “It was like having a fresh perspective on what we were trying to accomplish.”

The non-profit organization ILG has been able to provide this program to the city following a $1 million award from a previous budget approved by former Gov. Jerry Brown. The award has allowed ILG to continue to provide training and education, but in a more targeted way for local governments to receive technical assistance.

“We’re very honored to be selected as one of the cities for ILG to participate,” Viegas-Walker said. “They have extensive knowledge and expertise on strategic planning and good governance.”

“First and foremost, it was important to acknowledge the issues around homelessness and poverty because there were overwhelming concerns,” Viegas-Walker said. “If the public is telling you, ‘hey this is really important,’ then we need to listen.”

A total of 208 responses from the community were collected in English and Spanish from November 2019 to May 2020 in preparation for discussing the results of the finding during the strategic planning retreat, explained Hernandez, the city’s associate planner. Of those responses, 85 percent represented El Centro residents and 5 percent came from residents living in surrounding cities.

Homelessness was identified as an “issue that needs to be addressed” by 67 percent of those surveyed. The special meeting also gave the council the opportunity to identify specific challenges the council felt the city would likely face in the next five years.

Poverty was the first challenge raised by the council during their brainstorming exercise at the special meeting. Other issues involving unemployment, summer weather, lack of access to healthcare and economic development were also suggested.

“Homelessness continues to be a priority to the city,” El Centro Mayor Efrain Silva said. “We are a part of the continuum of care that addresses this issue with a holistic approach.”

The results of the community survey were followed by a discussion on the city’s values and discussed six goals the city would like to focus on within the next five years.

“A major focus of our city is economic development and the creation of jobs,” Silva said.

In response to the concerns raised in the survey, the council organized goals for the city, which included the enhancement and investment in local infrastructures, improvements to transportation and mobility, community health, safety and welfare, recreation and lifelong learning, city beautification, community engagement and civic pride, along with economic and community recovery and business development.

Although the council did not provide specific examples of these goals, they were able to establish their main focus as they prepare to meet for two more sessions this year with IGL and city staff to continue to formalize the specifics of the five-year goals. These goals are expected to be completed by December.

Following the goals, each council member and a few city staffers also brainstormed one-word values that would best represent the city. The words happiness, compassion, economic opportunity, sustainability, respecting and celebrating cultural diversity and inclusion were all among those used to describe the community.

The retreat also saw council members revise the city’s current vision statement and mission statement. The ideas collected provided the staff with revised statements that will be redrawn to make the statement shorter and more concise in upcoming meetings.

“There will be further forums for the community to make an input on the strategic planning,” Silva said. “We welcome all comments especially from our Spanish-speaking residents.”

As city staff continue to work to establish viable projects, activities and programs involving their goals, Silva also hopes the community takes a proactive approach in discussing their concerns or desires for the city’s future.

“This is the city of El Centro’s strategic planning retreat, not the councils,” Silva said. “We welcome input.”

An Essential 5: Workers Rely on Resiliency During Pandemic