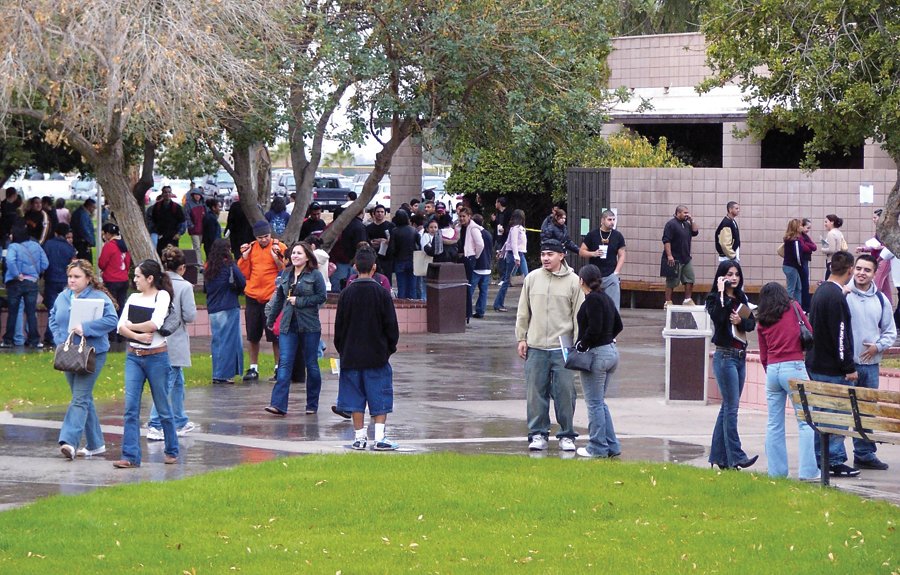 A crowded quad area at Imperial Valley College is shown before the COVID-19 pandemic shutdown the campus this past March. | PHOTO COURTESY OF IMPERIAL VALLEY COLLEGE
Home
Regional News
In Regional News

EL CENTRO — Homeless with no financial support expected from his parents, one Imperial Valley College, IVC, student has had to stay on top of online courses all while in the midst of the coronavirus pandemic that has subsequently shut down most public spaces.

“I struggle daily to find safe places to sleep, and even the places that I can find are still terrifying because they are out in the open where anyone can walk by or approach me at any time,” said the IVC student who asked that his name not be used in this story.

Most public restrooms have become nearly nonexistent during the pandemic due to the potential and fear of contracting the coronavirus. Other spaces students once flocked to have also stopped permitting guests from sitting inside, like coffee shops and public libraries.

“There are no more public restrooms or port-a-potties open at all anymore and it’s very difficult to find a business or establishment that is open or willing to let me into their restrooms at all, not even for a couple of minutes,” the student said of his daily struggle. “I fear that one day I am going to get caught by a police officer for going to the restroom in public.”

Without even an ice chest to store cold meals, the student has had to choose meals wisely.

“Everything I buy must be ready to go at that moment,” the student said. “I can’t even buy fast food because I don’t have a car to go through the drive-through windows in and most places won’t let me inside to order.”

In a recent IVC student survey, about 210 students self-identified as being homeless or at risk of experiencing homelessness. Recently, the college and the city of El Centro moved forward with plans to partner to provide grant-funded tiny homes off campus for such students.

“Many college students are living with friends, in their car, or even in trailers that do not have electricity or plumbing,” a formerly homeless IVC student said. “There are many unforeseen obstacles IVC students must face.”

The 23-year-old sociology and social work major spent her freshman year homeless with her brother.

“At the time, we did not know we were homeless … we were staying at a friend’s house,” she said. “By our definition, we had a place to sleep. Therefore, we were not homeless.”

Although no longer homeless, the 23-year-old explained how she and her brother pushed forward in their education despite concerns about where they might sleep or eat each day.

“Most people are unaware that there are students who have no permanent home and move around finding a place to stay,” she said. “All this, in order to continue their education.”

The struggle to maintain college courses while surviving on their own was no easy feat, but she did find comfort not only in friends, but in the resources IVC staff members were able to provide her and her brother during their most difficult times.

“When you are struggling it is hard to ask for help, it is also hard to admit that you need it,” she said. “I want students to feel like they have a chance at success because they’re destined for so much more than they know.”

Thankfully, the dream of providing a safe living area for IVC students suffering from homelessness will soon be a reality by the start of the spring semester following the city of El Centro’s grant funding award.

“That makes me really proud to be able to provide this service to our students that have experienced tremendous barriers,” Imperial Valley College President and Superintendent Martha Garcia said during an Imperial Community College District Board of Trustees meeting Sept. 16.

Gov. Gavin Newsom awarded the city of El Centro some $3,024,114 in Homekey grant funds to assist in the construction costs of 13 tiny home duplexes. The new homes would provide two years of permanent housing and supportive services for 26 homeless IVC students, according to an El Centro City Council agenda report on the project.

“This tiny home community will primarily house homeless youth who are pursuing higher education at IVC because they believe that through education their lives will change,” Garcia said. “Collectively in Imperial County, we are committed to helping those that have the greatest barriers in life.”

The city of El Centro requested the grant funds in collaboration with the local college and the Imperial Valley College Foundation to develop the project on vacant city-owned property at 1998 N. 12th St. on the corner of 12th Street and Bradshaw Avenue, south of Lowe’s retail store, according to the agenda report.

Lotus Living, Rise Above Resilient Community will be the title of the tiny homes project located less than five miles from the IVC campus and in close proximity to local stores including Target, Aldi, Costco, Walmart, and Food 4 Less.

“The combination of unemployment in the Valley and affordable housing impacted us tremendously and our educational journey at IVC was hard to achieve,” the 23-year-old formerly homeless student said. “But through programs like the Lotus Living, many students with similar stories can now have a place to live that empowers and encourages them to continue their educational journey.”

The grant will pay for the construction of the project and fund its operational costs for the first two years. The installation of 13 tiny home duplex units in the community will make up 26 homes each about 340 square feet and will include a kitchen, restroom, bed, desk, closet, patio and washer and dryer stacked units, according to the project report.

A conceptual site plan of the project also shows a pedestrian pathway for each unit, a parking lot with 27 parking spaces, lighting, and the installation of generous landscaping throughout the project site. Additional improvements involve the installation of the tiny home modular units and the proper connection to utilities such as electricity as well as water and sewer onsite, the agenda report notes.

Construction on the project has tentatively been scheduled for Oct. 6 through Dec. 31. As per grant guidelines, the state will advance a check to the city in the amount requested and the city’s goal will be to expend the funds and provide the deliverables to the state by Dec. 30.

“Homekey is the first effort of its kind in the nation and is a once-in-a-generation opportunity to protect the most vulnerable people in our state,” Newsom said in a press release regarding the Homekey grant awards on Sept. 16.

The city of Calexico is also building out a Homekey project at the former Hollie’s Hotel on Imperial Avenue, where it will partner with a developer to provide senior and homeless housing.

With such a sizable number of students self-identified as homeless attending IVC, the project would serve students with extremely low levels of income and would prioritize serving former foster youth, according to the project details.

“These new homes will provide a safe and encouraging atmosphere, where students can surpass their hardship,” the former homeless IVC student said. “I hope this will alleviate all the stigma associated with homelessness.”

As part of the lease agreement between the city and the IVC Foundation, the foundation will be accountable for the long-term maintenance and operation of the housing site for 55 years. During this time the city will continue to own the land and housing units, while the college will be responsible for providing onsite and offsite case management and wrap-around services for the students who will be residing at the facility, according to the project’s agenda report.

To rent out a tiny home, students will have to pay an estimated $200 per month and be required to complete 10 hours of community service maintenance work on the premises each month as part of their rental agreement, according to the report.

“I’m extremely grateful to the city of El Centro for applying for Homekey funds to create this dream,” Garcia said.

The Homekey grant, administered through the California Department of Housing and Community Development, will award the city of El Centro with $3.2 million, including a 24-month operating subsidy in the amount of $199,557 for operational costs, according to reports.

California’s new Homekey grant gathered its $600 million in funds by deriving $550 million of it from the state’s direct allocation of the federal Coronavirus Aid, Relief, and Economic Security Act, also known as the CARES Act, the $2.2 trillion economic stimulus bill, and $50 million is derived from the state’s general fund, according to agenda reports.

In response to the grant award, the El Centro City Council approved two items in relation to the Lotus Living project on Sept. 15. The first was a resolution providing the city manager authorization to sign the standard agreement and any other necessary contracts related to the tiny home project. The second allowed the city to advance $460,000 from its general fund to start purchasing the project’s tiny home duplexes, which will be refunded back into the city once the grant award is received.

Given that the grant required the project to be completed by Dec. 31, the city’s cash advance was necessary to pay a 50 percent deposit, which was due by Sept. 30 to ensure construction meets scheduled deadlines, according to agenda reports.

“A house is a basic need that unfortunately not everyone has,” said one 18-year-old IVC student, an El Centro native experiencing homeless who also asked to remain nameless. “Not knowing where you will sleep the following day was a huge stress that took over your mind.”

Like several other IVC students, the 18-year-old has also been impacted by the lack of affordable housing available in the Valley, recalling how she spent her first semester often thinking about where she was going to sleep the next day, finding money to pay for a motel and trying to figure out how she was going to be able to make it back to class without a car. These stresses were only increased with her studies.

“Having those stressful thoughts made me feel really down,” she said. “While going through that and working to have an education, it was a tremendous struggle and it really set me back on my first college year.”

Today, the 18-year-old is looking forward to the new housing project and hopes other self-identified homeless students at IVC will be able to focus on their education without having to worry about where they will stay the night.

“If there is an opportunity to bring homes to those in need, especially students who are trying to better themselves, I believe it would be an important and helpful impact.” 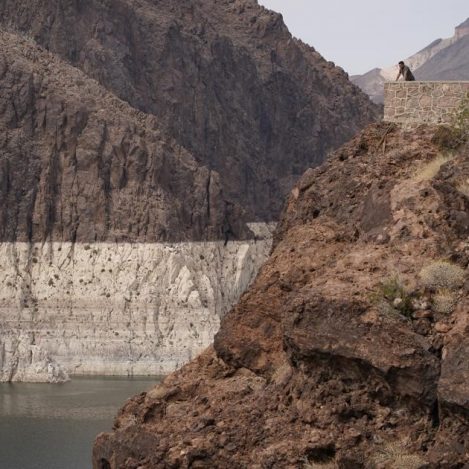