Photo one (from left) is from the Sept. 18 carjacking call in which two 17-year-old males from Brawley were arrested. The second photo from the shots fired call that came in at 4:23 a.m. Sept. 19. The third photo is from the last call, at 6:30 p.m. Sept. 19. | PHOTOS COURTESY OF CALEXICO POLICE DEPARTMENT
Home
Local News
In Local NewsPublic Safety

Calexico Cops Get 3 Guns Off Streets in 3 Cases

During a 24-hour period the Calexico Police Department took three firearms off the streets and arrested four individuals, including two teenage carjacking suspects, in three separate incidents, according to a news release from the city’s police chief.

“In our case here, the determination by the police officers and good old-fashioned police work is what the officers did to get these illegal guns off the streets, making it a safer community,” Police Chief Gonzalo Gerardo said Sept. 22. “Although we’re short-staffed, we’re doing the best we can with what we have. It shows the loyalty these officers have.”

Starting Friday, Sept. 18, at 9:25 p.m., the department received a report of a carjacking in the 900 block of Rivera Avenue of a taxicab. The cab was called in Brawley by two males who wanted a ride to Calexico. As soon as they arrived in Calexico, the two males pulled out a handgun, stole the cab driver’s wallet, cell phone and cab, according to the Sept. 22 press release.

Police searched for the cab and the suspects throughout the night. At 11:10 p.m., the cab was found in the 1200 block of P. Rashid Street. Officers canvassed the area and concluded that the suspects were in the area of the 700 block of H. Ramos Avenue. Officers contacted our local taxi company and told dispatchers there about the incident, and that if anyone asked for a taxi in that area to call the police, the release stated.

At 7:38 a.m. Sept. 19, Saturday, a cab was called, and an officer sat in the passenger’s seat of the cab to go pick up the fare. When the cab and the officer arrived, one of the suspects approached the cab. The other suspect soon followed.

Both suspects were detained and arrested, according to the release. A gun was found, and the cab driver’s property and evidence were recovered. The two suspects were 17- year-olds from Brawley, both of whom were arrested on suspicion of conspiracy to commit robbery of a taxi and carjacking. Both counts are felonies, the release stated.

During this same time of this investigation, at 4:23 a.m. Sept. 19, the Calexico Police Department received a call at 621 Emilia Drive regarding shots being fired. Officers responded to the residence to find the suspect had left the area. At 11:35 a.m., officers were called back to the home and arrested a 24-year-old suspect, Alfonso Alberto Alvarez of Calexico, according to the chief’s release.

Finally, at 6:30 p.m. Sept. 19, officers were dispatched to Second Street and Paulin Avenue about a subject asleep in a vehicle. Officers arrived, and upon approaching the vehicle, officers noticed that the driver, later identified as Mark A. Rivera, age 58, who appeared to be intoxicated, Gerardo wrote in the release.

As the officers contacted the subject, they saw some ammunition lying near the foot pedals/floorboard area. Officers took Rivera out of the car and found a loaded .45-caliber pistol, large knife, cane sword, and syringes with possible heroin liquid in them. 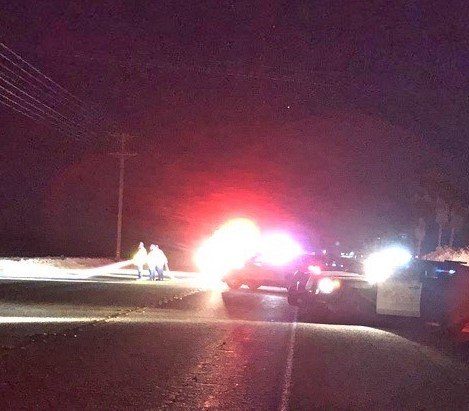 Transient Killed by Semi-Truck on Highway 98 East of Calexico