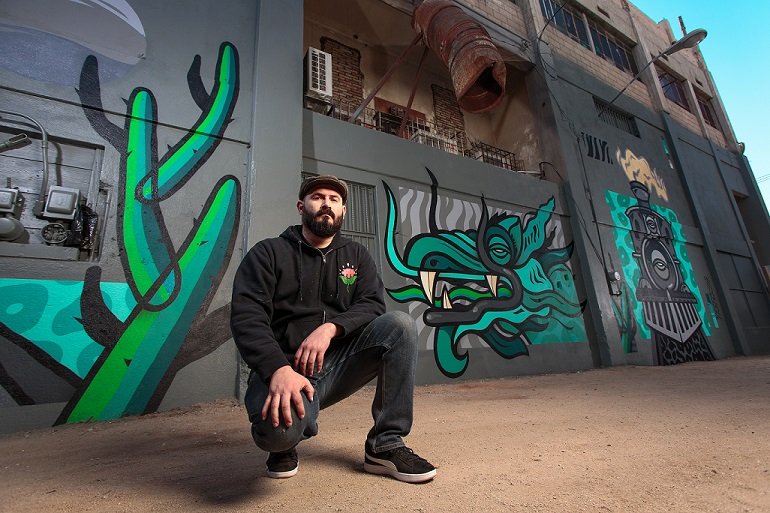 IMPERIAL VALLEY — As is par for the course in the graffiti world, the art is long known before the artist, especially when a style is as distinct as that of Star27.

His faces are his calling cards, with their perfectly circular yet sleepy eyes. Big, black, bold lines and solid, bright, cool colors are his signature. The work is often unmistakable and almost always unforgettable.

The Mexicali born and bred graphic designer and self-proclaimed graffiti painter (he loathes the title of artist) has developed a unique approach over two decades of tagging walls and putting up murals throughout Mexico, Imperial County, and other areas of Southern California.

Varela, a former Imperial Valley resident living in Temecula and co-founder of the Starts with Arts Foundation, discovered Star27’s work before he became friends with the man, who he’s known for about seven years but admired even longer through his distinctive pieces.

“I always knew it (Star27’s work) from seeing it in the streets,” said Varela, who is also a graphic designer. “His unique style was always so fresh. I hadn’t seen anything like it before outside Imperial Valley.”

Most of Star27’s work, probably 85 percent of it, lives on walls in alleys and on murals in Mexicali, with a number of organic and commissioned pieces in the Imperial Valley as well. As his brand grows, there has been a demand for his work.

“The culture is different. Calexico and Mexicali, I know they are sister cities, but Mexicali is more accepting of these types of things, more open to graffiti,” the 37-year-old freelance designer and painter said, who uses mostly spray paint to create his crisp and complex designs.

Since losing his job as a graphic designer in the Imperial Valley due to COVID-19, Star27, whose real name is Etelberto Ortiz Aguilar, also known as “Beto” or “Betones” to friends, has been making a living on commissions throughout the region.

Beto is a former designer at Jacob Zavala’s El Dorado Printing and Embroidery in El Centro and has worked with the Zavala brothers at their Bujwah clothing shop and formerly worked for the late Brett Driscoll at Driscoll’s in El Centro.

Back in February, Beto put up a dragon and train in an alley in Barrio Chinesca in downtown Mexicali, the historic Chinatown area of the city. The dragon is a traditional symbol in Chinese culture, and the train is likely a tie to the work that brought many Chinese immigrants to North America in the first place, which was to work on the railroads in California and the west.

Beto said he gets called for about one commission a week now, but still gets out there and regularly hits walls for free to keep sharp and try new designs. He finds that his work has become more sought after on office buildings, storefronts, breweries, and other new ventures in Mexicali.

In Imperial County he has done some pieces in recent months that he’s proud of, including his stylized take on Mount Signal in a mural on Calexico’s Three Greens Collective cannabis dispensary and a series of murals he started at Las Palmas Swap Meet.

During the COVID closures, Beto started what will ultimately be five pieces at Las Palmas, Calexico’s 50-plus-year-old swap meet. When the business opened Sept. 16, vendors and patrons got to see some of Star27’s work on the two-story office building/restaurant.

He painted a desert scene on the staircase leading to the second-floor office space, a stylized heart logo for Las Palmas that the swap meet plans to put on T-shirts, and a hand and cactus on another wall.

“I’m pretty sure people are going to like it. Las Palmas is a historic spot in Calexico,” Beto said. “I’m excited to get feedback from the people.”

Las Palmas operations manager, Chris Martinez, said he was introduced to Star27’s work by his younger brother, Kevin, who is into underground art and music.

“We’ve been wanting to do something like that for the longest time,” Martinez said of bringing in some unique design elements.

Star27 realizes his designs are appreciated. In addition to painting on the walls of businesses, he also sells his designs through a series of stickers, enamel pins and apparel on his website, www.star27mxl.com/products.

Married to El Paso, Texas, native Olga (Beto is a naturalized U.S. citizen), he is a father to two boys, 5-year-old Etelberto Jr., or “Betito,” and newborn, Saul, who came along just two months ago.

The family man is no stranger to marketing himself and his work, and he says he enjoys the hustle and getting outdoors, even in the Mexicali heat, to paint.

He said that he would like to branch outside Mexicali and begin to take his designs to other parts of Mexico. So far, he’s done some pieces outside Mexicali, but he wants to travel more to Guadalajara and Mexico City.

A student of graffiti, friend David Varela said Beto is knowledgeable of what has come before him and where he is taking graffiti as an artform.

Recently, Beto became one of the newest members of HEM (Hecho en Mexico), the country’s oldest graffiti crew with some 35 years of history behind it. Beto is one of about 14 graffiti artists in the collective.

HEM members will be featured in an art show Oct. 9 at the Baja Swim sports club in Mexicali, where Star27 has done numerous murals and paintings in the past. He said half the featured artists will be from Mexicali and half from Tijuana.

Beto lives to paint, plain and simple, and is proud of the style he’s perfected that “looks like a sticker on the wall.”

He believes his style is appreciated because it is recognizable as all his own, something he has admittedly worked hard to achieve.