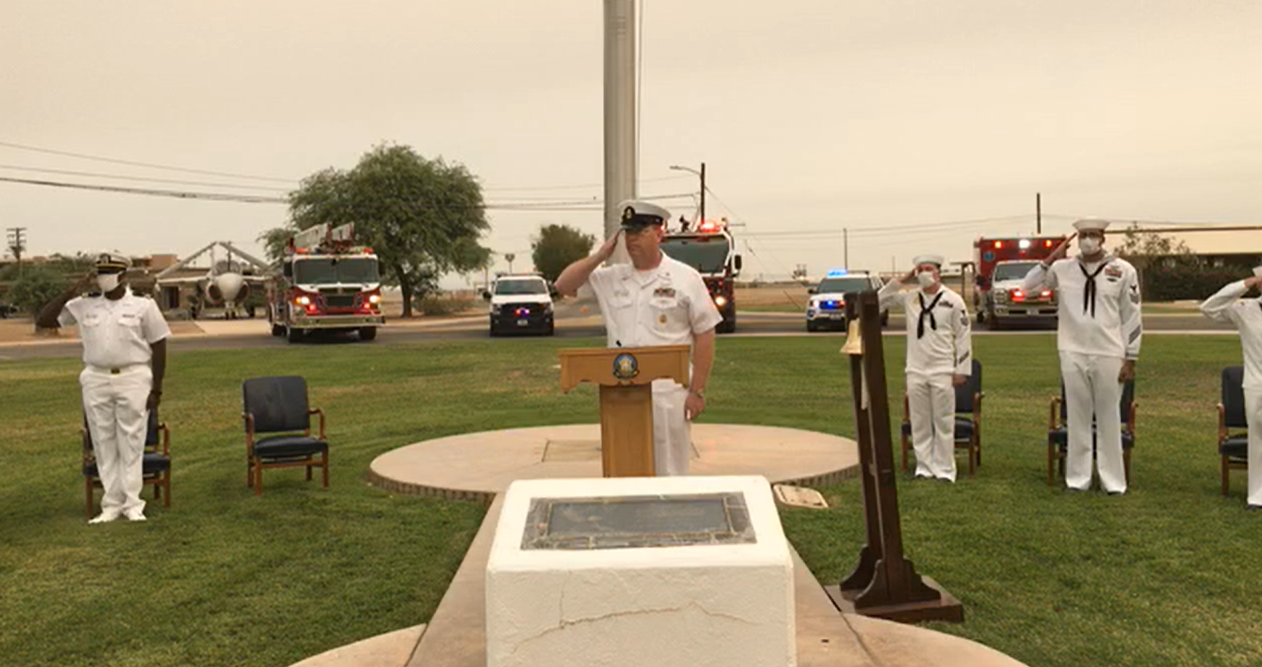 With emcee U.S. Navy Command Master Chief Eric Hubert standing at the center, Navy personnel stationed at Naval Air Facility El Centro salute during the playing of “Taps” to memorialize those who lost their lives during Sept. 11, 2001, during a 9/11 ceremony at the base Friday morning. | VIDEO SCREEN CAPTURE
Home
Local News
In Local News

Emphasizing a country’s resolve to act, against the war on terror that began in earnest on Sept. 11, 2001, when hijackers killed some 3,000 people, or against COVID-19 that threatens Americans today, the commanding officer of Naval Air Facility El Centro paid tribute to the fallen and those still fighting to protect the nation.

Delivering a passionate address at the foot of the “command flagpole” near the entrance of the base, where federal and local fire and emergency response vehicles could be seen with their light bars flashing in the background, U.S. Navy Capt. William “Bill” Perkins spoke of the resolve its takes to respond to tragedy and continue to serve the people.

“The U.S. Navy has always faced challenges” but stood, Perkins said, with “the same readiness and resolve (with which the nation) faced the fire on 9/11 and rushed toward the sound of the explosions to pull people from the wreckage.”

The nation remained steadfast with “the same resolve we as a Navy showed in fighting the hellacious conditions aboard USS Bonhomme Richard to save that ship,” Perkins said, referring to the July 12 fire started aboard the ship ported in San Diego.

“Or that our Navy firefighters are facing today standing shoulder to shoulder alongside Imperial County firefighters helping the state as wildfires rage and threaten lives,” he said.

“The same resolve our security force shows every single day, standing the post in near 120-degree heat, keeping us all safe,” Perkins continued. “The same resolve every Navy spouse shows for their loved ones deployed around the world.

“And the same resolve we must all show to prevent the spread (and bring about) the eventual defeat of the novel coronavirus pandemic which still impacts our local community and around the nation,” Perkins added.

The base ceremony, some seven miles west of El Centro, got underway at 8 a.m. sharp under overcast skies, darkened by cloud cover and the smoke from the Valley Fire burning in San Diego County.

A somber event, emcee Command Master Chief Eric Hubert reminded those watching live via Facebook of the lives lost 19 years ago, including the 2,996 people killed when 19 terrorists hijacked four airliners, crashing two into the north and south towers of the World Trade Center, the Pentagon in Washington, D.C., and a fourth plane that passengers bravely took back from the hijackers and downed in a field near Shanksville township in Somerset County, Pennsylvania.

Hubert reminded that some 6,000 people were injured that day, and that America was not alone in its suffering.

“This was not an attack on the United States, it was an attack on innocent people around the world,” he said, adding that citizens from 90 countries lost their lives on American soil on 9/11.

Hubert added “today we mourn” the 343 firefighters who lost their lives in the attacks, including one chaplain, two paramedics and 72 law enforcement officers.

Base chaplain, Lt. Chancellor Jenkins, provided a spiritual message with both the invocation to open the ceremony and a benediction that closed the proceedings, which was followed by the playing of “Taps” by the NAF El Centro Honor Guard member Petty Officer 1st Class Ehrmar Macaraeg.

“Thou art with us … our prayer remains, stand beside us, and guide us, through the night, with your light, from above,” Jenkins said, drawing from the lyrics of the national anthem, “Star Spangled Banner.”

The ceremony lasted about 25 minutes in all.

One of the more powerful moments was base personnel reading off the 31 names of U.S. Navy servicemen and women who were killed in the attack on the Pentagon in D.C.

Capt. Perkins summed up the ceremony and the day best, when he said, “This was an attack on our homeland, against our nature … Today, we remember those lost that day (and) draw inspiration the way we continue to carry that torch.” 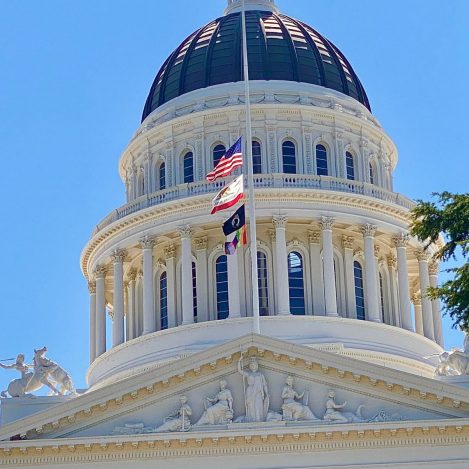