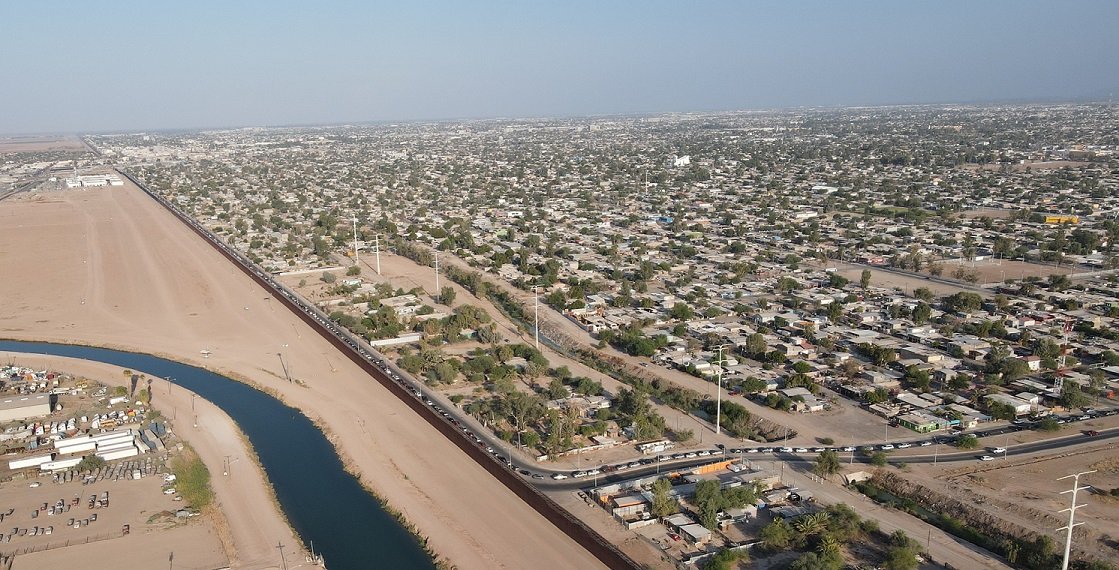 An aerial drone shows the backed-up traffic trying to enter the United States through the Calexico West Port of Entry around 5:45 p.m. Aug. 23. Customs and Border Protection on Aug. 21 quietly undertook a new policy slowing nonessential travel into the U.S. to limit COVID transmissions at Calexico and San Diego-area ports of entry. The actions snarled northbound traffic for up to eight hours in Calexico, officials said. | ANGEL ESPARZA PHOTO
Home
COVID-19
In COVID-19Featured StoriesLocal News

CALEXICO — Imperial County and Calexico officials were caught off-guard over the weekend when border-crossing wait times coming into the U.S. reached up to eight hours.

This caused some government and private sector employees to be late or miss work altogether, said District 1 Supervisor Jesus Escobar, who fielded calls over the weekend from Imperial and Mexicali valley residents caught up in the traffic at the border. And the San Diego and Imperial Valley region seemed to be the only border crossing regions caught up in trouble over the weekend.

“It’s incredibly unfortunate because it’s affecting a lot of people who are crossing the border for essential and nonessential purposes,” Escobar said. “Sunny San Diego may be going through a heatwave, but 85 (degrees) is much different than 115, especially with our humidity levels at 20 or 30 percent, which makes our heat index that much higher. So, we need to be very stern and very aggressive with our elected officials at the federal level.”

The Imperial County Board of Supervisors is putting together a group to address federal officials to try and get answers as to how long this increased inspection is going to last.

Border officials say the action is designed to reduce the spread of COVID-19, but they had a strange way of announcing the move. No prior warnings were sent out to local or county officials, no press releases or media advisories were issued.

The new changes were simply adopted, leaving local officials and members of the media to try to find their own answers over the weekend, and hear reports of the northbound traffic stacking up starting Aug. 21.

Several inquiries were sent to Customs and Border Protection spokespeople at the local and regional level. The Calexico Chronicle was finally able to get a statement from a regional spokesperson late in the day Aug. 24.

A recent survey of more than 100,000 travelers on the southwest border found that the vast majority of cross-border travel by U.S. citizens and lawful permanent residents is for purposes that are not deemed essential, according to a Customs and Border Protection spokesperson.

“In order to reduce the risk of further spread of COVID-19 in the United States, CBP is adjusting operations at select ports of entry on the Southwest border to assist with the reduction of the movement of nonessential travelers,” according to the spokesperson. “In the San Diego region that includes San Ysidro, Otay Mesa and Calexico West crossings.”

“We need people to think twice about nonessential travel and to ask themselves if the travel is worth risking their lives and the lives of others,” according to the spokesperson. “Mexico continues to experience spikes in positive COVID-19 cases along the Southwest border, and it is our duty to do everything we can to protect our nation, including educating citizens and even discouraging non-essential travel to Mexico.”

Supply chains, including trucking, are not subject to the temporary travel restrictions, according to the spokesperson.

Lines crossing the border over the weekend stretched to seven to eight hours on the night of Aug. 22 and six hours on Aug. 21, said Calexico Police Chief Gonzalo Gerardo.

“For us it’s good and it’s bad,” he said on Aug. 24. “It keeps people who shouldn’t be coming across from coming across, but it hurts our essential workers, like farmworkers, doctors, nurses, healthcare workers.”

The city of Mexicali instituted similar measures on southbound traffic in early July, which continues as an effort to limit the spread of COVID there.

For southbound travel, the city of Mexicali is continuing its southbound inspections every Friday through Sunday, Gerardo said. However, although it, too, initially caught local officials by surprise, it is manageable at this point. Calexico has enough traffic controllers out and southbound traffic, even at its heaviest, is only backing up to Grant Street and Cesar Chavez or Grant and Imperial Avenue.

Gerardo added that people are avoiding southbound travel over the Friday through Sunday period.

Some couldn’t avoid the traffic concerns heading north over the weekend.

One example is CR&R, which provides trash services to some communities in the Valley. The company had seven employees who were four to five hours late, said Victor Carrillo, who was representing the Calexico Chamber of Commerce. The former county supervisor shared concerns at the Aug. 25 Board of Supervisors meeting.

He asked that the board address federal officials about the need in the Imperial Valley to get people through the lines quickly.

“We have triple-digit weather five months out of the year,” he added. “(After) 20 minutes we used to protest. When it became two hours, that became the norm. But now, six to nine hours, that’s inhumane. We can’t put our residents and the people that live in both Imperial and Mexicali valleys under those dire conditions.”

The San Diego Union-Tribune reported that several drivers dozed off in their cars or abandoned their vehicles to find restrooms after eight hours of waiting. An 87-year-old woman suffered a heart attack and died Aug. 23 in her car while waiting to cross into San Ysidro, according to Tijuana police. A handful of vehicles ran out of gas and one car engine caught on fire during the weekend implementation of the new measures. 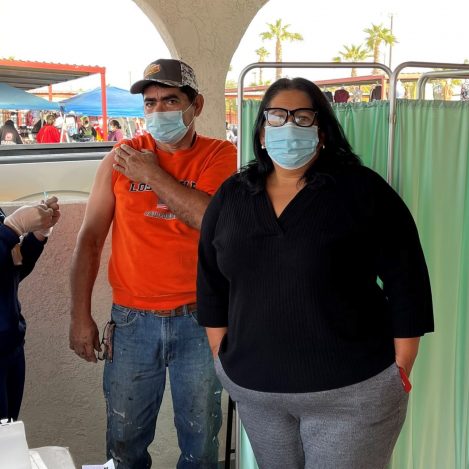