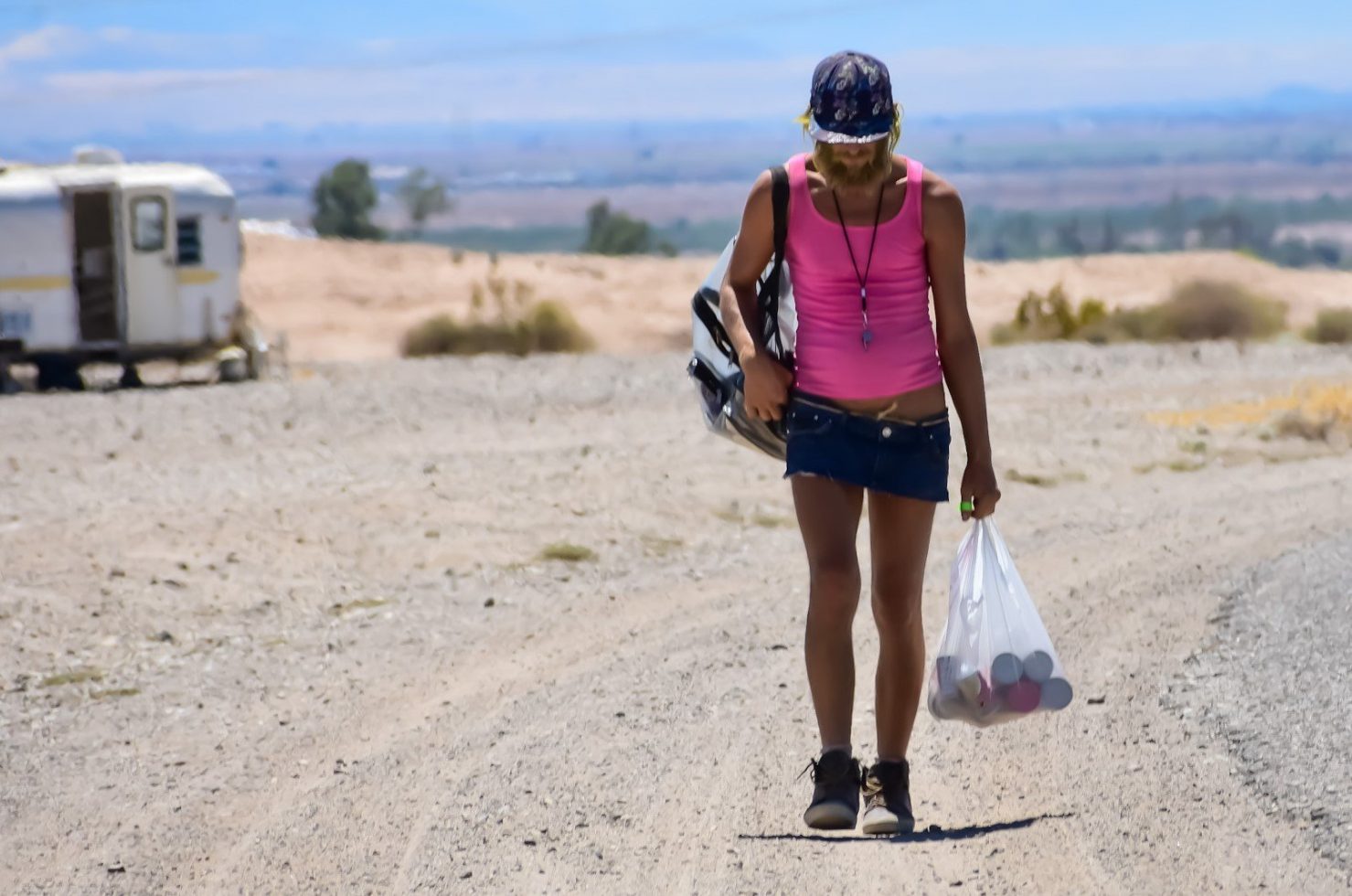 An unidentified man braves the heat Aug. 9 as he walks along Beal Road between Niland and Slab City. He was heading back to the Slabs after buying groceries in Niland. One theory suggests that the unknown, unidentified person who died in the June 28 Niland fire might have been one of the many people who venture into the township from the Slabs each day, which is a four-mile walk. CORISSA IBARRA PHOTO
Home
Featured Stories
In Featured StoriesLocal NewsRegional News

In the summer it’s a challenging walk, but each day one, two, maybe a couple more people from Slab City will make the four-mile trek down dusty Beal Road into Niland, to shop for essentials at the community’s lone grocery store.

These are the people living life their own way, on the fringes, and in the “Last Free Place in America,” the popular moniker that seemed to start being applied to the legendarily lawless enclave by writers, filmmakers, photographers, and even the Slabbers themselves, about a decade or more ago as the area marked its claim as an alternative hitching post for people done with the American Dream in the haze of the country’s economic crash.

But anyone from Imperial County knows the Slabs have been a destination for many of society’s castoffs long before the artists of East Jesus made it look sexy, even before a more fearless breed of snowbird looking for free camping ground flocked to the former military compound.

Slab City has long been known as a place you go when you don’t want to be found, where dropouts and derelicts, drunks and drug addicts, the mentally ill and the constitutionally strong, squat for decades anonymously among the ramshackle dwellings and rusty trailers with no running water or power.

Theories suggest this could be the origin of the one person never identified in the June 28 Niland fire, the one person in a community of 500 to 600 people who were evacuated en masse as wind-whipped flames destroyed homes and trailers, leaving an official toll of 43 structures in ruins and 31 families made up of 75 people displaced and homeless.

That one person is the only person to perish in the blaze, and his identity is still a mystery to law enforcement and first-responders as well as members of the Niland community. For all intents and purposes, this dead man is a ghost.

“In the area we have lots of transients, people who haven’t been to their hometowns where people know them for a decade or more,” said Chief Deputy Robert Benavidez, who as third in command at the Imperial County Sheriff’s Office is well-acquainted with who is and isn’t at the Slabs.

“Nobody is looking for them, and they don’t want to be found,” he explained. “Many of these people are running away from their past.”

And when they die, sadly, it often takes the Sheriff’s Office “forever to locate next of kin; sometimes many years, maybe never,” Benavidez said.

As county fire and planning department officials combed through the still-smoldering ruins together the day after the Niland fire, June 29, the man’s body was discovered. It was initially believed the remains were located in a burned structure, as planning officials were busy red-tagging razed homes around the time of the gruesome find.

Naturally, many in the community made their own connections and began to concoct their own stories about who this lost soul could have been. After all, everybody in town knows everyone else, said Maria Nava-Froelich, coordinator of the Calipatria-Niland Family Resource Center run by the Calipatria Unified School District.

Nava, who was raised in Niland and is a member of the Calipatria City Council, knows just about everyone in the unincorporated township a stone’s throw from the southern end of the Salton Sea. She spoke to this newspaper Aug. 6.

She said the deceased could have been among the several already homeless people she knows of who showed up at the evacuation center set up at Calipatria High School the night of the fire, when first-responders cleared out every last person while the fires raged on.

Without revealing too much about what she heard from whom, Nava said people in town were insisting the body might be the son of an ex-girlfriend of a well-known Niland resident who had died some years earlier. It was believed the decedent was squatting in the man’s abandoned home.

Nava had names, but she declined to state them on the record, and other contacts she provided this newspaper with did not return phone calls seeking more fleshed out theories on who the man could have been.

However, with the investigation into the blaze in its early stages, it wasn’t revealed for some weeks that the remains were in fact found far from any structures, with the burnt body located near some brush in an open area near the origin of the fire several hundred feet southwest of the Niland Apartments and the Niland Chamber of Commerce building, both near Fourth Street and Highway 111, Imperial County Fire Chief Alfredo Estrada said.

More specifically, Estrada explained, the body was found among some brush about 100 feet north of a communications tower, in the area where the brush fire started.

“He was just found lying down,” Estrada said. “No incendiary devices around, no matches … we’re not saying he couldn’t have been the one to start the fire, but there was no evidence that he did start it, either.”

At least with Nava’s rumor, the story seemed reasonable and plausible. But with Estrada dashing that theory and providing a definitive location, the truth seems even stranger than the fiction.

What’s more, even though Benavidez and Nava know there to be a transient population that moves in and out of Niland freely, county officials charged with keeping track of those displaced by the fire have no evidence that anyone considered “chronically homeless” was affected by the inferno.

Although Estrada confirmed that a homeless encampment of temporary structures located near the ignition site was destroyed in the blaze, it wasn’t known if they were populated at the time.

“That area was notorious for those type of folks,” Estrada said. “The sheriff’s department often responded to calls in that area and actually went out there one week before the fire.”

Yet the 31 families assessed at Calipatria High School on June 28 and accounted for were all living in permanent structures and none were homeless, said Deputy County Executive Officer Esperanza Colio, during an interview with this newspaper Aug. 7. Colio was also in charge of coordinating the Local Access Center the county opened at Calipatria High in the days after the fire to serve the needs of Niland residents.

Just as Estrada still doesn’t know what sparked the fire based on the evidence at the scene, other than being quickly consumed by smoke and fire, it wasn’t known under what circumstances this man died.

Benavidez said Aug. 7 that there were no signs of foul play and no reason to believe that the man was placed at the site.

At the moment there is nothing “suspicious” about the manner of death, he said. Can that change? Absolutely, Benavidez suggested.

“But right now, we have nothing. Just a dead body within a fire,” he added.

But how could a man simply be found lying peacefully in a field, with a raging inferno all around him, and it not be suspicious?

“We’ve seen the potential for these fields to light up like the proverbial Christmas tree,” Benavidez said, adding it’s reasonable to think that someone could be overcome so quickly there would be little time to run.

Fire Chief Estrada said Aug. 16 that on the afternoon of the fire, Niland saw sustained winds of 45 to 48 miles per hour headed due east, and the reason the blaze got out of control so quickly is embers from the origin point carried far through the township, lighting up palm trees and other ignitable sources along the way.

At this point, attempting to find out who died in the fire is a waiting game with potentially zero payoff, unless this is a known individual whose DNA or dental records are on file somewhere.

So far, there have been no missing persons reports filed with authorities, sheriff’s officials have said, and no one has come looking for any next of kin. In the early days of the investigation, Niland-area county Supervisor Ryan Kelley also acknowledged the man’s identity was a mystery, saying he might have been someone just passing through at the wrong time.

“It is still a John Doe,” Imperial County Senior Deputy Coroner Emanuel Ramirez said Aug. 6. “We don’t have any leads to go on.”

The county Coroner’s Office has since sent the remains out of the area to a forensic odontologist to try to identify the deceased through dental records, Ramirez said.

“I have not heard of any dental record databases locally or in the state,” Estrada cautioned, however. “When using dental records to identify an unknown person, investigators usually follow leads and compare records with a possible living next of kin.”

There is no next of kin in this case, which will make it virtually impossible to ID the individual with dental records, Estrada said.

“Along with sending the body to get the teeth inspected, we also sent away samples for DNA testing,” Ramirez said. “It will take one year to receive the results from the DNA test.”

If the deceased did not have a criminal record, it will make the possibility of identifying the individual through DNA less likely, Ramirez added.

As far as an ongoing criminal investigation is concerned, Benavidez said there is no crime and thus no active case, at least not really.

This is “not a closed case, but not an open pending case, either,” Benavidez added, describing the situation as more fluid depending on what happens down the road.

It’s this fluid nature from where Benavidez posited the possibility that this one man, this one unidentified soul who died a gruesome death by fire, might have wandered into town from the Slabs, never to be seen or heard from again.

Because in life, he might not have wanted that either. He might have been one of the countless people who seek anonymity in Slab City and prefer it that way, Benavidez said.

Surrounded by beer cans and flies, and the strumming sounds of his drinking buddy James on guitar, the late Mike Bright captures that idea perfectly in the final verse of what looks to be a self-penned ode to life in the Slabs posted to YouTube in late 2008:

“So, if yer getting’ tired of fightin’ the system/If the man is calling in all yer tabs/

“If yer troubles are so many, you can’t list ’em/then just chuck it all and join us on the Slabs/

“Just chuck it all and join us on the Slabs.” 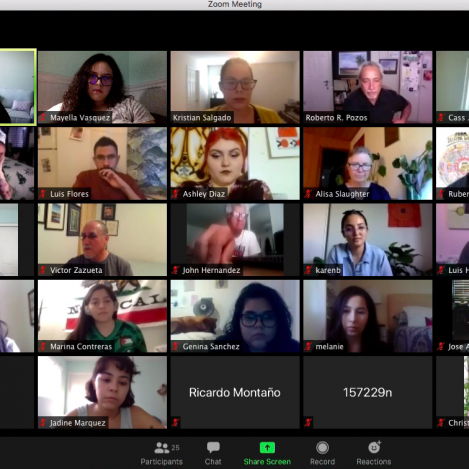