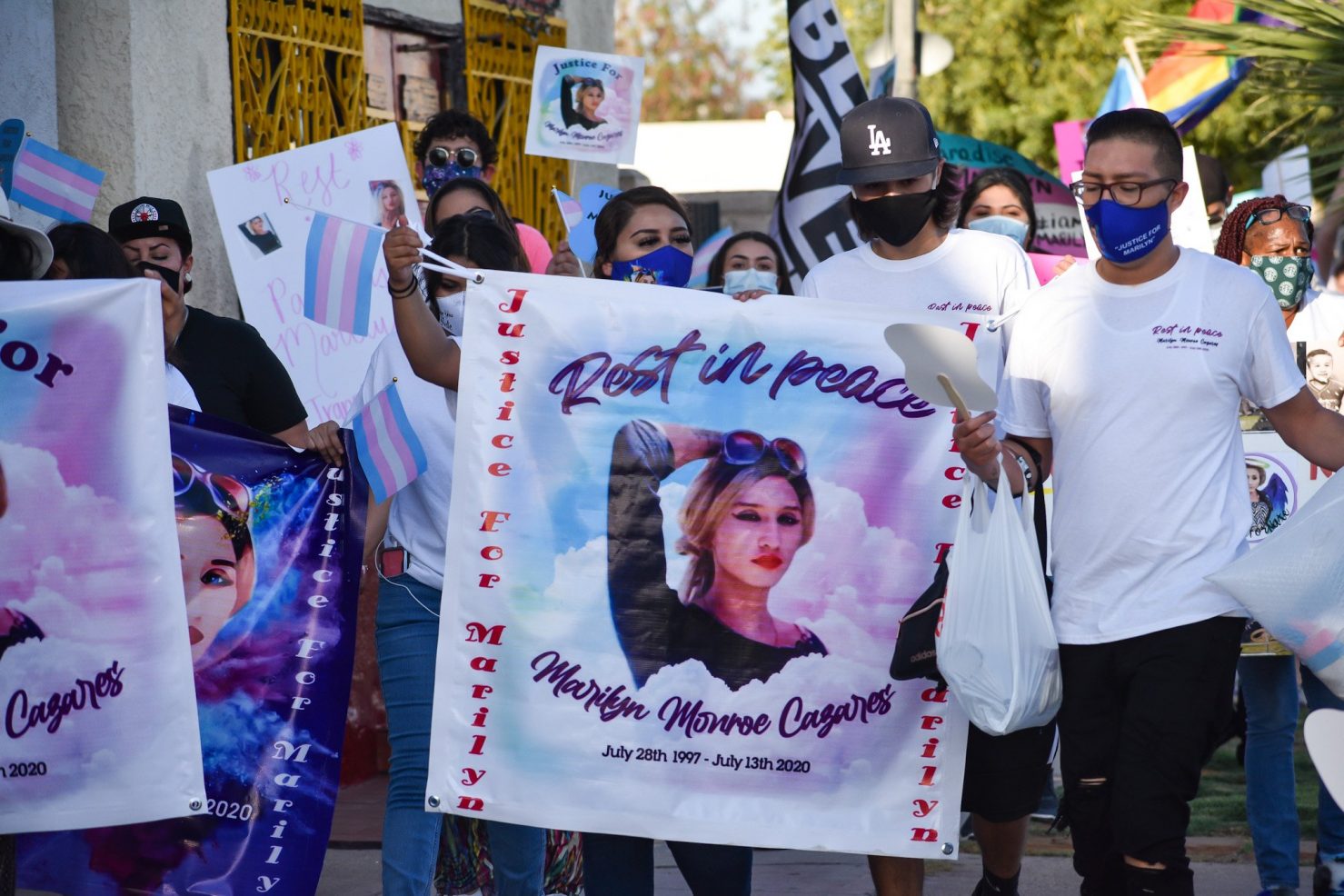 A banner commemorating Marilyn Monroe Cazares, a transgender woman who was killed July 13, is held up by her sister, Aubrey Cazares (center), at the start of an Aug. 1 march seeking justice for Marilyn that started near the state Department of Motor Vehicles office on Main Street on the east side of Brawley, close to the site where Marilyn’s burned remains were found. The march ended at Plaza Park in the center of the city. CORISSA IBARRA PHOTO
Home
Local News
In Local News

About 150 people holding signs and waving rainbow flags marched on Main Street on the way to Plaza Park in Brawley on Aug. 1 to call for justice in the Marilyn Monroe Cazares murder case and create awareness about the sanctity of all life.

“I am here marching for justice for Marilyn. I want people to co-exist. It does not matter if you are straight, gay, lesbian, or transgender … We just want to be able to work, be free and pursue happiness and that’s what we want for everybody,” said Angela Soto, transgender support group coordinator at the Imperial Valley LGBT Resource Center in El Centro, as she marched to the Plaza Park with the large group of activists in the 100-plus degree weather.

A transgender woman, Marilyn Cazares’ body was found burned in the 1100 block of Main Street on a couch in front of an abandoned building in Brawley on July 13, the victim of an apparent homicide. The Cazares family alleges Marilyn’s death was the result of a hate crime.

The “I Am Marilyn” march was organized by the IV LGBT Resource Center along with the support of the Cazares family. The march started in front of the state Department of Motor Vehicles office on the east side of Brawley, near the site of where Marilyn’s remains were found stabbed and burned.

“We are rallying around Marilyn because she is from here. Her family is from Westmorland. She was living in Brawley as a homeless transgender woman and quite often times, I see myself as being fortunate,” Soto said. “I have a job and a family, but I could see how easily I could have been homeless and what kind of a life would I lead if I was in her position?”

Soto said she has heard nothing but good things about Marilyn Cazares and that she was a peaceful law-abiding citizen who didn’t panhandle and was just living her life.

Shortly after the march began, a transgender woman named Franya, who commuted to attend the event from San Diego on behalf of Proyecto Trans Latinas, spoke with a Calexico Chronicle reporter.

“We are happy to be here participating in this march helping Marilyn. It has been a trend that transgender people are being assassinated left and right because there is no justice,” Franya said. “This is a good way for us to spread the word and have a voice. We support all human rights because at the end of the day unity is power.”

Franya said it touches her heart to know that she was at the march for Marilyn and feels she did make a difference by participating.

“We found out about this event through Facebook and didn’t think twice about coming,” Franya said.

Fernando Lopez was born in Brawley, raised in El Centro and today is the executive director of San Diego Pride.

“I grew up in this town and I left because the homophobia I faced. People like our teachers, parents and institutions of faith echoed out disgusting vitriolic sentiments of homophobia and transphobia,” Lopez said. “It got to a point when I was in junior high and high school here, we would get death threats at our home. When we would call the cops, they didn’t care. When we reported it to the principals, they turned their backs and said it was our fault.

“This is why I left the Valley and turned to a life of activism in San Diego. When I return to Brawley today and see everyone gathered in direct opposition to this hate, it means the world to me,” said Lopez, who could no longer hold back tears.

When the activists reached Plaza Park, organizers used the Kiwanis Kiosk as a stage to address the crowd. Brawley residents commuting past the event honked their horns to show support.

“Our family would like to thank local law enforcement who have dedicated countless hours in this case to get justice for Marilyn,” said Mindy Garcia, the victim’s aunt, as she addressed the crowd at Plaza Park.

“To feel dignified in spite of the limitations put by society, Marilyn courageously lived her truth beautifully. Today she is honored as a human being. Thank you so much for coming,” Garcia said.

Several other Cazares family members spoke briefly during the event, describing Marilyn’s life and recounting the many ways she touched their lives.

“One thing I want everyone to know, whether you knew her as Nate or Marilyn, is that she was a human at the end of the day,” said Austin Christianson, a childhood friend of Cazares’ as he addressed the crowd from the kiosk.

“Everyone deserves to be treated equally and that is what Marilyn’s life taught me,” said Christianson.

“This evening our community gathers to honor the life of Marilyn Cazares. Many hearts were broken by this tragedy and we must continue to seek justice for Marilyn,” Jimenez continued to read Garcia’s message to the crowd. “Everyone should feel safe to be who they are, and love who they want to love.”

“It is shameful and unacceptable that we see this happening in our community in 2020,” Oliva said. “This horrific murder happened right here in Brawley and it sent shock waves through us all.”

“I had the honor of meeting Marilyn,” said Thomi Clinton, executive director of Trans Health and Wellness in Cathedral City.

Clinton commended the Cazares family for educating themselves in terms of pronoun usage and making a sincere attempt to be respectful.

“Love is education. We have to learn to be intolerant of gay, lesbian and transphobia,” said Clinton, before mentioning that Cazares was the sixth trans person to be murdered in the nation in July.

Brawley police announced in a press release July 28 that the department had requested assistance in the homicide investigation of Cazares from the FBI, the Department of Homeland Security Investigations Unit, and the California Department of Justice.

The request for assistance was result of information gathered during the course of the investigation regarding a need for “digital evidentiary resources needed in the investigative effort,” police stated.

“This is still an active murder investigation and we cannot release any information regarding the case at this time,” said Brawley police Cmdr. Brett Houser in a July 28 interview with this newspaper.

“As soon as we reach a point in our investigation when we can inform the public of the results of our investigation, we will immediately announce that information to the community,” Houser said.

Previous
Why are COVID deaths rising so rapidly if cases are falling? Timing, Imperial officials say 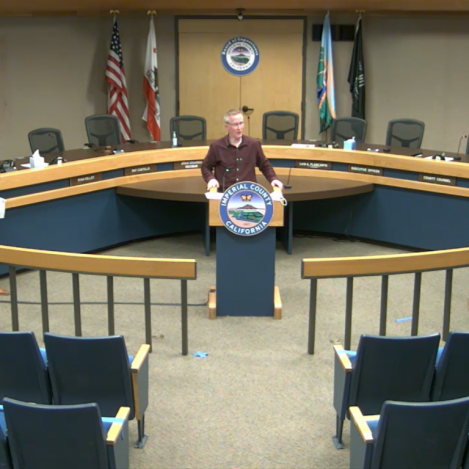