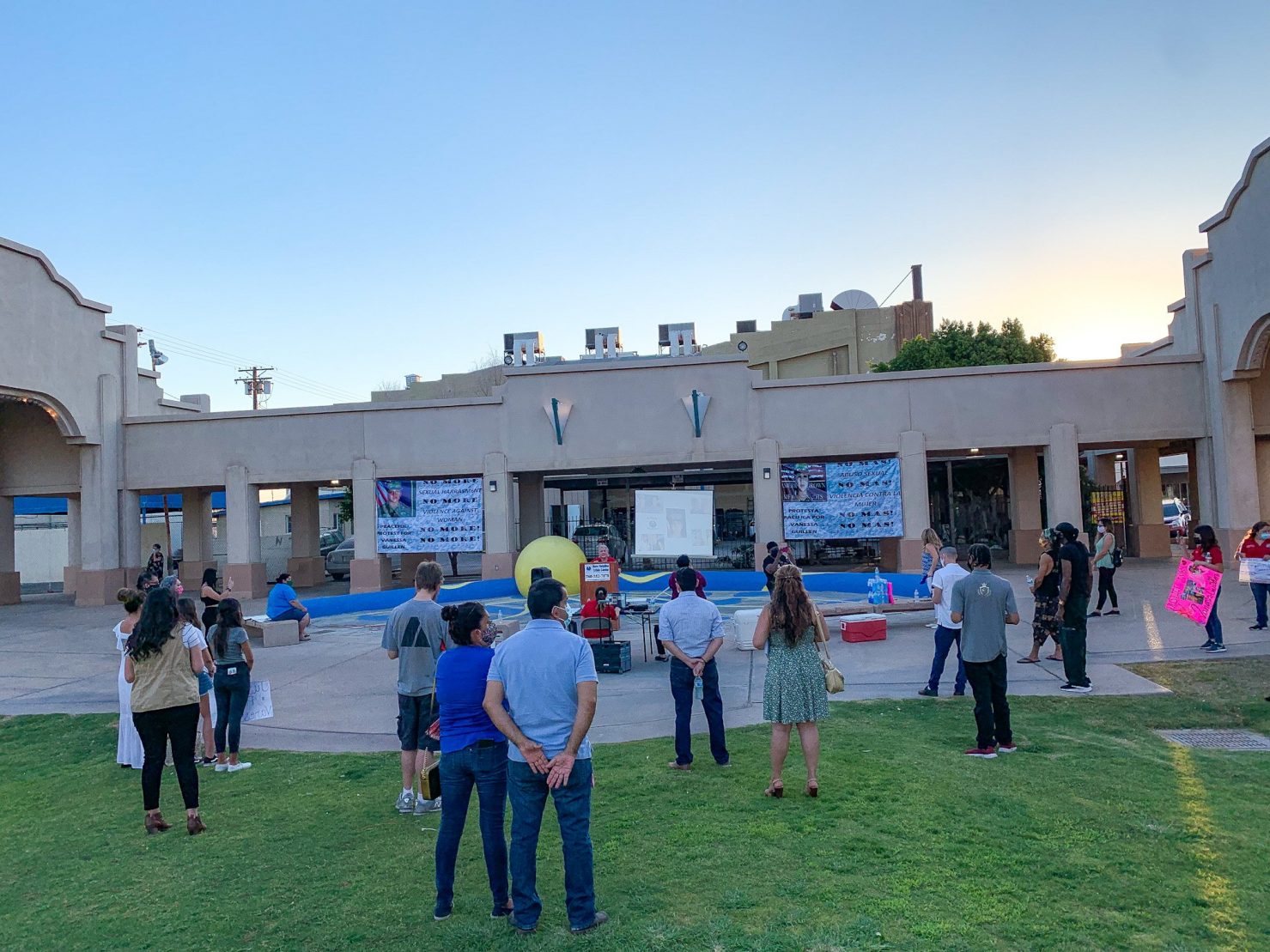 When Martha Singh’s young nieces asked to join her at a peaceful protest she was attending in solidarity of Army Specialist Vanessa Guillen, she knew she had to bring them.

“They asked to be here, that’s why it’s so important,” said Singh, the president of MANA de Imperial Valley. “Amplify the voice of Vanessa and the many women who are brave enough, courageous enough and fearless enough to go out there and talk about their situation.”

Singh was among a handful of community members who spoke out during the event organized by the Sure Helpline Crisis Center in the middle of the El Centro town square near Seventh Street and Main Street on the evening of July 31.

“We know a small group is not going to make a big change, but there is so many big cities and people walking and protesting … now is the time to say me too,” explained Margaret Sauza, executive director of Sure Helpline.

Guillen first caught the attention of the nation following her disappearance from her post at Fort Hood in Killeen, Texas in late April. Two months later, when the 20-year-old’s remains were discovered dismembered and burned, several advocates across the nation launched protests, rallies, and demonstrations to demand justice for Guillen.

Additionally, Guillen’s family, friends and fellow soldiers have raised allegations that before she was killed she had been sexually harassed by Army Specialist Aaron Robinson, who allegedly killed her with a hammer in the armory room after she told him of her plans to file a complaint against him.

A federal complaint alleges that Robinson, 20, killed Guillen while on base, hid her body in a large box and attempted to dismember and burn her remains with the help of his girlfriend, 22-year-old Cecily Aguilar. Days before charges were announced, Robinson fatally shot himself with a pistol as police approached him and authorities have since arrested Aguilar.

A federal grand jury indictment charges Aguilar with one count of conspiracy to tamper with evidence and two substantive counts of tampering with evidence. She faces up to 20 years in federal prison for each count.

“We want to show that we do care and have people realize they can speak up about sexual harassment without the fear they’ll be murdered,” explained Sauza.

Sauza was among the first to speak at the podium in front of a projector and posters displaying photos of Guillen. She had been especially inspired by Guillen’s grieving mother, Gloria, who has made several impassioned speeches on behalf of her daughter.

“We are here to give a voice to Vanessa Guillen and her family,” said Sauza. “We all need to unite because we all have families.”

Sauza also spoke out against sexual harassment and sexual assault in the military by demanding change in the way the military handles such reports and in the way they treat victims. Other activists have also expressed outrage at the lack of answers and action from the military when the disappearance of Guillen was first announced.

“We should create safe avenues for victims that report,” Sauza said. “We are not against the Armed Services, we are against the way it is being handled.”

Members of the Imperial Valley Social Justice Committee and the local Black Lives Matter movement also spoke during the evening protest to request a congressional hearing be conducted to investigate the Army’s handling of Guillen’s death.

“If we really want to acknowledge and recognize Vanessa and the other men and women in the military … there’s one powerful way we can do that and that’s on Nov. 3rd go out and vote,” said Marlene Thomas, chairperson of I.V. Social Justice Committee. “Your vote is your power.”

Following a round of speeches, community members lit candles, and watched portions of a press conference held by Guillen’s mother as she spoke about her daughter.

“I think it’s good that they are not letting this go under the rug,” said 13-year-old Brittany Goff. “It’s a serious situation. … I know we are a small town, but we thought it was right that we come.”

Brittany and her twin sister, Bailey, were the young nieces that had asked their aunt Martha Singh to bring them to the evening protest after learning of the event.

“When we found out what happened to Vanessa it was shocking,” Bailey said. “This is a big deal … what happened wasn’t right and no one should touch anyone inappropriately.”

The evening protest concluded around 8 p.m. with a prayer that gathered more than 30 community members together to honor and mourn the death of Guillen.