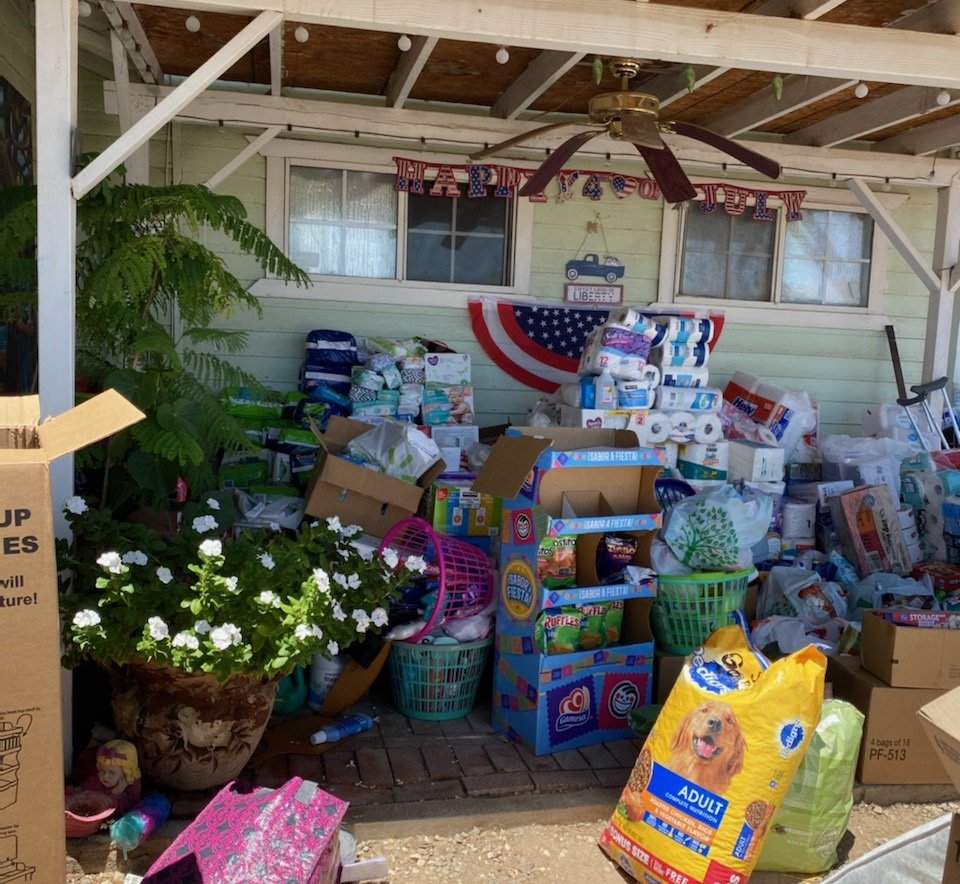 Nena Lopez of Fallen Angels received so many donations for victims of the June 28 Niland fire that goods could not all fit in her Niland home. | COURTESY PHOTO
Home
Regional News
In Regional News

NILAND — After the June 28 fire in Niland, residents from every city in the county heeded the call to help the 43 families displaced from their homes by the disaster.

“It started the night of the fire. We went quietly on behalf of the Calipatria Chamber of Commerce and bought $150 of food from Jack in the Box and a big pot of coffee for victims of the fire who were at Calipatria High School. There were about 20 families there who needed food,” Calipatria Chamber President George Prieto said during a July 7 telephone interview.

Prieto made eight trips from Calipatria to Niland in his truck over the next few days delivering supplies to families who lost their homes.

“The response to calls on Facebook to help the community of Niland were so overwhelming. The Niland Community Center, the Calipatria Chamber of Commerce and the Calipatria/Niland Family Resource Center, the three warehouses used to store donations area overflowing with goods,” said Prieto, confirming that donation centers have asked locals to stop donating goods for the time being as those affected have little space for storage in temporary hotel rooms.

“I think it was out of their heart from the people in the county to donate. Spread the Love, Black Lives Matter, the IID, Brawley (American Legion) Post 60, the Latter-day Saints (Mormon church), the Brawley wrestling teams, parolees from Calipatria State Prison and many other local non-profits were generous in their assistance to those in need,” said Prieto, mentioning there was also a giveaway in Calipatria on July 8 for less-fortunate families not involved in the fire to utilize the surplus of goods donated.

“Seeing this fire is really sad. My mother-in-law (Porfiria Correa) lost her house on the Fourth Street and she is receiving help from both the Family Resource Center and the Niland Chamber of Commerce,” Victoria Chavez, secretary at the Calipatria Chamber of Commerce, said. She is also a Niland resident.

“Niland never used to look like this, but now it is depressing because we need help from the county to clean up,” Chavez.

It was only by a miracle Chavez avoided losing her own home.

“We heard it was a brush fire on the night of June 28 and before we knew it, boom, the fire was everywhere. I told my kids to grab the most important things. My youngest grabbed a PlayStation 4 and the controllers. My oldest, Noah, grabbed water bottles and the bottle. I thought that he was the sweetest for doing that,” said Chavez, as she started crying when she remembers the experience.

Chavez feels that her neighbors are grateful for the help from Imperial Valley residents who pulled together support them in their time of need.

“It is such a sweet and nice thing because not that many people know about Niland. It took this to happen for people to remember that we are on the map. So much stuff is coming daily. We have nowhere to keep our goods,” Chavez said.

“People have donated everything, like of tons of water and food. That alone means a lot. They also donated clothes, shoes, books, household items, dishes. It’s like you see some of the stuff and we already know what family it would go to because that’s their style,” said Chavez, who wanted to reiterate to her neighbors, they are not in this alone.

Nena Lopez of Fallen Angels built a reputation serving Niland through her organization, which has hosted a Christmas party for the less-fortunate children of Calipatria, Niland, Bombay Beach and Slab City for the past 15 years.

“My house is close to the fire and we are lucky it did not burn down. The day after the fire, Joel Gonzales from Desert RV Service dropped off three truckloads of goods. Niland residents were unfortunate to lose their homes but very fortunate to that they got so much help,” said Lopez, whose home in the epicenter of the fire was saved by her son and husband hosing down the structure with water from their pool.

The first phase of donations was intended to help displaced families with clothes, food and things they could keep in the hotel, and the second phase is to get beds and furniture, which are being stored in units rented in Niland, Lopez said.

“We have received so much that we can no longer take any donations. Everything is under my porch. Food is in my house. My kids and neighbors help me sort out clothes when people call us. We get families little things like an electric skillet and pot to use at their hotel,” Lopez said.

Three related families who all lost their home in the Niland fire are going to stay in one house and came to Fallen Angels asking for shower curtains Lopez said planning to personally buy the items the family needed.

“It’s a great feeling to let them know they are not alone but it is very important we help these people because most of them do not have insurance,” Lopez said.

SA Recycling of El Centro brought bins for people to clear out their yards, Lopez said.

“Lots of locals came to me. I don’t know how they got my phone number, but I got calls from people in Calexico, El Centro, Holtville, Brawley and every other city in the county. I’m not gonna stop until they have a home and everything in there. It could have been me,” said Lopez.

When Joel Gonzalez of Desert RV in Brawley caught wind of the fire and found out how many homes were lost, he wanted to do anything he could to help.

“Right away, I went to Nena Lopez to check if she was OK and asked what I could bring. It wasn’t just me. It was the whole community. My business was just a drop off and distribution center for donations,” said Gonzalez, who starting a giving frenzy with his post on Facebook asking for support from family friends and the community the day after the fire.

“The support was unreal. I can’t take credit for it. We opened our shop for people to drop things off. I worked with the American Legion who is helping to make deliveries. People from all over the county were coming all together to drop stuff cases,” said Gonzalez, who led a team of five trucks pulling trailers full of essential goods from Brawley to Niland.

“I am really proud of my community. People complain about the heat or restaurant choices, but we sure do come together in a time of crisis,” said Gonzalez.

“I heard there was a five-alarm brush fire from a Calexico Chronicle article. The next morning I saw there were 40 homes destroyed and families displaced,” Chris Nunn of Christ Community Church said. “I knew my people wanted to help and I just wanted to give them the opportunity to help. I made a post so we could mobilize, and people responded.”

“Alex Tacos, a taco cart, catered 250 meals on Wednesday. Maranatha (Steakhouse) catered for 250 on Thursday. The Landeros family of El Centro donated 150 meals last Tuesday and they made 250 more meals today (July 7). CCC set up a fund to help pay for those meals,” said Nunn, who mentioned more than 100 cars participated in a donation drive to help victims the day after the fire.

Brawley Elks Lodge members also prepared a number of breakfasts and delivered them to hotels housing the fire displaced in Brawley and Calipatria. 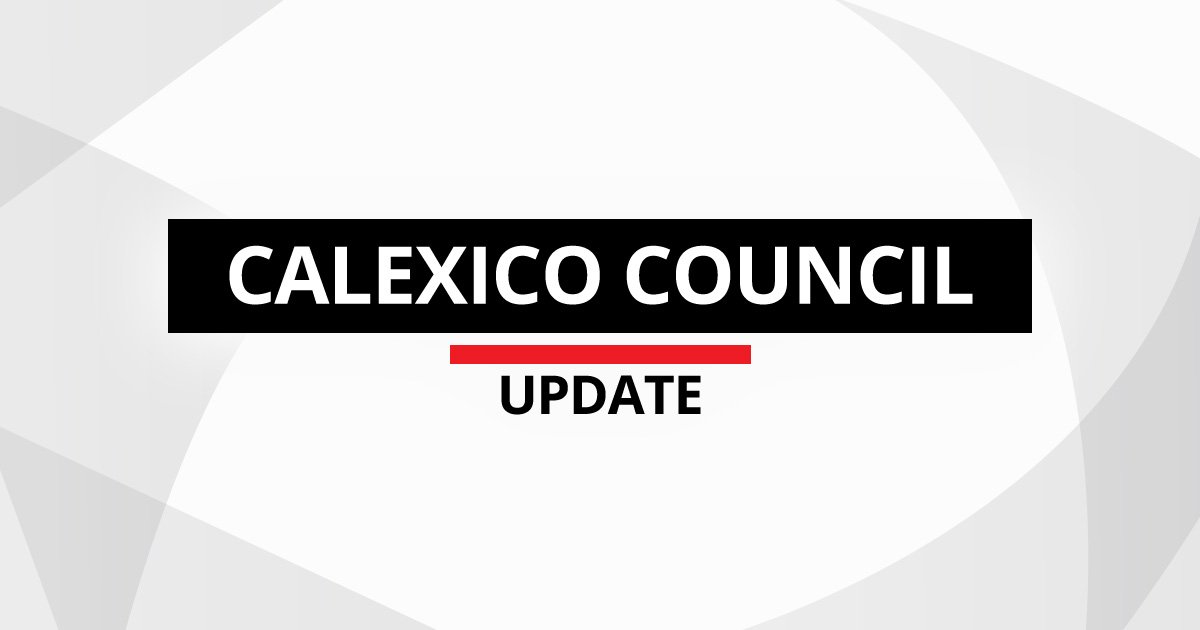