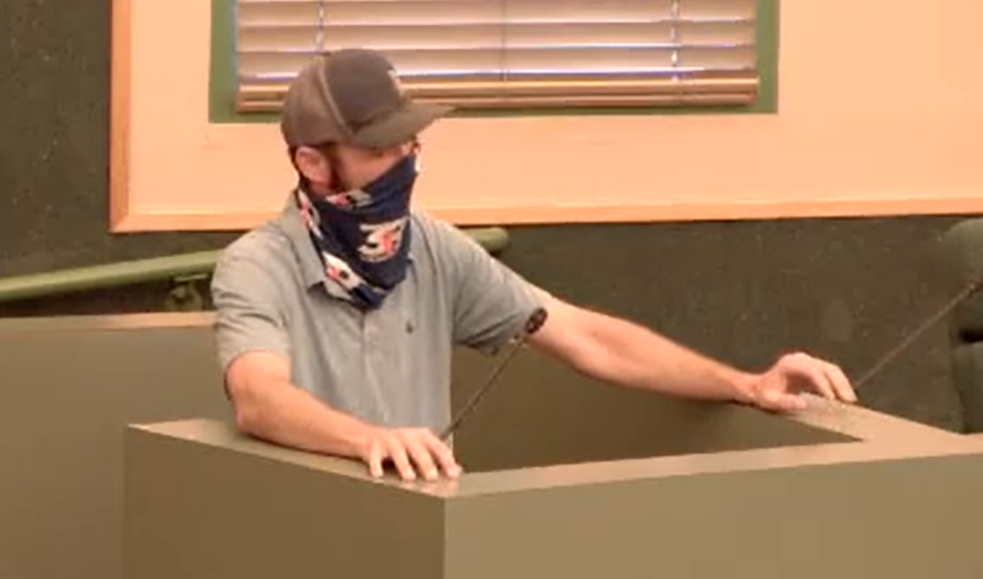 Ray Roben, representing nonprofit developer VII Foundation, speaks to the Calexico City Council on July 27 about his company's need for a conditional-use permit to seek millions of dollars in funding for programs aimed at “vulnerable populations.” The foundation's plan is to buy and combine the 43-unit Hollie’s Hotel at 801 Imperial Ave., which is closed and in a state of disrepair, and combine it with a 16-unit apartment complex at 18 Lincoln Street to turn it into a senior and "vulnerable population" living facility. | VIDEO SCREEN CAPTURE
Home
Local News
In Local News

(UPDATE 1 p.m. July 31: Additional information from the project developer explains what kind of homeless population would live in the proposed facility if it received homeless funding.)

CALEXICO — Calexico officials OK’d a permit for the construction of a $15 million to $20 million fixed-income apartment project for seniors and homeless persons during a special meeting, that could clear the way for the rehabilitation of the former Hollie’s Hotel on Imperial Avenue.

During a special meeting of the Calexico City Council on July 27, the council approved, 5-0, awarding a conditional-use permit to nonprofit developer VII Foundation, represented by Ray Roben, who explained to the council he just needed a permit to then seek millions of dollars in available state and federal funding for programs aimed at “vulnerable populations.”

The plan is for VII Foundation to combine the 43-unit Hollie’s Hotel at 801 Imperial Ave., which is closed and in a state of disrepair, city officials said, and combine it with a 16-unit apartment complex at 18 Lincoln Street and some commercial space to turn it into a “59-unit, professionally managed, deed-restricted, affordable senior and vulnerable population living facility,” according to a staff report to the council prepared by contract planner Chris Velasco.

Council members Lewis Pacheco, Bill Hodge and Camilo Garcia seemed genuinely happy to see this project before the council, with Garcia saying the city welcomes anyone wanting to invest $15 million to $20 million in the community.

Hodge asked whether Hollie’s would be brought up to code and whether the seniors would see a nice new facility, with new carpet and air-conditioning and other amenities.

Velasco and Roben both said yes. For the city’s end, Velasco told the council that with a new permit comes adherence to the latest state building codes for “tenant improvements.” Roben, on the developers’ side, said the rooms would be gutted, all new stucco, paint, plumbing, flooring, and other issues would be addressed and improvements made.

Although there is commercial space listed, Roben said it would not be used as such; rather, the former spaces that housed businesses adjoined to Hollie’s would be used as a senior center of sorts, and he even shared an idea his firm liked from the Calexico Wellness Center, which suggested using spaces for a new exam rooms in which healthcare providers could make house calls to senior citizens living there.

Roben explained July 31 the whole plan is conceptual at this point and all depends on whether his foundation receives state and federal funding.

VII Foundation is essentially the nonprofit division of the Roben family, who are part owners of Duggins Construction Co. Roben also has his own real estate brokerage firm. He is also involved in another development for homeless persons through the recently publicized year-old state Homeless Emergency Assistance Protection grant funds the county has been criticized for taking too long to spend.

VII Foundation’s proposed Calexico-Hollie’s project had previously not passed the Calexico Planning Commission on June 18 due to a lack of “aye” votes; the project died 2-1 in front of the four-member commission when one commissioner was absent. The group immediately sought an appeal straight to the council, Velasco said.

Although council members said how much they liked the project, and the planning division of the city recommended the project move forward, at least one community member disagreed.

“Once more the city is going from bad to worse …” the comment began, before the audio for the live meeting recorded on Community Spectrum and Facebook became inaudible, as it seemed Garcia’s microphone was not working.

The audio picked up about a line later and Beltran’s comment focused on the council:

“… You should be ashamed to be sitting in five of the most important chairs in Calexico and not be up to the task or not at the intellectual level,” Garcia said, reading Beltran’s comments. “The Hollie’s Hotel, which was a jewel, and was located on the best avenue of our city, will be forgotten.”

To which Hodge responded, “Well, that time is over.”

Many questions have arisen since the story first published July 30, including questions around what kind of homeless people would be living in the proposed facility alongside seniors.

Roben said July 31 that the homeless, if homeless funding is indeed used to build the facility, would not be people directly off the streets; rather, the homeless residents, or “vulnerable population,” would likely be families, women or children who have received multiple services, have already gone through emergency or transitional housing, and would be establishing more permanent homes.

Calexico Gets FAA Grant For Airport

The primary reason the city staged the special meeting July 27 was to quickly acknowledge and accept at a $1.6 million federal grant the city received July 22 from the Federal Aviation Administration through the federal Coronavirus Aid, Relief, and Economic Security (CARES) Act to rehabilitate the taxiway on the Calexico International Airport.

The council unanimously approved accepting the grant, but not before incoming City Manager Miguel Figueroa explained to council the situation.

The city was ready to move forward on an approximately $4 million runway/taxiway rehabilitation project at the airport, but were informed a few weeks ago that FAA funding was going to be delayed for a year to complete the project, so at the last council meeting, July 15, the council rejected all bids from contractors to start the project.

On July 22, the council was informed that through the CARES Act, the FAA was awarding Calexico $1,649,430, with no matching fund stipulations, for the taxiway rehab project, Figueroa said.

The council had until Aug. 7 to accept the award, so the need to accept it quickly and get the funding earmarked was urgent and a special meeting was required.

What this will now allow the council to do is to move forward with the rehab project, pending the rest of the funding to come from FAA in the next federal fiscal year, starting in October.

Unfortunately, council members were told they cannot undo the rejection of the construction bids from the previous meeting. A new bidding process must occur.

In late May, the city received four qualified bids to actually perform the construction at the taxiway. After sending the FAA the bid tabulation, Public Works Director Lilliana Falomir’s report to the council stated FAA said that the city would either need to scale back its project or hold off until fiscal 2021 to get the remainder of the funding.

The project calls for a new concrete taxiway and parallel access roads, new lighting and signage, drainage improvements and other infrastructure.