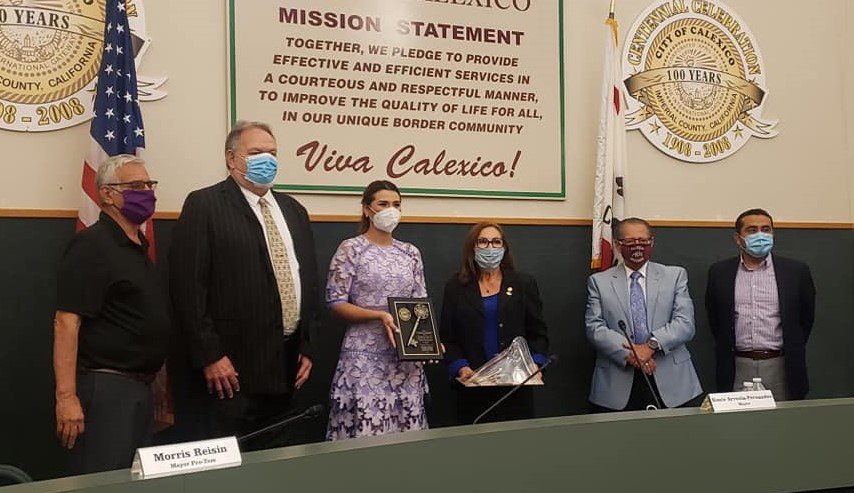 CALEXICO — Ready to start its summer recess, the Calexico City Council wasted little time during its last meeting, honoring Mexicali’s mayor with the key to the city, awarding the new city manager a five-year contract with hefty “at-will” provisions and rejected and accepted some major public bids, among several other issues.

Dark the rest of July and all of August, the Calexico City Council will not meet again until Sept. 5.

Although not quite as made-for-broadcast — streaming live via Facebook, that is — as the presentation of a ceremonial key to the city to Mexicali Mayor Marina del Pilar Avila Olmeda, the night’s most important decision was arguably the ratification of incoming City Manager Miguel Figueroa’s employment contract.

He assumes the position from outgoing City Manager David Dale on Aug. 1, who resigned more than two weeks ago.

Although little was said during the meeting, the contract awarded to Figueroa was deep in protections in the event that Figueroa is fired “without cause” by the council in the first three years of his employment.

This was “the same contract we had with (former City Manager) Armando Villa,” Calexico City Attorney Carlos Campos said in presenting the contract to the council. It wasn’t clear if that was something that Figueroa specifically requested, but Figueroa has made it known that he admired Villa and has referred to himself as being of Villa’s style of management.

The five-year contract has a base salary of $169,000 a year, with a $400 annual car allowance and allows for merit increases of up to 5 percent per year.

Since such contracts are at the will of the council, meaning a city manager can be fired without cause, certain provisions were written in offering severance and thresholds the council needs to meet that would allow Figueroa to be terminated.

City manager positions are highly political. Although Figueroa has the full support of the current council that unanimously appointed him to the permanent position following the resignation of Dale on July 1, there is also a major election of the Calexico City Council looming Nov. 3, with three full-term seats and one two-year short-term seat up for election.

That could dramatically alter the direction of the council.

To that end, according to the tenets of Figueroa’s contract, which were accepted by a 5-0 vote July 15, if Figueroa is terminated without cause in the first year of the contract, he would be paid a severance package equal to 10 months of salary and have his medical insurance paid for the same term.

Also, if fired within the first three years of the contract, the council has to agree 4-1 to do so “without cause”; otherwise, it will require a 3-2 vote “with cause.”

Calexico City Council member Bill Hodge said he thought the contract was equitable and fair and that the rate of pay was “not too high, and not too low.”

According to information in the meeting agenda backup report, most recent Calexico city managers have been paid between $144,000 and $198,000.

As a team, Assistant City Manager Miguel Figueroa and Dale “did a great job, were a great team,” council member Lewis Pacheco said.

Mexicali’s Mayor Avila Olmeda, at the invitation of Mayor Fernandez, brought several staff members with her to the meeting July 15 to accept a key to the city that Fernandez said reaffirmed the “sisterhood” agreement between the cities established May 24, 2017, to work together and promote public health, the economies of both cities, the environment and public safety.

Fernandez described the region as inextricably linked through “trade, commerce, culture, energy that comes with the unique status as international gateway cities,” especially at a time where the communities are under threat from a public health crisis like COVID-19.

In presenting the key, she reiterated the desire for the region to work together during COVID and beyond.

“I’m very happy right now. This is an honor for us … I am glad to be here in Calexico, our neighbor and literally our sister city,” Avila Olmeda said, referring to the historical precedent of two women serving as mayor of adjoining international cities.

“Historically, you cannot understand Mexicali without Calexico, nor Calexico without Mexicali. Beyond the diplomatic sisterhood we all know, we are a single region, together, with the rest of the Imperial Valley,” Avila Olmeda explained. “We here have affections, stories and live experiences in the city … always giving each other a hand because we understand we are one community.”

The Mexicali mayor reiterated the commitment to working together to get past COVID in the region and protect residents on both sides of the border.

“We have a long way to overcome (this) pandemic, but if we can work together, we can be a strong region,” she added.

Although Dale, in his final meeting with the council, recommended that the council reject a lone bid for the installation of sports lighting at Adrian C. Cordova Park, the council moved forward anyway and voted unanimously to award a $755,501 contract to Tom Watson Inc., a local electrical contractor out of El Centro.

Because only one qualified bid was received by city staff even after the project was highly advertised and bid solicited through the usual channels, Dale was concerned over any “perception of corruption” by the public at such a highly politically charged time.

Dale said Tom Watson has done excellent work for the city in the past (most recently with installing light poles at Joel Reisen Field) and came well within the project estimates for Cordova Park of $800,000, staff was still recommending that the project be rejected and bid again, a process he said would take about two months.

Mayor Pro Tem Morris Reisen mentioned that Watson was committed to building a restroom at Reisen Field as well, so he motioned the council move forward with the bid award. Pacheco seconded the motion, saying Watson has a reputation for doing “excellent work.”

The project will be paid for from Measure H bond funds already programmed into the fiscal 2020-2021 budget.

While it was not explicitly said, COVID was likely the culprit in undermining federal funding for a taxiway rehabilitation and reconstruction project at Calexico International Airport.

Public Works staff recommended the council reject all received bids to rehabilitate and reconstruct taxiway A at the airport off Anza Road due to a lack of funding available from the Federal Aviation Administration, which told public works staff in June that the FAA would not be providing all that was promised for the current federal fiscal year.

After the FAA paid more than $238,000 in 2018 for the design phase of a taxiway rehab project, the city had been amassing and stowing away annual FAA allotments (usually $150,000 a year) for work to be done at the airport.

In late May, the city received four qualified bids to actually perform the construction at the taxiway. After sending the FAA the bid tabulation, Public Works Director Lilliana Falomir’s report to the council states FAA said that the city would either need to scale back its project or hold off until fiscal 2021 to get the remainder of the funding.

The project calls for a new concrete taxiway and parallel access roads, new lighting and signage, drainage improvements and other infrastructure.

The council rejected the bids.

In order to secure Imperial County Local Transportation Authority funding, or Calexico’s allotment of its Measure D gas taxes, the council needed to approve a five-year project list for fiscal years 2020 through 2025.

That list, according to Falomir, includes a $5 million to $6 million estimated roads project that went out to bid July 21 in which another 58 streets in the city will get overhauled. That particular project, however, is already paid for through LTA bond funds from 2018, she said.

The council voted 5-0 to submit the list, which also includes bride widening and reconstruction projects, and other major streets and infrastructure projects.

The council unanimously approved another $55,000 payment to 10 Over Studios of San Luis Obispo to handle all construction management of the new Calexico Fire Department headquarters project. The city has been working with 10 Over Studios since 2017, when the firm was hired to design the new fire station.

In June, the council awarded a $5.827 million bid to Oakview Constructors Inc. of Calimesa by a unanimous vote to build the state-of-the-art Fire Department headquarters at 430 E. Fifth St.

Calexico council members Hodge and Pacheco used their council comment periods to address the continued criticism coming toward members of the council since Fernandez was elected mayor.

Fernandez has chosen not to respond to any of the criticism publicly, and Mayor Pro Tem Morris Reisen has fired back via social media and in this newspaper.

Pacheco told critics that fellow council members cannot be forced to resign or uninstalled without formal processes, instead he suggested that members of the community with concerns take the proper route and run for office to oust them.

Hodge used his time to reiterate that the council has done much good and are not corrupt politicians as some are saying. He said the actions of one “millennium” politician (David Romero) should not undo all the council has accomplished as a group over the last two years, including righting the city’s budget problems, restoring parks, rehabbing streets and working on major infrastructure projects across the board.

Some of the organizers behind the recent calls to unseat the “fossils,” the word used to describe the council on various hand-painted signs posted across the city since July 4, held a car caravan protest on July 17. One organizer said as many as 30 cars showed up to participate.