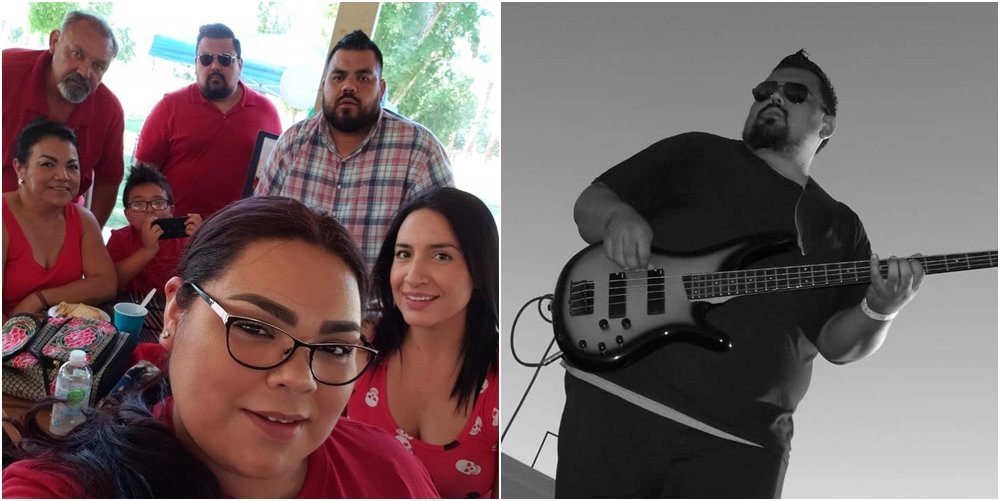 Four, and possibly five, of the seven Rosas family members shown in this family photo (left) came down with COVID-19 after a family get-together May 9, including brother, husband and father, Luis Rosas, who died June 14 from the illness. Shown are sister Melissa Rosas (foreground, and clockwise from left), her mother and father, Rosa and Jose Luis Rosas, brothers Luis and Edward Rosas, and Luis's wife, Anna Rosas, all of El Centro. Luis and Anna’s son, Diego, is the boy in the photo. The photo at right shows bassist Luis Rosas jamming with his band, Hijos Del Hombre. ROSAS FAMILY AND CHARLIE ZAMARRIPA PHOTOS
Home
COVID-19
In COVID-19Featured StoriesLocal News

The Rosas family’s story is becoming all too familiar in Imperial County, as waves of COVID infections spread among siblings, mothers and fathers, husbands and wives, some with more devastating effects than others.

For the Rosas family of El Centro, they know for certain that brother, father and son, Luis Rosas, 36, lost his battle with the virus on June 14, but according to sister, Melissa Rosas, it’s still a bit murky whether younger brother, Edward, 32, who tested negative for the virus but later died from pneumonia on May 29, might have succumbed to COVID-related complications as well.

Melissa, 29, is still recovering herself from a severe bout with the illness, which apparently started with Luis’ wife, Anna Rosas, who works at El Centro Regional Medical Center, which then spread to Luis, possibly Edward, and for certain spread to Melissa’s mother, Rosa, and Melissa’s girlfriend, who asked not to be named for this story.

Further illustrating the need for even the closest of family members to stay clear of each other during this pandemic, the transmission started with a backyard get-together on the night before Mother’s Day, Saturday, May 9.

Local public health officials have noted a community surge of cases can be traced to Mother’s Day weekend, when many families defied stay-at-home orders to party and celebrate with family members and friends.

“I want to let people know this is no joke. I lost two family members,” said Melissa, who spoke with this newspaper last week in an effort to prevent what happened to her family.

“I was like a lot of people who don’t take it seriously. I see a lot of my friends and family members out and about traveling, vacationing; it’s not time for that,” Melissa said.

Melissa, too, thought she might die as she lay in an Oceanside hospital breathing with the help of a ventilator. Not only was Melissa intubated, but so was her mother, Rosa, 59, who was treated in El Centro Regional Medical Center but rehabilitated in an El Cajon facility.

Luis died in ECRMC, while Edward died at home. Edward initially tested negative for the virus, but fell ill some days later, showed up at the El Centro ER and was sent home to be treated for his pneumonia, Melissa said. He had pre-existing conditions including obesity and diabetes, she said.

Luis’s wife, Anna, and Melissa’s girlfriend both recovered in isolation at home.

It has been a devastating experience for the Rosas family. Although Melissa said Anna spoke with a reporter early on from the national media, she has since declined to be interviewed on several occasions about her family’s ordeal due to how difficult the first interview was.

For Melissa, though, she wants to get the word out that even a casual get-together with just a few people can have tragic consequences.

Speaking through her daughter, Rosa Rosas agreed “that people need to be conscious of what they’re doing, about their decisions.

“She said this is going to be a very hard tragedy and journey (for the family),” Rosa said in Spanish through Melissa. “We’re still recovering from it.”

Melissa said the night of the get-together, Anna was already ill but did not know it. Melissa remembers sharing drinks with her brothers and sister-in-law, including drinking from Anna’s cup. Basically, everyone was tasting each other’s drinks and in close proximity with no face coverings.

Luis is survived by Anna, along with their 8-year-old son, Diego. And while Edward was single, the uncertainty around his manner of death has the musical community, of which Luis was heavily involved, raising funds for Luis and Edward through an online memorial concert July 25.

Details About “Jamming for Luis” July 25

Almost immediately after learning of Luis’ death, close friends Maricella “Chela” Moreno and Fernie and Brenda Ayon got the ball rolling for the benefit. With Anna’s blessing, Moreno and the Ayons knew who to ask for help.

Luis’ passing hit home for Moreno, who was compelled to act: “He deserves so much more,” she said.

She remembered how Luis’ band with long-time friend Aldo Arellano, known collectively as Hijos Del Hombre, volunteered to play for a music festival Moreno was a part of putting on during her time with local nonprofit organization, Friends of Kegger.

Luis’ passion for music (he was a bassist) and for promoting local bands led him to start a promotions group where bands could book shows. Luis and fellow Hijos Del Hombre band member and guitarist/vocalist Arellano formed the I.V. Music Collective to promote the music scene in the Valley. They had known each other for 10 years.

“What I am going to miss the most about (Luis) is his motivation and drive to accomplishing goals,” which Arellano said included helping nurture a hungry music scene here in the Imperial Valley.

One goal that Luis and Arellano had was recording under the Hijos Del Hombre moniker. The album has been recorded, Arellano said, and is now being produced and mixed by friend Ayon.

“It’s been hard to complete,” Arellano said. “It’s hard to listen to … I got chills all over my body. It was crazy, man.”

He goes on to express the difficulty he will have July 25 when he performs a solo acoustic set dedicated to Luis.

Ruben Hernandez, who will perform a solo set without his band mates in Los Esmiths, has also shared the stage with Hijos Del Hombre on several occasions.

It is during “times like these that (we prove that we are a) strong community … we come together, which Luis was all about,” Hernandez said. 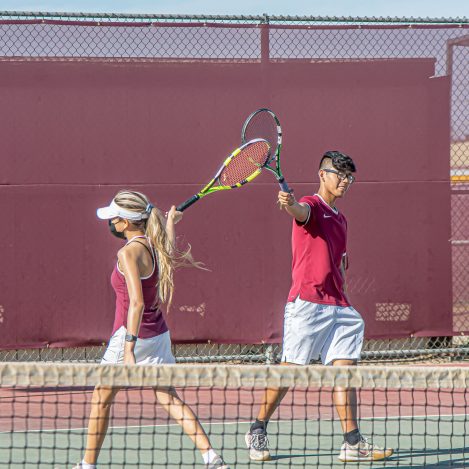