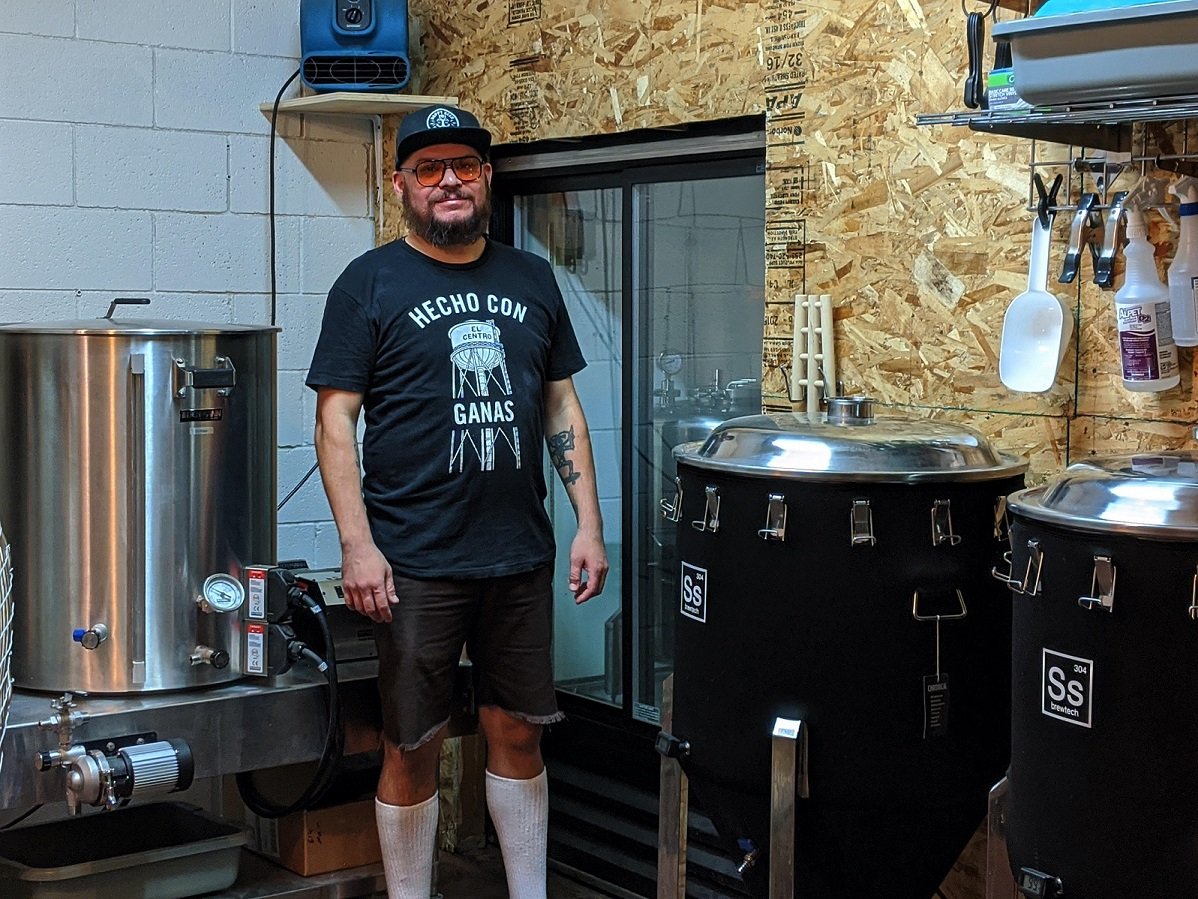 Ernesto Quintero, owner of Mexca (pronounced Mesh-ka) Brew Co., is shown alongside his second batch of craft beer, still fermenting in his brewery. Mexca is in the process of getting its new locations ready for its clients, and they are also preparing to debut their new tasting room. In the meantime, they will offer some of their services to go. Once opened, reservations will begin for you and your friends to enjoy a night, or day out. | COURTESY PHOTO
Home
Business
In BusinessFeatured StoriesLocal News

CALEXICO — Although it’s been some months in the making, the COVID pandemic is allowing business owner Ernesto “Ernie” Quintero, and his business and life partner, Jessica, some time to consolidate and rebrand their Strangers West restaurant and Strangers craft beer bar into a new direction under a new name: Mexca Brew Co.

Quintero started operations in 2012 with the beer bar on Fifth Street in downtown El Centro. Then, a few years later, he added Strangers West, a restaurant, in the 600 block of Main Street in El Centro.

Pronounced “Mesh-ka” Brew Co., the brewery is set to debut soon in a post-pandemic era, and unlike your average brewery, it plans to offer a little extra.

“Once bars are allowed to be opened again, we will finally open our new tasting room (Strangers’ bar location on Fifth), but until then we will continue to provide our goods via takeout,” Quintero said in a recent phone interview.

As an effort to abide by U.S. Centers for Disease Control and Prevention precautions, as well as state regulations, Mexca Brew Co. plans to only operate via curbside pick-up. This is done in an effort to not only limit the number of people that would potentially be in their brewery, but to help stem the spread of COVID-19.

“As of now, we have no plans to open up our doors again. Even if we get the green light to open again, we still plan to continue everything as carry-out for a little longer,” Quintero added. “We have officially been operating as a brewery for a while now, but we did not brew our first batch of beer up until a couple of months ago. Our very first batch was sold within its first weeks, and we now have our second batch is in the fermenter.”

Although they do not plan to open their doors to the public, they do plan to make their way into your home.

“A friend of mine suggested that I do virtual beer tasting (via Zoom) with people,” said Quintero, adding that in doing so he not only plans to get feedback but really just enjoy a beer with some of his recurring customers as well as new ones.

“We plan on having a steady supply of beer now. It has been very busy lately with all that is going on. To better accommodate and abide by regulations, we plan to have canned beers. They are already sealed and ready to rock,” Quintero said.

As they transition to a brewery, Quintero does not plan to change some of the traditional things about Strangers West.

“We won’t be changing much about it overall, but inside of the brewery we will have a Strangers Tasting Room to commemorate it,” he said. The tasting room is said to be a small section on the side of the brewery where they will offer their selection of beers.

“Once we have multiple beers on tap, we plan to provide our guests with a wide selection as well as talking to them about what they are drinking. We are basically beer nerds, and being able to make our own beer is a dream. That is why we will primarily be showcasing our own beer in this new tasting room,” Quintero said.

Under the Mexca Brew Co. there are two locations, their signature bar and now, their brewery with restaurant-like features.

“The bar on Fifth will serve as a tasting room for a while, far before we open up the brewery/restaurant for dining. We shall be sticking to our to-go options until further notice,” Quintero said.

Once the time is right and they are clear to open their doors again, Mexca Brew Co. plans to reserve seats for its customers to create an exclusive atmosphere while debuting their new tasting room.

“We plan on taking reservations for beer tastings. (In doing so) we would be able to keep a limited occupancy that way and give us time in between reservations to clean up and sanitize everything. I feel like that would also make for a better setting to talk about our beer with a super small group of people at a time and keep things intimate,” he added.

On top of the issues with COVID and the limited operation of his business, his partner, Jessica, was diagnosed with cancer. She has undergone treatment and is now entering an eight-week recovery phase. Jessica is the only person that runs the kitchen for Strangers West, which she has done for about four years now. With her being off for recovery, they decided to take things in a different direction in an effort both introduce new menu items and keep them afloat so she can focus on her recovery.

During these next eight weeks, their kitchen will be closed, limiting what they can offer to their customers. After seeing a high demand for T-shirts, Quintero decided to finally print and prepare them for sale.

“My partner has undergone treatment and is now in recovery from cancer. In this time, we are able to focus on the transition (of the brewery) as well as our beer,” he said. “The shirts and the beer are going to be sold to help us get by during this time.” With everything going on in the world this was just something else to tackle, Quintero said. He and Jessica have been going to the University of California San Diego Medical Center each week to follow up with her doctors in regards to her treatment. Quintero added that last week was her surgery and as of July 13, she is doing well.