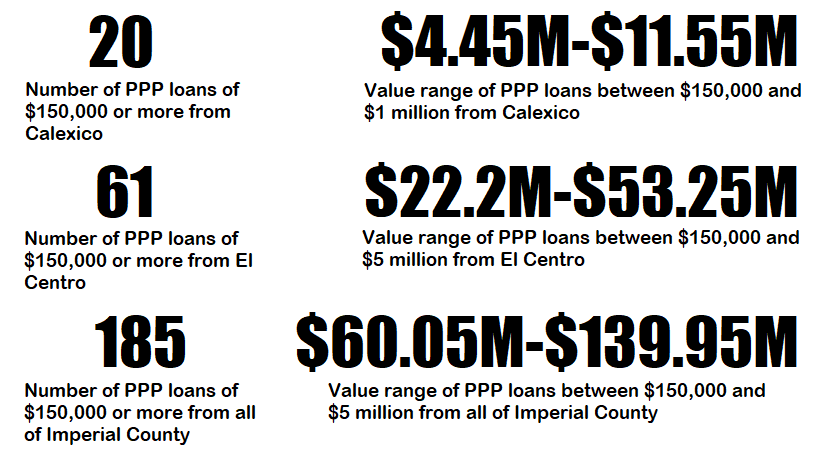 The information in this graphic comes from the ProPublica "Coronavirus Bailouts" searchable database using data from the U.S. Small Business Administration for lender-approved loans under the Paycheck Protection Program of at least $150,000. The federal government released data on loan approvals of less than $150,000, but that data was used to calculate summary figures for states only. Organizations with lender-approved loans of less than $150,000 do not appear in this data.
Home
COVID-19
In COVID-19Featured StoriesLocal NewsRegional News

PPP Loans Meant to Save Jobs For Local Businesses

The Paycheck Protection Program was designed to secure employees’ wages as businesses and other qualifying organizations, even churches, weather the economic effects of the COVID-19 pandemic.

“The No. 1 outcome of the PPP loans is to retain jobs, and that’s why the federal government created this program,” Imperial Valley Small Business Development Center Director Meredith Garcia said recently.

If you’re a local business that has received a PPP loan of $150,000 or more — the federal ceiling is $10 million — you can be found through a searchable database from information provided by the administrator of the program, the U.S. Small Business Administration.

However, if your business got a loan approved up to $150,000, the federal government has not required any reporting beyond a summary of numbers and amounts that do not breakdown beyond state levels.

Yet we know, through the sheer numbers of loans issued in California in total, that there were far more approved for Holtville and Calexico that are not required to report individually.

Figures for a community like Calexico, although it’s the second-largest city in Imperial County, show it doesn’t have the same types of businesses operating out of its borders that Holtville does. Holtville includes a number of farming operations that support many employees and earn millions of dollars in revenue annually, whereas in Calexico, many of the businesses that might have received loans are smaller operations, with fewer employees and annual revenues.

Maritza Hurtado, a tax specialist and community activist who runs Barron Enterprises in Calexico, assisted about a dozen business owners in Calexico with their PPP applications, the largest of which was $90,000, she said.

“Most of the businesses I helped had four, five, up to eight employees; some part-time workers, some minimum wage,” Hurtado said during an interview July 14.

She said the first round of loans experienced problems, with a lot of small businesses rejected initially after getting “clogged with people that didn’t understand the system and did not have the right documents ready.”

Further into the process, more businesses got consultants or found automated systems or banks that had more favorable outcomes.

The Economic Injury Disaster Loan (EIDL) program was designed to give working capital to small businesses, but Congress wanted to make a program to help employers maintain their employees by offering forgivable loans to cover payroll expenses, I.V. SBDC’s Garcia said, leading to the creation of the PPP.

When asked to share some of the local success stories she knows about, Garcia said she knows of many that she plans to publicly release once businesses agree to have their stories told.

Some criticism was that the first round of funding was consumed by big companies, taking high-dollar loans first and emptying the pot.

Congress announced a second round of PPP loans of which the due date has recently been extended to Aug. 8.

Garcia encouraged business owners to call her office — 760-312-9800 — if they have any questions about how to apply for the loan.

“Everything changes literally every day,” Garcia said. “If small businesses haven’t applied, they still have time to. It is important to maintain the purpose of that loans.”

The federal administration made a program requirement to share information about all loans over $150,000. The investigative journalism website ProPublica.org recently developed a searchable database that it is sharing with the journalism community around the country. The database can be found at https://projects.propublica.org/coronavirus/bailouts/

Among the loans accessible through the database for Holtville include Mainas Farms LLC, which received the largest PPP loan in the city — and one of the largest in the Valley — for between $2 million to $5 million to retain 101 jobs. The loan was through Mechanics Bank.

Holtville’s Vessey and Co. farms received a loan for $1 to $2 million. The database said zero jobs were retained and that the loan came through Well Fargo.

Calexico had no businesses approved above the $1 million range but did show seven approved loans between $350,000 and $1 million, including “Pastor of Our Lady Guadalupe,” which received a loan to retain 56 employees from Community Valley Bank.

In all, the largest loan amounts in Imperial County were between $2 million and $5 million, and there were five businesses that received those amounts, including Mainas Farms in Holtville. 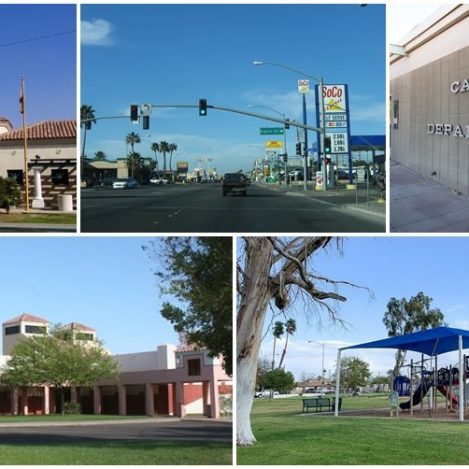 Calexico to Use $2.7M in Impact Fees on Capital Projects