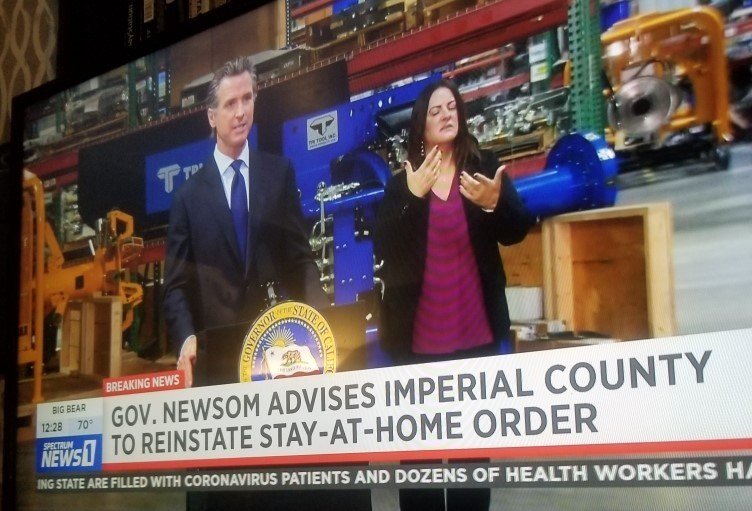 California Gov. Gavin Newsom during a live press conference June 26 in Los Angeles implored Imperial County public health officials to reinstate a stay-at-home order amid rising cases of COVID-19 in the county. County officials on June 29 sent a proposal to Newsom and state officials on how they can "toggle back." They are awaiting a response. | STAFF PHOTO
Home
COVID-19
In COVID-19Local NewsRegional News

IMPERIAL COUNTY — It’s been slightly more than a week since Gov. Gavin Newsom accepted Imperial County’s proposal to “toggle back” and scale down the opening of some nonessential businesses in the community as well as continue to “enforce” stay-at-home orders and the mandatory use of face coverings in public spaces.

While opinions continue to vary, what has not varied is the rapid spread of COVID-19 within the community, with the death toll speeding up in recent days and the rate of infection remaining consistently high.

County Public Health Department officials have made few public statements regarding COVID-19 in the community this past week, as the weekly Monday press conferences for the media to provide updates on the virus were canceled for a second consecutive week.

Meanwhile, as of July 8, there have been 125 COVID-related deaths reported. On July 2, the death toll broke 100 for the first time. There were 7,464 total COVID-positive cases reported in the county, with 1,059 active cases as of July 8.

Epidemiological stability, one of the state metrics the county has not been able to get a handle on in order to move further into the state and county’s Roadmap to Recovery, ticked upward in recent days, reaching 18.42 percent positives for those tested in a seven-day average as of July 8. It was 17.4 percent just a day earlier, up from around 11 percent over the several previous days.

In fact, cases all over the state have been surging in recent weeks, as the state puts the pressure of various counties to bring the spread under control by demanding counties step back on various openings of public spaces and businesses.

“The governor’s recent statements about moving back to Stage 1 (in Imperial County) makes sense. We have the highest rates in the state and something has to be done. But in saying this, I feel like I am agreeing to put a noose around my community’s neck,” said Lorenzo Ortiz of Brawley, who recently contracted COVID-19 working for a company installing electrical equipment at big-box stores around the state.

“I think I got COVID working in a Starbucks in the Bay Area. I had a fever, but it wasn’t as bad as the flu in December,” said Ortiz, who had one week left in quarantine when he spoke to this newspaper.

Ortiz, who said he was struggling in isolation and missing his children, said the United States needs to close the border to improve its COVID numbers.

In essence, Mexicali officials have done the same to the United States, turning back motorists for various COVID-related reasons during a series of checkpoints at the southbound ports of entry there in recent weeks. Hundreds of people were sent back to Imperial County over of the Independence Day weekend, it was reported.

“I’m torn about the conversation between the county and the state to move back to Stage 1. I believe in COVID, but I am skeptical about our numbers and how accurate our data is. Supposedly with people bringing the virus over from Mexico are increasing our numbers,” said Lisa Martinez, owner of Desert Yoga and Wellness and a mother of three.

“We want to plan a trip for our family to Mexico, but it’s hard to plan when you don’t know what the future will hold for the Imperial Valley,” Martinez said. “I am responsible as a parent protecting my family and want to be responsible as a business owner, but I can’t keep my business open like this forever, and other local businesses (can’t) last any longer, either.”

Martinez said she pays $1,000 in rent for her business and is left unable to pay even that after the quarantine drove her customer base to 25 percent of its norm, as she is only allowed to offer classes via Zoom.

Since last week’s compromise between the county and the state, it’s been clear some businesses have decided just to close down altogether rather than continue in yet another modified fashion. The real changes for nonessential retailers who were allowed to re-open to limited foot traffic some weeks ago through the order of Newsom himself, have been told to return to curbside delivery-only.

Social media postings are revealing some of those nonessential businesses have decided just to close, and some local restaurants, likely anticipating a fuller re-opening several weeks ago, in recent days have said their goodbyes via Facebook and Instagram accounts.

“I don’t want to criticize the way the county is handling the situation in regards to moving back to Stage 1,” said Dr. Andrew Martino of Imperial Valley Chiropractic in Imperial. “It seems like the whole argument is happening because we are being invaded by a virus that we need to eradicate, and you need time to do that. You need time to have an auto-immune response and everyone needs to have that immune response, which takes time.”

Martino urged people to think about something federal, state and local health officials are not talking about, the strength of their immune system.

“Focusing on building a stronger immunity still makes sense to me. Focusing on a healthy lifestyle and making sure your body gets enough rest are very important and chiropractic is essential to that,” Martino said.

Rene Ruiz of El Centro just returned to the Valley on July 1 having completed a cross-country drive to St. Louis, Missouri, helping a friend move.

During his trip, Ruiz said he was able to survey how different states across the nation are handling the COVID resurgence now underway.

“What I’ve seen is that the way different states handle the COVID situation was very similar to here. In some states, stores posted on their doors that customers need to wear masks but left the decision up to their customers’ discretion.”

“I feel that things should be allowed to stay as is, and I think that people should be allowed to make their own decisions regarding whether to wear a mask or not,” Ruiz said. “COVID is eventually gonna go away regardless whether we stay home or go out, but business still need people to interact with to stay open.”

Imperial County government and public health officials held a press conference the evening of July 1 to announce that Newsom had accepted the county’s 13-point plan to respond to COVID. During the conference, county Public Health Officer, Dr. Stephen Munday, explained there was no true return to Stage 1, and that really there were only two significant changes to what the county was already doing.

“We had meetings over the weekend (June 27 and 28) with state officials and received guidance, did research and used that to make amendments to our Roadmap to Recovery,” Munday said.

The major changes in the plan had to do with non-essential retail businesses, churches, and parks, Munday said, highlighting the biggest modifications to the original plan placed the county somewhere between the Stage 2A the county was already on in its roadmap and Stage 1.

Imperial County District 1 Supervisor Jesus Escobar characterized the proposal during a brief conversation with the Calexico Chronicle on June 30 as “a tweener” between stages 1 and low-risk 2.

In-store shopping of non-essential retail businesses will be ended and now limited to curbside pickup only; churches will be limited to outdoor services only; and all county parks will be closed, Munday said.

Previously, churches had been allowed to resume in-door services at 25 percent building capacity with social-distancing rules and face coverings, or limited to 100 people in the building, whichever number was smaller.

“Face coverings will be required, and they are not intended to replace social distancing. All non-essential gatherings of any size are not permitted,” said Munday, who encouraged all non-essential businesses to utilize telecommuting for its workforce as much as possible.

Season’s Greetings All Over the Place

“For our efforts to be successful, we require the support of all local city leaders. Restrictions related to COVID-19 have become necessary so we can protect our family, friends and neighbors,” Imperial County Board of Supervisors’ Chairman Luis Plancarte said, urging residents to wear a mask and avoid gathering during the Independence Day weekend.

Plancarte encouraged residents to be conscious of the “three Cs” to help remember the risks COVID-19 poses and how to go about protecting themselves.

Although they have not been contacted since, the night of the county’s announcement, July 1, Imperial Valley Business Recovery Task Force officials declined comment on the 13-point plan and Newsom’s acceptance of it.

The morning after the county’s press conference, July 2, Flores send a statement through email.

“Supervisor Plancarte sought credit for county leadership, but community members remember that just a week ago their preoccupation, stated two official communications to the governor, was in skipping ahead of state guidelines for reopening. Supervisor Plancarte asked, ‘What have we learned in the last few weeks?’ One lesson is that it took a threat from the Governor for the county to implement restrictions amid the highest COVID spike in the state,” Flores’ group stated.

“We are optimistic by the Board of Supervisors’ inclusion of a commitment to engaging community groups, many working with hard to reach populations and advocating for expanded economic protections like an eviction moratorium. However, the ‘closed session’ discussions on Friday (June 26) and Monday (June 29), meant that their measures were arrived at with no community input or transparency. Supervisor Plancarte’s answer to the question, citing ‘a threat to public services’ (as the reason to going into executive session per the provisions of the Brown Act, California’s open meetings law) was evasive to the root issue of a lack of transparency in the board’s response,” Flores’ group’s statement continued.

“More substantively, our coalition is dissatisfied with the strategy of ‘encouraging’ that all the measures are framed by. (‘Strongly encourage businesses to enforce face coverings …. Strongly encourage families… Encourage telecommuting…’ etc). The measures make no reference to mechanisms for accountability, for cities and employers for adhering to public health guidelines. This was a missed opportunity to — following the Governor’s example — tie accountability to business relief, to city funds, and to, as the governor did, signal the seriousness of the  recommendations by committing to county action should cities and employers fail to abide. With the crisis of our magnitude we are not looking for mere encouragements, but for bold leadership and clear mechanisms for accountability,” according to the statement.

Supervisor Escobar did address those latter concerns during a June 30 interview with this newspaper.

He said he also did not like the terms to “encourage” and “strongly recommended,” but he said those were issues that had everything to do with the county’s ability to enforce the health order with limited resources and funding.

He said one thing was, the county requested additional assistance in enforcing the health order, whether through financial support or manpower. It isn’t clear if those resources are being considered. 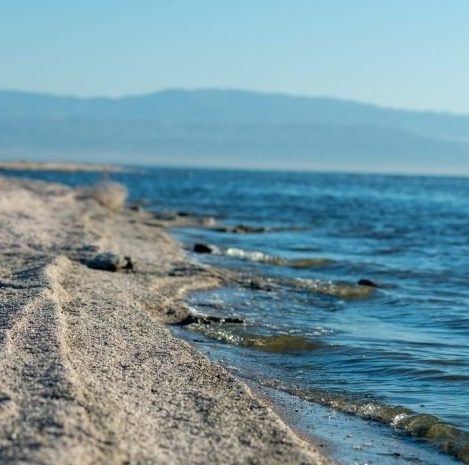