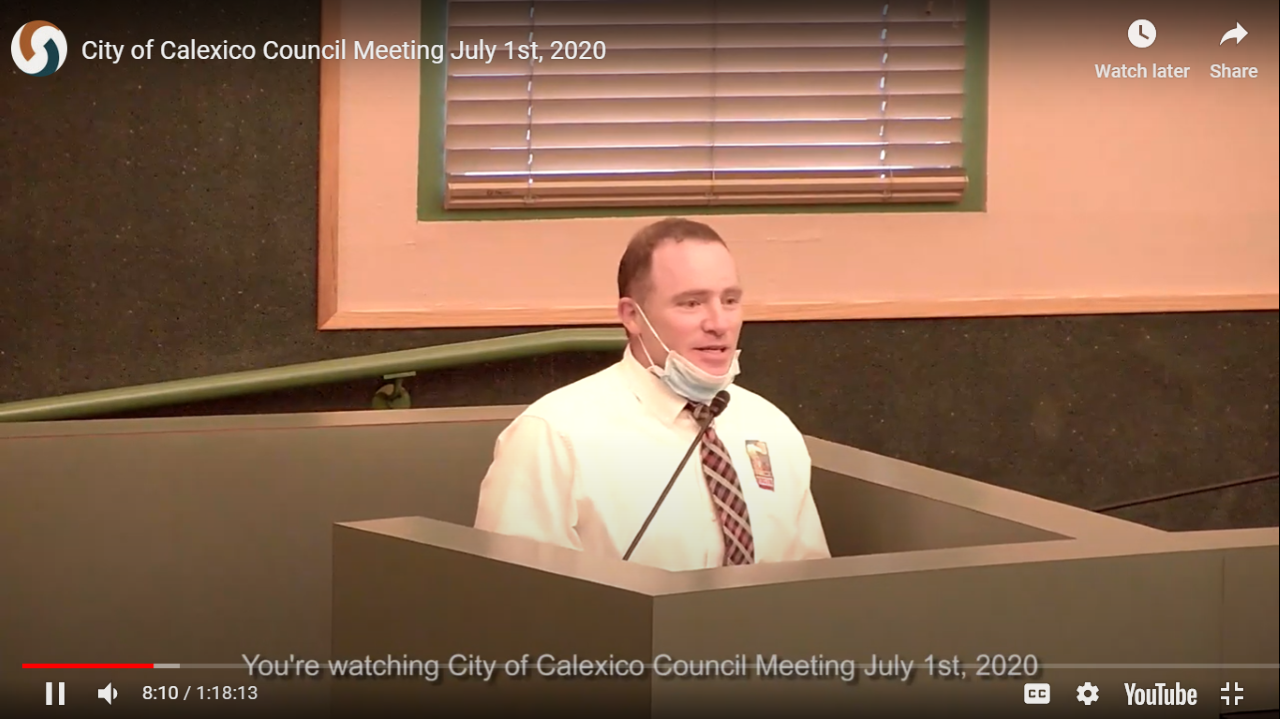 Calexico City Manager David Dale resigns during the city manager's report segment of the July 1 council meeting amid allegations he was "double-dipping," a charge he vehemently denied. Dale went on to announce he would be leaving effective Aug. 1 to take on another job. | SCREEN GRAB OF CITY COUNCIL MEETING
Home
Local News
In Local News

“Former City Manager Armando Villa was instrumental in beginning to change the financial course for the city of Calexico. Coming to his position in June 2016, Villa began to tackle difficult operational and personnel issues to bring much-needed relief to city operations. Mr. Villa set the foundation for the work that is now being implemented and shares a piece of the accolades achieved in recent times,” Figueroa said July 7.

“Although there continues to be a need to help the small business community, as well as other tax-revenue-generating groups in the city’s economy, the work performed by the city of Calexico since 2016 has proven to be instrumental to bring back life to a feeble economy,” he added.

In that equation has been Dale, who was brought on board to replace Villa in 2017, around the same time that Figueroa was hired away from the county of Imperial to develop Calexico’s economic development plan, which has continued to unfold.

Figueroa, who was named permanent city manager on July 1 by the Calexico City Council after learning of Dale’s resignation, said Dale was a key figure in restoring Calexico to fiscal solvency following a 2016 budget in which the city was in a $4 million general fund hole.

Even with the economic effects of COVID, the city of Calexico is expecting to finish to consecutive fiscal years with positive end balances to its general fund budgets, including building up its cash reserves for a rainy day. The city recently started the 2020-2021 fiscal year on July 1.

Although there is more come on Dale’s resignation, Figueroa spoke with the Calexico Chronicle on July 7 to talk about plotting a course forward for the city that will build on the repaired relationships among state and federal agencies that will include a similar approach to segments of the community.

“We understand there is a lot of frustration in our community that they can feel they cannot work with our city,” he said. “The same way we were mending relationships and building bridges with some of the government agencies is the same goal we have to reach with our community.

“We can get there if we work hand in hand,” Figueroa added.

It’s going to be a lot of showing rather than saying, he indicated.

Similarly, Figueroa said the state was shown over the years that Calexico could be trusted with recovering financially, working to restore accountability and being proactive to bring in support and stakeholders to attempt to solve issues like pollution at the New River, and getting healthy enough to seek grant funding again, as evidenced by the $8.5 million state grant the city earned for Heber Park.

He said moving forward the city will aim to build on its record of economic development in bringing to fruit a number of projects in different phases of development that will enhance the tax base and create jobs. Figueroa said some of that was revealed in the last year as new businesses returned to the city.

Figueroa said his goal is to increase revenue to restore city employees that will allow the city to enhance its services.

“We’re going to surround our great team with employees who are experienced and knowledgeable to work to make this city better,” he said.

To reiterate, two of Figueroa’s focuses will be economic development and restoring “trust” within the community.

Meanwhile, on July 1, in what was intended to be an uneventful Calexico City Council meeting in which a new mayor and a new council member was to be sworn in, a more serious tone was sounded when Dale resigned after three years on the job.

His resignation becomes effective Aug. 1, when Figueroa is set to take over as his permanent replacement.

Dale had come under fire from certain community members in recent weeks, not only for allegations of double-dipping on the job, but as a surrogate and part of a corrupt City Hall in the wake of David Romero’s indictment and guilty plea for accepting bribes from an undercover federal agent.

“I notified the council Wednesday night (July 1) that I formally and respectfully submitted a resignation from my position as city manager. I was recently offered an opportunity to return to civil engineering and have decided to take the offer. This opportunity will allow me to continue to serve others,” Dale said, reading from a prepared statement during city manager reports at the start of the meeting.

“I’ve been able to surround myself with truly dedicated, capable department heads and great employees. I love this city that has so much potential. That is one reason it was a difficult decision to make,” he said. “I truly appreciate and value my time spent at the city and the relationships that were formed, but I am also excited to embark on this new journey.

Dale’s news was learned when City Attorney Carlos Campos reported out of closed session that Dale had resigned, and the council unanimously voted to appoint Figueroa as the new city manager.

Figueroa said July 7 that he and the city are still negotiating the terms of his employment contract, which will be ratified at an upcoming council meeting.

The acrimony referred to Dale’s resignation, where he references what amounts to his weak stomach for some of the ongoing politics thrust upon City Hall by outside forces, which will likely get worse in the coming weeks as the filing period for four seats on the Calexico City Council open in late July for the Nov. 3 general election.

Council members Bill Hodge, Lewis Pacheco and Morris Reisen have all said they will fight to defend their open seats in the election, while the seat now held by appointee Camilo Garcia will be subject to a two-year short-term election after former council member Romero vacated his seat with more than half his term remaining. Garcia, whose current term expires in December, said he will seek election of the short-term seat as well.

Dale talked up some of the highlights of his time on the job July 1 before addressing the critics who became too much for him to bear.

“Together, we have changed the direction of the city. We have erased a massive deficit and negative balance in the general fund. What was a negative balance of $4 million at one point, is now positive with projected reserves. In 2017, most of the department heads were interim or acting. We did not have a formal city clerk position. Now, under our leadership, we have qualified department heads working in unity to make this city better,” Dale said.

“Critics of public servants come from all walks of life. The First Amendment is key to our American society. It is extremely important and should be protected. Public servants should be held to a high standard. However, what we are seeing today in politics locally and across the nation is some people making up stories for political gain or agendas, without concern for the possible damage to the personal lives that are affected,” the city manager said, as he became to answer his accusations.

“A true critic will not resort to name-calling or make personal slanderous remarks. A person with true intentions on the betterment of the agency will also acknowledge the good things that are occurring. Critics that have hidden agendas will throw all the mud they can to see what sticks. They will lie, call names, there are no boundaries. The mud that doesn’t stick is ignored,” he added.

It’s not clear all that Dale was referring to, but among the biggest complaints against him were allegations in two late June Probe columns in the Imperial Valley Press that Dale was working under a paid contract for his former employer, Borrego Water District, while still drawing a paycheck from the city of Calexico.

Dale answered once that the assertion was not true and that he did not get paid for work he did because a contract was never signed by him. The issue was brought up again a day or so letter when the letter writer to Probe said Dale lied in the answer.

The Calexico Chronicle received the same complaints, and Dale also denied the allegations to the Chronicle.

Dale, city staff and the City Council had also come under fire over the last several weeks when former council member Romero and his political appointee, Bruno Soto-Suarez, were indicted and later pleaded guilty to accepting $35,000 in bribes to fast-track a cannabis permit.

Romero indicated to the undercover FBI agent and to prosecutors that they had taken bribes before.

During the July 1 meeting, council members thanked Dale for the work he had done to help right the city over the course of his three years, and they also congratulated Figueroa, saying they expected more good things to come the city’s way under Figueroa’s leadership. 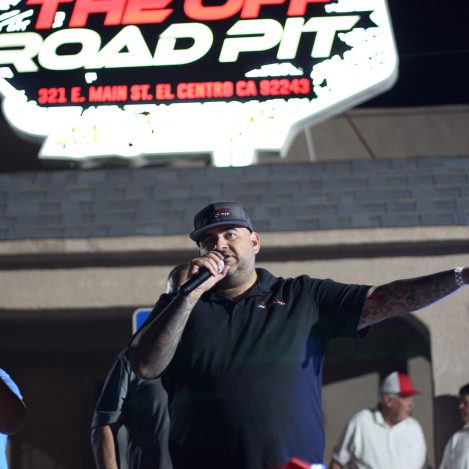