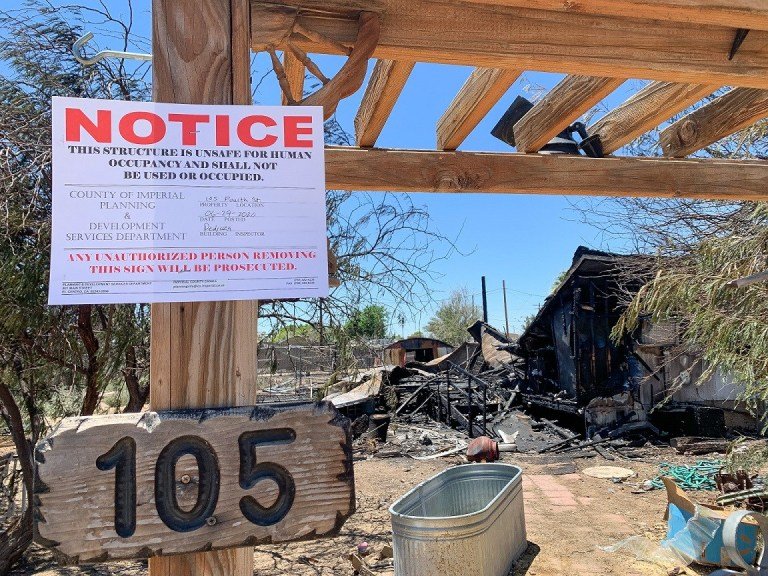 A sign posted by the Imperial County building department condemns one of the 30-plus destroyed homes in Niland the morning of June 29, after a fire swept through much of the community June 28, leaving one dead, more than 150 people displaced and 40-plus families without homes. | CORISSA IBARRA PHOTO
Home
Regional News
In Regional News

NILAND — As much as $100,000 is available to help Niland residents impacted by the June 28 fire that destroyed a huge swath of the community and razed some 40 structures.

However, an exact amount that will be needed for those who lost everything won’t be known for a while, Imperial County Executive Officer Tony Rouhotas Jr. said.

More than 150 residents were displaced and 38 properties were affected after a fire swept through the township. The fire was a major topic of discussion at the county Board of Supervisors meeting July 7, with board members talking about the situation, thanking the community for its support of the residents and thinking of ways to keep the overgrown grass throughout the county from causing similar problems in the future.

The board also voted 4-0 to utilize up to $100,000 of Community Benefits Funds to assist those affected by the fire as well as ratifying a proclamation declaring a local emergency. Chairman Luis Plancarte had to leave the meeting early and wasn’t able to vote on either issue.

This is not as simple as a regular emergency where a shelter can be set up, Rouhotas said. With COVID-19 and six-foot social distancing requirements, it’s not feasible to have a shelter for those affected.

The immediate concern is housing and food vouchers, he said. There are partnerships with local agencies to work on this, but some of those vouchers are going to be expended quickly.

“The goal is to make sure people don’t become homeless,” he said, adding it will help “expedite them back to some normalcy of life.”

District 1 Supervisor Jesus Escobar said he was in favor of the funds going to help those in need, but he pushed county staff to set a specific dollar amount before voting.

Deputy County Executive Officer Esperanza Colio said the goal is to continue to look at state funding to help offset hotel vouchers. It could cost as much as $72,000 to house 30 families for one month, and more individuals than that are in need. The funds approved July 7 would go toward housing and cleaning up the site of the fire.

Rouhotas added that he would be comfortable setting a limit of $100,000, as more could be added if needed later.

District 4 Supervisor Ryan Kelley, who represents Niland and much of the north county, questioned staff about how quickly cleanup could start and how to address transportation issues as many lost vehicles in the fire.

While no timeline has been set, Jeff Lamoure, deputy director of environmental health, said a hazardous waste assessment can happen within a day, and the actual cleanup could take between seven and 10 days. A timeline should be available for the supervisors next week.

Staff also said they would contact transportation authorities to work on getting access for those who need it. 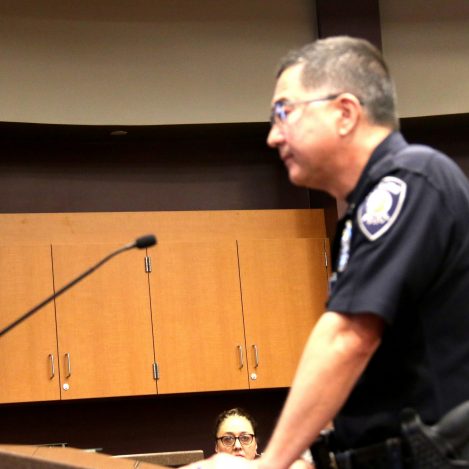