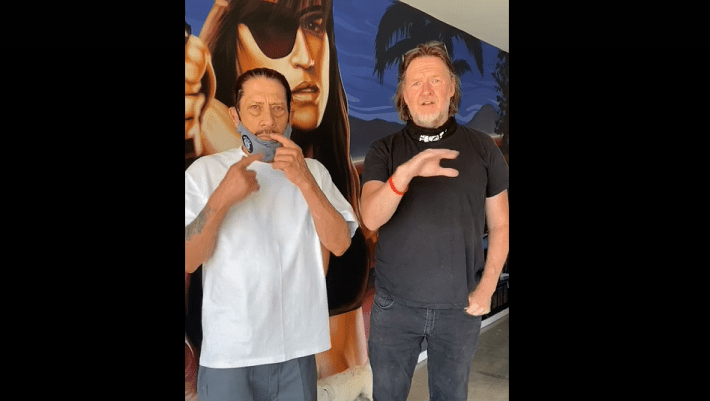 The executive director of the Imperial County Medical Society got the idea to use celebrities to compel the public to wear face-coverings after reading a story about Los Lobos’ Louie Perez addressing Aurora High students during the Calexico school’s virtual graduation ceremony a couple weeks ago.

“When I read your story (on Aurora), I thought, ‘That’s what I want to do,’” Henderson said, and he reached out to the Calexico Chronicle a few days later to get in touch with Aurora Principal John Moreno, who was able to get Perez as a commencement speaker through his cousin, former Calexico resident Romina Carrillo Gutierrez.

Phone numbers were passed from Moreno through the Chronicle to Henderson, and Perez and the rest of the band famous for its rocked-up rendition of Ritchie Valens’ version of “La Bamba” were on board.

On the other side, Henderson relied on his decades-long career as an educator, much of which was teaching world history at Wilson Junior High in El Centro, to reach Logue through one of Logue’s relatives who Henderson would rather not name. Logue, a Central Union High School graduate, agreed as well.

The well-respected character actor probably best known in recent years for his five-year run as “Harvey Bullock” on the CW’s Batman prequel, “Gotham,” in addition to hundreds of scene-stealing roles, spent much of his grade-school years in Calexico and El Centro. In taking on the PSA, Logue pulled in the help of iconic Mexican-American actor Danny Trejo, well-known for his title role in action film, “Machete.”

Like we said, Henderson’s seemingly impossible accomplishment took mere days to put together due to its resemblance to something like “Six Degrees of Kevin Bacon,” the parlor game based on the humorous idea that any two people/movies/(insert noun) on Earth are six or fewer links away from something to do with prolific and arbitrary actor Kevin Bacon.

“People in their 20s and 30s and 40s, they’re tired of hearing politicians” talk about wearing masks, Henderson said recently, “so I figured why not go to celebrities” to disseminate the message and help stop the spread of COVID-19.

In the next few days, a total of three PSAs should be up and widely shared on websites and Facebook pages from not only local sources, like the Imperial County Public Health Department and Henderson’s own medical society, but through the California Medical Association, the Los Angeles County Medical Association and a myriad other sources.

Henderson said he is pleased to see it all worked out, mentioning that initially one medical association dismissed his idea outright.

What a silly notion, considering the viral reach Logue and Trejo’s more rough-hewn PSA has had. Henderson wanted to control the flow a bit better with the PSAs, but considering he never spoke directly with Logue the way he did with Perez, Logue’s PSA took on a life of its own rather quickly.

With only an email of points to hit, Logue apparently improvised much of his spot with Trejo while on location in Northern California and shared it directly to his personal Facebook page July 5, Henderson said.

Wrote Logue: “Tom Henderson from the Imperial Valley Health Association reached out to me to do a PSA with @officialdannytrejo . My hometown of El Centro was just featured on MSNBC for how terrible the Covid infection rates are in Imperial County. … Viruses are apolitical — they don’t care what country you are from, or if you are white, black, brown, pink, or blue. They don’t care about rights, they just want to make copies of themselves. Masks reduce their chances of doing that dramatically. Yes, older people are more significantly affected than the young, but the young are spreaders. And from friends who are doctors and respiratory therapists, it’s an agonizing ordeal (or death) you wouldn’t wish on your worst enemy. This ain’t Koolaid sh**- Be safe, live your life, just wear a mask when out and about and wash your hands! Let’s stop this F***** from spreading.”

In the 27-second video, Logue name checks Imperial County and El Centro and says Imperial has six times the infection rate of any California county, while Trejo implores to the public to wear “una mascara,” pulling up a cloth face mask, before hilariously putting on his head a full vinyl “Danny Trejo” Halloween mask.

If you doubt the power of social media, as of the evening of July 8, Logue had 35,000 views from his personal site alone and some 851 shares.

The Los Lobos spots, one in English and one in Spanish, were a little more produced and had a script initially written by Henderson, to which Perez and four of his bandmates added their own seasoning. Those spots began appearing July 8 and were to be more widely released in the ensuing days, Henderson said.

Perez briefly spoke with this newspaper July 8 to say it was the band’s honor to work with “heroes” on the frontlines in Imperial County like Henderson and others trying to make the public safer.

“We had a great time doing it, and we felt really good about being of service, especially for people of our own culture and communities being disproportionately devastated by this disease,” Perez said.

Featured in the Los Lobos video is the Imperial County Medical Society logo, the song “La Bamba” in the background, and members Perez, David Hidalgo, Steve Berlin, Conrad Lozano and Enrique “Bugs” Gonzalez telling the public to “Put It On!” regarding facial coverings. However, they also advise people to practice social distancing and use hand sanitizer.

Perez said final founding member Cesar Rosas was not available for the video shoot, which was filmed on Zoom and edited by Berlin’s daughter, Isabelle “Izzy” Berlin.

“I told Tom, just tell us what else we can do,” Perez said, adding that “everybody in the band just stepped up to do this.”

“It’s a funny world we live in,” Perez said, “when the heroes are now the clerks that check us out at the supermarket … rightly so, they are the essential workers.”

Formed in 1973 in East Los Angeles, the core of the group has married varied styles of music and crossed genres over time from “Chicano rock”/roots rock, soul and rhythm and blues to traditional styles like cumbias, norteños and boleros. They’ve sold hundreds of thousands of copies of their albums over their career, reaching their commercial pinnacle with 1987’s “La Bamba” soundtrack. Los Lobos has 1.75 million monthly listeners on Spotify.

Previous
Central American Refugees and Their Problems Compound at the Border 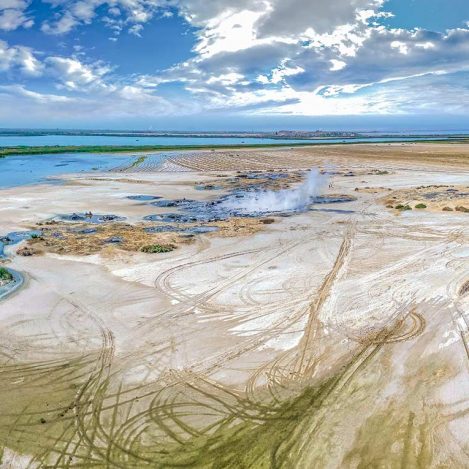 Lithium Valley: A Look at the Potential of Lithium