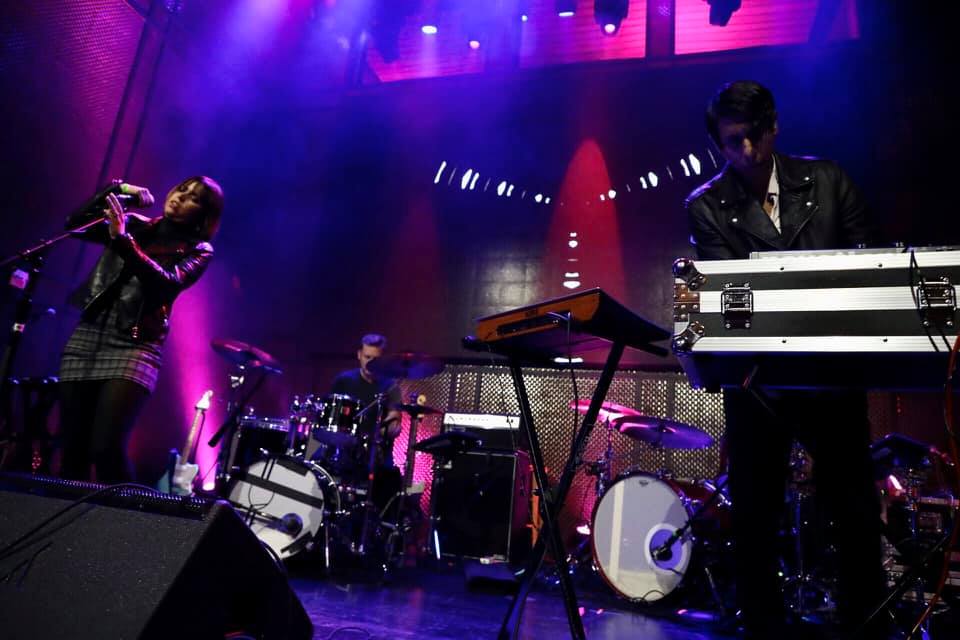 CALEXICO — In the late 2000s/early 2010s, Calexico skater Anthony Ramirez was determined to make a live band from the electronic and dance-punk influences he was feeling in the clubs in Mexicali.

Not really a musician at the time, Ramirez felt compelled to emulate and fuse the sounds of what was inspiring him at the time, mainly the bass- and guitar-driven dance-punk of Mexicali indie rockers Noise Beat Propaganda and the vibrant DJ-heavy electronic scene happening there.

“I used to skate the streets of Calexico and listen to music that came out on skate videos,” Ramirez recalled. “I started listening to groups like Mstrkrft that came to play in Mexicali. I wanted to start a project like that; however, I wanted to make it a live band.”

He would bring these elements into his own music as Ramirez and various Calexico friends molded their own sound in the garages and living rooms of Calexico-Imperial Valley during and after his time as a student at Calexico High School. Ramirez was a Bulldog from the class of 2006.

Ramirez’s current band, Glass Spells, which is based fully in San Diego but was born in this border city, is a fitting representation of those early inspirations.

Described on its own promotional materials as “disco goth” centered around “funky basslines, dance beats and piercing synths” with “infectious female vocals,” the trio Glass Spells is the perfect amalgam of Toronto, Canada-based Mstrkrft’s time-tested electronica and Noise Beat Propaganda, a post-punk outfit who during its heyday was fronted by a female vocalist and relied heavily on the pulsating sound of a funky-yet-slightly overdriven bass guitar.

Bass and synth are Ramirez’s weapons of choice.

One can hear those influences loud and clear on some of Ramirez’s early efforts, like his Calexico-based, pre-Glass Spells project Therapist, which has a tightly produced video floating around YouTube for its 2012 original song “Suicide Box,” a single very much in the vein of Noise Beat Propaganda.

Today, however, Ramirez’s focus is on Glass Spells, which after a one-year hiatus, came back strongly in 2019 and recently released an EP of new music on June 26, “Mirrors,” a five-song recording available on all the big streaming music services, like Spotify, Apple Music, and Bandcamp, to name a few.

“We’ve actually been working on a lot of new music. We hope that after COVID gets under control, we can continue to play shows and hopefully go on a small tour,” Ramirez recently stated in an interview with this newspaper.

“I feel like our sound before would only appeal to a certain crowd; it was more aggressive with heavy bass guitar,” Ramirez shared. “Our new sound and songs now can appeal to different people that like different genres. You can dance to them, listen to them while driving, or just hanging out.”

“Mirrors” is led by the eponymous single, “Mirrors,” which was released back in September 2019, but has had nearly 23,000 streams on Spotify. Glass Spells has about 4,000 monthly listeners on the streaming service, and Ramirez said the group has found a following of sorts in Bern, Switzerland (Spotify can identify where the most people are listening from).

The song “Mirrors” does have a much more accessible sound, with dreamy female vocals, cascading synths and a danceable disco beat rife with undeniable pop hooks in the simple chorus calling the listener to “Wake up now.”

Ramirez is hopeful “Mirrors,” the EP, has legs to outlast the pandemic so the group can take its music to the masses and capitalize on the positive response the group has gotten over the last year, including being featured on “Local Break,” San Diego’s vehicle for local artists on the popular alternative radio station, “91X” (91.1 FM).

Getting to this point has been quite a journey for Ramirez, who is the only original or local member left of Glass Spells, which started in Calexico in 2014.

While in high school in the mid-“aughts,” or 2000s, he wanted to learn an instrument so he could realize his burgeoning musical vision.

“I never really thought I could play an instrument because I used to watch bands play, but eventually just going to shows I thought maybe I could do that,” Ramirez said. “My friend convinced me to buy his bass. At first, I said no, because I didn’t play. But I asked my parents if they would buy it, and they did, and that’s how I started.”

For some years, Ramirez played in a mix of cover bands and original projects, such as The Ascenders and Therapist, before starting Glass Spells. While Therapist was clearly a first attempt at that electronic-influenced sound through live instrumentation, with its female vocalist, hi-hat-heavy, bass-drum-and-snare-oriented dance rhythm and Ramirez’s own frenetic bass style, he wanted something more electronic in its vibe.

“I wrote some songs and shared them with friends, (Valley natives and locals) drummer Mallory Garcia and singer Mellany Martinez, who added to them, and synth player Michael Rascon and Suz Gonzales contributed as well,” Ramirez said.

This was how Glass Spells got its start, but the group faced challenges because there was not much of a music scene in the Imperial Valley.

“There wasn’t a venue to play in. I feel that was a big struggle for me, so we would have to play in Mexicali, or drive to San Diego,” Ramirez said. “The only place I started booking shows in the Imperial Valley was Strangers bar in El Centro.”

After Glass Spells released its debut single, “I Feel It,” in 2014, the group went through other changes when vocalist Martinez was replaced by Suz Gonzalez.

In 2016, the band was getting some notice. The San Diego Reader reported on how they were recording a self-titled album at Emprise Soundlab studios in Mexicali with musician and composer Gerardo Montoya. Then in April, the band premiered a new single, “Rebellion,” followed in May by a video for the song, “Away From Space,” and the album release in September.

Although there was much going on creatively, behind the scenes it was more difficult. Singer Gonzalez, keyboard player Rascon, drummer Garcia and Ramirez were living in different cities, which led to the eventual break-up of the band.

“The band went through some changes, we stopped playing shows, and stopped writing music in 2018. It was hard for us to get together and work on music when we were all living in different cities, so we decided to stop,” Ramirez said.

“It’s a lot of hard work to be a musician. You go through a lot of challenges. You need to do a lot of networking to try to get a show and get noticed,” he said. “The bands in San Diego practice a lot, like once a week, and do a lot of work together, and that was one of the challenges, that we lived in different cities, and it was hard for us to get a band practice.”

A new version of Glass Spells would be brought back to life in 2019.

“A friend of mine gave me advice and said to continue doing what I like to do. In 2019, I reached out to Tania (Costello), who was part of my circle of friends in San Diego, with new music I had written for Glass Spells,” Ramirez said. “I asked Michael Buehl, who is also in my other band, Twin Ritual, if he wanted to play drums.”

Since reconstituting, Glass Spells has not let up, playing live shows, releasing new music, and growing its audience and acclaim.

“We are excited to have already gotten such a great response,” Ramirez said.

Between 2016 and 2020, Glass Spells’ sound has changed quite a bit to the discerning electronica listener. It’s angular, post-punk early singles have given away to a more ethereal, dreamy pop aesthetic at times, but it’s always been slightly detached and dark, highly danceable, and truly modern-sounding to its core.

Ramirez shared a bit of his creative process for how he composes music.

“I’ll randomly think of a lyric or I’ll imagine or remember a scene of a movie or TV show … then I just play a melody on the keyboard, and hum it myself … and build from there, or if I make a bass line, and from the bass line I’ll add the melody,” Ramirez said. “Sometimes it is something visual. I’ll imagine playing it, so then I’ll run to the computer and sit down and record what I am thinking of.”

“I see (music) like an empty sculpture, and then add layers,” Ramirez said. “I’ve always created my music to reflect what I’m doing at the time. As I change, my music changes, too, and as I learn more, I use it to create new sounds.”

As Glass Spells continues to grow, Ramirez said he wants to reach as many people as possible and get the group’s music on films and TV shows.

Bandmate and vocalist Costello, of San Diego, has similar aspirations.

“My aim is to make songs people can relate and dance to. I want to create music people can sing along to and have a good time while doing it,” she said.

By being the lyricist to the music Ramirez composes, Costello works closely with him. Her lyrics are inspired by her past experiences, as well as the feelings she gets when she listens to what Ramirez has composed.

“Whatever the music makes me feel, I write about,” Costello said. “Sometimes, Anthony will come up with a lyric or two, and I put my own spin to it.”

For Ramirez, music has opened doors for him that he never thought possible, including the chance to travel and share his craft with others.

“I’ve met a lot of people through playing music that I might have never met, and I’ve been able to travel and play for people I never thought I would,” he said. “It has been nice to be able to play in different cities. “Music for me is a way to be creative and is a good way to express yourself and challenge yourself to do better by learning new tricks and advancing,” he added.