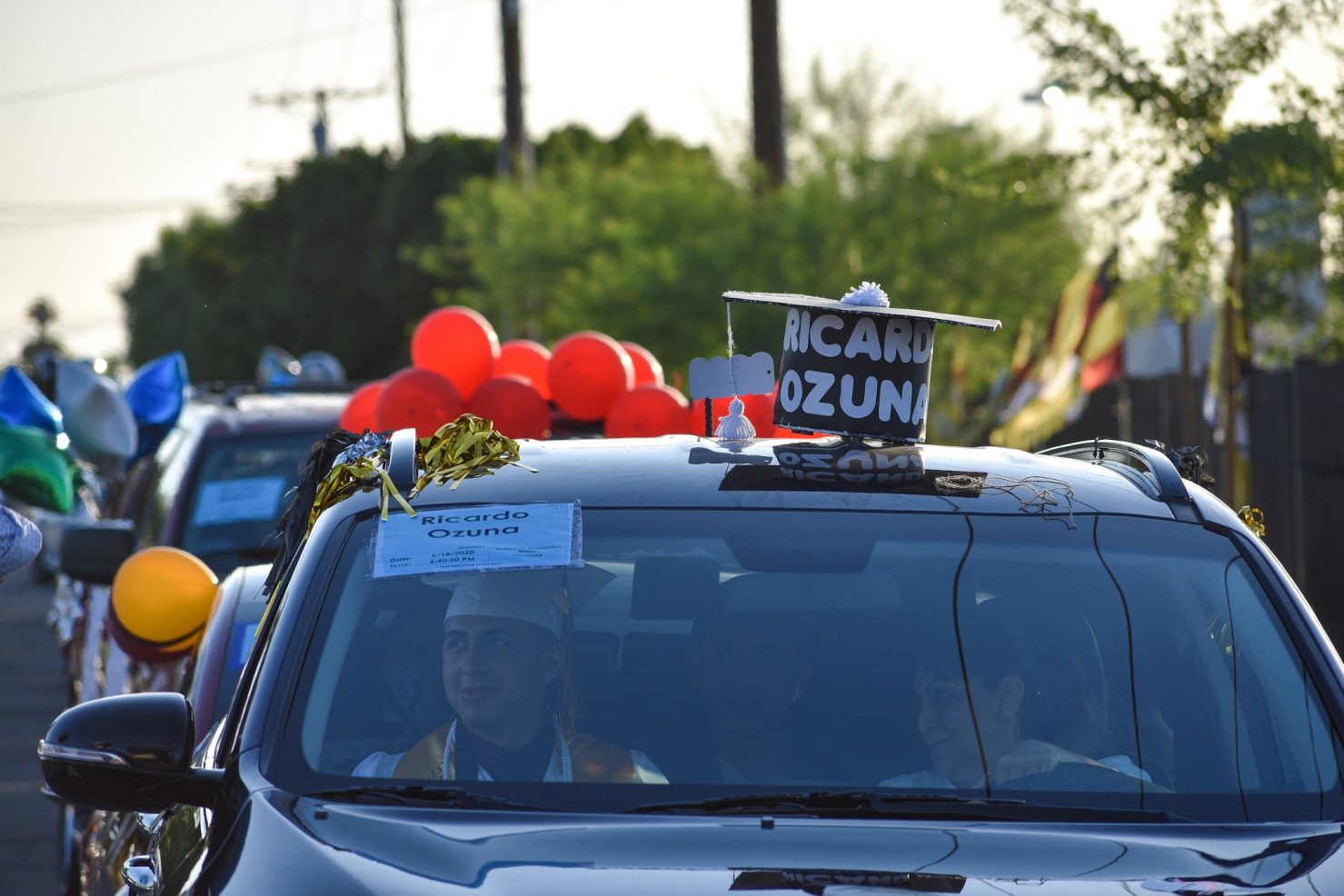 No. 1-ranked graduate of the Calexico High School class of 2020, Ricardo Ozuna (left), sits in the passenger side of his mother’s car awaiting his chance to receive his diploma June 18 during drive-through commencement ceremonies in the parking lot of Ward Field. CORISSA IBARRA PHOTO
Home
COVID-19
In COVID-19Local News

Instead of applause from a crowd, Calexico High School’s class of 2020 — the first half of it — was welcomed and celebrated by an unending symphony of vehicle horns sounded by proud parents during part two of the senior class’ commencement ceremony June 18 in the parking lot of Ward Field.

“I feel excited we are finally bringing some type of closure for our students in a celebratory way, and I hope they enjoy it. I hope they get that sense of ‘I walked on the stage, my parents saw me, I got the congratulations from the staff; my parents and teachers saw me walk on the stage,’” Calexico High School Principal Gabrielle Williams-Ballesteros said moments before the ceremony began.

The two-part commencement started June 11, with a two-and-a-half-hour virtual version of the ceremony featuring pre-recorded student speeches and musical performances hosted by Williams-Ballesteros. The video ended with 692 seniors’ photos shown and their names read by Calexico High staff along with a 20-minute photo montage of members of the senior class.

The class of 2020 was “officially” conferred as graduates by Calexico Unified Superintendent Carlos Gonzales and school board President Richard Romero during the video presentation.

(To read about the June 11 virtual graduation, click here.)

Fast-forward to June 18, the live part of the two-part event, where the first half of those students who qualified to graduate, 688 of them, and their parents drove into the parking lot of Ward Field to walk a stage, pick up their diplomas and get their photos taken, all decked out in their traditional garnet and white caps and gowns.

“I’m pretty excited about graduating; well, it’s whatever, actually. The virtual graduation was all right. It was not the best. I’m not going to get emotional because it’s not going to be the same,” graduate Ethan Aldaz said, trying to play it cool while he waited with his mother in their car on Andrade Avenue before the ceremony.

“Of course, I am going get emotional. We have to recognize them for their success and none of this changes the way I feel about my son, and I proud I am of him,” said Betty Aldaz, with tears already welling up in her eyes.

Calexico High administrators painstakingly planned out every aspect of the ceremony to give their students closure for their hard work while keeping them safe and socially distanced, the fifth-year Bulldog principal said.

“There are some silver linings to having the ceremony this way. The kids are in the cars in the A/C. Everybody looks forward to graduations, but the heat is always a big concern at graduation,” said the ever-optimistic Williams-Ballesteros.

Because of the size of the graduating class, the drive-through commencement was split into two nights. June 18 saw the top-20 seniors based on their grade-point averages receive their diplomas first, followed by the Associated Student Body government officers. Then, students A through K lined up on Andrade Avenue in their cars at predetermined 15-minute increments so organizers could further alphabetize the graduates.

Students with last names starting with L through Z were to receive their diplomas the same way the evening of June 19.

After Aldaz and his mother drove closer to the Ward Field lot and the graduation stage came into view, he became more excited.

“It’s a little emotional. I am thinking about what I am going to do afterward in life and later tonight. We are going to get carry-out at Applebee’s and celebrate at home with family,” Aldaz said as he and his mother inched along in their car.

After they parked and Aldaz got his diploma, he reflected on the experience.

“It was all right. It wasn’t the best up there. Maybe it would have been a little different with a huge crowd and fireworks. I feel like I got a little closure from this, and I am ready for the next stage in life,” Aldaz said.

By this point, his mother was so overwhelmed with emotion and overflowing with tears that all she could do was smile with pride for her son.

Although graduation is a normally a happy time in a senior’s life, the reality is this year has been anything but joyous for many students and their families.

For some, it’s been as minor as losing out on their senior year of dances, gatherings and saying their last in-person goodbyes to long-time friends and acquaintances.

For others, though, it’s been much worse. For some, it’s been a time of loss and suffering, and it was reflected in some of their interviews with this newspaper June 18.

“I feel excited but kind of disappointed, because my grandfather passed away from COVID 10 days ago, and he is not going to be here with me,” said graduate Jose Abundais III, while waiting in the car line with his father moments before receiving his diploma.

“I feel very sad about my father, and I hope everybody believes (in COVID-19) and they take care of themselves and their families. It touched me and my family, and I work in the medical field,” said Jose Abundais II, who had gotten off work to attend the event with his son. The father was still wearing his work scrubs.

Abundais III said he plans to attend Imperial Valley College in the fall in hopes of becoming a medical assistant so he can help in solving the problems his community is facing from COVID.

Abundais III was not the only graduate in line to receive their diploma who had recently dealt with a death in the family.

Graduate Andres De La Rosa was also mourning a grandparent, the loss of his senior year and the effect of COVID on his young life.

“I feel nervous about all of this. I am graduating, probably going to college and am an adult. Even though this is not the normal graduation ceremony, that does not change the way I feel at all,” De La Rosa said as he waited in line with his mother in their vehicle.

“How do you think I feel? This is my last son. It is kind of weird because he didn’t get to go to Disneyland and all that. He did not want to come tonight,” said Andres’ mother, Brenda De La Rosa, before explaining how hard this year was for her son.

“Earlier this year my mother got sick with cancer. We moved from Calexico to Mexicali to help her until she passed away. Then we found out someone living in our apartment complex in Calexico died from COVID and we still have not been able to come (home),” she said.

With a limit to the number of people piled into each car, some parents watched from the street near Ward Field, like Elizabeth Sais.

“I am proud of my son, Alberto Acuna Jr. He is leaving July 14 to the Air Force. OMG, it’s big. I am proud and very excited. The feeling is tremendous. We were used to the old-fashioned graduation. I graduated at Calexico. It changed a little bit, but change is good and it’s OK,” Sais said.

Hopefully, the change is temporary and next year things are back to normal, whatever that might look like. At least that’s the hope of incoming senior and Class of 2021 President Jacob Noriega, who watched the graduation ceremony as a guest of his father, Calexico High Dean of Students Frank Noriega.

“This is something new. It’s emotional and super interesting to watch the cars. It’s cool to be here and be able to see them. Even if it is far away, it’s still pretty cool and I can’t wait for next year when it’s my turn,” Jacob said.

For graduate Andres Real, he was still thinking about how difficult of a year this has been for himself and the class of 2020.

“With all these things going on in my life, it was hard to do all that I needed to graduate. It was very difficult,” explained Real, who said he felt validated for the work he did to earn a high school diploma. He said he planned to celebrate at home with family after the ceremony.

As he reached the front of the graduation car line, Real tightened up a bit.

“Man, I’m feeling more nervous than before. This is the last time I will get to see my friends.” 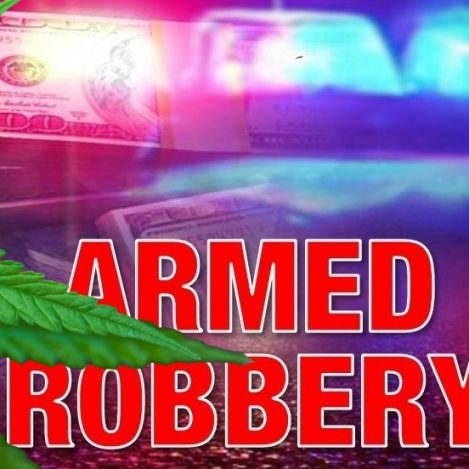 No Arrests in Imperial Pot Heist Attempt, Owner is Suspicious