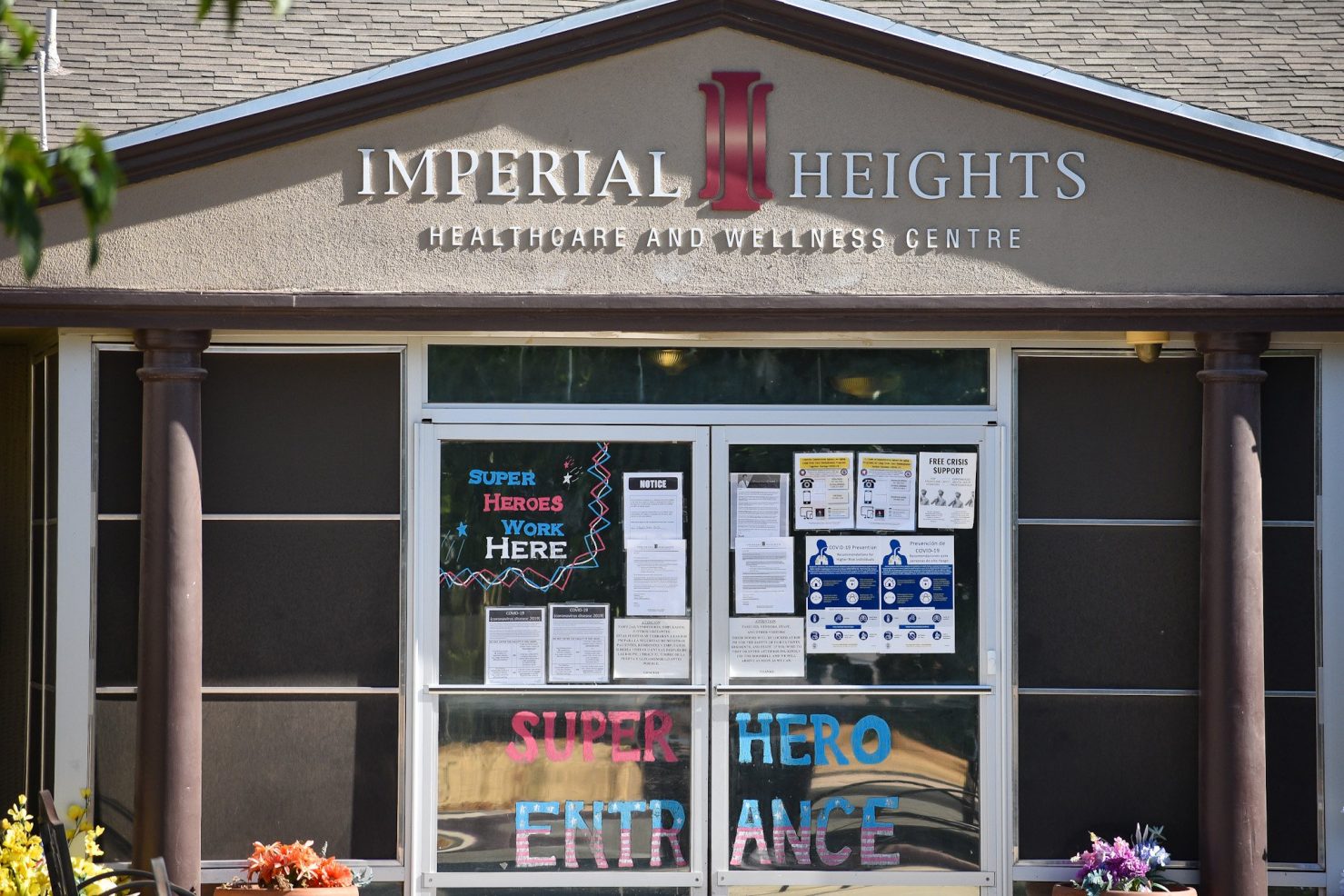 The entrance to Imperial Heights Healthcare and Wellness Centre, 320 Cattle Call Drive in Brawley, is shown June 19. The skilled-nursing facility was the site of a 19-patient COVID outbreak that started June 14. CORISSA IBARRA PHOTO
Home
COVID-19
In COVID-19Regional News

A COVID outbreak inside Brawley’s Imperial Heights Healthcare and Wellness Centre reported among residents there late last week appears to be just a fraction of the cluster of coronavirus cases tied to Imperial County skilled-nursing facilities as of June 22, according to county Public Health Department officials.

Some 19 residents, including four patients who have been hospitalized outside of Imperial County for more specialized treatment, were identified during an interview with Imperial Heights’ medical director, Dr. George Fareed, on June 19.

However, in clarifying the spread of COVID-19 among skilled-nursing facilities in Imperial County, Public Health Department epidemiologist Paula Kriner during a telephonic weekly press conference June 22 painted a picture of a much more widespread problem among the facilities and other “vulnerable populations,” including jail inmates and staff.

County Public Health counts 16 COVID-positive residents inside Imperial Heights as of June 22; one more than Fareed said was in isolation and undergoing treatment (15), as of June 21. That number is strictly for those still in the nursing home and does not account for those who have been hospitalized locally or transferred out of county.

There are 12 residents with COVID-19 in Valley Convalescent Center in El Centro as of June 22, Kriner said, and no residents have been infected at Imperial Manor in Imperial.

However, the number of staff members of those facilities appears to be where the concentration of novel coronavirus infections is being recorded.

In all, some 32 nursing home residents have fallen ill with COVID and 57 staff members are infected, according to the county and Fareed’s numbers.

As far as the number of COVID infections of other “vulnerable populations” monitored by county Public Health, Kriner said there are currently 28 inmates in the Imperial County jail with COVID, 11 corrections staff that have tested positive, and another 11 staff members who assist with corrections.

As of June 22, it wasn’t clear if any deaths had been attributed to any of the current outbreak. However, a family member of a COVID-positive resident of Imperial Heights told the Calexico Chronicle that their uncle had died June 12 from the virus in a Los Angeles-area skilled-nursing facility.

Family and Fareed said the man had been living at the facility for two to three years, and had come up positive for the virus around May 24, when Fareed said he personally had the man admitted to Pioneers Memorial Hospital in Brawley. A day later, Fareed said the man was discharged and transferred to a skilled-nursing facility in Los Angeles County that could better manage his condition. He never returned to the Valley.

Family members told the Chronicle their uncle died June 12. But there seemed to be some dispute over when he came down with the virus and when he was sent to Pioneers.

Also, family members were concerned how their uncle would have contracted the virus. Fareed said the man was briefly sharing a room with a hospice patient being treated by an outside hospice staffer who possibly could have brought in the virus to the facility.

During repeated conversations with Fareed between June 19 and June 22, Fareed said it was starting to become more likely that the outbreak of COVID at Imperial Heights began with the May 24 positive test of the man who died June 12.

Initially, Fareed was referring to a “patient zero” who tested positive for COVID on June 14 as being the start of the outbreak that “spread like wildfire” in the nursing facility at 320 Cattle Call Drive.

Fareed said there were 61 patients in the 80- to 90-bed facility as of June 19, leaving the facility with plenty of room to isolate patients. During a subsequent interview June 22, Fareed said two of the four patients transferred out of the Valley were in San Diego-area hospitals, one was in Sacramento and one was in San Francisco.

Fareed said it was unclear how the virus made its way into the facility. Imperial Heights has been “extraordinarily vigilant to protect residents with screenings and limitations of visitors, keeping residents inside,” Fareed added. What’s more, he said staff is regularly monitored and screened as they come in.

After “patient zero” tested positive for the virus following his hospitalization, the other residents and staff members were tested last week en masse, the doctor said.

Meanwhile, Fareed said the Imperial County Public Health Department “dropped the ball” and somehow allowed its weekly testing program with Imperial Heights to lapse for what was basically a two-week window. He said the last time the Public Health Department was to test, “patient zero” came back with a negative swab result from a June 1 test. He should have been tested again the next week but was not, Fareed said.

The doctor said the lapse occurred sometime between June 8 and June 12.

However, on June 22 Munday refuted Fareed’s claims, explaining that it was never the county’s responsibility to establish a testing program with Imperial Heights and that that was the job of the facility itself, which is under the direction of the state Public Health Department.

Still, Munday said the county was providing Imperial Heights — and other skilled-nursing facilities around the county — with the materials to carry out tests. He said if those samples or specimens did not make it to the county Public Health Department’s laboratory to be processed, than that was a failing on the part of Imperial Heights, not the county.

Jeff Lamoure, deputy director for environmental health for the Public Health Department, is in charge of testing in the county related to COVID.

Lamoure also clarified that the state requires a testing “mitigation plan” be in place for skilled-nursing facilities and that fact was communicated to Imperial Heights staff earlier in the day June 23. Among those plans was that alternatives for testing be in place, but that the county Public Health Department was there to assist.

Fareed did not want to get into a tit for tat over the testing issue, but an issue not all that different from Fareed’s initial assertions against Public Health reared its head June 22 and June 23, after Munday’s press conference.

According to both Fareed and a concerned family member of an Imperial Heights patient who would not give her name, testing materials were set aside for Imperial Heights to be swabbed and tested on June 22, but then those materials, or at least the reactive agents needed to process the swabs/specimens, “were allocated elsewhere” June 23, Fareed said Imperial Heights’ director or nursing told him.

Nursing staff at the home told the unidentified family member the same thing.

Although Fareed said an agreement was put in place with Pioneers Memorial Hospital to get the swabs tested, Lamoure said by the afternoon of June 23 that 16 to 18 specimens from Imperial Heights were being processed, saying there had been some “misunderstanding” earlier in the day.

Fareed said Munday himself contacted Imperial Heights to say don’t take the specimens to Pioneers, but bring them to public health’s lab.

Meanwhile, Fareed said the 15 patients in isolation at Imperial Heights were undergoing a treatment regimen of zinc, doxycycline, and hydroxychloroquine, the anti-malarial drug recently revoked of its “emergency use authorization” by the U.S. Food and Drug Administration.

Fareed said June 19 the treatment is still recognized by most physicians as an effective treatment and called the FDA’s recent decision “scare tactics.”

Fareed added that at least one patient was also being treated with dexamethasone, a potent corticosteroid “used at the earliest signs of any breathing difficulties.”

Munday, unsolicited, did address Fareed’s use of hydroxychloroquine during the June 22 press conference, implying the use of that treatment could open Fareed to issues with the state medical board.

“The reason that it was revoked is because the studies that were ongoing did not show evidence of benefits, the drug was not efficacious and there are substantial issues with side effects. I would note that physicians are free to use drugs that have been approved by the FDA for other indications, for additional purposes that they choose to do so,” Munday said.

“However, I would also note that, particularly in this case, when actual data were reviewed that led to this being revoked, that this would not be considered the Community Standard of Care and could be something that would be looked at by the medical board should any adverse consequences occur from side effects or other issues in the patients that are being treated with these drugs. So, it’s just important to keep that in mind,” the health officer added.

Munday’s statements about hydroxychloroquine did stir up Fareed a bit June 23. Fareed maintained both the safety and efficacy of the course of treatment for COVID-19-positive patients, despite what the FDA has said.

Fareed referred to story in Galveston County, Texas, in which one-third of the population of a nursing home there came down with COVID. The attending physician, Dr. Robin Armstrong, treated 39 patients with the medication, and “all the patients have done well,” with no side effects. Although Fareed did not say so, the interviews with Armstrong in the story implied the issue with hydroxychloroquine might be as much about politics as it is about health.

In recent weeks, during similar telephonic press conferences for the media, Munday has indicated both testing and COVID cases at skilled-nursing facilities in the county have picked up.

That appears to be in contrast to what was witnessed early on in COVID cases throughout the rest of the nation, where skilled-nursing facilities saw some of the earliest mass outbreaks. Most notably was an outbreak at Life Care Center in Kirkland, Wash., in February and March, where two-thirds of the nursing home’s 108 patients fell ill, as did 47 of its workers. Some 35 people died in that outbreak.

The virus has also caused havoc at almost 50 Texas nursing homes, with facilities in Dallas, Fort Worth, El Paso, Houston and other cities reporting more than a dozen confirmed cases or deaths. An El Paso nursing home reported the highest number of confirmed cases in Texas as of May 31: Ninety-one residents ill out of 125, plus two deaths. And an Austin facility reported a record number of deaths: 22 residents, plus 81 confirmed cases. This, according to The Dallas Morning News.

Munday theorized June 22 why he thinks Imperial County is seeing the clusters now in the nursing homes.

“In general, I think it has to do with the fact that early on in the outbreak that there was not widespread testing available, and so all the testing was focused only on the high-risk populations and people that were getting sick. And obviously, as I think we all know by now, that the nursing facilities have the highest-risk patients. So, I think, since we entered into the outbreak of the epidemic later than other jurisdictions, and we learned from what those jurisdictions went through,” Munday said.

“I really think it’s just has to do with the availability and the timing of the testing as much as anything else,” he added.

The Calexico Chronicle sought additional comment from the directors of Imperial Heights on June 19, but no one from the Brawley facility would speak with a reporter or identify themselves. Questions to the corporate owners of Imperial Heights, Rockport Healthcare Services of Los Angeles, also went unanswered. In fact, someone who picked up the phone for Rockport would not identify herself and hung up the phone after asking “are you a reporter?”

A message with Valley Convalescent Center on June 19 was never returned.

More details are not known about the nursing facility clusters, likely due to Munday and the county Public Health Department’s ongoing policies of not revealing specific information that might violate privacy issues.

County Public Health does not address much about COVID-related deaths, so it wasn’t known how many deaths could be attributed to the nursing homes.

As of 11:10 a.m. June 24, Imperial County had 70 COVID-related deaths. Of those 70, some 44 fatalities were age 70 or older, the typical ages of those living in skilled-nursing facilities. 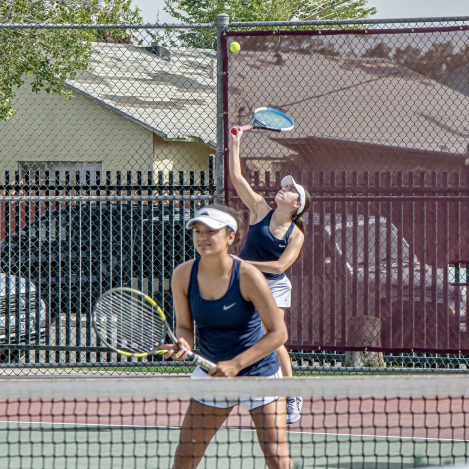