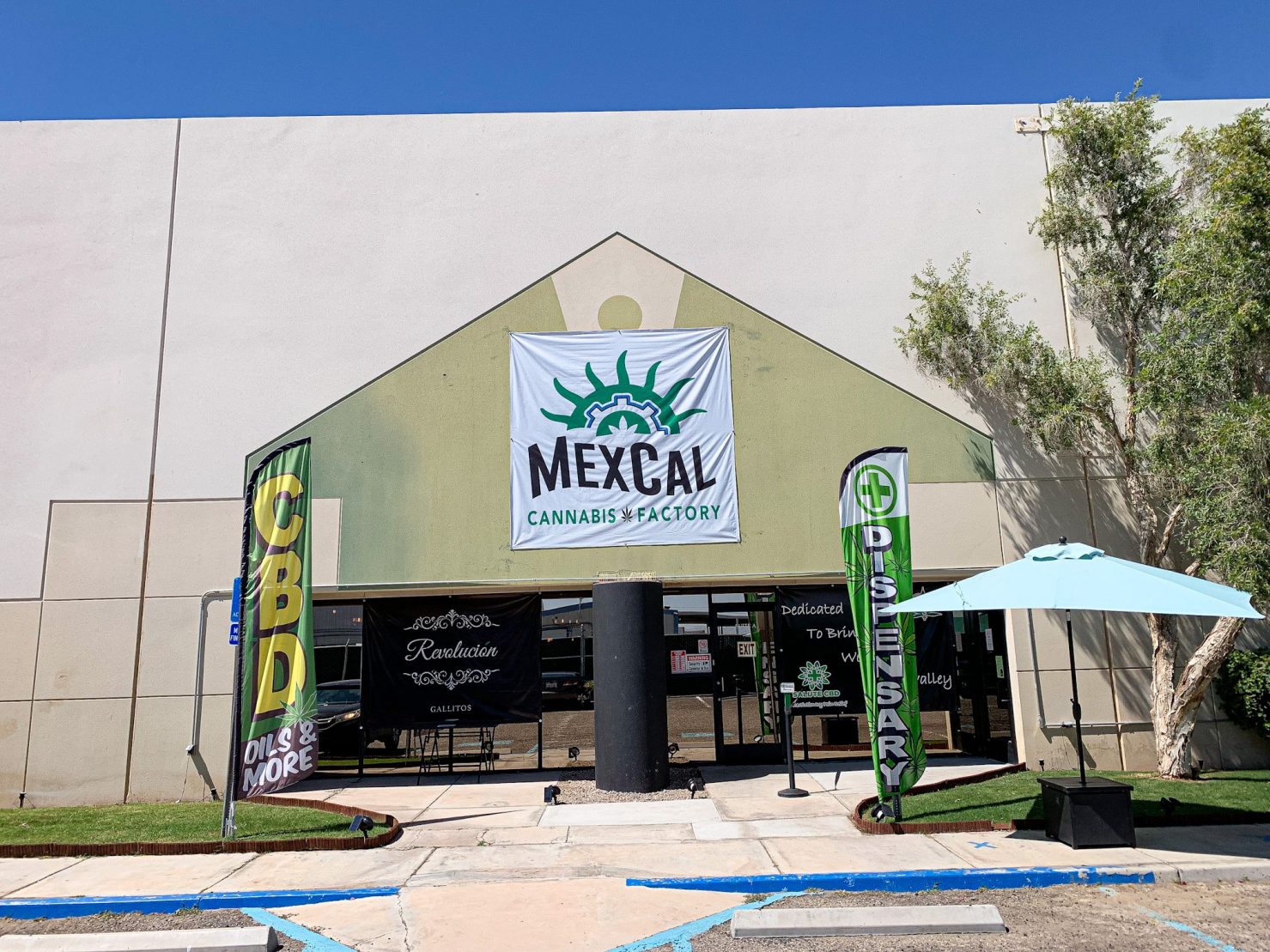 The outside of MexCal Cannabis Factory is shown in the Cannabis Overlay Zone in Calexico on May 4. The Calexico City Council on June 17 hired HdL Companies of Brea to not only administer background and other checks and audits on cannabis-related activities in Calexico in the future, but the firm will also investigate past permitting processes and look into existing permits and businesses like that of MexCal Factory. CORISSA IBARRA FILE PHOTO
Home
Featured Stories
In Featured StoriesLocal News

Winnowed from an initial list of 15 applicants, the remaining four members of the council on June 17 appointed one of three final candidates, Camilo Garcia, to fill Romero’s seat, which was made vacant by his June 8 resignation.

Garcia, a program and compliance manager with the Imperial County Workforce and Economic Development Office, ran for Calexico City Council in November 2018, where he finished near the bottom of a crowded field that saw both Romero and Council Member Rosie Fernandez elected to office.

“I was a political newcomer then, but I’m not a newcomer anymore in community involvement,” said Garcia, who serves on the Calexico Economic Development and Financial Advisory Commission.

Excited to be serving, Garcia said he hopes to put his economic development experience to good use and help create jobs in Calexico.

“Workforce development is my background … We have high unemployment historically … I’d like to help with that. It can be done, little by little,” Garcia said.

He understands his term is only for six months and issues like job creation take more time than his short-term appointment will allow, so that’s why Garcia is already making plans to run for the two-year seat in November that will round out Romero’s vacancy.

“I know the community is there for me … I’m here to work for them as a public servant,” Garcia said.

The four remaining City Council members were given the choice between Garcia and Stella Jimenez, district director for Assembly Member Eduardo Garcia, D-Coachella.

Initially, the council was presented with a third candidate, Orlando Espino, a former member of the Calexico Police Advisory Commission. However, Espino contacted city officials about 45 minutes before the meeting to withdraw his name from consideration.

“Other opportunities came up in the horizon and after a talk with my wife, we decided to focus on those instead,” Espino told the Calexico Chronicle through Facebook Messenger the evening of June 17.

In a related matter, the council approved a professional services agreement with HdL Companies of Brea, which on the surface appeared to be an agreement for the future management of cannabis-related services according to the agenda report prepared by City Attorney Carlos Campos.

However, Calexico Manager David Dale said during an interview June 16 that HdL Companies would also be used to investigate and audit existing cannabis permits and the city’s cannabis-management processes up to now.

Romero and co-conspirator and former political appointee Bruno Suarez-Soto pleaded guilty June 11 to taking some $35,000 in bribes from an undercover FBI agent who posed as an investor who wanted to fast-track a cannabis permit.

He said the city has started that process to some degree, but that it’s HdL Companies that would be used to look into the city’s cannabis program on a much deeper level.

“It’s our goal that HdL review all permits and processes existing and current,” Dale said.

Meanwhile, Dale revealed June 16 that the city already turned over all requested cannabis-related paperwork, documents, permit applications and emails requested by the FBI in a public records filing from February or March, before the city knew Romero and Suarez were being investigated.

“We didn’t realize why they (FBI) had asked for it at the time,” he said.

Regarding the appointment, a committee comprised of council members Bill Hodge and Morris Reisen, Police Chief Gonzalo Gerardo, Finance Director Karla Lobatos and Dale met the afternoon of June 15 to go through the 15 applications for Romero’s seat.

Dale said each member of the committee reduced the list to their top-three, and within an hour agreed to present the council with Espino, Garcia and Jimenez.

Initially, council member Lewis Pacheco wanted to table choosing Romero’s replacement, asking the rest of the council to delay a decision so they could interview candidates face to face, especially in light of Espino’s withdrawal.

However, Hodge, Reisen and Fernandez wanted to move forward.

“If someone bows out, that’s the chance you take when you’re scrutinized for council,” Reisen said.

The council then unanimously voted for Garcia, after a motion to appoint Jimenez died for lack of a second.

“We’re going to welcome him, and he’s a real team player,” Hodge said of Garcia.

Although it was not expressly mentioned, it is likely Garcia will be sworn in at the July 1 regular meeting of the council, where a rotation of council members will take place.

That night, Fernandez is expected to take over as mayor and Reisen as mayor pro tem.

Meanwhile, Calexico residents will be asked to elect four members to the Calexico council in the Nov. 3 general election. Three full-term, four-year seats are up for election (Hodge, Reisen and Pacheco all intend to run for re-election) and Romero’s short-term, two-year seat (which Garcia has already said he will seek to fill permanently).

Dale said state law requires Romero’s seat go to the electorate because he served less than 50 percent of his four-year term.

As far as the contract with HdL Companies, the council voted unanimously to hire the firm, including an amendment to the vote indicating HdL would be investigating existing permits and performing checks on cannabis businesses already open and operating in the city.

When Dale told the council of his intentions to use HdL to both perform future services and look back over existing practices and permits issued, the council members and others were in total agreement.

Hodge said, “It makes sense to me,” and Pacheco added, “the public is entitled to this.”

Chief Gerardo also supported the idea, since the city’s move toward establishing cannabis as an industry in Calexico was largely developed before he became chief.

“I totally agree with it. Us going back is probably the best thing to do,” Gerardo said. “If we go back, it’s also going to make us more transparent. It helps the Police Department and it helps the city.”

HdL will provide a number of services to the city regarding the management of its cannabis program, including background checks for initial applications and renewals, pre-licensing site visits and inspections, regulatory compliance inspections, cannabis tax audits for the city, and additional “subject matter expertise and technical assistance,” according to a report prepared for the council by Campos.

Calexico already has a separate contract with HdL Companies for auditing services and has worked with the firm since 1992, according to Campos’ report.

HdL Companies has worked with local governments in California on economic data analysis on sales, use and transaction taxes, property taxes, transient occupancy taxes, and cannabis management, Campos writes in his report. The services of HDL Companies are utilized by more than 500 agencies in six states.

Costs tied to the HdL contract would primarily be folded into fees charged to prospective businesses and individuals seeking cannabis permits, increasing costs by $8,500 a year. “Any additional one-time costs for subject matter expertise and technical assistance will be covered by the general fund,” Campos’ report states.

Dale said the costs of HdL looking into existing permit holders and businesses would be paid for by the permit holders, although that wasn’t fully explained during the meeting.

There was a third loosely related decision that went before the council June 17 that had to do with the awarding of a cannabis regulatory permit for a “microbusiness facility” in the Cannabis Overlay Zone.

The permit initially went before the Calexico Planning Commission on May 26 but failed to get enough votes to pass when commissioners Henry Zamarripa and Frank Zarape voted for the permit, Mary Salazar voted no, Michael Mayne abstained and Leticia Cota was absent.

Legal counsel for the applicant appealed the Planning Commission’s non-approval to the City Council within the statutory 10 days.

Under the microbusiness permit, Calexico Holistic Care Growth Corp. wants to cultivate cannabis in an area fewer than 10,000 square feet, assume “Level 1” manufacturing, which in this case is “extraction” of distillates from the cannabis grown on site, and distribute its products outside city limits from an address at 2403 Van De Graaf Ave.

Another business, Elemental Holistic Care Corp., which is owned by the same La Mirada individuals under a slightly different name, is in the process of opening a retail location in the same building at the same address, according to contract planner Christopher Velasco’s report to the council. “This other use has a separate entrance in compliance with Bureau of Cannabis Control regulations. Up to two cannabis permits may be issued for the same address,” Velasco writes in his report.

Velasco said the company is doing tenant improvements at the site. 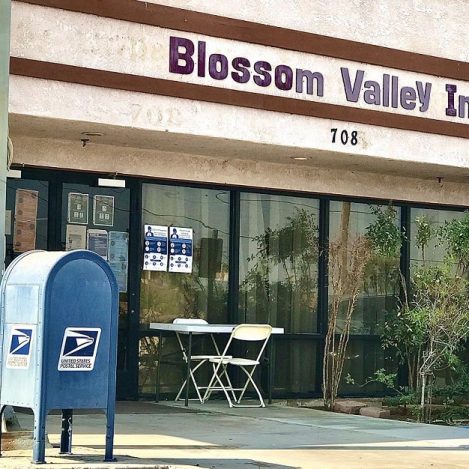