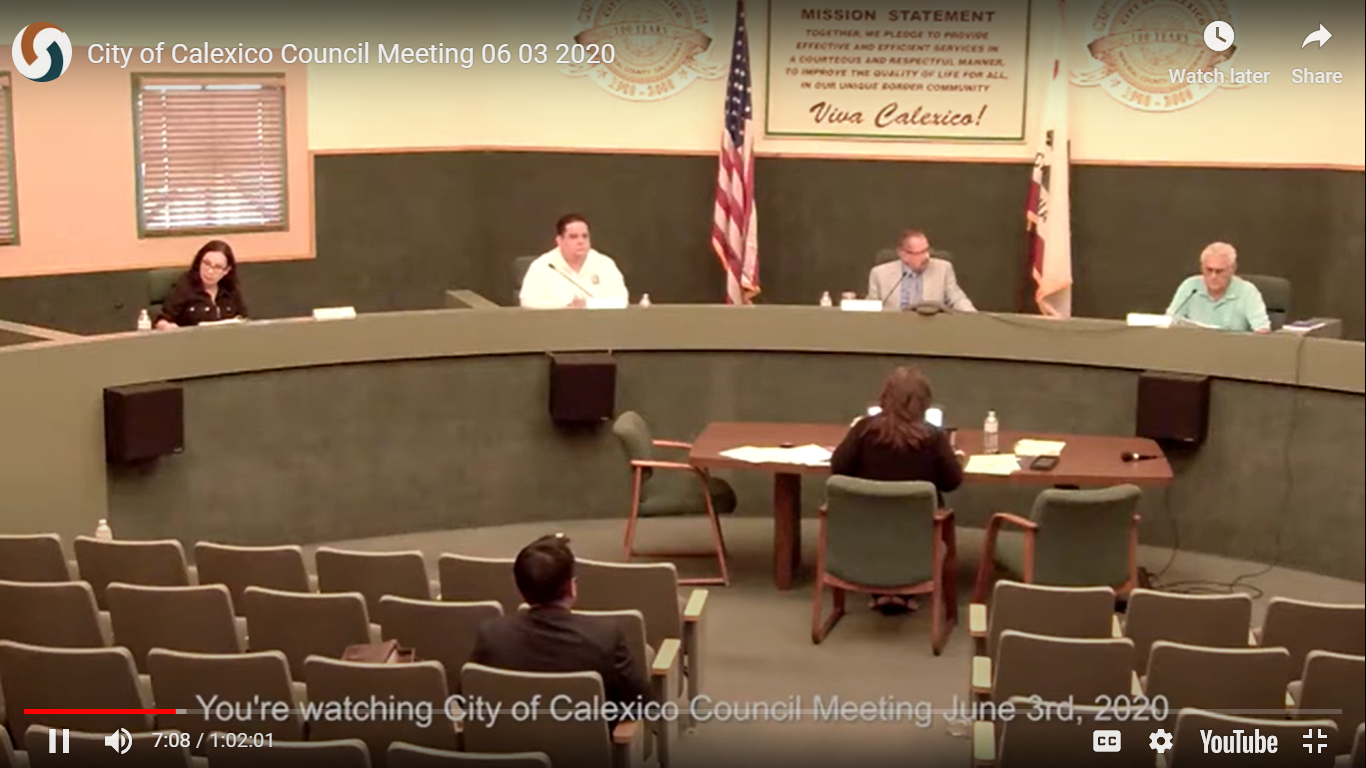 Mayor Pro Tem David Romero (second from left) is shown next to Calexico Mayor Bill Hodge (third from left) during the June 3 Calexico City Council meeting in which Hodge would make a statement regarding the criminal allegations against Romero. ONLINE SCREEN CAPTURE
Home
Local News
In Local NewsRegional News

(UPDATE 4:30 p.m. June 9: Calexico City Council decided how it will fill David Romero’s vacated seat on the council during a special meeting held the afternoon of June 9.)

Amid much pressure from the mayor and members of the public, embattled Calexico Mayor Pro Tem David Romero has resigned from his position on the City Council, a fellow council member confirmed June 8.

Calexico City Council Member Morris Reisen told this newspaper that Romero had emailed City Manager David Dale around 10 a.m. to inform Dale and the council he was resigning.

“Upon everything that has unfolded in the last two
weeks, I strongly believe this is the wisest and most effective decision for the benefit of our city and its
citizens …” Romero stated in the city’s press release.

To read Romero’s resignation letter in its entirety, download here:Download

Reisen said he thinks it was the pressure applied by both Calexico Mayor Bill Hodge and Hermosillo’s online petition that forced Romero to finally resign.

Hermosillo’s Change.org petition calling for Romero to step down has collected more than 600 online signatures as of June 8, just five days after he posted it, according to the website and petition posted.

Its creation comes one day after a June 3 Calexico City Council meeting in which Romero sat silently next to Calexico Mayor Bill Hodge, who used the council member comments portion of the meeting to, once again, publicly chastise Romero for the allegations.

Romero and a former city commissioner, Bruno Suarez Soto, were arraigned and pleaded not guilty May 21 to allegations they solicited $35,000 in bribes from an undercover federal agent in exchange for fast-tracking a non-existent city permit for a retail cannabis dispensary.

For the second time since the news broke of the allegations against Romero and Suarez, who was a former political appointee of the mayor pro tem, Romero spoke to this newspaper.

“As we all know, Mayor Hodge gave a statement in regards to the allegations that were given to me, and I understand that it’s his duty and obligation as mayor to try and protect the reputation of our city and its citizens, and with that being said, I hold no ill will or remorse against Mayor Hodge and his statement or anyone who has spoken in a negative matter about me,” Romero stated to the Calexico Chronicle on the afternoon of June 5 through a text message.

“I can only hope that with due time, these allegations are not what represent me but instead all the positive actions I have done in city hall and in our amazing community of Calexico, which I dearly love. Thank you for your time,” Romero stated.

Romero was asked whether he had any intentions to resign from office, but he did not answer to that question, only responding to Hodge.

Romero was again contacted June 8 to comment on his resignation, but he did not immediately respond.

While Hodge did not call for Romero’s resignation June 3, he previously told the Calexico Chronicle in a May 24 article that the accused council member should resign from office for the good of the community.

“I’m saddened and especially disappointed in this young man (Romero) … I hope that he resigns. It would be best for him and the City Council,” the mayor told this newspaper May 24.

Meanwhile, Reisen said June 8 that while Romero was a friend, his resignation was a good thing for the city.

“We get rid of some of that black eye,” Reisen explained. “We all had an inclination he was doing something like that (illegal activity), but we had no proof.”

“I can’t speak for everybody, but the people I have interacted with today (June 8), we are relieved” Romero has resigned, Hodge said later in the day.

“Now we can take a deep breath and cleanly move forward with our city business,” the mayor added. “His resigning is good for the city and good for him.”

City Council Member Lewis Pacheco said June 8 that many people in the city were under the assumption the council could remove Romero, but because he was elected, the only options were a recall election or Romero’s resignation.

Council member Rosie Fernandez had no comment on Romero’s resignation.

Romero was due to take over as mayor in July in the normal rotation of members, but Reisen said it had already been agreed upon that Romero would be passed over when the time came.

In July, he said, Fernandez will become mayor and Reisen will be selected mayor pro tem, if the support is there from the rest of the council.

“There was no way we were going to let him (Romero) represent us in Sacramento, or anywhere else,” Reisen said.

Fernandez did say she was scheduled to be Romero’s mayor pro tem in the normal rotation. While she would not comment specifically about becoming mayor in July, she did offer her assessment of the working relationship among the council.

“We are going to stick together and move forward. Things look good, the budget looks good, and I’m working with wonderful men on that council,” Fernandez said June 8. “We’re working as a team.”

“I would like to thank everyone who signed the petition for Mr. Romero’s resignation, and having our city’s best interest. I would also like to thank Mr. Romero for listening to the community and resigning,” Hermosillo stated June 8.

As for Romero’s seat, Reisen said two and half years remain on Romero’s term. He said the council would likely appoint someone from the community rather than hold a special election or wait for the November election.

It appears a combination of the two will be the case.

During a special meeting of the council the afternoon of June 9, the four remaining council members directed City Manager Dale to immediately advertise to solicit applications for potential council appointees, due to City Hall by 5 p.m. June 12.

Dale said the council is looking to do a short-term, six-month appointment to made during an upcoming regular council meeting. An announcement on the city’s Facebook page says the council has until Aug. 7 to fill the vacancy.

A committee comprised of Hodge, Reisen, Dale, Police Chief Gonzalo Gerardo and Finance Director Karla Lobatos will winnow the applicants to a short list of three candidates, who will appear before the council June 17, Dale said.

In what might prove to be a record-setting event, Dale said the short-term seat will expire in December, as the citizens of Calexico will be asked to elect four members to the Calexico council in the Nov. 3 general election. Three full-term, four-year seats are up for election, and Romero’s short-term, two-year seat will be made available.

Of course, Reisen was speaking for himself June 8, but he said with three seats up for grabs in the November general election (Hodge, Reisen and Pacheco’s seats are all available), a fourth seat in the election would be too many.

Hodge has already said he intends to run again, and both Reisen and Pacheco went on the record June 8 saying they intend to run for re-election.

Prior to Hodge’s June 3 denouncement, a lone public comment submitted through email also called for Romero’s resignation or removal from office by the council. The city has said Romero cannot simply be removed unless he is convicted of a crime.

Previously, in the May 24 article, Romero did not say whether he would resign.

With the exception of the May 21 special meeting of the council that was scheduled at nearly the same moment as his arraignment, Romero has attended the only two meetings held since then, a May 28 special meeting on the budget and the June 3 regularly scheduled meeting.

The June 3 meeting kicked off with a scathing letter against Romero from Calexico resident Jose Ortiz.

“This is a question to the City Council, or the four of you that haven’t been implicated in an FBI sting and charged with public corruption by the U.S. Attorney. Why are you not taking action to remove councilman David Romero for his dishonor he has brought to your council, to this community?”

Ortiz then jumped to another topic, before returning to Romero. Ortiz’s left turn was not entirely unrelated, as it was an apparent reference to cannabis-related decisions that reside with the planning commission.

“What is happening to the city’s planning commission, which is now operating under a cloud, and with its chairman Michael Mayne, who is also a real estate broker and developer?” Ortiz stated.

“The presumption of innocence that Romero is entitled to shouldn’t be the standard you apply to your own council meetings,” Ortiz stated. “If you say nothing, you’re in agreement. If you do nothing, you’re complicit.”

None of the members of the council immediately responded until Hodge’s turn came.

“As a mayor, I have a heavy heart in making this statement. I derive no satisfaction in having to read this statement pertaining to Mayor Pro Tem David Romero,” he said before proceeding, saying the comments were solely his own and not that of his fellow council members or the city.

(Editor’s note: This statement was edited for length and it can be heard in its entirety during the council comments portion of the agenda here.)

“The city of Calexico strongly condemns these egregious allegations … Calexico will not tolerate of soft pedal this alleged criminal behavior. We are a city government of transparency and integrity. Although we must remember one is presumed innocent until proven guilty, Mr. Romero and Mr. Suarez have the constitutional right to have their day in court and they will, our city government will move forward in a positive direction,” Hodge said.

“As a mayor, I will not allow people to generalize or tarnish the whole city and its government; city employees and city hall are ethical and hardworking employees. They are good people, and to generalize that our city government is corrupt is dead wrong,” he continued.

“Besides, this is not an ‘Only in Calexico’ problem. No, other cities have had their share of unfavorable issues. I would not allow a couple of, alleged quote-unquote, bad apples to ruin the good this city government has done, especially in the last four years,” Hodge said, alluding to the financial recovery and strides the city had made to return to solvency.

“Yes, we still have room for improvement. But we stand strong and resolute with other cities in weeding out and combatting corruption and criminality,” Hodge explained. “The new image and reputation you must accept is, overall, Calexico as being a city of goodwill and decency. Calexico stands tall and will not accept anything less.”

No other members of the council said anything, and the June 3 meeting resumed.

The full federal indictment against Romero and Suarez can be read here:Download
- ADVERTISEMENT - 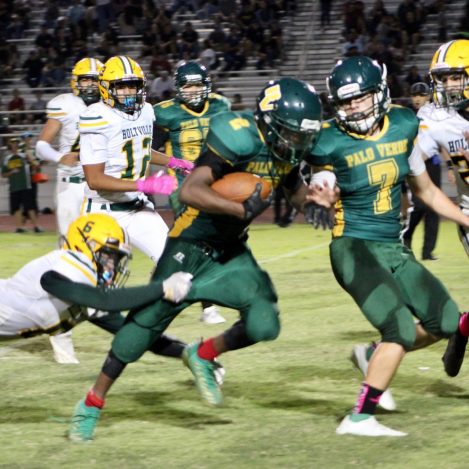