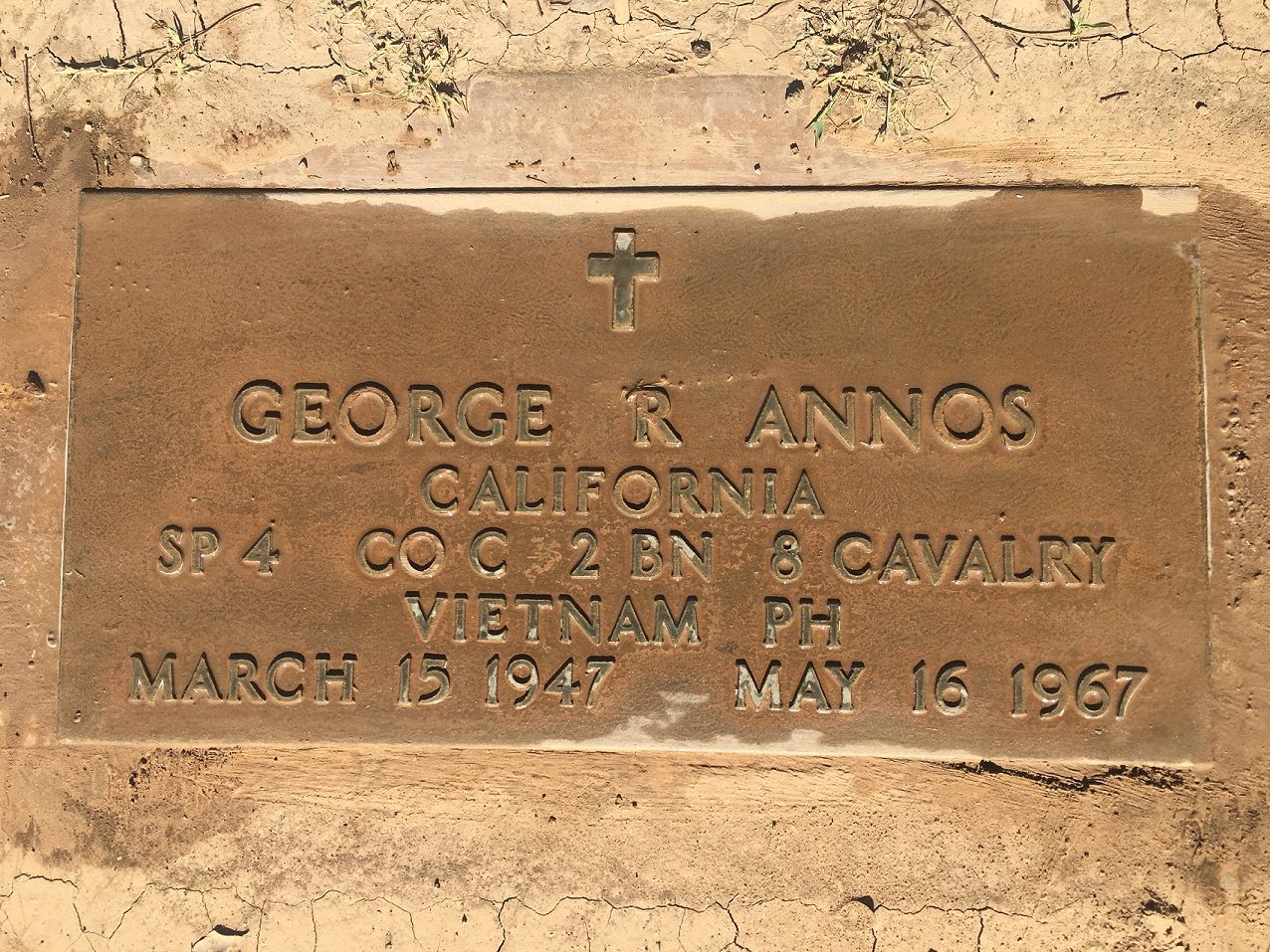 CALEXICO — Calexico native George Richard Annos is one of about 58,000 U.S. soldiers who died in combat during the Vietnam War.

He had been in country just six months when he was killed in action by “short fire,” an artillery or mortar round that fell short of its intended target. Annos died due to an accident, also known as a “friendly fire.”

Annos’ fellow combat men and friends remember him as a good man, a brave hero and someone who deserves to be remembered every day, not just on Memorial Day, when we commemorate those servicemembers who gave the ultimate sacrifice to their country.

“George, as so many others that served during a war, are the real heroes,” said Fernando Escalante, fellow infantrymen, and classmate of Annos’ at Calexico High School. “They didn’t get to come home. For those that died in Vietnam, there were no bands playing, no speeches, no nothing.”

Annos was born on March 15, 1947. He grew during the ’50s and ’60s on Rockwood Avenue, across the street from Ben Valenzuela, a fellow Vietnam veteran.

Valenzuela remembers Calexico in those “innocent days,” when you could safely play baseball until midnight, and everyone knew each other, and that was just the way it was.

“I knew him since we were kindergarten,” Valenzuela recounted. “We were very good friends since he lived across the street.”

They grew up together and were on the same sports teams.

“We challenged each other, and were just having a good time,” said Valenzuela. “His little brother, Eddie Annos, was very good friends with my younger brother, Louie. We had a tight relationship. Everybody in Calexico knew everybody, you did the best with what you had, which it was.”

Annos was known as “Bomber.”

“Back in high school, he got busted for making a makeshift bomb out of firecrackers, so the nickname ‘Bomber’ stuck with him,” Valenzuela said with a laugh.

While in high school, Valenzuela remembers how the two spent most of their time on the football team, trying to look cool in front of girls, and hanging out. The two were also part of their own club. They called themselves the “Latins.”

“It was a group of about 16 guys, going to a dance, wearing the same dressed-up clothes trying to hit on girls. We did that for about two years, our junior and senior year,” Valenzuela said.

Valenzuela remembers he and his friends would drive around Calexico and just “hang out” when they were young.

“We’d go to school, and then later that evening, we’d go to Owen’s, the local drive-in, and have a bunch of laughs and enjoy our time — that was basically our lives,” Valenzuela said.

Soon after senior year, their lives changed. Valenzuela and Annos were drafted alongside their other friends and classmates.

“We all knew we were destined to go to the Army, that’s something you did. It wasn’t unexpected. It was our turn. That’s how I felt,” Valenzuela said.

Soon the young men were drafted and taken to Los Angeles. Valenzuela remembers how he was “packed into what looked like a labor truck” alongside about 30 others.

“There were kids from El Centro, Brawley and Imperial. We knew some of them because we played against them,” Valenzuela said.

Before boarding the bus, a local newspaper had taken a photo of them.

“My mom had that picture. I remember seeing it. I saw how young and dumb we looked back then when we got drafted,” Valenzuela said.

From L.A., they were sent to Fort Hood, the reception center in Texas. Valenzuela, Annos, and their classmate, Carlos Basabe, planned on going “airborne” or becoming soldiers trained to parachute into battle. While Basabe and Valenzuela signed up to go airborne, after boot camp, Annos signed up before.

“At that time, we told Bomber, ‘I’ll see you then.’ We went to Fort Riley in Kansas, and I think Bomber went to Fort Benning in Georgia. The reception center was the last time I saw him,” said Valenzuela.

While in Vietnam, Valenzuela had gotten the news that his friend had died through a military newspaper. Later, his mom wrote to him.

“I told my mom that I wasn’t out in the jungle, doing the same things as a Bomber; I lied. I kept what I was going through, and where I was, very private,” Valenzuela said.

Valenzuela and Basabe were together when they got the news of Annos’ death.

“I remember sitting with my friend, Carlos Basabe. It was hard for us to understand and believe that Bomber was no longer with us,” Valenzuela said. “It’s sad for me when I think about it. You think a lot about what you did differently to survive that; you question yourself all the time.”

Valenzuela remembers that living in Vietnam was hard. Thinking about Vietnam now, he is in disbelief of what he went through.

Fernando Escalante shares similar sentiments of his time in Vietnam.

“My first month in Vietnam, in October of ’69, everything went very well. I thought that it would be like being in the Boy Scouts, camping,” Escalante said. “In my second month, all hell broke loose.”

During his second month, Escalante lived through five hours of an invasion of the North Vietnamese Army on their base, Firebase Jerri. This same month he also had his first exchange of gunfire, a “firefight.”

“It was not like seeing a John Wayne movie,” Escalante said. “The enemy was for real, and they loved hunting us, and killing us.”

Escalante explained that Vietnam combat infantrymen still call their wartime buddies “brothers,” because they did their job to survive as brothers.

“When I saw my combat brothers get KIA or WIA (killed or wounded in action), all of us changed, and we adapted to survive. We fought for each other,” said Escalante. “My brief wartime story is probably what George Annos went through. It was like a nightmare, surreal, but nevertheless, it really did happen. Unfortunately, George, like many others, didn’t come home.”

On Memorial Day, we remember the thousands of Americans who lost their lives in combat, like George Richard Annos. “It’s important that we honor all who served in the military during wartime and died for their country. The brave ones that didn’t come home should never be forgotten,” Escalante said. “Freedom is not free.”