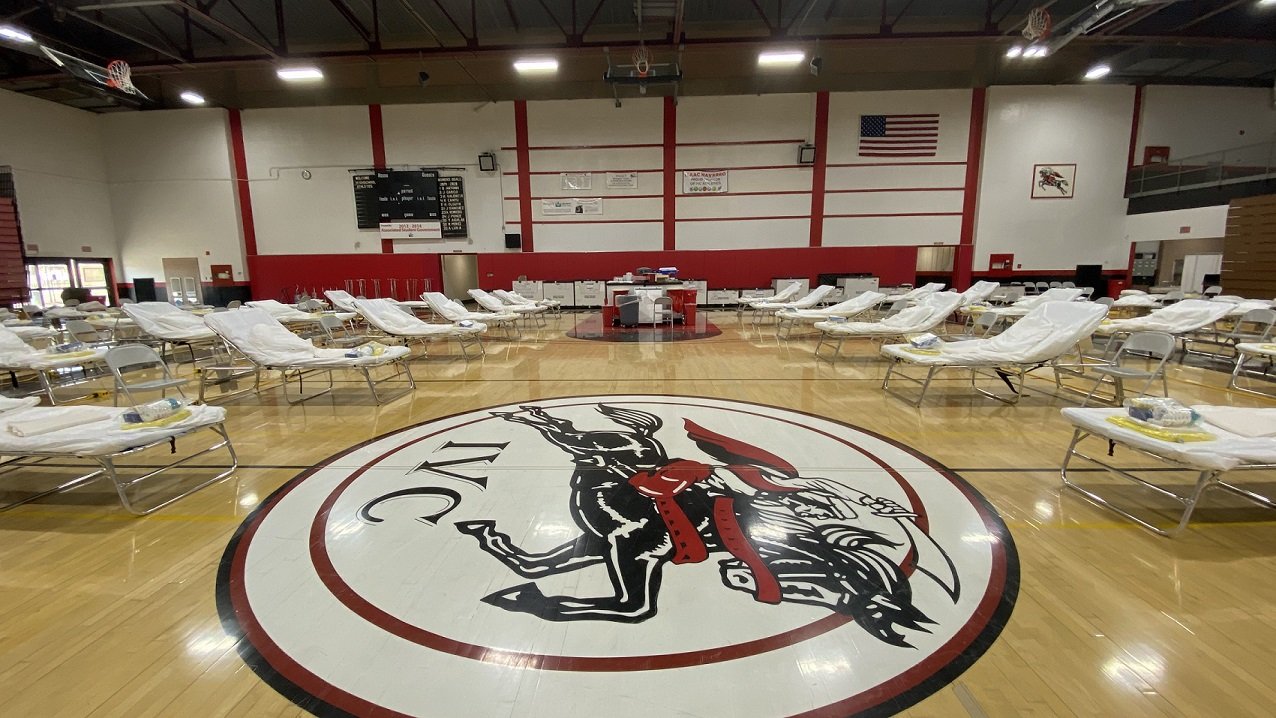 Sterile, unused beds at the Alternate Care Site established in the Imperial Valley College gym are shown several months ago. El Centro Regional Medical Center sent its first patient to the ACS on Thursday morning, Nov. 19, as the facility reopens to accommodate patients in this second wave of COVID patients. Pioneers Memorial Hospital has not sent any patients yet. The ACS was elevated from “warm” status to “patient-ready” status last week. | IMPERIAL VALLEY COLLEGE PHOTO
Home
COVID-19
In COVID-19Regional News

IMPERIAL COUNTY — Although the Federal Medical Station at Imperial Valley College had what one official described as a “soft opening” this week, there were already six COVID patients under quarantine there as of May 27, just two days into its operation.

With the number of COVID-19-positive cases in Imperial County continuing to surge and hospitalizations occurring at a steady rate, there is need for the facility even as retail businesses and churches can resume some level of re-opening.

Imperial County Supervisors’ Chairman Luis Plancarte said the facility will be at IVC for two months, and it’s a double-edged sword that it’s even here.

“We are very lucky to be able to marshal the resources to have it here,” he said. “But by that same token, we never wanted to (have to) have it.

“It’s an eerie feeling,” he added.

Imperial County numbers of new cases of COVID appears to be somewhat unstable as Public Health Department officials struggle to meet state metrics for “epidemiological stability,” which Plancarte said we are far from attaining.

Based on the number of tests being administered in the county, the percentage of those testing positive for novel coronavirus should be decreasing, but they are increasing, Plancarte said during a press conference May 26, a fact he reiterated during an interview with this newspaper May 27.

He said a couple of weeks ago Imperial County was largely testing first-responders, frontline health workers and symptomatic patients. Now, anyone who wants to be tested who can get referred to the many testing venues can do so, including people who are asymptomatic, or those who are not presenting telltale signs of the virus.

Last week the county was at 24 percent of those tested, and this week, Plancarte said, that number has risen to 29 percent.

“Obviously, it’s concerning,” he said, adding the county saw a bump in cases due to Mother’s Day (May 10), which likely stemmed from family celebrations that put people in close proximity to each other, in spite of county health orders that require people not doing “essential business” to stay at home.

Public health and hospital officials are waiting to see what kind of an increase might come with the recently passed Memorial Day holiday, May 26, and the upcoming Pentecost on May 31, when many local churches hope to have some sort of service.

Plancarte said the surges are being seen anywhere from seven to 10 days after the holidays.

As of May 27, Imperial County has had more than 1,440 positive cases of COVID, with 10,145 patients tested. There were presently 610 active cases. Although the number of what is considered new cases has been missing from the county’s surveillance dashboard for the last few days, it’s new cases that are being closely eyed by the state metrics and local public health officials.

To further move down the state and county’s so-called Roadmap to Recovery, one of the key metrics of “epidemiological stability” — and the only bar Imperial County has not reached — is a county’s ability to have 8 percent or less in the number of COVID-positive patients of those tested for seven consecutive days.

That’s where the 29 percent Plancarte referred to fits in.

Meanwhile, many parts of California are now moving into Stage 3, Gov. Gavin Newsom announced during a press conference just before noon May 26.

Plancarte said the Federal Medical Station is opening slowly. It was built and is being operated locally in conjunction with the California National Guard and California Emergency Medical Services Authority’s Medical Assistance Teams (CAL-MAT).

A limited number of patients are being brought in to try out procedures and equipment, make sure there are enough supplies and see if the necessary protocols are in place, Plancarte said.

“You want to make sure you’re not overwhelmed by larger numbers coming in,” he added.

The “ramping up” of operations will be under the direction of Imperial County Emergency Medical Services Agency Medical Director, Dr. Kathy Staats.

The facility is equipped to handle 80 patients, with large tents constructed outside IVC’s gym for patient overflow, he added.

Pioneers Memorial Hospital in Brawley hasn’t sent any patients to the federal facility yet, spokesperson Karina Lopez confirmed May 27.

As of the afternoon of May 26, Pioneers had 19 COVID-positive patients, seven of whom were in the intensive-care unit, Lopez said. She added nine COVID patients were on ventilators of 30 total machines available.

On the other end of the Valley, El Centro Regional Medical Center had sent two COVID patients to IVC on May 26 and four more the morning of May 27, Chief Strategy Officer Cathy Kennerson said.

On May 26, there were 47 COVID patients in the hospital with 13 of them in the ICU, Chief Executive Officer Adolphe Edward said during his Facebook Live update.

Edward mentioned during the Facebook session that hospital officials were to meet to discuss clinical criteria to move COVID patients from the medical center to the federal facility. That criteria wasn’t immediately available from El Centro, but Kennerson said Edward did want to see it loosened a bit, presumably to send over more patients and alleviate the impact on ECRMC, which has been getting the bulk of the COVID patients in the county.

Pioneers officials did provide a sketch of the clinical criteria needed to send patients to the federal facility.

IVC is described as “an alternate care site meant for stable, low-acuity COVID-positive patients who require ongoing professional care. The aim is to decompress Imperial County hospitals so that they can continue to care for sicker patients,” according to the criteria document dated May 25.

Further, the patient must be able to return to their prior living situation, patients are made aware of the living conditions, that is, no private rooms, shared bathrooms, not many true hospital beds but cots, etc.

Patients cannot be a threat to self or others, and they cannot require a “sitter, 1:1 (ratio) or safety checks. No delirium or acute mental status changes in the last 24 hours. Able to communicate with medical staff,” the document states.

Medication, supplies, and equipment must arrive with patients, there are no labs, dialysis services or isolation units available at the federal facility, and as far as nursing care, there is “no continuous monitoring is available. Vital signs will only be checked twice daily. If patient requires time intensive or specialized nursing cares (continuous/frequent/multiple IV medicines, wound vacs), this must be discussed with IVC charge nurse,” the document states.

Update on the Roadmap to Recovery

Part of what occurred out of Newsom’s announcement May 26, and later reiterated by the county, was movement and changes to the state’s Roadmap to Recovery.

While most of the state was allowed to move to Stage 3, which includes the re-opening of barbershops and hair salons, and dining in at restaurants with strict social-distancing protocols in place, much of the news did not affect Imperial County.

Rather, because transmission rates and percentages are still so high, Imperial County is in the low end of Stage 2, trying to move to the higher-end of Stage 2.

What was affected, however, was the limited re-opening of churches to some extent, which is detailed in another story in this edition and on our website, and the movement of formerly nonessential retail businesses from the higher end of Stage 2 to the lower end of Stage 2, where the county is now.

El Centro Warns of Skatepark Closures If Masks Not Worn

What changes is, businesses that were open to retail curbside pickup and delivery (except for restaurants) can now open to foot traffic with strict physical-distancing guidelines in place.

Calexico City Manager David Dale, for one, was pleased to hear about the development. Calexico’s economy, which is largely dependent on retail business from Mexicali shoppers, indicated this a positive step forward.

“I know county staff is doing everything they can to get businesses open as soon as possible. I have been in Zoom meetings and conference calls and have seen how hard they are working to make this happen. I am pleased that retailers and houses of worship can now open their doors, at least to a limited extent,” Dale stated.

“It is our hope that people follow the social-distancing rules, hand washing, wearing face coverings, avoiding large gatherings, etc. to slow the transmission of the virus in this county, so that we can move into the next stage of reopening. Also, we encourage everyone that can to get tested for the virus,” Dale stated in an email to this newspaper.

Yet, as the rest of the state goes out for a haircut, barbers in the Valley are still smarting.

“I think we need to open. I get calls every day asking if I am open, so the community is eager to get back to some normalcy as well. I think my shop is just as safe as any place, especially with the new guidelines. I have planned for a complete change in practice with eliminating walk-ins and staying strictly appointment only,” Zavala stated through Facebook Messenger.

“We have pre-existing sanitizing requirements implemented by the state and have already ordered products to enhance and add to those processes. Masks are required by the county and I will extend that into the shop. The extended lock-down is affecting the livelihood of barbers (and other businesses deemed non-essential) as well as the community’s economy. I say open up,” Zavala stated May 27.

Sergio Verduzco, owner of Clip Em Up Barber Shop in El Centro, is frustrated that he must keep his doors closed and blames county officials for what barbers are experiencing.

“They are saying we are not allowed to open as a county because no council members submitted a plan or a roadmap for how barbers could work toward reopening,” Verduzco said.

Verduzco was aware that Imperial County is one of the only counties in the state in which barbers are still not allowed to operate.

“It’s kind of dumb. If you think about it, you can drive two hours to San Diego to get a haircut. They are our neighbors, but you can’t get a haircut here,” he added.

But Plancarte explained, like churches resuming full scale, barbershops, hair salons, people eating in restaurants, even with guidelines, there are increased infection risks, that’s why the state left them in Stage 3 but modified.

“When you increase proximity and increase time of exposure, it increases rate of transfer,” he explained, and therein lies the rub with re-opening barbershops, hair salons and personal services too soon.

He said a great example of the mixed openings at work will be the re-opened Imperial Valley Mall, where hair salons, nail salons and barbershops, as well as dine-in restaurants and the gym will be off limits, but formerly nonessential retailers will now be re-opened, and even ice cream shops will allow you to grab a cup or cone and move along, he said. It’s prolonged personal contact that is under scrutiny and not allowed, Plancarte explained.

Previous
Holtville High Graduation Will Light up the Night 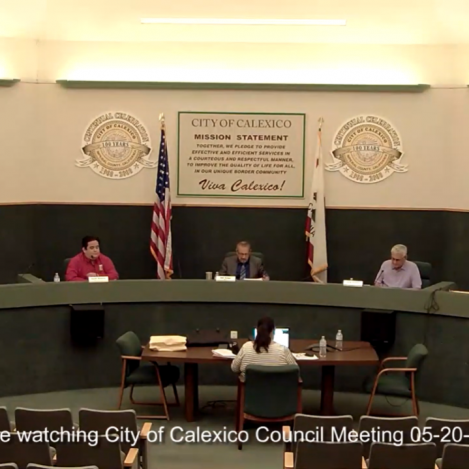