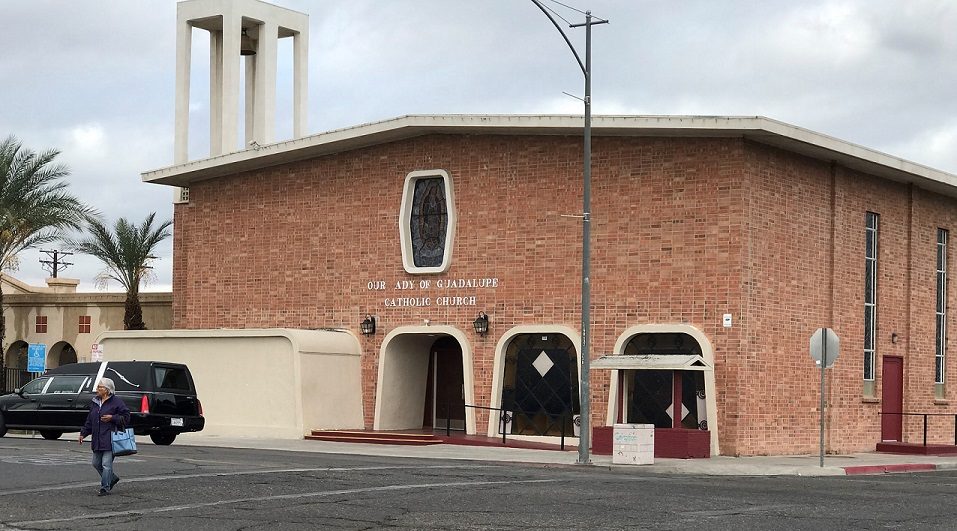 Our Lady of Guadalupe Catholic Church on the corner of Fourth Street and Rockwood Avenue in Calexico is shown Nov. 20. | Richard Montenegro Brown Photo
Home
COVID-19
In COVID-19Featured StoriesRegional News

IMPERIAL COUNTY — Imperial County Public Health Department officials announced guidelines to re-open churches that left some local pastors shaking their heads, unsure of how to operate under such strict regulations.

The Rev. Mark Edney, priest at Our Lady of Guadalupe and St. Mary’s Catholic parishes in El Centro, which together serve more 4,000 parishioners, sat alongside county and small businesses officials when the county made its announcement at a press conference May 26.

“To me, the most positive development in this is that in the Catholic services, we will be available to preform funeral Masses. I have 40 Masses waiting to be done. Baptisms and other sacraments will be possible. This is a hard and difficult experience for all of us. If you are a person of faith and unable to practice that, it is a hardship that is unbearable,” Edney said at the press conference.

Edney was grateful for the opportunity to be able to conduct service but recognized the crippling limitations his churches would experience under the newly announced state guidelines for re-opening, which are 25 percent of total capacity of the facility or a maximum of 100 people; whichever number is smaller, explained county health officials.

“The one objection I have is the capacity limit is very difficult. In my two parishes I have 4,000 regular Mass attenders on the weekend. What will I do with a capacity of 100? Do 40 masses a weekend?” Edney said.

He added during the press conference such an “arbitrary limit … doesn’t seem just.”

Meanwhile, some local clergy members are already saying they will not immediately resume in-person services under the state’s new conditions, calling it impossible to do.

In an interview over the phone after the press conference, Edney explained that he answers to a higher authority who will determine when he opens his doors.

“The Catholic Church will resume weekend Masses on the weekend of June 13/14. What am I going to say to 4,000 people trying to come in?” Edney once again asked.

That date was announced a day earlier by the bishop of the San Diego Diocese of the Catholic Church, which oversees Imperial County.

Numbers aren’t the only limits placed on churches by the state. During the press conference, county Public Health Officer, Dr. Stephen Munday, said, “Singing, reciting prayers, and the passing of an offering dish are restricted by state guidelines for churches to reopen.”

Munday explained strict auditory regulations are in place because the coronavirus is highly contagious in instances of aerosolization, the dispersal of a substance through the air, and he said studies have shown loud speaking and singing can spray the virus beyond social distancing distances of six feet.

The county health officer also referenced a tragedy in March in Mount Vernon, Washington, where a choir practice left 52 infected, two members of whom died from the virus.

When asked about the county’s ability to open restrictions for local religious centers, Munday said, “We can make the regulations stricter, but we cannot make it less strict than what the state standard is. So, for us to move to a larger number, the state will have to change their parameters.”

Regardless of an inability to modify state regulations, those clergy members interviewed for this article commented on how gracious county officials have been in working with local churches to re-open.

“The county has been a blessing, working hard to get churches re-opened. We are very grateful for the dialogue that local county officials, and especially the city of El Centro, has been willing to work with churches. The governor was trying to appease faith-based communities across California but for the larger churches it doesn’t help,” said Walter Colace, head pastor at Christ Community Church.

Although Colace wants desperately to revive his Sunday worship program, he feels there are bigger fish to fry at the moment.

“There is a spike (of COVID-19) in the Valley. Christ Community Church is not ready to open. There are members of our congregation who have COVID-19,” Colace said. “We are trying to put in security procedures and guidelines to keep our congregation safe. I’m happy to see other churches can open, but we are still in the preparation phase.”

Colace said he feels that county officials are backed into a corner and want churches open and that the governor will reach a point where he has to trust that people are able to be responsible in following the guidelines.

The main regulation that all pastors with large congregations have qualms with is the 100-person maximum limit for church services.

“For us, the new guidelines don’t help at all. Our sanctuary seats 1,147 and at 25 percent capacity, we would be able to have 286 people. Under state guidelines we are only allowed 100 people, and we will need at least 20 people to help run the service. Holding services in this way will frustrate people more than help them,” Colace said.

Lead pastor at Faith Assembly in Imperial, Dan Bruce, is praying for guidance in deciding whether it is safe to re-open with the current surge of new cases in the Valley.

“I am in two minds. On one hand, I absolutely take this virus seriously and want to see no one catch this and no one have to suffer through this sickness. On the other hand, it is very frustrating that our church is not able to operate as freely as I would like,” Bruce said in a phone interview.

He said he feels that churches can operate more effectively in terms of respecting state regulations than the big-box stores long deemed essential by the state and does not agree with such strict regulations being placed on churches.

“The guidelines are so strict that you can’t meet them. If we can only have 100 people in the room at a time, including worship team, tech people such as sound, lights, computer, ushers, greeters, people at the door to take temperatures and even having minimal staff, you’re gonna use up at least 25 of those 100 positions just to have the infrastructure to put a service on,” Bruce said.

He added that is likely why Faith Assembly will not re-open under these restrictions.

Bruce described how each of the guidelines would undermine any attempt made to hold a Sunday service.

“They are disallowing public singing, passing the offering plate, even saying prayers allowed. They want to limit preaching because they are saying singing can spread aerosol 21 feet. I am gonna kill 21 service people trying to do eight services a day. From what I see is that only small churches could follow those regulations,” Bruce said.

Bruce said March 31 was a target day for many churches to open because of the Pentecost.

“Pentecost is a day that is considered the birth of the Christian Church. In Acts 2 in the Bible, Pentecost is the day God poured out the Holy Spirit on people, Peter gave out a service and 3,000 people came to the love of Christ. There is a movement in many churches that are going to defiantly open (to greater numbers that what the state is allowing) on Pentecost,” Bruce explained.

Bruce said that at a recent meeting of local church leaders, the vast majority of pastors in the area agreed to not hold services this week.

Pastor Fernando Lainez of Turning Point Ministries in Holtville has been giving his weekly Spanish-language Sunday services via Zoom since the quarantine began. Lainez offers the perspective of a how a small church can be severely impacted by the state regulations to re-open.

“My church is small, maybe 80 people. This ministry has only been open for two years. My maximum capacity is 80 people. I will need at least five people to help run the service, so that leaves me with only 15 seats for each service,” Lainez said.

With these hurdles in plain sight, Lainez is enthusiastic and cautious about how he will proceed.

“We are going to take things very cautiously and follow the rules of the county to avoid spreading the virus. I am going to have two services on Sunday. We will also stream our service live on Facebook,” he said.

Church services at Turning Point will not be the same as they were before COVID-19, Lainez said.

“I feel sad because with all the congregation coming together, singing, clapping hands in the presence of the Lord, is the best part of our church. It feels weird not being able to do that,” he said. “A Hispanic church is big on worshiping God. My hands are tied. I will probably give a sermon and that’s it.”

Pastor Felicia Carter of Solid Rock Christian Ministries in Imperial has decided against re-opening her church to in-person services.

“I feel for those that choose to re-open; that’s their choice. Being in the Imperial Valley so close to the border and the outbreak, we need to use wisdom. Our congregation has a lot of elderly people who are more prone to catching the COVID virus. Speaking on behalf of Solid Rock Christian Ministries, we are doing the best we can using Zoom and Facebook Live. We are not planning to open,” she said.

“This is the time you focus on yourself, do your cleansing, get closer to God, and figure out how you can serve those who are in need,” Carter said. “You’re not shut down as you are being quarantined; this is your self-cleansing process.”

Meanwhile, Lainez was to meet the morning of May 26 at Turning Point Ministries with a large group of local pastors to discuss how to move forward regarding the new guidelines for churches and the current wave of new COVID cases. The meeting occurred after this newspaper’s deadline.

At the county’s press conference, the elephant in the room, a tidal wave of new COVID-19 cases in the Valley, seemed to take the wind out of Gov. Gavin Newsom’s announcement earlier in the day of regulations to re-open churches and the overall movement of most of the state’s counties to Stage 3 on the Roadmap to Recovery.

“We are (still) talking about are moving from Stage 2 low risk to Stage 2 high risk. As a community, we need to move into the upcoming stages in a very safe and healthy manner. We need to think about mid-term and long-term,” Angulo said. “It will take every single one of us in the community to stop the spread of COVID-19. The last thing we want as a community is to move back into Stage 1. We want to reopen, but we want to re-open in a very safe and healthy manner.”

Although Imperial County has met nearly every standard the state has set to move forward, is far from the one key metric on “epidemiological stability,” a requirement that the county have 8 percent or fewer new cases of COVID among those tested for a period of seven days. “We are still testing very high per our capacity at 29 percent. Whether it is the Mother’s Day bump or not, I am very concerned. We should be at 8 percent. I encourage you to go get tested. There should be ample testing in the community,” Imperial County Supervisor and board Chairman Luis Plancarte said near the end of the press conference. 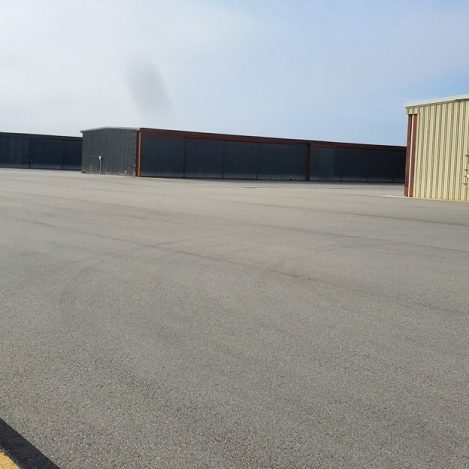