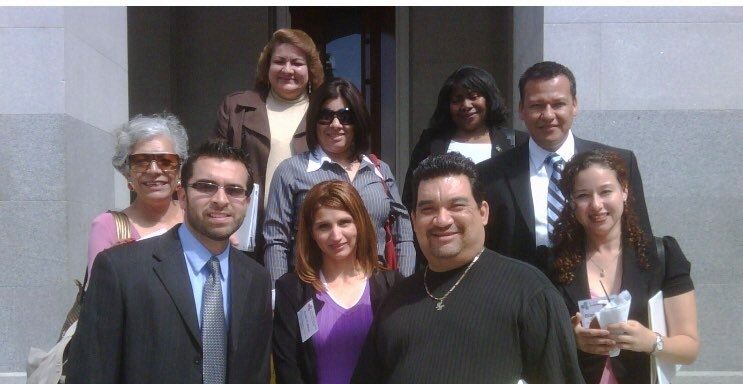 A group known as Vecinos Del Rio Nuevo, or Friends of the New River, was lobbying for the passage of the bill that would create the New River Strategic Plan in Sacramento about 10 years ago. Those in the photo include Emma Rosa Silva (far left) of Calexico, now-Calexico Assistant City Manager Miguel Figueroa (next to Silva) and Comite Civico Del Valle Executive Director Luis Olmedo (top right), among others. | COURTESY PHOTO
Home
Featured Stories
In Featured StoriesLocal News

CALEXICO — Like all locals who have long advocated for North America’s filthiest waterway to be cleaned up, Calexico resident Emma Rosa Silva is happy to know state funding for the New River Improvement Project survived last week’s May budget revise.

But Silva, who lives about a quarter-mile away from the river and can see the detritus and sudsy backwash of the fetid waters from the street in front of her home, is a little more practical about what lies ahead.

She’s heard a lot of promises over the years and has seen a lot of near misses when it comes to efforts to address the New River.

“I still have to see it with my own eyes,” Silva said May 19, referring to the completion of the New River Improvement Project, which has been allocated $28 million in the proposed 2020-2021 state budget, all but completely funding the project that has been around 15 years in the making.

“I have to see the tractors, the bulldozers, the things moving at the bottom of the New River,” Silva said via telephone from her home. “Hopefully, I’m going to be able to see the whole thing finished.”

Despite a massive budget deficit caused by the COVID-19 pandemic that has seen proposed funding cuts across the board in the release of Gov. Gavin Newsom’s May 14 revised budget, funding for the New River remained whole … so far. The budget must still make it through the Legislature and be signed into law in July.

In fact, an Assembly budget subcommittee on resources and transportation was to review the $28 million funding proposal for the New River Improvement Project during a hearing May 21.

Don’t let Silva fool you. She very much has had a personal stake in what has happened to this point.

A local leader in the movement to clean up the river more than 15 years ago as a member of the “Madres del Rio Nuevo,” or “Mothers of the New River,” she went on to be a key figure in “Vecinos Del Rio Nuevo (Neighbors of the New River),” which collectively worked with residents living along the river, environmentalists and local politicians and Calexico officials to lobby state lawmakers in Sacramento for seed funding that would create the comprehensive New River Strategic Plan and, later, fund the more specific New River Improvement Project.

“I’m very glad for all that is happening right now,” Silva said, especially for many of the figures who have worked for years to get promises fulfilled and funding commitments honored.

Silva’s environmental action on the New River began with her own health conditions. The “fumes” and smells of the river have been affecting her “allergies” for decades, saying whatever is in the toxic waters have long caused her “watery eyes, sneezing, and itching.”

Silva said she’ll be overjoyed to see others suffering similar fates finally get to see some relief.

State of Improving the New River

Although the state funding of the New River Improvement Project remains intact, local officials said this is not the time to let down the pressure.

Luis Olmedo, who helped form “Vecinos Del Rio Nuevo” so many years ago, pressed that local leaders need to write lawmakers to keep up the fight all the way through July.

“If (the funding) does get cut, it will happen at the Legislature,” Olmedo said May 14, the afternoon Newsom’s budget revise hit the streets. “This is why now it’s very important that our entire region — every letter, every phone call — all be in unity. … We need to keep it front and center.

“As a community we have to celebrate the wins. It should not be taken lightly that the Governor made it a priority in that it survived the deep cuts (due to COVID) because of (the New River’s) public health risk and urgency,” Olmedo said.

“We’re still not out of the woods. We need to make sure the Legislature also knows this is a top priority and it is a risk not only to our region but it is a high risk of infection and disease and virus that is consequential internationally,” Olmedo added. “Nationally, we already (have) seen how quickly virus is spread. We can no longer afford to ignore these breeding grounds for pandemic conditions.”

Miguel Figueroa, who arguably has worked longer and harder than anyone on New River efforts, agreed with Olmedo.

“Getting past the May budget revise was a victory. The chances of the New River funding remaining in the final budget for FY 2020-2021 are higher after this last budget revision, but it is not a guarantee,” Figueroa stated May 18.

“We should continue to come together under one voice in our community, this includes community-based organizations, cities and the county. The Governor and his department secretaries will prioritize where funding will be best used at this time. We must consider that this pandemic has drastically changed previously agreed upon strategic actions where funding would be appropriated,” Figueroa said.

At stake is a total of $28 million in the proposed budget that would ultimately go into the completion of parkways and infrastructure at the river that would clean up the waters where they enter Calexico from Mexicali. Through the utilization of trash screens, tertiary water treatment and encasing parts of the river, there would also be beautification and alternative uses for the surrounding area with walking/biking areas and a “fresh water” stream.

Assembly Member Gears Up for Fight

Assembly Member Garcia (D-Coachella) put together a group of Imperial Valley stakeholders in a Zoom-based meeting to talk strategy May 20 in preparation for the May 21 budget subcommittee hearing in Sacramento, according to a press release from his office.

“While we successfully ensured that the proposed $28 million for the New River Improvement Project remained in the Governor’s budget May revision, we must continue to present a strong, unified front to protect and secure these funds. COVID-19 has left our budget in a precarious situation. California is facing significant cuts across the board. The public health, environmental, and economic stakes are higher than ever, and we cannot let this opportunity slip through our fingers without a fight,” Garcia stated in the release.

In addition to rallying local stakeholders, Garcia is encouraging community members to submit written testimony in support of the $28 million to the “Budget Subcommittee No. 3 on Resources and Transportation.”

Written testimony can also be submitted to BudgetSub3@asm.ca.gov.

Federal Funding for River Dries Up

Imperial County District 1 Supervisor Jesus Escobar, who represents the Calexico area for the county and is a former Calexico City Council member, said he is hopeful the state funding while remain whole, despite the recent bad news that federal support for cleaning up the New River failed to gain any ground.

“I applaud Gov. Newsom,” Escobar said May 19, “but I’m extremely disappointed that federal funding is lacking.”

While the state does all it can to come to the aide of Calexico, Escobar said the federal government is not meeting its obligations in ensuring clean water is a right of every citizen of Imperial County who lives along the route of the New River.

Although the river’s stench and the bulk of the toxins stay in the Calexico area, its polluted waters meander northward through nearly every community in the west end of the county, from Seeley, Imperial and Brawley, until it empties into the Salton Sea.

Clean water is “not a luxury, it’s a right of every citizen,” Escobar said.

It was recently learned by the county an EPA spending plan omits the New River from receiving funding from a $300 million cross-border agreement meant to tackle toxic sewage flowing from Mexico.

The entirety of the funding, approved under the United States-Mexico-Canada Agreement Implementation Act, will address sewage flowing into San Diego County through the Tijuana River Valley as part of the plan presented by the EPA to Congress, it was announced late last week by California Congressional leaders.

Imperial County announced May 19 that it has challenged New River being left out of the spending plan through a letter to Andrew Wheeler, EPA administrator, and separate letters to Congressional delegates Sens. Diane Feinstein and Kamala Harris and Congressman Juan Vargas (all California Democrats) seeking their support to address the omission, according to a press release from the county.

Sewage flows from Mexico is a major contributor to the problems at the New River. In Mexicali, a pair of aging wastewater treatment plants is often the source of breakdowns and raw-sewage discharges into the water, which flows into Imperial County untouched.

County officials have advocated changes to federal water standards and federal dollars to built water-treatment infrastructure on the U.S. side of the border.

Meanwhile, Silva said she hopes the health issues she has endured, and other people have experienced who live around the river come to an end once and when the improvement project gets built out.

“For future generations, there isn’t going to be any of these shenanigans. We’ll leave something positive behind. That’s what I’m proud of,” she said.

A straight shooter to her core, Silva added all the lobbying, the trips to Sacramento and being part of the movement was necessary to putting a face on the troubled river and its grassroots effects on the citizens.

“I’m not about the politics of these things … It’s something that needed to be done,” she said. “Government needed to see what happens in the boondocks of this little town by the New River,” Silva explained. 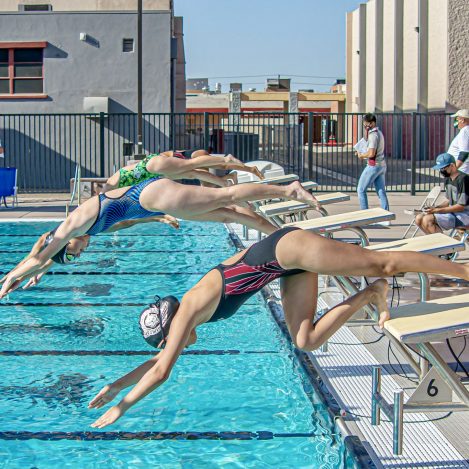