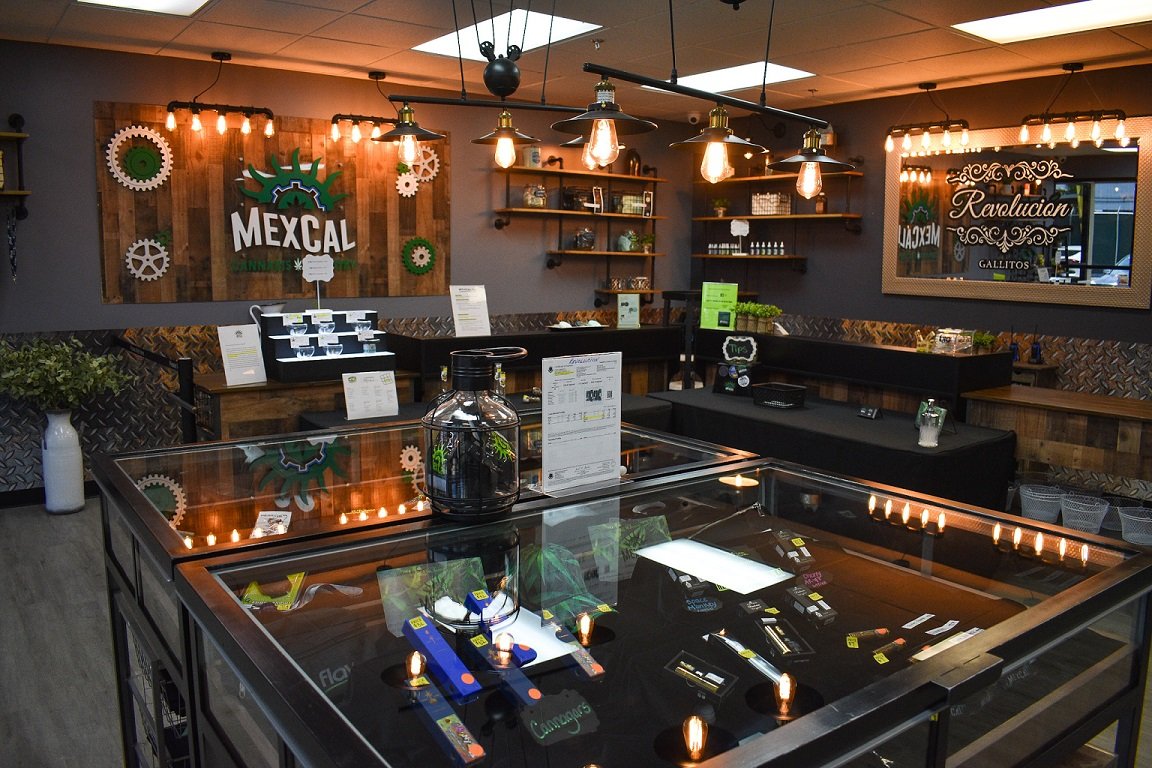 The inside of MexCal Cannabis Factory in Calexico is shown May 4. The legal pot shop is the first retail storefront with an onsite consumption lounge opened in the city of Calexico. The business opened in March and has largely been quiet as social distancing and the pandemic have been in full effect. Cannabis businesses in California were deemed essential businesses by Gov. Gavin Newsom. | CORISSA IBARRA PHOTOS
Home
Featured Stories
In Featured StoriesLocal News

CALEXICO — On the days MexCal Cannabis Factory operations manager Veena Voravudhi is in, so is her 10-pound Yorkie-poodle mix, “Mochi,” cuddling up to guests seated in the shop’s lobby area, waiting for a “bud tender” to help with a new discovery or a little of the usual.

“We put him in a cannabis bandana, and he runs around and greets people. He loves to be petted. He’s our little ambassador dog,” said the San Diego County resident, who arrives in Calexico three to four times a week to run the city’s first open retail cannabis storefront.

Although MexCal Factory has been open for several months, a low-key grand-opening event in March and a worldwide pandemic some might have heard of has kept tell of the shop relatively quiet.

“We feel honored and humbled to be here … we’re dedicated to bringing wellness to the Valley,” Voravudhi said during an April 30 interview. “It’s been great to get to know our community. … We’re learning about our customers and embracing our community.”

Taking their place alongside hospitals and “other medical facilities” in the state, yes, California’s legal pot shops are “essential businesses,” deemed so by Gov. Gavin Newsom just hours after he announced his intention to lock down the state with mandatory stay-at-home orders and nonessential business closures on March 21.

Since then, with the exception of a few poorly timed and confusing interventions by local police, MexCal Factory has been open, strictly adhering to physical-distancing protocols and arguably operating at half speed of what its city and state permits allow, including on-site consumption.

MexCal isn’t the city’s first sanctioned cannabis business to open; that distinction goes to Trinity 341, a manufacturing facility that produced cannabis-infused vape cartridges and was loosely tied to MexCal Factory early on but has since reportedly ceased operations in Calexico. MexCal is now operated by Calexico Distribution Co., also formally tied to Trinity 341 but now under a new partnership, with new owners out of the Los Angeles area.

The first retail business to open in Calexico was Supreme Greens in January, but it’s a delivery-only business. Also, Valley Greens, another delivery-only operation, and a cannabis-testing firm, Imperial Valley Environmental Laboratory Inc., have also since opened in the city’s Cannabis Overlay Zone, a largely industrial area of northern Calexico set aside for pot business. (The lab is actually in downtown Calexico, an allowable exception.)

But rest assured, MexCal Factory, for all intents and purposes, is “the first” for the city, a physical location where customers can come in, sit down, order recreational cannabis products that range from “flowers,” the smokable bud of the marijuana plant, to “edibles,” THC- and cannabis-infused foods and beverages, and other assorted high-inducing products.

“To be the first of anything is always a good thing,” Calexico Mayor Bill Hodge said of MexCal Factory’s opening in the city. “Not to be too critical, but Calexico, as fast as we were to initiate and proceed with cannabis businesses in the city, we have lagged a little bit.”

But it’s better late than never, the mayor said, as the city anticipates sales and cannabis tax revenue to come from a robust recreational cannabis industry in the city.

The MexCal Experience During COVID

For the time being, the operation of the shop is a bit hampered by the COVID-19 pandemic, Voravudhi indicated.

No more than two people at a time are allowed in the lounge/lobby and no more than four at a time can fit on the retail floor due to physical distancing. Also, the on-site consumption area, which is really nothing more than a patio table and a couple of chairs beneath an awning where customers can “take a few puffs” before going home, Voravudhi said, has been temporarily closed and cordoned off due to COVID restrictions.

Other than that, it’s business as usual, she said.

With a 4.8-star rating on the vaunted Weedmaps website (those in the know understand that is the gold standard for cannabis websites and rating systems), Voravudhi said a trip to MexCal Factory starts with a check-in with private security, who makes sure you are wearing a mask, and if not, they’ll provide one.

The guard, a full-time employee contracted from a Calexico-area security firm, will check to see if you’re age 18 with a medical cannabis card, or if you’re 21 for adult-use recreational purchases, before entering the lobby, she said.

Upon entering, and possibly coming in contact with “Mochi,” a customer sees a 52-inch flatscreen display with a digital menu of products, specials and assorted videos, Voravudhi said.

Greeted by one of five full-time “bud tenders,” a highly trained and coached retail associate that Voravudhi likens to a coffee barista or a wine sommelier, a customer is called back to a retail space where MexCal Factory’s various products are on display and available in all pre-packaged amounts with multiple configurations per regulations in highly regulated California.

For instance, she said, “flowers” come in pre-packaged units of grams, half grams and “eighths,” which are 3.5-gram packages, vape cartridges (led by featured house brand “Revolucion,” which had been produced in Calexico by Trinity 341), pre-rolls (the modern-day moniker for “joints,” or cannabis cigarettes), and edibles, where there is everything from infused gummy candies and gold-wrapped, Tiffany-blue branded Belgium chocolates called “Colitas,” (yes, like in the Eagles’ song, “Hotel California”), to powdered “beverage infusers,” which you pour into your favorite drink.

A “bud tender” assists you in taking your order or showing you something new, wraps it up, checks you out, and you’re on your way to go get … well, medicated.

Due to federal banking laws, credit-card purchases of cannabis are not allowed in California, so there is an ATM on site for customers, Voravudhi said.

The state-of-the-art building has taken on a sort “steampunk” aesthetic in its interior, Voravudhi said, a style often described as science-fiction-meets-classical-Victorian, ala Jules Verne and “Twenty Thousand Leagues Under the Sea.”

Although in this context, it looks as if Voravudhi means the décor plays off the modern industrial feel of the cannabis zone itself with more classical, romantic flourishes inside.

For instance, although Voravudhi speaks volumes about the “working-man,” “blue-collar” affordability of the types of products sold in MexCal Factory that fit in with the economics of the region, she said there is also a very intentional branding toward female customers in Calexico, that is meant to make women feel more comfortable in the highly industrial environment of the overlay zone.

There is a “ladies’ happy hour” and “ladies’ swag bags” that include lotions, and lighters, and a notebook, she said.

Also, there is a whole world post-COVID-19 that is planned when the pandemic restrictions are lifted, events that were planned before the world changed in March.

Voravudhi said there were numerous special engagements scheduled or planned to bring in different segments of the community and show how widespread cannabis can be, including a “dog day,” in which a veterinarian from outside the Valley would come in and talk CBD therapies for pets with chronic pain maladies. CBD is the reportedly medicinal component of cannabis and hemp that has been seen as a miracle cure for many ailments.

She said community events were scheduled around ADHD/ADD, and events related to autism awareness and treatment, something that is particularly important to Voravudhi.

A Calexico woman with a daughter diagnosed with a full-spectrum autism disorder had previously traveled to San Diego to purchase medications for her child. Now, Voravudhi said, the woman stays in Calexico and gets the same products “for a much better price than she used to pay in San Diego.”

Voravudhi said it’s important and “great to be able to contribute to the community’s wellness.” 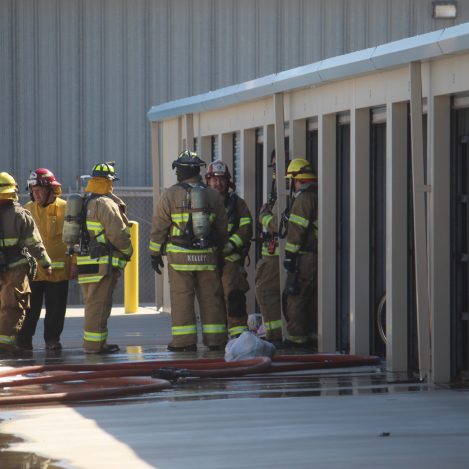