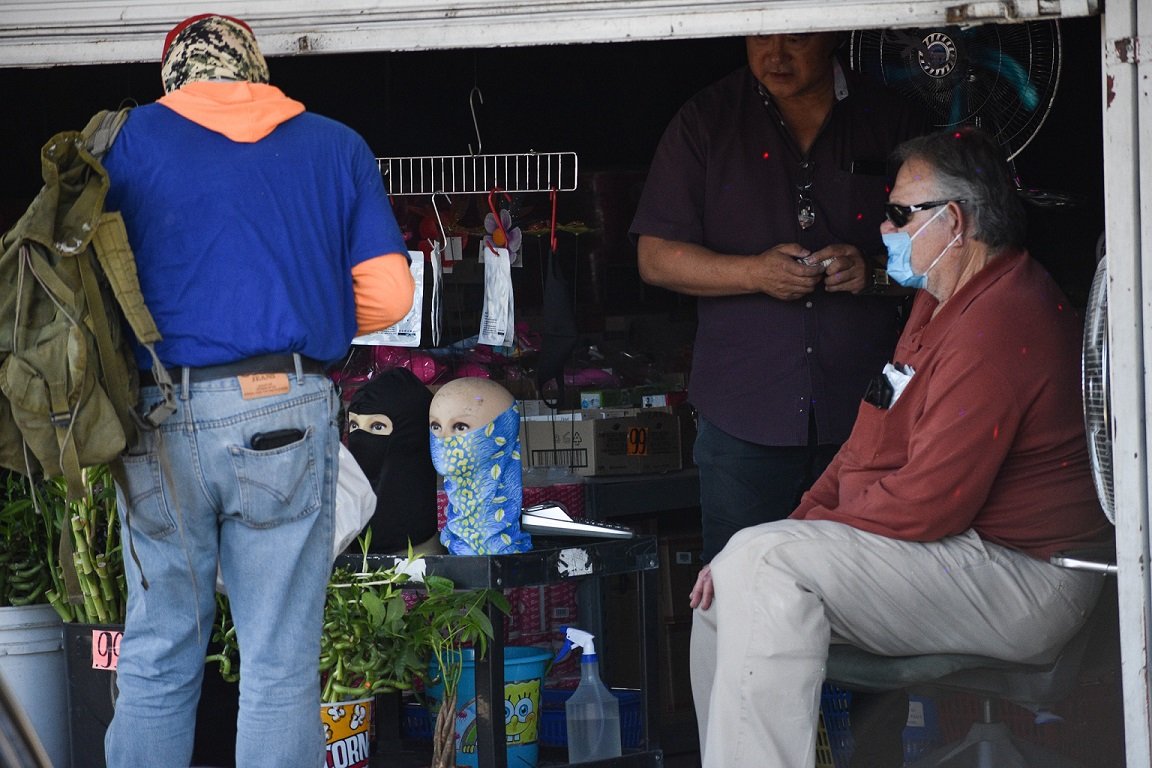 An unidentified man (right) looks at some merchandise just inside the open door of Uno Plus store on First Street in downtown Calexico on May 4. Seated (left) is Calexico City Council Member Morris Reisen and in the background near Reisen is Uno Plus owner Rudy Kim. It's unclear what is happening in the photo, but Reisen and Kim admitted Kim is selling some items like masks, hand sanitizer and fans to single customers on the sidewalk in front of his closed store, which has been deemed a "nonessential business" and ordered closed by the state and the county public health officer. | CORISSA IBARRA PHOTO
Home
COVID-19
In COVID-19Local News

CALEXICO — Already warned twice by police to close his downtown Calexico store, Uno Plus owner Rudy Kim continued to defy authorities by selling what he called “essential” items from his “nonessential” business.

“We have to pay our bills. I’m already two months behind and the owner wants their rent,” Kim said. “I cannot open the store legally, but I have to make some money to buy some groceries. I have no choice.”

Although Police Chief Gonzalo Gerardo said May 5 that his department would issue Kim a hefty fine if he was caught again, Kim had the support of at least one city official, Calexico City Council Member Morris Reisen.

Gerardo reported May 6 that Kim was indeed caught operating his store and was cited. The chief said Kim faces a fine of up to $1,000 a day for operating during a mandated closure. He added the fine will be at the discretion of a judge.

On the afternoon of May 4, Kim and Reisen could be seen defiantly perched on the sidewalk in front of Uno Plus on East First Street, with the business’ lights off and doors half open, as single customers came by to purchase things like masks, hand sanitizer and fans.

“I’m outside my business, outside at my chair. I’ve been here for 20 years,” Kim said.

Reisen, a longtime downtown business advocate in the city who was fully aware what Kim was doing was illegal, stood by his side May 4, saying Kim has the right to make a living and that he has rent to pay in upward of $10,000 a month.

“The Police Department ratted on him and shut him down,” Reisen said. “People that own businesses, we have to survive. People who work for the government, they can survive. … They should let us use our own discretion.”

He said crowds flood stores like Walmart and practice no social distancing, so why can’t small businessowners in downtown open and carefully limit the number of people they allow in, Reisen asked rhetorically.

“I’m going to defy anything the city (of Calexico) wants to do, because I’m a businessman,” Reisen maintained, adding he was going to “stand up about how I feel.”

Reisen’s position was in direct contrast to the opinions of Calexico Mayor Bill Hodge and City Manager David Dale, both of whom said the health and safety of Calexico residents takes precedence over economic concerns.

As the issue of who can open their doors and when is a hot topic of debate between the city of El Centro and the county of Imperial, Calexico officials were to discuss their official position in closed session during the May 6 Calexico City Council meeting.

No official position was taken after the meeting.

Dale acknowledged he is an administrator and not a policymaker, and will do whatever elected officials decide, but his position is toward the wellness of the community that is under siege by COVID-19.

“Calexico has the highest number of COVID-infected people in the county … We have to be diligent with what we do in the community” as far as re-opening our businesses, Dale said following a telephone conference with the county and his Valley-wide counterparts May 1.

As of May 6, Calexico led all Valley cities with 120 total cases of COVID out of a total of 420 cases county-wide.

“Our priority is the health and well-being of Calexico,” Dale said. “We will follow suit with the city of El Centro if it’s determined to be the best course. … We understand El Centro’s position. We share those concerns … (But) we certainly don’t want to jump the gun and see a spike in numbers of cases because we opened too fast.”

“I think El Centro is jumping the gun. They’re a little too eager to open up,” Hodge said May 4. “I’m concerned with our businesses going under and the deep suffering of our local businesses, too, but lives come first.”

County and El Centro officials are to announce some sort of compromise on re-opening businesses in the Valley on May 8, although it’s unclear what that might be other than a timeline. El Centro officials want to see nonessential businesses open with physical-distancing requirements as soon as May 11, while county officials are resistant due to the continued surge in positive COVID cases.

Hodge said if El Centro wins out, he is concerned about pressure from the business community to open.

But, he said, “we can’t allow outside pressure to make our decisions. … Not at the expense of people’s lives.”

For Calexico resident, small business owner and former council member Maritza Hurtado, who has positioned herself of late as a community health champion and has rallied much community support through social media channels, she stands opposed to opening nonessential businesses too soon.

“I have faced many adversities in Calexico as a business owner with extreme challenges with no hope of recovery. I have faced the new and forced transitions of a 30-year company that now has lost its full value and potential,” Hurtado said in written statements to a reporter.

“But I also lost my uncle Joe Hurtado, who was the first coronavirus death in Mexicali only a month ago. He was gone quickly, and even though he had been the president of the largest chamber of commerce of our neighboring city, he did not have a proper burial with his family,” she added.

Meanwhile, Reisen said he plans to maintain his pro-business posture, no matter how unpopular. He even went as far as to take his fellow council members to task May 4.

He said there are “two teachers retired up there (Hodge and Lewis Pacheco). … The assistant city manager, the city manager, all are employees, they get their checks … I don’t work for the city. I just get a little stipend … this hurts guys like me.”

State and local public health officials, he said, “they don’t feel the pain and frustration we have.”

In the north end of the county, where Brawley government officials met May 5 to discuss their position, Mayor Norma Kastner-Jauregui said the Brawley City Council is awaiting to see what compromise is reached May 8.

“We definitely have been in discussions. We care about our city and want to re-open our businesses as soon as possible, but we have to be safe and are waiting for a clear directive from our state and directive from the county of Imperial,” she said. 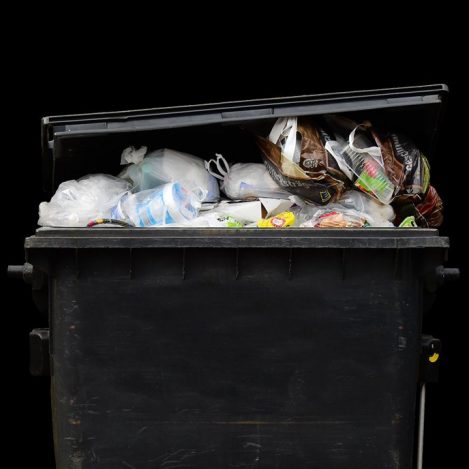