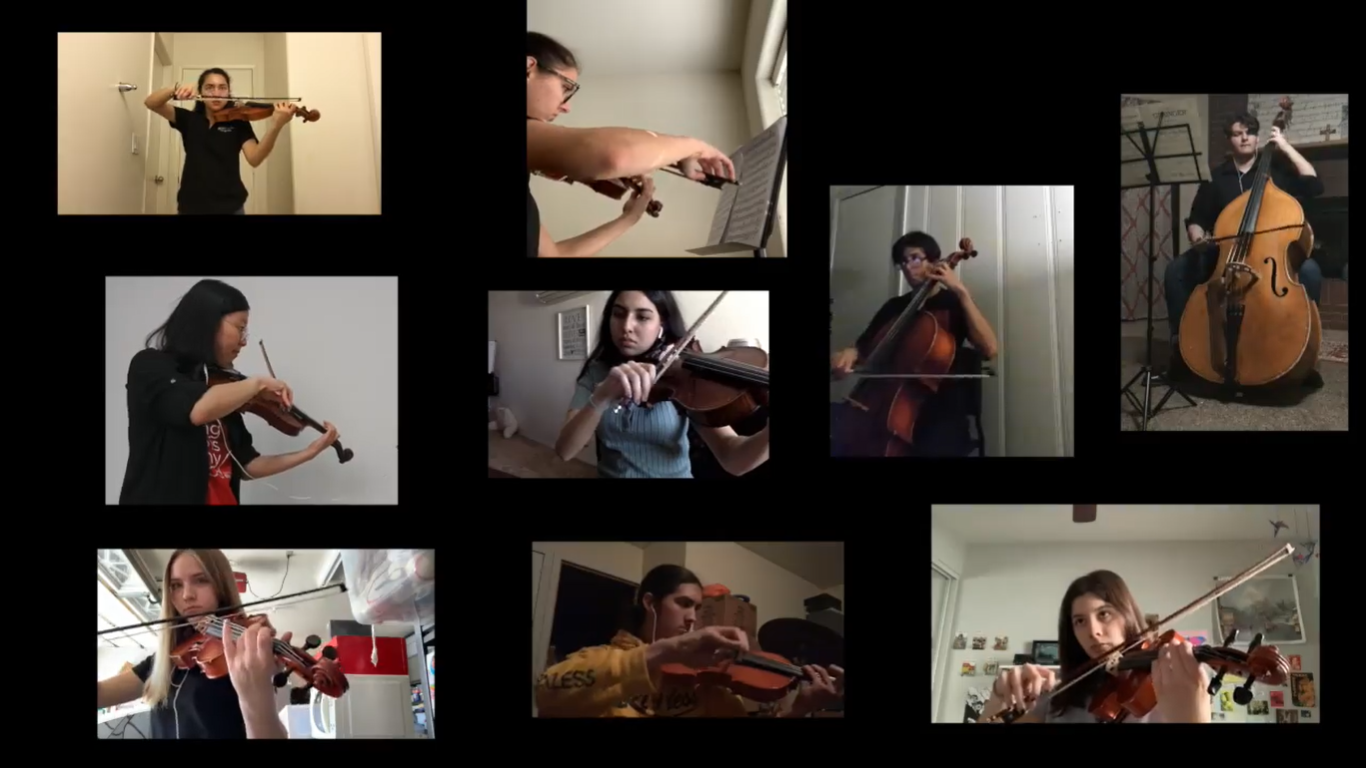 A screen capture from Southwest High School chamber orchestra's "virtual concert" shows students performing the piece, "Molly on the Shore" by Percy Grainger. The parts were recorded by the El Centro orchestra members from their homes, which were then edited and pieced together by conductor and music instructor Matthew Busse. A test piece of sorts that is going viral locally, the video serves as a preview to how Southwest plans to record and release its spring concert later this month amid online classes and social distancing due to the coronavirus pandemic. | COURTESY PHOTO
Home
COVID-19
In COVID-19Featured StoriesRegional News

EL CENTRO — As pop stars, rock bands and other artists from all genres of the music world record concerts and performances from the safety of their homes, Southwest High School instructor Matthew Busse decided he’d put his tech skills to the test and cobble together a “virtual concert” of his orchestra students.

Using the available submissions through Google Classroom that he would normally use to critique technique and offer advice to his chamber orchestra students to improve their playing, he took the current distancing dilemma caused by this pandemic to create something beautiful.

“I’m pretty happy with how it turned out,” Busse said during a May 2 interview. “Kids that see it, know it can be done, and hopefully, that kind of inspires them to be part of this.”

Usually there are 15 members in Southwest High’s chamber orchestra. Busse was only able to get nine of his students to participate with recording themselves playing composer Percy Grainger’s “Molly on the Shore,” an Irish “reel,” or folk dance, written in 1907 for Grainger’s mother and arranged for chamber orchestra around 1920.

“I thought it was pretty cool, especially from the good payoff with the comments of positivity it gets,” said 15-year-old sophomore Aidan Rice, who bows the double bass in the performance.

“It got good feedback,” Aidan said, referencing the 5,000 Facebook Watch views the video had received as of May 4. Busse uploaded the performance April 30.

Aidan’s parents, Sam and Lori Rice, were particularly thrilled to see how it came out. Both have shared it extensively on their social media pages, which is how this newspaper caught wind of the video.

“I was shocked when I saw it on Facebook. I didn’t expect it to come out so good. … I’m really proud (Aidan) did it,” Sam Rice said. Rice knows the work that Busse must have put into the piece; the elder Rice helps run the sound board and do audio engineering during Sunday services at First Christian Church in El Centro.

Choosing the Piece, Creating the Video

“Molly on the Shore” was an obvious selection; the orchestra knew it well, Busse said.

It was part of the students’ repertoire for the March 14 Southern California School Band and Orchestra Association festival that was scheduled to be hosted at Southwest High School before the COVID-19 pandemic shut down all schools and classes about a week before the festival, the 13-year Southwest instructor said.

The pandemic caused the cancellation of all public and private school events in Imperial County.

After physical classes ended and the Central Union High District went to Google Classroom for assignments, Busse noticed the rise in virtual Zoom-based performances where videos from distant locations were being spliced into cohesive concerts, so he thought, “Let me throw my hat into this thing,” he said.

Already armed with some of the technical know-how, Busse said he consulted former colleagues in the Houston, Texas, area and set out to make his own video.

He had to find the right platform and make it look and sound good. He said Zoom is fine for live face-to-face meetings, but not for creating quality-sounding pieces, especially with the individual limitations of each students’ recording conditions.

He said some students have slower internet connections than others, and some record their pieces in garages, bedrooms, bathrooms, each sounding a bit different. So, live was out and pre-recorded was preferred.

Busse took his students’ submissions, imported them into a digital audio workstation first (Logic Pro for Mac, for anyone attempting this at home) and cleaned up the sound, balanced levels and added some reverb so it sounded less like a tinny garage or echoey bathroom and more like a grand symphony hall.

Then, he ran it through video-editing software (Final Cut Pro for Mac) to “do my magic from there,” Busse said.

Cellist Edgar Landa, president of the chamber orchestra and manager of the group’s Instagram account, was pleased with the outcome and its reception on social media.

“I’m glad how Dr. Busse was able to edit it. … I’m glad with how it came out,” said the 18-year-old senior. One of two cellists in the chamber orchestra, Landa was the only cellist to participate in the performance clip.

“It took a lot of work from the students,” he said. “It was difficult.”

Landa said he also shared the “virtual concert” to his personal SnapChat account, where he got about 120 views.

Second violinist Hanna Zia agreed the project was a success.

“I think it was such a great thing that (Busse) did. With concerts coming up and quarantines under way, I think it just came out really great,” said Hanna, a 16-year-old junior.

“I think it was really a good way we were able to connect again. … I haven’t seen my class in a long time,” Hanna said, adding she has “great memories attached to” the video.

Aidan added he thinks Busse’s idea of doing the entire upcoming spring concert like this will be “interesting.”

“I think it will be nice,” Aidan added.

Busse said he was looking for ways to conduct the orchestra’s spring concert. Now, with the tools at hand, he said he has started planning for a virtual version.

Still uncertain about the exact date, Busse said he either wants to have the spring concert video done by May 22 or have the students’ parts uploaded and ready to be put together by then. Either way, he’ll make sure the performance is promoted.

He said the 4-minute, 49-second performance is a great trial run for what would likely be anywhere from a half-hour to an hour-long concert.

“I’m the kind of person that when I try something … I know there’s room for improvement,” Busse said. He’s confident the whole process will be easier the next time around.

“Now, it’s making sure we have the student participation in this,” Busse said.

He doesn’t necessarily want to have participation in the spring concert as part of his class’ grade; rather, Busse wants the students to want to be involved.

“I want to open their eyes” to the possibilities of something like this, he said.

Cellist Landa, for one, thinks it’s a great idea for the spring concert.

“It’s sad that we can’t do it in person, but it’s a good opportunity,” Landa said, adding the reach of social media will provide the chamber orchestra “a big platform.”