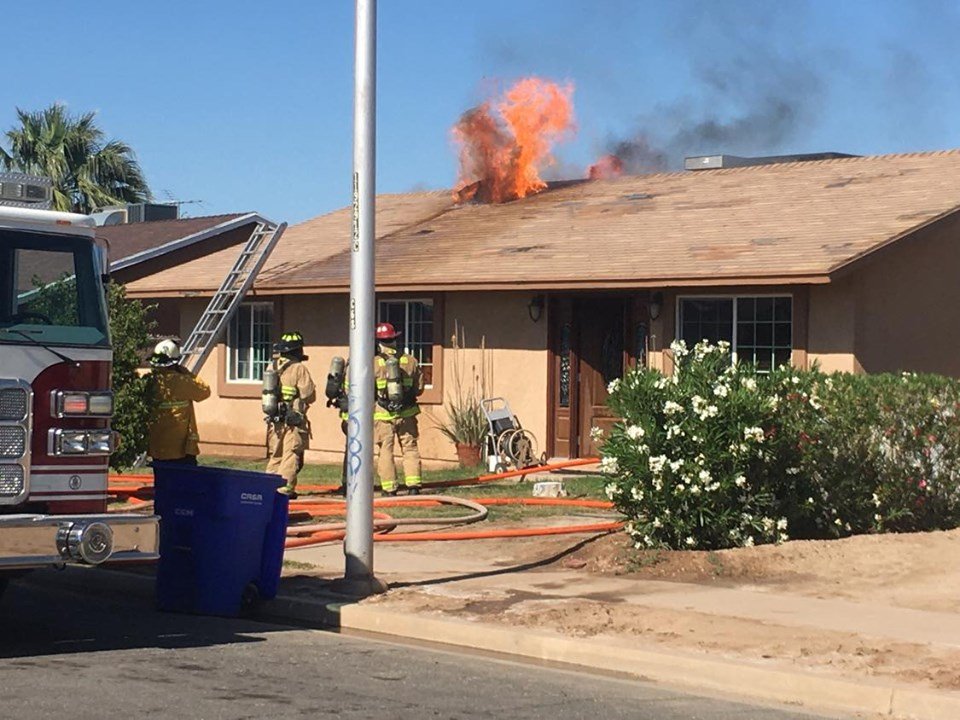 Flames shoot through the top of a house in the 1400 block of North 18th Street on April 23 after crews cut a ventilation hole in the roof. | ELIZABETH VILLA PHOTO
Home
Regional News
In Regional News

A young girl with a puppy in one arm and a cell phone in her other was frantically crying and trying to talk to someone. She was telling them everyone got out and that the El Centro Fire Department was already there.

The temperature at the time was 99 degrees, with no breeze to speak of, and fire crews in heavy and hot turnout gear, were quickly on scene to fight the burning house fire in the 1400 block of N. 18th St.

Dispatched from only a few blocks away, at El Centro’s Fire Station No. 3 on 1910 N. Waterman Ave., firefighters started connecting yellow and orange hoses as soon as an engine was parked in front of the single-family dwelling.

Fighting a fire is a coordinated effort involving many people working quickly under strenuous conditions. Split-second decisions can affect lives and people’s property. On the afternoon of April 23, El Centro fire crews, working with counterparts from other cities, police officers and others, showed what it takes to put out a fire and how it can be such a satisfying profession.

Under the direction of El Centro Battalion Chief Trey Faubion, a crew on the exterior of the house, what Faubion described as a “two-out” or “rapid intervention crew” in a follow-up interview a few days after the April 23 call, does an exterior walk around the house as soon as they arrive.

Ensuring power and gas are shut down at the meters, the crew also coordinates with Southern California Gas Co. and Imperial Irrigation District.

When arriving to the scene, “we do a risk versus gain analysis to determine what we are going to gain against what we are risking with the crew we have on scene,” Faubion said.

These are decisions that must be made in seconds.

In this incident, Faubion said, “They (firefighters) went through front door and were able to stop the growth on inside and push it back to its area of origin which was exterior and then were able to finish it.”

As crews arrive on scene, gray-black smoke billows from the house. Throughout the firefight, various colors of smoke—black, white, smokey white and gray—can be seen.

Different colors of smoke signify different things, Faubion said. White means the fire is knocked out; gray-black means materials are actively burning and being cooled; and gray means the fire is starting to be choked out, he said.

As the firefighters are inside the house and out back, a couple of firefighters used a ladder to go up on the roof. “The two firefighters are hitting the roof, called sounding, to determine best location for ventilation and determine where to cut. We try to conserve as much of the property as we can,” said Faubion.

But wait—as the firefighters are climbing down the ladder, the fire starts up again about 3:59 p.m.

The work was not done yet, as crews continued to water down the house and add a foam spray to ensure the blaze would not restart. That’s when the firefighters knew they could rest.

“The foam is applied to penetrate all surfaces, wood, paper, cloth, couches, etc. It is denser and penetrates better than water and sticks to the surface,” El Centro fire Battalion Chief Cedric Ceseña.

Faubion indicated that all members of the family in the home were relocated.

Now That Imperial County Schools Can Reopen, Plans are Underway

“An ‘after the fire’ form is completed which has information for tenants or property owners. We notify the American Red Cross. Because of COVID-19, (Red Cross) changed their response—done by phone and electronically.”

The fire was controlled within minutes thanks to the quick response and coordination of the firefighters.

As one of the firefighters exited the front door with a portable oxygen tank, he knelt on one knee as if thanking his maker for surviving another day.

At the conclusion of the fire, Ceseña gave a status report: “Single story, single-family home, no injuries as of yet—families and firefighters are safe. Responded from station No. 3, got here quick. Fire still under investigation, but it appears to have started on the outside.”

An active scene, Ceseña continued, “There were 18 firefighters … Received mutual aid from Calexico, county of Imperial, city of Imperial, and Holtville (Holtville was on its way, but we cancelled en route). AMR Ambulance responded for medical support.”

After the fire, crews took no victory laps, there was no cheering, just the satisfaction that the blaze was contained. The firefighters gathered, relaxed and hydrated with their sports drinks and water.  A few gave each other high-fives and fist-bumps for a job well done. “After being in the heart of the fire and successfully putting out the fire, there is an elated feeling that the task was accomplished, that you provided service, you saved someone or saved their property,” Faubion said. 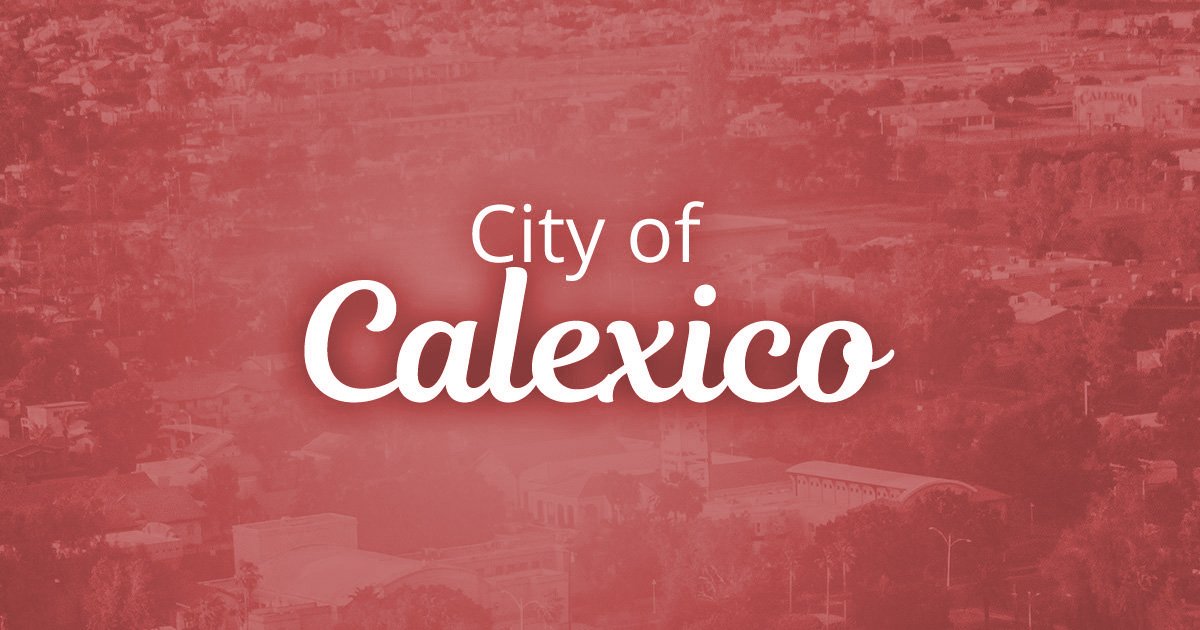