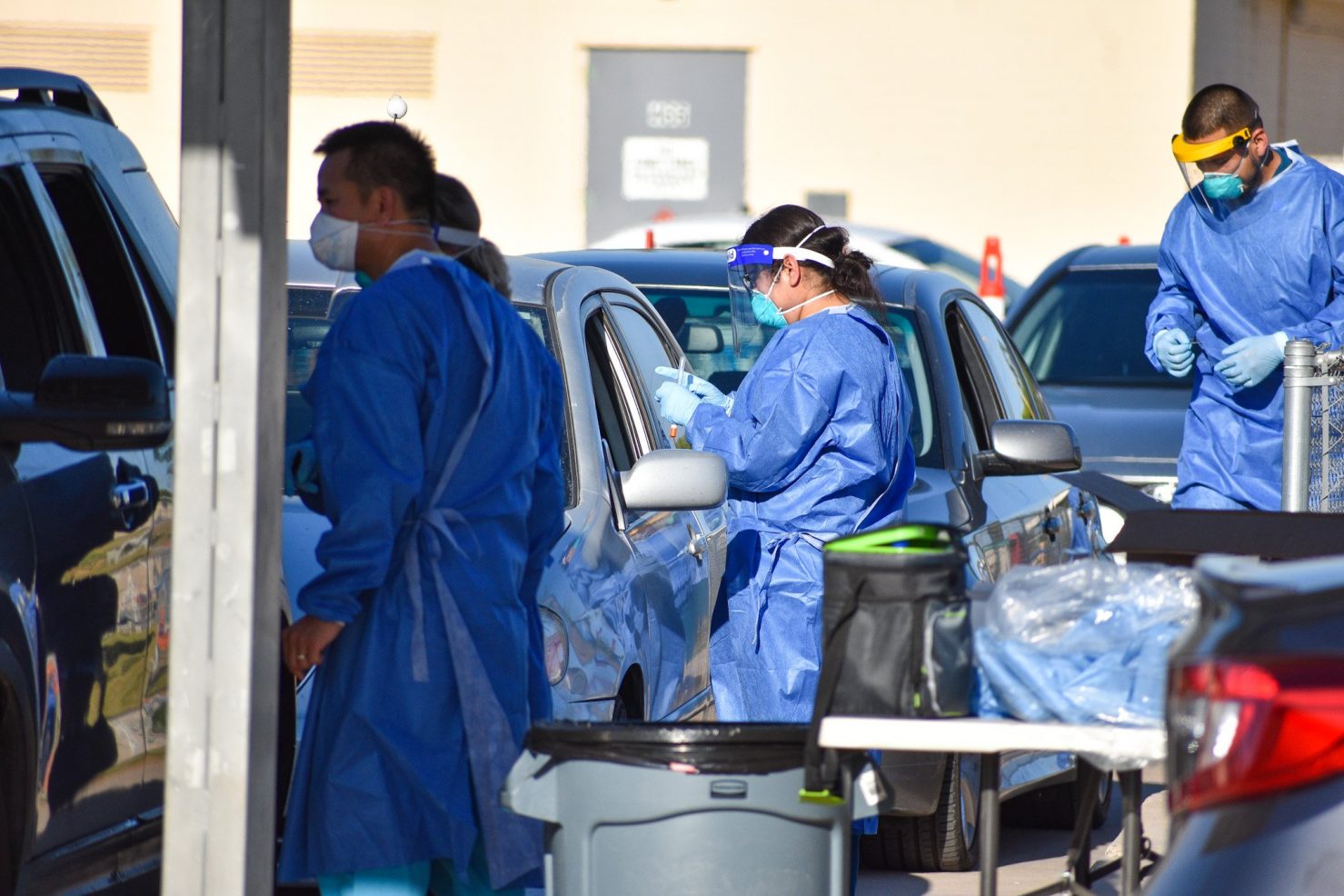 Dr. Tien Tan Vo and his staff conduct screenings and give COVID-19 swab tests during a drive-thru testing clinic in Turning Point Ministry's parking lot on Cedar Avenue in Holtville on the evening of April 28. | CORISSA IBARRA PHOTOS
Home
COVID-19
In COVID-19Regional News

IMPERIAL COUNTY — Imperial County continues to see a surge in the number of confirmed COVID-19-positive cases, a trend that is likely to continue now that the testing capabilities in the county are set to increase by up to 230 or more tests a day through various means.

The developments will not only show a truer picture of the extent of the illness among county residents as it now stands, but moving forward, it will begin to help the Public Health Department build a more accurate epidemiological model that could assist in future re-infections or outbreaks, county Public Health Officer, Dr. Stephen Munday, said this week.

“I’m very happy to be able to share this information,” Munday said April 27. “This is a rainbow for our community.”

Nearly 320 positive cases, some 211 of which are active cases, have been identified in Imperial County through “molecular” confirmatory testing since early March, according to public data updated late April 29.

On April 27, Munday announced a game-changing pair of developments for the county when he revealed that confirmatory testing had begun April 26 at Imperial County Public Health Department’s own lab in El Centro.

He said that would allow private healthcare providers in need of a secondary confirmation to obtain U.S. Food and Drug Administration emergency-use-authorized “molecular” swab-testing kits from the county and have those specimens tested by public health’s lab.

The county will be able to run from 75 to 100 tests a day, running 24 tests at a time in three to four batches daily, Munday said.

Separately, thanks to Gov. Gavin Newsom’s public-private partnership on increasing testing in rural communities, and Munday’s lobbying of state officials, Imperial County has been chosen as a “rural high-impact” area and will get a state-contracted third party to run a testing program for a minimum of two months using the same polymerase chain reaction (PCR) test — the swabs that go through the nose to the pharynx — Public Health will be using.

The company, OptumServe of Eden Prairie, Minn., will be paid for by the state and will begin operations locally in the first week of May, possibly by May 4, at an undisclosed location in Imperial County.

Munday said OptumServe will be able to run about 130 tests a day, and the state could choose to keep the company in Imperial County longer than the initial two months.

Calling the OptumServe system a “self-contained” environment, Munday said healthcare providers will be able to order the testing from the company online, send its patients to the OptumServe lab, where technicians will administer the test, run the results and send those results back to either the patient or provider directly.

Public Health has identified three different locations for the “mobile” lab to operate, but the department is not revealing those locations yet, Munday said. The lab would operate for a set time in one location at an office or some permanent structure, and then break down and move to another permanent structure in another location.

Munday described the one-two punch of increasing local testing capabilities as almost an unlimited increase for tracking COVID infections in the community.

Treating “Community as a Patient”

The immediate impact of Munday’s announcement is important, yes, but the secondary impact is arguably more vital to the possibility of community re-infection or a second wave of the virus, Munday said.

In the event that a vaccine is not produced in short order or a suitable pharmaceutical is not developed to treat COVID-19 along a similar time frame, the increased capability to test more people in Imperial County will allow Public Health to better understand the “epidemiology of the virus” and look at the “community as a patient.”

“I want to know how much disease is out there,” Munday said, adding his job as an epidemiologist is to know how many people got COVID, how severe it was and what is the potential for immunity.

Increased testing is helpful in exploring the “susceptibility in the population, if re-exposed,” he said.

If there is no vaccine or effective drug, Munday said it will be important to determine what did health officials do that helped stem the tide of the infection during the initial pandemic, such as social-distancing orders or the measures now in place.

“That’s one of the problems that we’re having with the serology or antibody testing, because we don’t have all the data yet. The fact that somebody has a positive test may or may not mean they were infected with this virus, and it may or may not mean, if they were infected, that they cannot get it again,” Munday said. “Or if they can’t get it again, whether that’s a short term or a long-term thing. So that’s actually very helpful information because it gives us an idea of how much susceptibility there still is in the population.”

Increased Testing in the Short Term

As much as Munday might be casting an eye down the road, the community is in the thick of the first wave of the pandemic, and increased testing to confirm symptomatic cases is what is needed now, doctors say.

Tyson has been reaching out to county Public Health officials and state Sen. Ben Hueso’s office for weeks to try to get help in finding confirmatory molecular testing supplies he can use for his own Abbott IDNow machine, the same machine being used by the county and El Centro Regional Medical Center, both of whom now have access to the PCR swab kits that Tyson does not.

The only other healthcare provider with access to mass amounts of swab kits has been Dr. Tien Tan Vo, who runs his results through Quest or LabCorp. He said April 29 he has purchased a machine similar to the Abbott model, called GeneXpert, that will allow him to run his PCR/swabs in house soon. He said he is awaiting additional supplies.

The PCR/swab/molecular test is considered the confirmatory test, or a single step, in determining whether a person presently has COVID.

Serologic tests, by definition, can detect that a person has been infected with and developed antibodies to one of any number of types of coronaviruses or even SARS, but they are not the determinant factor in whether a patient has had COVID-19, a specific viral infection and a specific type of coronavirus, according to the U.S. Centers for Disease Control and Prevention.

Tyson said this is the development he’s been waiting for to help his patients seeking treatment through his clinic. Until this, Tyson had been determining that his patients have COVID through the antibody test, chest x-rays and “laying his hands on the patient,” among other diagnostic tools, he said.

“If it walks like a duck and quakes like a duck,” Tyson said during an April 24 interview.

At the time of the previous interview, Tyson said he had performed 2,000 antibody tests and believed that there were up to 120 positive cases of symptomatic COVID patients in Imperial County that were not being counted by the Public Health Department.

Tyson said he continues to run about 100 antibody tests a day, and he hopes that the combination of Public Health and access to other confirmatory testing can accommodate his numbers. Munday said if Public Health gets overwhelmed by testing requests, the department has backup from labs in San Diego.

“We’re all in this together,” Tyson said.

Meanwhile, Dr. Tien Tan Vo continues to increase his PCR testing. So far, he has conducted 800 to 1,000 swab tests in Imperial County. On April 28, Vo expanded his drive-through testing clinic to Holtville. Earlier, he had expanded to Brawley. Vo had primarily been testing patients at his urgent-care clinics in Calexico and El Centro.

He said during an April 24 interview, private lab companies have been supplying him with large amounts of PCR swab kits because of his patient volume and turnover.

With access to more tests, the hospital started to be able to test everyone admitted as of April 24, not just those suspected of having COVID.

The hospital was 60 percent full April 28, and 20 percent of those admitted were COVID positive, Kenney said.

Increasing testing to determine community spread is key, she said, because there is still a bit of uncertainty on how long the incubation period is for COVID. Someone who tests negative today, might test positive in two weeks, maybe even longer, Kenney said.

“It’s as good as the moment it’s taken,” she said during an interview April 28, so there is the need for more testing and people to be re-tested.

Previous
An Unconventional Ceremony for the Graduating Class of 2020 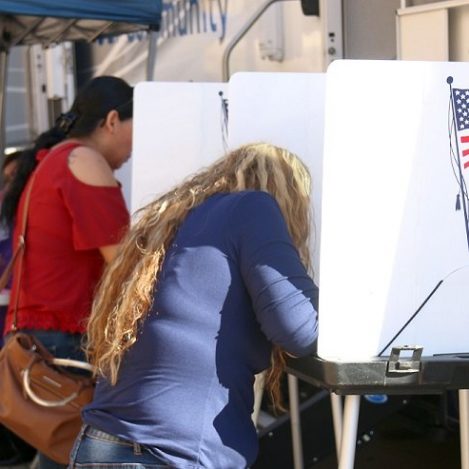 Sec. of State Padilla: Vote by Mail, Vote Early; Ballots to be Counted Up to 17 Days After Election