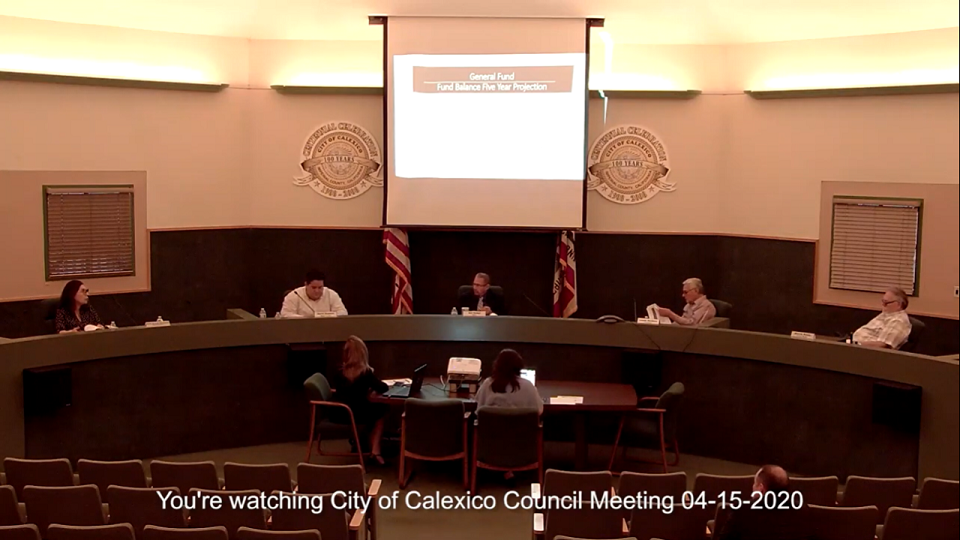 Calexico Finance Director Karla Lobatos (foreground, center left) leads the Calexico City Council through a third-quarter general-fund budget status report during its meeting April 15 in Calexico City Hall council chambers. Despite a loss of nearly $400,000 in program revenues due to coronavirus concerns, the city is still poised to finish the fiscal 2019-2020 year with a nearly $700,000 surplus.
Home
COVID-19
In COVID-19Local News

Not Even COVID Can Keep Down Calexico’s Financial Rebirth

CALEXICO — Although it remains to be seen how residents and merchants will ultimately fare in the wake of the coronavirus pandemic, Calexico City Hall is expected to emerge reasonably whole and in plus-side financial territory, tempered by previous years of budget deficits and ongoing austerity measures.

“We really were uniquely prepared for this,” Calexico City Manager David Dale told the City Council on April 15, following a third-quarter budget status presentation at its regularly scheduled meeting.

Dale was referring to the $377,000 in lost program fees and an anticipated 15-percent hit to second-quarter sales-tax revenue caused by COVID-19 business closures and federal travel restrictions.

“We were lean and mean as it were. That’s why we were able to overcome this,” he said.

With more than 50 total cases of COVID found in Calexico as of April 20, the most of any Imperial County zip code, and the true status of the illness uncertain just south of the border, there was cause to be happy inside council chambers last week.

Saying it’s important “not to overpromise and under deliver,” Mayor Pro Tem David Romero was visibly excited to see the city projected to do so well despite the financial impact from the coronavirus.

Although things could be better, and were headed that way before the pandemic, the city is still expected to finish fiscal 2019-2020, which ends June 30, with a general-fund surplus of $686,897 and building on its reserves, or rainy-day funds.

Calexico Finance Director Karla Lobatos took the council through a detailed third-quarter budget report for fiscal 2019-2020. Despite the sobering news that COVID-related losses are estimated to be $377,187, revised revenues through the third quarter were so strong and had increased so much from the budget that was adopted in late June 2019 (fiscal 2019-2020 started July 1, 2019), that general-fund revenue projections were still nearly $33,000 higher in the adjusted budget following the third quarter that ended April 1.

She explained that through the third quarter, the city was anticipating $410,000 in increased general-fund revenues that positively offset the COVID losses.

This news comes even as overall expenditures by the city increased through the third quarter as well.

Breaking it down for the council, Lobatos said some of the $377,187 in projected program-revenue losses affected by COVID include $165,900 in estimated fees generated by citations and parking tickets from the Police Department; $80,000 in cannabis tax revenues; $50,000 in business license fees; $45,000 in hotel taxes; and $25,000 in fire inspection fees, among other sources.

However, she said, there was $410,000 in new revenue that came mostly through 2019 fourth-quarter calendar-year sales taxes to the tune of $150,000, a surge that city officials did not anticipate. That was bolstered by $100,000 in increased property-tax revenue/money made from refinancing bonds; $60,000 in rent paid to the city from the Mexican consulate and other rents and concessions; and $100,000 in Measure H funding transferred to the general fund.

Lobatos said even with the surplus, the city must work hard to maintain its expenses and be cautious.

The third-quarter report segued into discussions about the city’s five-year general-fund projections, something that has not been done before under this current management structure and council.

Starting in fiscal 2021-2022 through fiscal 2024-2025, Lobatos said a “very conservative” estimate anticipates 2-percent growth in the city each year.

The purpose of the projection is for “long-term planning” to “pay down long-term debt” and deal with escalating costs of “unfunded liabilities” while simultaneously building reserves.

After fiscal 2020-2021, the city will have paid off its debt to the Joint Powers Insurance Authority, which has caused the city to self-insure at a higher cost. After that, the rest of the city’s debt will come in the form of retiree medical benefits, retiree medical unfunded liability, and the backbreaker, the increasing costs of the California Public Employees’ Retirement System, or CalPERS.

At the same time, Lobatos showed the council that through very conservative estimates the city can reach a target of $1.5 million in operational reserves, the equivalent of about one month of keeping afloat with no revenue, by setting aside 5 percent to 7 percent in reserves through 2024-2025.

Assistant City Manager Miguel Figueroa, who is tasked with economic development for the city, among his many hats, lauded Lobatos on her “humble and conservative projections,” adding that for all the good news delivered April 15, the numbers and long-term financial projections did not even reflect some of the benefits of economic development projects the city has in the works.

Figueroa told the council that more revenue will be added to the projections soon as “a number of projects, some in the planning stage, some in the implementation stage,” bear fruit.

He added this was the direction the council wanted to head in, and it’s happening, despite the setback from the COVID pandemic.

The council unanimously approved a budget amendment resolution that reflected the real and projected changes to the adjusted budget.

In other city business, the council also unanimously approved the receipt of audited financial statements for fiscal 2018-2019, which came six months faster than the audit of finances for fiscal 2017-2018. City officials cited that as another example of progress.

In 2016, the city was on the verge of bankruptcy. With a general-fund balance of negative-$4 million, the city borrowed against its own water enterprise fund to stay afloat and negotiated salary and benefits reductions with employee unions, and worked with some of the lowest staffing levels in the city in more than a decade. 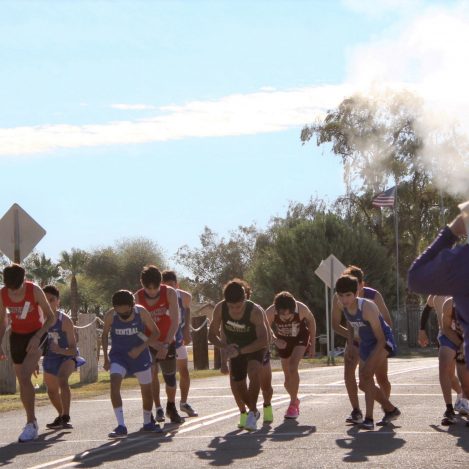