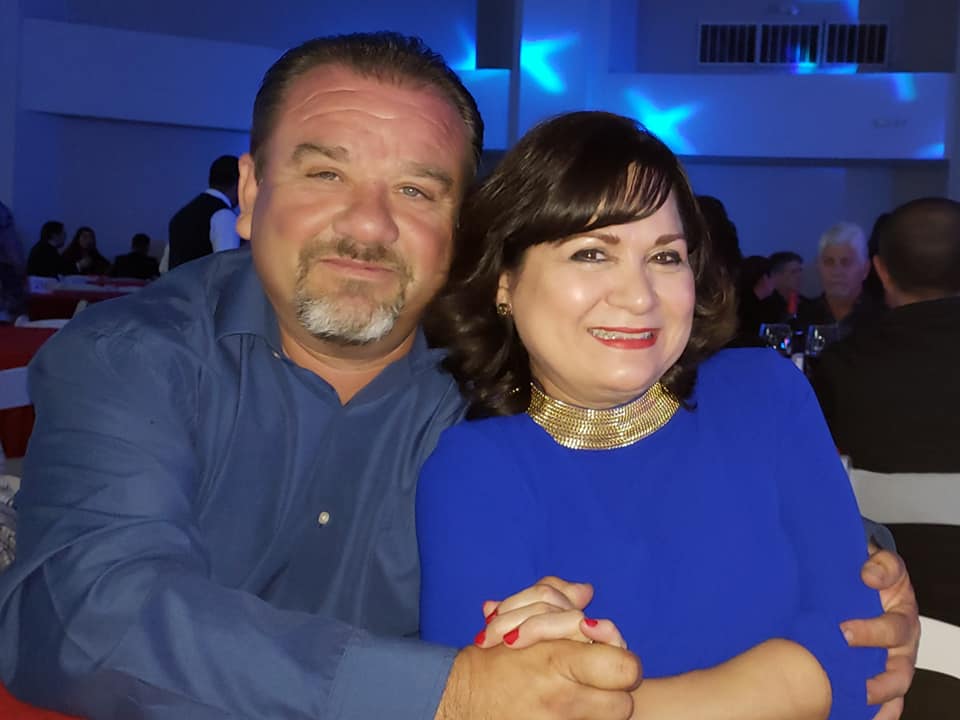 Enrique Verdugo, 51, and Paty Hurtado, 59, of Calexico, have been married for 28 years. Paty is recovering from COVID-19. She and Enrique have been in isolation in their home since around March 20. | COURTESY PHOTO
Home
COVID-19
In COVID-19Featured StoriesLocal News

CALEXICO — Paty Hurtado is on the mend. She’s got her easy laugh and her bubbly spirit back, but she’s still a little weakened and has a lingering cough being treated with a nebulizer.

Still considered one of the 110 or so “active cases” of coronavirus in Imperial County, Hurtado is under a 24-hour-a-day, seven-day-a-week home isolation order from the county “until further notice,” confined to her Calexico home with her husband of 28 years, Enrique Verdugo.

Soon, however, the 59-year-old musician and entertainer hopes she will be cleared by her treating physician, Dr. Tien Tan Vo, in about another week, so that she can join the nearly 50 other Imperial County residents who have been moved to the “recovered” side of the local ledger tracking COVID-19 infections.

Although the county did not officially confine Paty to her home until April 1, she basically hasn’t ventured outdoors since March 20 (except to be tested), so she’s looking forward to her first face-to-face appointment with Vo at his office.

“If you ask me how I feel from one to 10, I feel about an eight and a half,” Paty said in Spanish on April 17, through her husband, who translated during a cellphone interview with Paty.

“I get tired easier. I can’t catch my breath like before,” she said. Overall, though, she’s feeling “muy bien.”

That’s a far cry from where Paty was around March 30 and 31, when she felt like she was on death’s doorstep.

There were the unrelenting fevers, the cough, the body pain and blinding headaches, the labored breathing, and even the simultaneous vomiting and diarrhea that she says came within hours of starting her course of treatment that included high-powered antibiotics, zinc and the use of the controversial antimalarial medication, hydroxychloroquine.

“I thought I was going to die,” she said. “I asked God to take my hand and not let go.”

Speaking through Enrique, he stopped the conversation for a moment.

“We were scared. I was scared, she was scared. She thought she was going to die.”

The interview went silent for about 30 seconds. It was clear that 51-year-old Enrique was overcome with emotion, fighting through tears.

“I felt like I was losing her,” he said softly, his voice breaking. “I love this woman.”

“It’s no joke. This (COVID) is no joke. We don’t want people to die,” Paty said. “Try to take care of each other. Take care of yourselves. This is serious, this is real.”

It has been through her Facebook page — like so many others who have been open about their coronavirus diagnoses — where she started to document her descent and some of the steps she has since taken to regain her health. More than a month since she sang publicly, Paty even recorded a video of herself singing and playing guitar the morning of April 17 to fulfill a friend’s request and let her followers know she is getting stronger by the day.

Clearly Paty is not someone to shy away from attention, but she is also quite sincere and cares deeply for others. As a performer around town, one of her main jobs is bringing joy to the senior citizens of Calexico through her karaoke-style shows for the city’s recreation department, where she dresses up, plays her various instruments and sings, and coaxes others to shine under the spotlight as well.

Her platform on social media has led to requests for interviews from traditional media, which she and Enrique kindly oblige, hoping that people will take heed about the dangers of not staying home, not practicing social distancing and generally not listening to what public health and government officials have been saying all along.

“People just don’t believe. That’s why I decided to talk to the media,” Paty said. “People need to stay home; people need to be safe.”

Paty has been incredibly open about COVID’s fatal effects on her loved ones, further revealing the missteps made in her own family to spread the virus from one country to another.

Her older brother, Jose Manuel, age 70, was confirmed to have tested positive to COVID-19 just about four hours before he died March 30 (the same time Paty felt her worst) in a Mexicali hospital from lung failure and a massive heart attack. He was already suffering from diabetes and high-blood pressure, severe health conditions on their own. Paty cannot be certain, but she doesn’t think his death certificate listed COVID as the cause; she thinks the heart attack is what is listed on the record.

It’s also unclear for how long he had the virus and how it was spread. What is for certain, Paty said, is her elder sister, Alicia, 62, of Indio, somehow played a part in the transmission.

Alicia traveled to Mexicali to visit family and see Jose Manuel on March 16. The next day, as she returned to the U.S., she stopped off at Paty’s Calexico home to chat and have coffee. Paty said Alicia was already feeling under the weather that morning and just wanted to return to Indio.

“She was complaining about headaches and bone aches. She wanted to go home,” Paty said. Alicia eventually tested positive for COVID and is also presently recovering.

Enrique said the sisters greeted each other and said their goodbyes with plenty of hugs and kisses, as they were accustomed to doing.

Paty was never hospitalized, so it’s not entirely clear whether she was close to death, as she and Enrique believed.

After several days of fever, Enrique called 911 on March 25, when Calexico paramedics arrived and took her vital signs. Fearing a trip to El Centro Regional Medical Center might expose her to people infected with coronavirus, Paty and Enrique decided to seek out testing at Vo’s clinic the next day.

Paty went to Vo on March 26. He suspected she had COVID, swab-tested her and sent her home pending confirmation of the results.

“She was bedbound. Can’t control fever, can’t control cough, difficulty with breath,” Vo said during an April 16 interview about his initial consultation with Paty.

By the time Vo tested Paty, got her results back and spoke to her and Enrique again March 30 on a “telehealth” video call from her home, Vo said, “She couldn’t talk … she was very weak.”

“If I hadn’t treated her soon, she probably would have gone to the hospital to intubate her,” Vo said, where she likely would have been placed on a ventilator.

The timeline of Paty’s visit to Vo, when she was tested, confirmed positive, treated and eventually ordered quarantined by the county shows the flaws and gaps in communication that can occur, problems that could be unique to Paty, or simply unique to an ever-evolving pandemic and the ever-evolving response to it.

Enrique said they were told the results of Vo’s March 26 test would come back in two to four days.

Vo said the results came back on March 30, but Enrique was told the results actually came back a few days earlier, and that for some reason, Vo’s office did not make contact with the Verdugos until late in the day March 30, where the doctor spoke to them through telehealth.

“(Vo) got excited and worried at the same time,” Enrique said of talking to the physician. “He said, ‘Go to the pharmacy and get the medicine quick.’”

Paty began the treatment that night. Vo tested Enrique on March 31, because of his exposure to Paty, not due to any symptoms. Enrique has tested negative for the virus. Vo has had them sleeping in separate rooms since March 26.

The physical symptoms took their toll on Paty. Still not 100 percent, she’s weakened with light breathing problems. Vo has spoken to her through telehealth once a week during her recovery.

After making it through the peak of the illness, the early part of April was filled with good days and bad days. Her fevers finally broke for good April 3, she said.

Experiencing chills and various body aches, Enrique spent several days in a row massaging her with vapor rub before she would go to sleep for the night.

“Even though I was sick, I took a shower every day,” Paty joked.

To regain some of her stamina, Vo prescribed a take-it-easy regimen on walking around the house for exercise, she said.

Enrique brought in an old treadmill from the garage and set it up in the breakfast nook area of the kitchen on April 13, where the first day she did 15 minutes of light walking. The next day she went for a half hour and immediately paid for it.

“I felt like I had asthma symptoms. There was pressure in my chest, and I felt dizzy. I overdid it,” she said.

The next visit she has with Vo, which is supposed to be face to face, Paty promised “to sing to him,” Enrique said.

Mentally and emotionally, Enrique has been there through the whole ordeal, as Paty’s rock.

“We’re always trying to look out for each other … this really hit us hard, and then after we heard about her brother (dying March 30) … it hit home,” Enrique said.

Married by the court in Imperial County on Oct. 15, 1991, the devout Catholics were wed by the Church on April 4, 1992. They lived separate that entire time; Paty was in Mexicali with her large family of brothers and sisters, and Enrique worked and saved money in Las Vegas, where the couple lived from 1992 to 2002, before moving to Calexico.

Enrique is a preventative maintenance technician working on tractors for RDO Equipment in Imperial, and Paty has been involved in music in some way since she was a young girl, performing in choirs and bands for decades.

Part of her healing process has been daily contact with family, with whom she has always had a close relationship.

The Verdugos’ two grown sons (and their wives and girlfriends) contact their mother as often as possible: phone calls every other day, text messages every day.

Carlos Jonathan, 33, is a U.S. Border Patrol agent in Tucson, Arizona, and Christian Enrique, 25, takes care of the elderly in a private home in Rancho Cucamonga.

Since becoming ill, Paty has had daily meet-ups with her four sisters on Facebook Connect between 6:30 and 7 p.m. without fail, to say the Rosary and to chat and catch up on the day’s events.

“The family is more united than ever,” Enrique said. And that’s saying something, he added, because Paty’s side has always been close, with 50-person “family reunions like you wouldn’t believe.”

“If you do love your family, don’t go out,” Paty said. “Stay home, don’t expose them. You could weaken the family. Always take care of the family.”

(UPDATE: This interview with Paty Hurtado was conducted April 17 as she was improving in health from her battle with COVID-19. Paty reported April 22 that she had a relapse on April 19, with fever and more coughing and was given a second course of COVID treatment by Dr. Vo. Hurtado said she still had a cough April 22, but no more fevers.)

UPDATE: The interview with Paty Hurtado was conducted April 17 as she was improving. Paty reported April 22 that she had a relapse on April 19, with fever and more coughing and was given a second course of COVID treatment by Dr. Vo. Hurtado said she still had a cough April 22, but no more fevers.

Previous
Minor Fire at ECRMC Contained; No One Injured 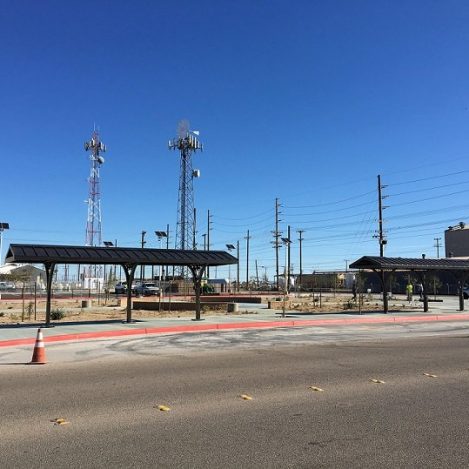