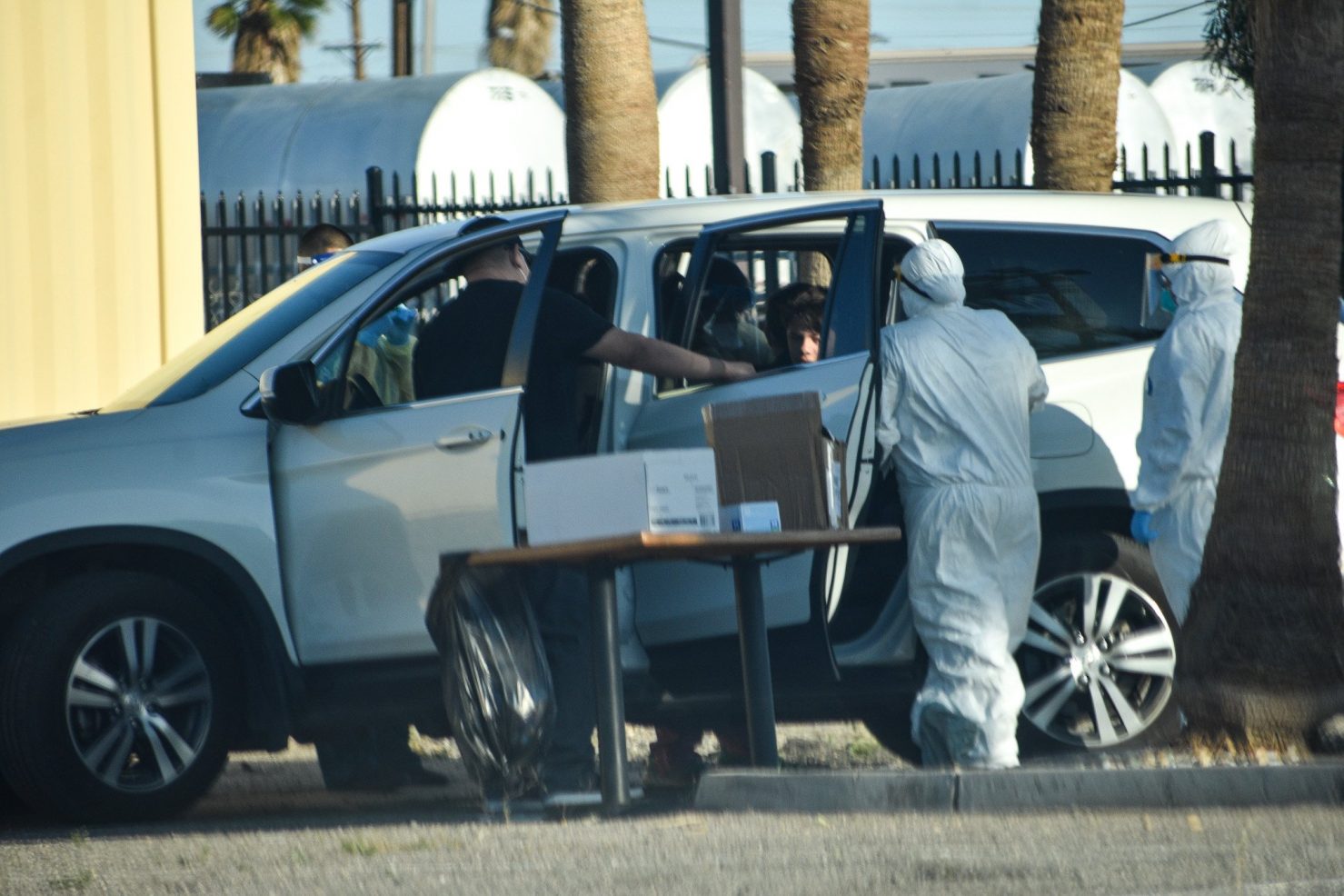 Dr. Tien Vo and his staff, all dressed from head to toe in protective equipment, conduct drive-through COVID-19 testing at Vo's urgent-care center at 222 E. Cole Blvd. in Calexico on April 14. Vo has been conducting testing in the Imperial Valley since March 23, one of the first private healthcare providers to do so in the region. | CORISSA IBARRA PHOTO
Home
COVID-19
In COVID-19Featured StoriesRegional News

CALEXICO — In what has essentially been a six-week battle with coronavirus since the first local case presented itself to health officials in early March, Imperial County saw a couple major developments in COVID-19 cases this week.

First, the number of positive cases passed the centennial mark April 13. Then, there was a 17-case surge from one day to the next April 14. Lastly, albeit for one day early in the week, Calexico continued to lead the county in total numbers of those infected since public health officials began tracking cases by zip code.

As of April 15, Imperial County had 127 total positive cases, 84 of which were active, with 40 patients having made complete recoveries. With three deaths recorded, the numbers of people tested climbed to 1,016.

It would seem to go without saying that the more people there are in terms of population density, the more positive cases there will be, although county public health officials have not specifically addressed the causes or roots of case distribution in the Valley.

“Because the number of cases still remains relatively small, we are unable to make a true determination at this time,” stated county Public Health Department Epidemiologist Paula Kriner in an emailed statement. “However, population density has generally been found as one of the key factors in the way in which cases spread.”

Why so many cases in Calexico, Valley?

Maybe it is a reasonable assumption that Calexico has led with the most positive COVID cases much of the time.

Dr. Tien Vo certainly believes that is one factor. Vo, an internal medicine specialist who operates clinics in Calexico and El Centro, has performed at least 500 polymerase chain reaction, or PCR, swab tests on patients in the Valley since March 23.

In general, Vo said he believes the ratios of people infected to population are high in Imperial County compared to areas like San Diego County, but he thinks that has roots in several factors, including proximity to the border, especially for Calexico, and is a product of close contact.

“It’s not hard to understand. It’s because of exposure,” Vo said April 14 after a drive-through testing clinic at his Calexico location.

Vo said he has many cases — at least four or five entire families — under his care in which one member became infected and spread it to four or five other members of the family living under the same roof.

“Education is key,” Vo said. “People need to listen and stay home … The county did the right thing to require masks.”

In addition to conducting what arguably could be the most tests among local healthcare providers, Vo has also given away 7,000 free masks to patients and others.

One of the reasons Vo has tested so many people is, he’s not only adhering to CDC guidelines of testing those 65 and older, those with high-risk co-morbidities and those who present respiratory symptoms, he also factors in “exposure” of those tested to other COVID-positive patients, which he said allows him some latitude on who gets tested.

Recently, in his Calexico clinic, he said he has tested 50 Border Patrol agents, five or six of whom have come back positive, as well as one emergency room doctor from Mexicali, who tested positive as well.

Calexico City Council Member Rosie Fernandez, who has been semi-retired since last year after a 40-year career in healthcare, doesn’t think conditions are any more serious in Calexico than anywhere else. Fernandez has worked as a registered nurse at El Centro Regional Medical Center and in home health.

“The border affects it somewhat, but it’s all over the Valley. We have a lot of healthcare workers that live in Calexico that work in different places,” Fernandez said April 15. She said they could be getting exposed at their jobs and bringing it back to the city.

She doesn’t believe it’s an issue of healthcare access. Although Calexico does not have a hospital, Fernandez said she thinks there is plenty of access to urgent-care centers and other medical services in the community.

With the high number of Hispanic/Latino residents in Imperial County in general and Calexico in particular, Vo said culture is a strong factor in the rate of transmission of COVID-19.

“The only problem with the community of Calexico is, people don’t listen,” Vo said. “Caucasians (non-Hispanic whites) and Asian people, they get home and hide. The Hispanic culture is not afraid.”

He continued: “They want to go with their friends and families. They want to go to Mexicali to party. A lot of people are busy in the streets in Calexico. People need to listen and stay home.”

Fernandez agreed with Vo to some extent.

“The Mexican culture is hugs and kisses,” said the council member. “We tend to not get scared of certain things until it hits home.”

Still, Fernandez said there are plenty of elderly Hispanic residents who are afraid to catch the coronavirus, and they are staying indoors.

“It’s all about the individual,” Fernandez added.

Self-proclaimed social activist and former Calexico City Council member and Mayor Maritza Hurtado partly agrees with Vo, too, but maintains that is too simple of a diagnosis.

“He’s right, but he’s not right,” Hurtado said during an interview April 14. “Vo is not from Calexico.”

The high number of cases in her opinion have to do with Mexicali’s influence on the population and how government and agencies kowtow to the benefits of a highly transient population, and to the lack of true “healthcare champions in the community,” Hurtado said.

True Calexico residents are to be celebrated, she said. Hurtado said just go into the neighborhoods in the city, and one can see how quiet it is, that people are staying home, compared to the still-going buzz of people in the downtown.

“In the residential areas of Calexico, we’re doing what we’re supposed to be doing; following orders.”

The System Has Failed Calexico

Hurtado has taken to social media, specifically her Facebook page and other pages she moderates, to say that the healthcare system in the city has failed the community at large.

Recently, she’s been vocal to say Clinicas De Salud Del Pueblo, by closing its Calexico clinic amid reports that four workers were infected with COVID, and the lack of pro-active programs to help Calexicans by the city’s Heffernan Memorial Healthcare District have contributed to the city’s high numbers of residents threatened by coronavirus.

“At this point, Clinicas and Heffernan are failing Calexico,” she said.

Hurtado claims Clinicas draws Mexicali residents to the city to seek services in Calexico and that Heffernan has all but stopped funding many pro-active programs that help certain sectors of Calexico, like seniors.

What’s more, she said, Mexicali’s influence on Calexico has always hurt its ability to have a viable hospital in the city.

Heffernan board President Rodolfo Valdez refuses to respond to criticisms made against the district on social media, saying there is a time and place for such discussion, like at public meetings of the healthcare board.

Still, Valdez said April 15 his board has done much to provide Personal Protective Equipment like gloves and masks to first-responders in the city, healthcare providers who have requested them, and he said very soon Heffernan will start to distribute hundreds of masks and gloves to the 10 to 12 senior apartment complexes throughout the city.

Council member Fernandez sees some of Hurtado’s points. “Calexico has always been deprived of a hospital and healthcare. (But) I kind of think she’s wrong to say Heffernan’s not doing it, because their hands are tied … in what they can do.”

Fernandez, a former Heffernan board member, is referring to policies on how Heffernan is allowed to spend its funding according to a county agency, the Local Area Formation Commission, that threatened to disband the district a couple of years ago. 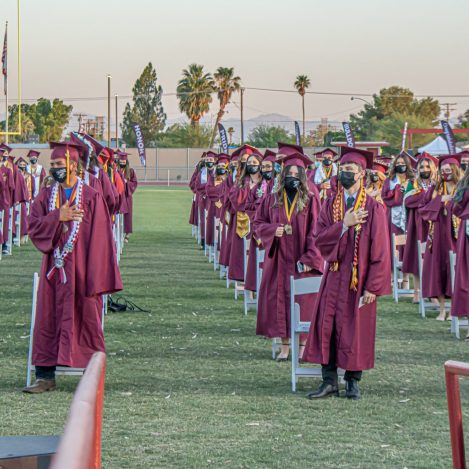