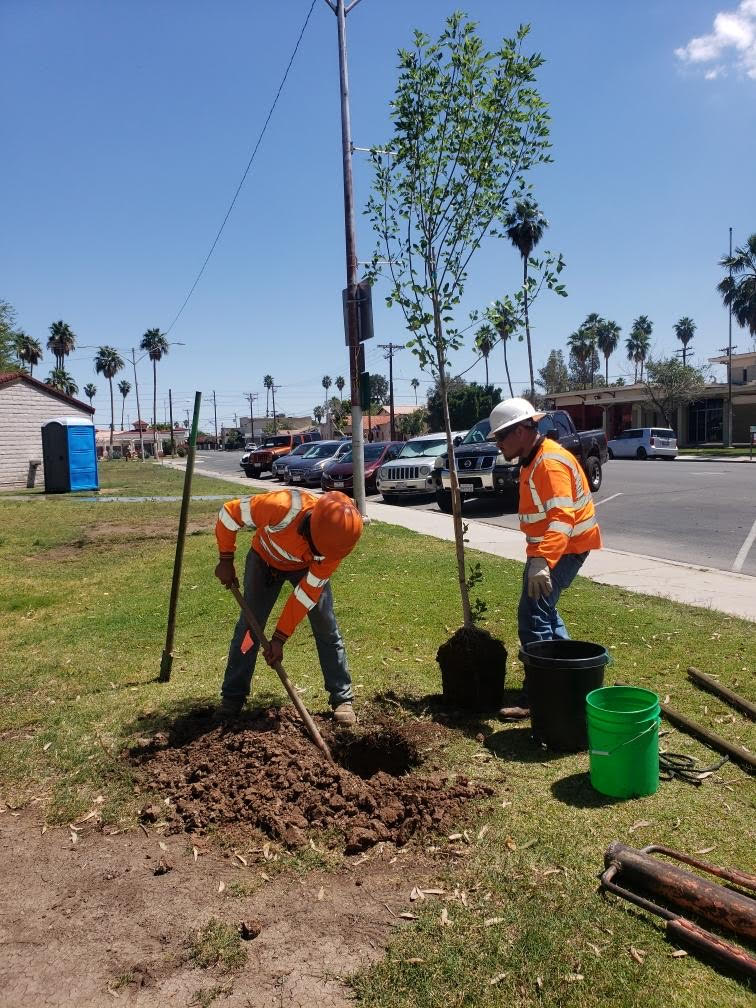 A pair of workers with West Coast Arborists of San Diego plant a tree in Rockwood Plaza on April 9 as part of a project to plant hundreds of saplings in the city over the last two weeks at various parks and retention basins around Calexico. As part of a $665,000 Imperial Valley Urban Forest grant with the city of El Centro and other county cities, Calexico received 350 free trees. Contractors working through the grant planted eight weeping willows and three shamal ash trees at Rockwood Plaza. | PHOTO COURTESY OF CALEXICO CITY MANAGER DAVID DALE
Home
Featured Stories
In Featured StoriesLocal News

Calexico Rolling in Green; From Trees, That is

CALEXICO — In Calexico, such exotic names as “Sweet Acacia” and “Chinese Pistache” might be confused for the strains of cannabis to be sold out of the various pot shops in the city in the coming months, but, alas, they are the names of desert-acclimated and drought-tolerant trees.

Hundreds of them, scattered throughout the city’s parks system and planted there the past two weeks by professional tree guys.

At parks. In retention basins. Among common green areas along major city streets and neighborhood arterials.

Some 350 trees in all have been provided to the city through a $665,000 grant from Cal Fire, through an Imperial Valley Urban Forest initiative authored through the city of El Centro in 2017 and shared with the communities of Calexico, Brawley, Imperial, and Holtville.

A consultant with El Centro wrote the grant for the 1,400 trees, which were split up evenly between the participating cities. Calexico got its trees last, which arrived in the city along with professional planting crews on April 6. The planting was expected to wrap up by the end of this week.

“These trees help us beautify our parks and provide shading for our park users. In some of our parks, trees have died for various reasons. Now we can replenish our trees with this grant,” said Calexico Public Works Manager Liliana Falomir, whose department is coordinating the delivery and planting of the saplings by contractor West Coast Arborists of San Diego.

Calexico Mayor Bill Hodge said having the trees was a “beautiful” experience for the city.

“It’s beautiful for many reasons: aesthetically, health-wise, oxygen-wise, it’s better for our environment,” Hodge said during an interview April 11. “It’s symbolic of good collaboration between one city and another.”

Falomir and Hodge acknowledged the plan all along was to celebrate the trees in an Earth Day event later in the month, but due to social distancing and a ban on public gatherings amid the coronavirus pandemic, any event will be scheduled later in the year.

Hodge said he wanted to invite the mayor of Mexicali to celebrate both the tree planting and for re-signing a “sister city” agreement between Calexico and Mexicali.

“One area I wanted to focus on (with Mexicali) was environment. We were going to try to work together on something like planting trees,” Hodge said.

The author of the Imperial Valley Urban Forest grant was Kalli Legakes, a consultant contracting with the city of El Centro on the project and daughter of longtime El Centro city parks supervisor, Chris Legakes.

Kalli said the overall goals of the grant was to provide education to the public to be “good tree stewards,” but also to be a research-based grant that determines whether the proliferation of trees in a desert community can reduce greenhouse gases, which cause climate change.

Greenhouse gases include carbon dioxide, a principal food source along with water for trees. During photosynthesis, trees convert sunlight, water and carbon dioxide to grow, expelling oxygen as a main waste product. More oxygen in the environment, in theory, replaces the greenhouse gases.

Legakes said she is involved in the data collection for the grant, information that is and will be posted to an Imperial Valley Urban Forest website, www.ivurbanforest.com, which she said was down temporarily.

None of this is costing the city of Calexico a dime, other than the city had to make a three-year commitment to keep the trees alive through irrigation and the tree-loving attention of city parks staff, Falomir said.

Legakes said it’s a great deal for participating cities; the value of planting one tree with a professional company like West Coast Arborists can cost as much as $200 per tree. “This grant is going to help us for shading, to reduce energy consumption, to help with air pollution,” Falomir said. “This is a good grant.”

Previous
COVID Cases Surge Past the Century Mark, to 127; Concentrate in Density Centers 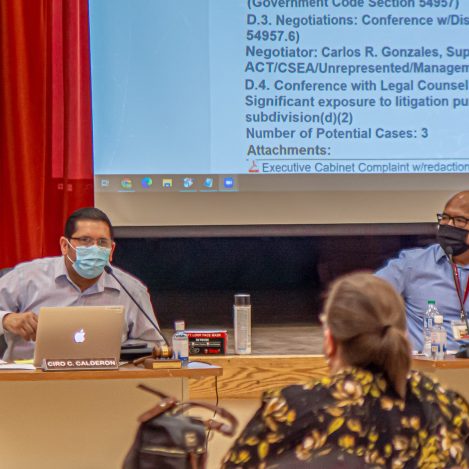