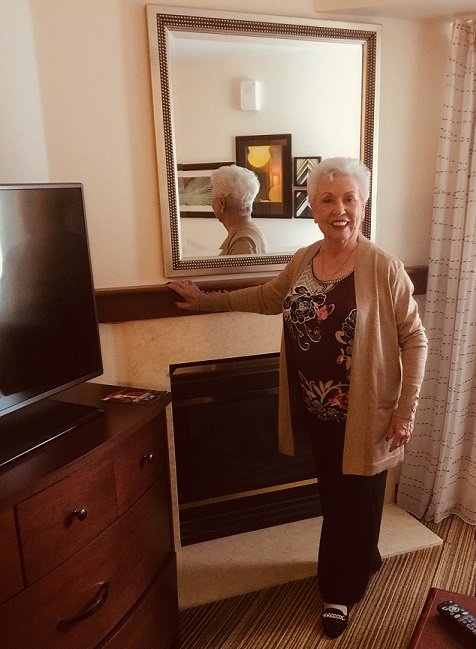 Marion Gay Martinez Rockwell, 88, of El Centro, poses for a photo in her home. Martinez Rockwell was a Calexico institution for decades, where she owned and operated MGM Dance Studios out of her Preston Avenue home in the border city for 37 years. | PHOTO COURTESY OF MARTINEZ FAMILY
Home
Featured Stories
In Featured StoriesLocal News

Long since retired, the 88-year-old Martinez Rockwell, who recently celebrated her birthday March 31, is still teaching and performing today, now for the lively retirees living at Desert Trails RV Park in El Centro, where she instructs others in the art of ballroom dance.

Recently, the former professional dancer sat down to discuss her life and legacy, one in which she lived many girls’ dreams of becoming a famous performer, but also raised a family of five talented children and lived a fulfilling life passing on her gifts to others.

“I started teaching local kids in my garage about 1970. It started when the kids discovered a trunk with old costumes. They started playing with them. The neighbor, Joey Moreno, and (her youngest daughter) Patty (Gay Martinez, now Patricia Beach Avalos) took to dancing,” Martinez Rockwell said.

“And then more neighborhood kids started coming. Ms. Moreno said I should start paying you. Before you know it, we had a studio and it grew. Our first recital was at Jefferson Elementary School.”

Over three decades, Martinez Rockwell, best known around the Calexico community as MGM or simply, Marion, before remarrying several years back, the former professional taught more than 300 students from her Preston Avenue home before expanding to other studios in Calexico, El Centro and Holtville.

To get there, she put in years of dedication and hard work.

A Dream Realized … and Earned

Marion’s successes were the result of much discipline, rehearsing as a young girl in Connecticut and later as a teenager in Hollywood.

She attributes her looks to her mother and her artistic talent to her father.

“I wanted to be in show biz all my life, to dance and put on shows, that was my true calling,” she continued, giving thanks to her teachers who very instrumental in her life.

My mother’s gift is dance, being an incredible natural, said Catherine Bogart-Martinez, Marion’s eldest daughter. “That is what brings her to life, being on stage and entertaining. When she gets on stage, she ignites.”

Marion had five children with her late husband, David Martinez, who was another fixture around Calexico. In addition to Catherine and Patricia, there are sons Anthony Martinez and Steven Van Martinez, and son William Martinez, who died some years ago.

Born in 1932 in Hartford, Connecticut, Marion started dancing when she was 6 years old and attended a dance studio at a very young age. Her family moved to Hollywood when she was 13, and she attended Hollywood High School where she continued in performing arts. Marion recalls famous comedian Carol Burnett being in her chorus class, before she was famous, of course.

After graduating from high school at age 17-18, Marion traveled with a dance company from Connecticut to different parts of the world, with her first show being in Hawaii. She would usually perform a solo and then join another performance with a line of girls. Each dancer would make their own costumes, she said.

Thereafter, Marion tells how she performed in Chicago and Milwaukee with a dance team in night clubs. She came back to California and performed with Hollywood Scandals and did solo tap dancing and then danced with a chorus line.

Around the age of 18, going on 19, she was on a ship with Bob Hope as a part of a USO tour where they entertained the troops during the Korean War. She’s been to Tokyo, Japan, Hawaii, Philippine Islands, and many other locations.

When she came home from tour, Marion said she worked with her own line of girls at night clubs.

“Then all the girls started getting married. So, when I came back to Hollywood, went on tour with ‘Rowan & Martin’s Laugh-in Show’ on national TV and I toured with them. I was their lead dancer,” Marion said.

The Loves of Her Life

Daughter Catherine loves to tell the romantic story of how Marion and her father, David, met.

Performing two shows a night at the Caliente Turf Club in Mexicali (a former racetrack for horse and dog races), David Martinez was watching this young dancer who he could not keep his eyes off, Catherine said.

He instantly fell in love, she said.

David introduced himself to Marion’s parents and he followed her and stayed outside her hotel room with flowers and wasn’t going to leave. Coming from a Mexican culture, he ended up in Hartford, asking her father for her hand in marriage.

David and Marion married in 1956, Catherine said, and Marion took a break from her dancing career to raise a family.

“I wish there were more men like my dad,” Catherine said. “He was an absolute romantic, handsome, Hispanic man. He adored my mother and woke up every day and said how beautiful she was. He worked two jobs to support the family.

“My father was an incredible dancer also,” Catherine said. “They were like Fred Astaire and Ginger Rogers on the dance floor. When they would go to Mexicali galas, people would literally sit down and watch them.”

David died in 1994. About six years later, she met Clint Rockwell from Colorado.

“He was a wonderful dancer also,” Marion said. “I met him at the park (Desert Trails in El Centro) while I was teaching ballroom at the golf course.” Clint died in 2011.

Marion’s son, “Stevie,” said Clint was really good for her. “I love him for that,” he said.

Marion’s talent for music and dance rubbed off on all her children … and others’ children as well.

In her life as a dedicated parent, she reared a teacher in Catherine; a dance instructor in Patricia (“My mother taught me everything I know — in life and in dancing,” Patty said) and two working musicians in Anthony, a bass player, and Steven, a drummer, both living out of state and performing regularly.

The late William was known as one of the best auto mechanics in the Valley, family said.

She has influenced so many lives. One recent example is the Rendon sisters who opened their own dance studio — Top Hat Dance Studio in Calexico.

Marion trained the Rendon sisters and they now share their passion for the art of dance through their own studio.

“As they recently shared with my mom, she was the inspiration for their opening the studio in Calexico,” Catherine said.

Marion said the Rendon sisters were great dancers — as part of the “Marionettes” dance group — they competed and won at Las Vegas dance conventions. “The Marionettes were grand champion in their tap routine in Disneyland in Anaheim,” Marion said.

“Her (Marion’s) specialty was tap and her studio was very well-known for its tappers,” Monica Rendon said, who is now an English teacher at Enrique Camarena Junior High School in Calexico. “I love Ms. Martinez, heart and soul.”

Marion has seen and done it all, and maintains this bit of advice for those in pursuit of lofty goals: “Hang tight, follow through on your dreams, don’t let anything or anyone deter you, and always keep going.”