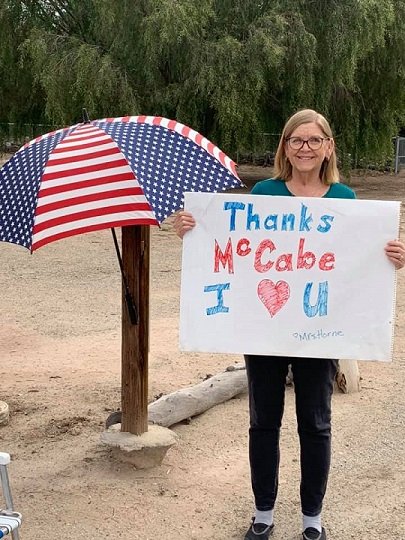 McCabe Union School District board member Alexa Horne, a former kinder teacher at the district, holds up a sign outside her home during a drive-by parade for McCabe students and staff held March 31. | PHOTO COURTESY OF ALEXA HORNE
Home
Regional News
In Regional News

IMPERIAL COUNTY — Despite technology’s long reach to bridge the education breach that has resulted from social distancing due to the coronavirus pandemic, some students, teachers and administrators are looking to ways to keep connected to their campuses.

Several schools in Imperial County found a way to spark that connection with “parades” through their home neighborhoods, and it will be needed as news spread March 31 that state Superintendent of Public Instruction Tony Thurmond has recommended students not return to school campuses before the end of the 2019-2020 school year.

Pine School in Holtville resorted to a list of students and a paper map of Holtville streets to conduct a drive-by parade on March 24 to re-connect with one another, explained Pine Principal Patricia Harrison.

A caravan of cars left downtown Holtville about 11 a.m. and wound its way through the school’s jurisdiction to wave hello and shout encouragement to students and school staff alike. Nine of 11 teachers participated along with two classroom aides and a yard-duty supervisor, Harrison said recently.

“The kids were so excited to see us,” she recalled. “It really made their day and we had a lot of response afterward.”

The idea at Pine School started with a teacher learning about the concept through social media. A female student could not have her birthday party owing to an illness. But a spirit of can-do determination prompted the idea of a drive-by parade to celebrate this student’s birthday.

When Harrison heard this, she took the concept and adapted it to the isolation of sheltering at home, the drive-by parade whisked away the distance-learning blues.

“We decorated the cars with homemade signs mostly made by our art teacher Gina Wright,” Harrison said. The principal then reached out to all the students’ parents to let them know when and how the parade route would proceed.

Seed of the Drive-by Parade Spreads

“We connected with them through the Remind app, text and phone calls,” said Harrison of letting parents know what was planned. “We let them know we’re still here and we still care.”

The parade took about two hours, starting off at an address on Holt Road and finishing up at Worthington Road and State Route 115. Students were out on their front lawns with signs they prepared themselves, wearing their Pine School T-shirts and in many cases with parents and even grandparents.

“It was very heartwarming experience for all of us,” Harrison added. “They were shouting out their teacher’s names and mine, too. And we let them know we had missed them, too.”

Another school who had a drive-by parade included McCabe Elementary School, which had theirs on March 31. Attempts to reach McCabe administration by deadline were unsuccessful.

Calexico Unified School District also scheduled a drive-by parade. It was planned for April 1. The car caravan was to depart from Enrique Camarena Junior High School and continue down Rivera Street, then to Seventh Street, after it went down Holdridge Street, to Sapphire Street, and finally Zapata Street.

Alejandra Limon, public information officer for CUSD, cautioned students to stand back from the road, wait outside with parents or view from an inside window, continue to practice social distancing but do not gather with extended family and friends, make up a sign or chalk your sidewalk and wave at the caravan.

“Most of all, we want the students to know, we miss our Firebirds and want to see you,” she said. 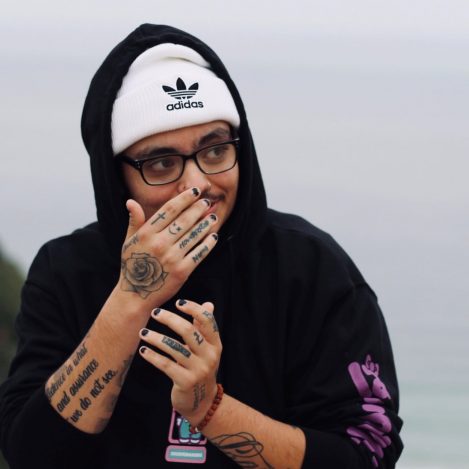