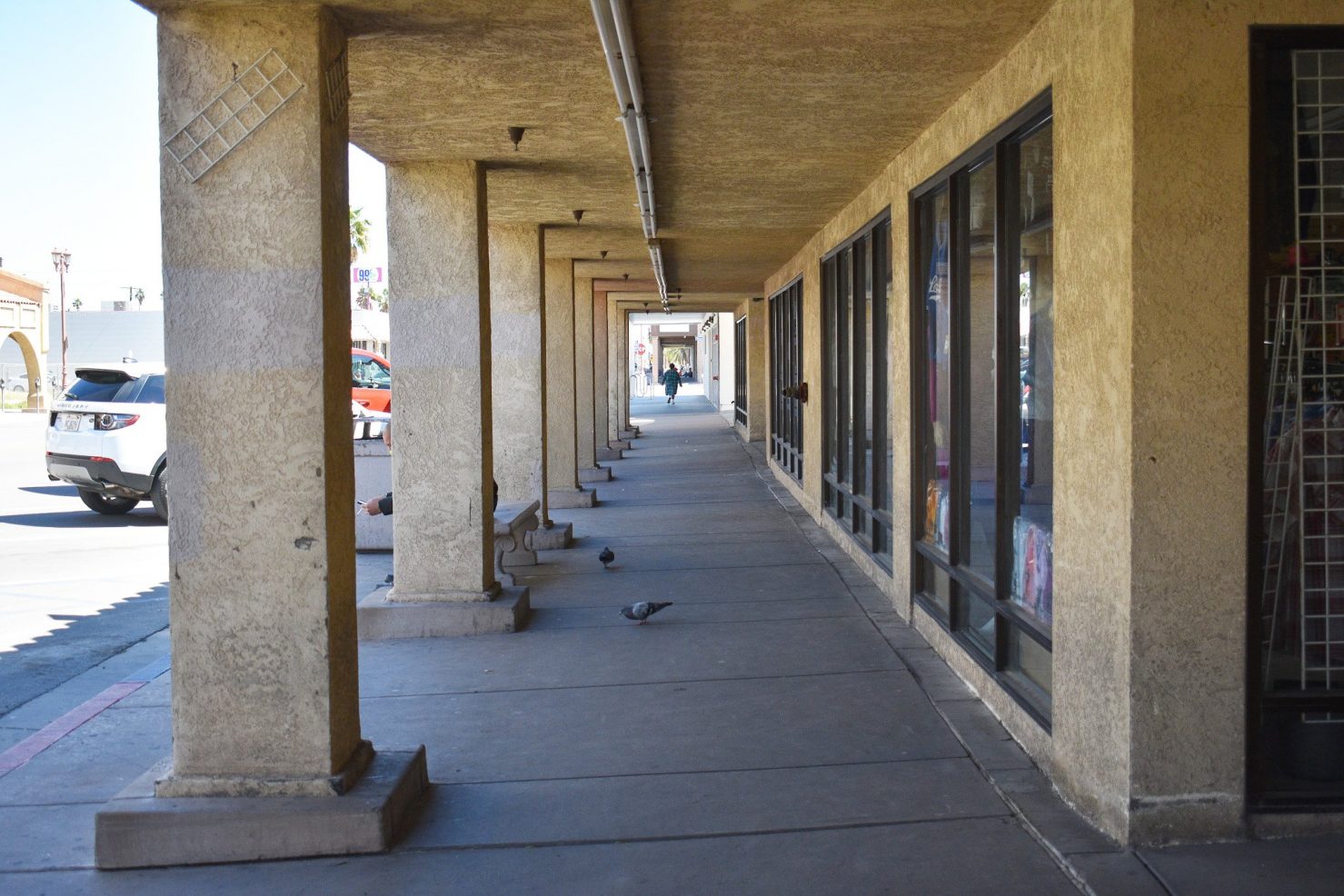 Forced non-essential business closures by the state coupled with federal travel restrictions on the U.S.-Mexico border all but turned downtown Calexico into a ghost town March 24. City officials say they've never seen anything like this before, and they expect the results to be "disastrous" to the city's economy. | CORISSA IBARRA PHOTO
Home
COVID-19
In COVID-19Featured Stories

CALEXICO — For a city largely dependent on the spending power of tens of thousands of people who cross the border daily to shop, the one-two punch of forced non-essential business closures and travel restrictions between the U.S. and Mexico to limit the spread of COVID-19 is going to have “disastrous” effects on Calexico, officials say.

Yet authorities begrudgingly understand it’s an unprecedented but necessary sacrifice for public health.

“This is disastrous. … My opinion is, this is going to be devastating on (the national economy). Calexico may take an even bigger hit. The whole county depends on border-crossing (dollars), Calexico in particular,” City Manager David Dale said March 23.

Forced closures by Gov. Gavin Newsom of nonessential retail businesses through at least until the end of the month, coupled with travel restrictions that all but eliminate visitors from Mexico who aren’t here to work in essential jobs, will greatly impact not only local business profits but the sales-tax revenue that helps bolster the city budget, Dale said.

“It’s going to have a dreadful impact on sales tax, but the local priority is to the health and welfare of the people, and we take that seriously,” Dale said.

California, along with Washington state and New York City, are among the nation’s hotspots for COVID-19 transmission and are under some of the sternest restrictions in the country. And while only nine positive cases had been identified in Imperial County as of March 24, the numbers of those being tested who are suspected of having the virus has ramped up considerably this week.

The Scene on the Streets

Although many Mexican nationals who work in essential jobs can still be found in Calexico at all hours, especially those involved in the agricultural harvest, foot traffic in the city was noticeably down March 23, with many of the downtown shops closed or in the process of closing.

Despite the governor’s mandate having taken effect March 20, Dale said business owners were still being told to close their doors late in the day March 23, and he said citations were being issued.

However, authorities were not immediately issuing those citations, Police Chief Gonzalo Gerardo said.

The chief had officers visiting retailers March 20 and March 21 warning them to close their doors if they were not providing essential functions such as food service or providing groceries or gasoline, for instance.

Officers first notified retailers they had to close, logged everyone they had spoken with, and then police were planning to revisit and issue citations if need be, the chief added.

“There is no gray in this; it’s a black and white issue,” Gerardo said. “You’re either essential or you’re non-essential.”

As for the border travel restrictions, which also took effect March 20 and will last at least 30 days, visitors from Mexicali with border-crossing cards, laser visas and day travelers using passports are barred from coming into the country. Those with green cards are still allowed depending on the industry they work in.

“We’re still going to see lots of people go through our city,” Gerardo added. “There are a lot of essential workers from Mexicali. Agricultural workers, of course … fast-food workers, mechanics, people who work at Walmart or Food4Less.”

As a businessman in Calexico and primarily a downtown merchant for 41 years, City Council Member Morris Reisen said he has lived through several peso devaluations and at least two devastating earthquakes that have disrupted the often fragile economy of Calexico. But what he’s witnessing today is unlike anything he’s ever experienced.

When the announcement came down that the Trump administration would be instituting travel restrictions, Reisen on March 20 called the move “suicidal” for Calexico’s economy and assumed at that point it would merely be bad.

But he said it’s much worse than he imagined.

Although he’s retired, Reisen still hangs around the downtown daily and has a few clients he works with on a limited basis. Not on March 23, where he was at home amazed by what was happening.

“Never have I seen anything like this,” he said. “We’re hurting.”

Reisen, who prides himself on watching over the downtown, planned to get in his red pickup later in the evening March 23 and check on the shuttered shops.

Although Louis Wong had the option to stay open and serve food for delivery or takeout as an essential business, the longtime Calexico restaurateur was preparing to shut down March 20 for at least two weeks, possibly longer.

He said he has closed for vacations, “but not like this.”

“I’m concerned not only for my business, but for the rest of the businesses from California to New York,” Wong said. “We are linked like a chain. I don’t want to see businesses in Calexico close.”

How Severe Will the Losses Be?

Calexico, like cities and counties all over the country, are a critical juncture in their operations. Everyone is at the midpoint in their fiscal year and working on the development of the budget for the coming fiscal year, which starts July 1.

An unexpected and sudden forced downtown in the economy completely alters any projected sales-tax revenues for the remainder of current year and jeopardizes revenue projections for the coming year.

“There’s no question sales taxes will not come in the second quarter as predicted,” Dale said. “Every city is facing this issue.

“We’re looking at a big retraction” in the second quarter, which is April through June, Dale said.

Calling these unchartered waters, he added there’s no way to tell if the country is headed for a long-term recession or if the economy will recover more quickly once the pandemic passes.

“Nobody really knows,” he said, adding that for now all that is certain is that second-quarter numbers are going to be “devastating” and “disastrous.”

Although Dale did not have any “hard numbers” to refer to or any projections for the 2020-2021 budget now being developed, it’s clear anecdotally the effect will be significant on both sales taxes and losses of profit for the businesses in Calexico and all over Imperial County, especially those hit hardest by the travel restrictions.

In 2014 Imperial County saw 18.6 million people traveling into Imperial County from Mexicali through the Calexico area ports of entry, according to a 2017 Imperial Valley Border Economic Impact Study.

An average of 51,100 border-crossers entered the county each day during the study period, with 32,300 people entering Calexico daily through the downtown port alone.

Mexicali residents were believed to have spent some $380 million in Imperial County in 2016, accounting for 20 percent of all retail, food and drink sales in the county that year (of $1.93 billion total), according to the study.

Imperial County District 1 Supervisor Jesus Escobar, a former Calexico council member, was asked whether Calexico and the county will be quick to recover from the economic effects of COVID-19.

“It’s an unfair question,” Escobar said March 20. “We’ve never lived through something like this.”

All that is known, the supervisor added, is, “Our priority is to the health and well-being of our citizens right now.”