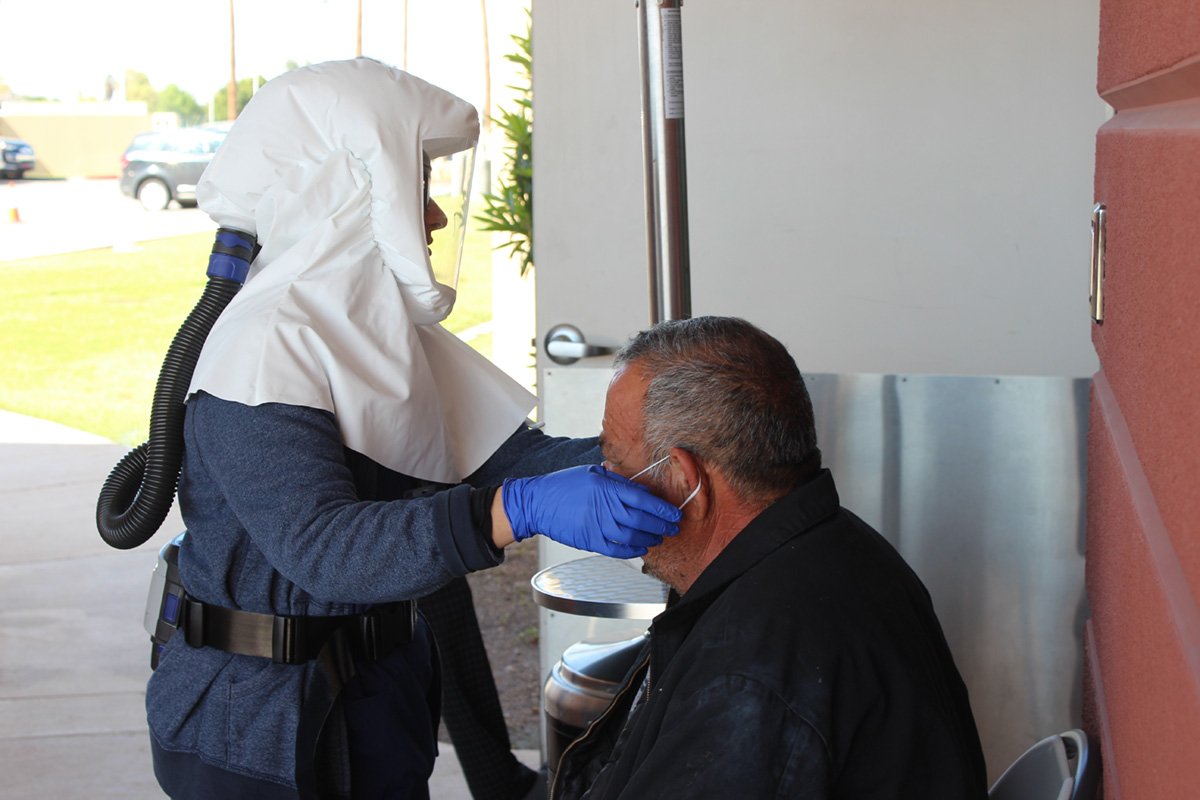 An unidentified El Centro Regional Medical Center emergency department staff member examines an unidentified patient in the triage area of the hospital recently. The woman is wearing a Powered Air-Purifying Respirator, or PAPR, that protects nurses, doctors and other ER staff from coming in contact with COVID-19 infection. One ECRMC nurse official said during a March 23 interview that the PAPR is in short supply and that more are needed. "That's a definite concern," the urse manager said. | PHOTO COURTESY OF ECRMC
Home
COVID-19
In COVID-19

IMPERIAL VALLEY — As critical shortages of masks and respirators put frontline health workers in the line of fire across the nation, there were few outward indications earlier in the week that local healthcare providers were in the same situation in their fight against COVID-19.

But inwardly, the local system is clearly feeling the strain being experienced elsewhere, and some local officials believe the worst is yet to come.

By next week and through the month of April, local emergency departments could be overwhelmed by the virus if social distancing, mandatory lockdowns and measures undertaken over the last few weeks don’t begin to take hold.

“Yes, that’s what I’m expecting,” said Judy Cruz, when asked about the prediction by most health officials that April will be the month where hospitals are in crisis conditions.

“I expect that to start happening next week and the week after.”

Cruz, who is emergency department nurse manager for El Centro Regional Medical Center, said this during an initial interview March 19. By the time she was contacted a few days later, March 23, conditions at El Centro’s ER had already began to deteriorate, with volume of patients experiencing COVID symptoms increasing and ER staff in short supply of critical protective components like the powered air-purifying respirator, or PAPR, a full hooded face shield with a powered breathing source.

ECRMC did not have enough PAPRs to protect staff as of March 23. “That’s a definite concern,” Cruz said.

Although she said staff was doing “OK” with its numbers of masks, goggles, gowns and gloves, Cruz admitted that staff did not have free and clear access to such gear and that there was “restricted” or
controlled access” to the supplies through charge nurses and “leadership.”

Ratcheting Up the Pressure

When Cruz spoke to this newspaper March 19, there were only two confirmed cases of COVID in the county and anywhere from eight to 11 cases pending test results. ER traffic at El Centro Regional was steady but not overwhelming, with several patients lined up in their cars awaiting testing at any one time and several isolation bays consistently occupied by potential COVID patients.

As of March 23, when Cruz spoke to this newspaper again, the ER was “now full, whereas last week it was not,” she said, and supplies were either being metered or there were not enough, as in the case of the PAPR. There were nine COVID-19 patients confirmed in the county as of March 24 and 30 pending test results at San Diego’s public health lab.

“If people self-isolate, we hope (April’s increase) won’t happen,” Cruz said March 19, which in effect is what is referred to as “flattening the curve,” or the theory that self-quarantining and social distancing will reduce an exponential impact on the nation’s healthcare system to the same volume but over a greater length of time.

Cracks in the Supply Chain

March 24 was key in revealing how much strain the local system might be under for protective gear for healthcare workers … but from very different standpoints.

On the afternoon of March 24, ECRMC Chief Executive Officer Adolphe Edward took to Facebook Live to cheerily rally the community via social media, thanking staff and ensuring the public that protective gear shipments of masks had just been received that morning and thanked local “seamstresses” for making cloth masks for hospital staff.

Everyone was smiling, and nurses and ER workers sang to the public live on social media.

In quite a different view of the potential protective gear shortages, local Teamsters 542 business representative Ruth Duarte described to the Imperial County Board of Supervisors how she witnessed a confrontation in the county administrative center parking lot between a frontline healthcare worker and that worker’s county Public Health Department supervisor over access to masks.

Duarte made the statements during public comment the morning of March 24, so no county board members or staff offered up any immediate explanations.

Pioneers Memorial Healthcare District and Clinicas De Salud Del Pueblo Inc. officials have been repeatedly contacted for this story for more than a week but have not responded to inquiries.

What is happening in healthcare today is comparable to seeing soldiers deployed into war, Cruz said March 19.

As a supervisor of about 130 ECRMC emergency staff, including registered nurses, patient care technicians and the “scribes” who work alongside the physicians documenting vitals and orders, Cruz is arguably El Centro’s field general in the battle against COVID-19.

“When you deploy your soldiers to war … you expect bombs and bullets, but you can’t see this,” Cruz said of the novel coronavirus. “It makes you uncomfortable when you can’t see it.”

Nurses and those who encounter sick patients often have extreme anxiety themselves, worried about being exposed to the disease and taking it home to family members, especially when the virus is so virulent and contagious.

“I’m extremely proud of our staff and how they’ve adapted in this challenging time. Putting on gowns, masks, face shields, can be very taxing, can be trying,” she said.

Staff is constantly in training mode, discussing COVID-19 in “pop up” education sessions in huddles for the last three weeks, Cruz said.

“In my mind, everybody has (COVID-19), because we’re not testing for it … We’re all being exposed all day. … That’s the mindset every one of us has while we’re at work,” Cruz said March 19 when testing supplies were still in short supply in much of the country.

She said that mindset made the ER staff sharper, more aware of their surroundings and potential for contamination.

“I’ve washed my hands more in two weeks than ever before because we’re in this hyper awareness mindset.”

Back on March 9, El Centro ER officials began limiting staff and the public’s exposure to potential COVID patients before the numbers began to creep up and before testing was more widely available.

To minimize staff and public exposure, ER officials triaged possible COVID patients in a different area of the ER, routing those exhibiting respiratory-ailment symptoms to a separate ER entrance and away from the waiting room, Cruz said March 19.

Patients were asked to sit in their cars until they could be screened by a doctor. If they were believed to have COVID but not tested (Centers for Disease Control and Prevention allowed only high-risk populations to be tested at the time that had co-morbidities like asthma, diabetes, heart disease, age 65 of older or those coming from areas with known COVID cases), they were sent home and told to isolate because there was no known treatment for them anyway.

Those too sick to wait in their cars were sent to isolation bays with access to a limited amount of staff. Of the positive cases that came through ECRMC, CEO Edward said March 24 that only three had been admitted to the hospital and one was still being treated here. The rest were sent home or transferred to other hospitals for more acute care.

Prior to March 19, the most Cruz had seen was eight to 10 patients awaiting in their cars and 10 isolation bays in use until courses of treatment could be decided or discharges done.

“We do have an algorithm we follow for testing. We are only testing the people who are sick enough to be hospitalized,” Cruz said at the time.

Just in the last few days the number of pending tests has ramped up and the widespread availability of testing supplies has increased as well.

Edward said that risk to frontline staff was being mitigated through the presence of essential healthcare workers on the premises only and potential COVID patients being isolated away from others, staff and patients included.

Those staff members directly dealing with patient care were being screened for elevated temperatures as they arrive at work, Edward added.

As of March 24, Edward said ECRMC had seen four positive patients and tested a total of 39 others. Some 18 tests were pending, and 17 tests had come back negative.

In general, the availability of testing supplies has been increasing in Imperial County steadily.

‘Hellfire’ at Hospitals; Surge Through End of February

Vo was doing testing by appointment only after his regular operating hours the evening of March 24, but he was still screening patients to clear them to take the tests, per CDC protocol, according to one of his staff members who answered the phone at his Calexico clinic.

On Facebook, pediatrician Vishwa Kapoor was also promoting that she had swab kits available. It appeared the curb-side testing had to be doctor-approved as well.

Private labs like LabCorp and Quest had been testing for a couple of weeks. The hospitals, however, are only sending COVID tests to the nearest public lab, which is in San Diego.

What Others are Doing

Although not immediately perceived to be on the frontlines like ER workers, county Public Health Department officials are coming in close contact with potential positive COVID cases daily and risking exposure themselves.

Public Health has activated a department operations center, “where we continue to monitor and respond to the 2019 novel Coronavirus (COVID-19) outbreak. Additionally, we are conducting case and contact investigations, providing information on measures to take for individuals who have had prolonged exposure to confirmed cases,” according to unidentified epidemiology staff members who responded to this newspaper’s questions through email March 20.

“ICPHD staff work closely with the local hospitals in the process of picking up, packaging and shipping lab samples for COVID-19 testing,” an epidemiology staff member stated regarding how they might come in direct contact with the virus.

Dealing with the Anxiety

Meanwhile, ECRMC’s nurse manager Cruz said she has plans to help celebrate the ER staff’s accomplishments and relieve stress once the pressure begins to really mount in the coming weeks.

So far, it’s been helpful to ER staff to deal with their stress by repeated drills and by talking about what’s happening, Cruz said March 19.

“Mostly, just knowing that we’re following the rules of infection control and that we have each other’s back” is enough, she said. “Sharing our struggles with each other is very helpful, too.”

Getting dressed to treat a potential COVID patient is both stressful and important to the safety of frontline health workers, Cruz explained.

Sealing up properly according to the rules of infection control from the CDC is key to staff safety.

For some staff members, like the 14 men in the ER who sport beards, they can’t seal properly with masks and face shields or goggles because of their facial hair. For them, they must wear the PAPR to be protected.

The seal “keeps out the dangerous droplets” that spread COVID-19.

It’s all about the seal, she said. 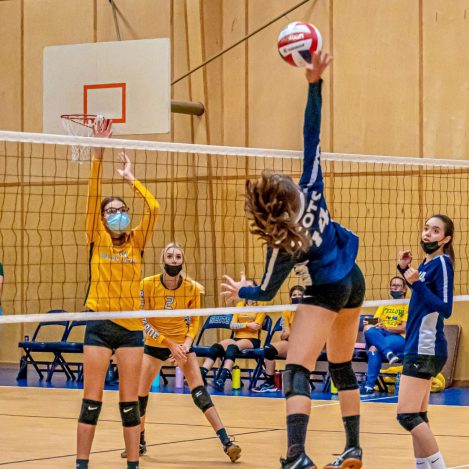