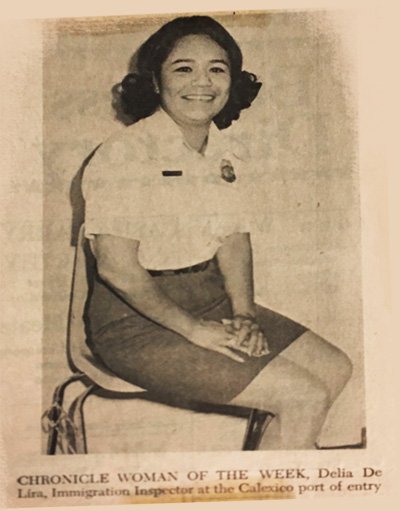 CALEXICO — Even though judged well-qualified to become an immigration inspector by management at the downtown Calexico Port of Entry, a local woman was warned at the last minute she would plunge into a dangerous situation and have to deal with some ruthless people if she pursued her dream of working as an immigration inspector.

“I was a little hesitant because I was going into an all-male environment but I was really enthused and even though I’m tiny, five feet and a 100 pounds, I knew I could do it and was determined,” said Delia De Lira. “I passed all the written tests but still had to go before the oral board.”

De Lira already was working for the Immigration and Naturalization Service, now part of the Department of Homeland Security, for several years. She was hired right out of Calexico High School after a career day tour of the port during her senior year. But she started off in the stenography pool doing shorthand and typing.

After several years, she was promoted to office receptionist where she was coached in the fundamentals of immigration law. She then had to screen documents of applicants wanting to cross the U.S./Mexican border, including border crossing cards, field worker cards or visitors arriving to shop or see family.

“I’d say 98 percent were from Mexico,” recalled De Lira. “But this was interesting work and then a supervisor I very much respected, Rufus D’Albini, told me, ‘You’re so sharp, why don’t you apply for immigration inspector?’”

De Lira was bursting with confidence she could perform up to standard despite male applicants who taunted and when male immigrants called her a bitch, she would break down and cry. This was 1971 at the height of the Equal Rights Amendment campaign. Despite the discouragement, De Lira stood her ground and passed her oral exams, too, and after six weeks training in Brownsville, Tex., became the first women immigration inspector.

“I was proud because I broke ground for other women,” she boasted. “Other women heard about me and followed me into the next class. They thought, ‘If she can do it, so can we.’”

Her primary task was to check border crossers had valid (not forged) documents including green cards, border crossing cards and visas, among other necessary papers. She also received a more thorough grounding in immigration law and learned to be watchful of immigrants smuggling drugs or agricultural products that could bring in an infestation of pests.

“We had to check as they drove up to the inspection booth and there was some pressure because we had to finish within three minutes,” De Lira recalled.

“We had to inspect their cars and study their body language, determine if they carried contraband. It was not easy because some objected to a female authority, complaining ‘How dare you ask me to open the trunk?’” she added.

Inspectors had to rotate from primary lanes for cars to pedestrian lanes and she remembered finding 12 falsified papers within a half hour. She said she realized some border crossers assumed because she was female she was an easy target to deceive.

“But I became notorious for intercepting false documents,” she said. “Afterwards, we had to type up reports and I had an advantage from my secretarial work and could complete reports in 10 minutes while my male colleagues took a half hour.”

Within six months, De Lira won over her male co-workers who then thought of her as “one of the guys.” But because of her deft typing skills a supervisor offered to have De Lira complete the reports for all the inspectors on her shift. But she said no that she was no longer a secretary but now an inspector. Her insight eventually paid off.

In 1976, De Lira was promoted to supervisory inspector and became a shift supervisor who made out shift schedules, filled out performance ratings and coordinated with intelligence agents regarding warnings of contraband likely to be smuggled.

De Lira worked at INS through 1995, 31 years of service, and looks back on it as a good career.

She admits she cannot be content being idle and yet after a long successful career that most would find fulfilling, and happily settle into retirement, De Lira added a second act to her vocation. She now works as a secretary for a construction company in Imperial. She calls herself a workaholic who has had several private-sector jobs and volunteered for the American Cancer Society until last year. “I’m glad way back in high school I made the correct decision,” she said. “Little did I know when I took a tour of the Port of Entry (four lanes only then) that I’d become an immigration inspector.” 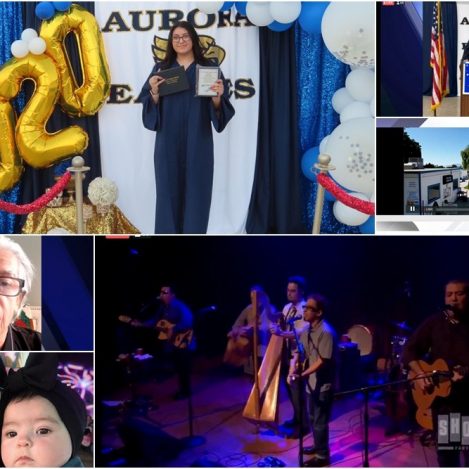