COVID-19 Wrap: Food is On Everyone’s Mind as Stay-at-Home Orders Set In; Nine Positive Cases, 30 Tests Pending as of March 25

IMPERIAL VALLEY — As panic-purchasers continue to buy up everything from toilet paper to bottled water as fast as it can be restocked, grocery store shelves are consistently running bare of food essentials as mandatory stay-in-place orders due to the threat of COVID keep people at home, out of work and in need.

Getting enough to eat during this time of forced self-quarantine and social distancing is on the minds of many as numbers flocking to food distributions quadrupled in some cases this week and lines to distribute student meals have grown from virtually no wait last week to waits of up to an hour or more this week.

“This shows the crisis people are in with the food supply,” said Sara Griffen, executive director of the Imperial Valley Food Bank, whose agency normally serves about 80 families during its end-of-the-month distribution at its headquarters.

On March 23, the Food Bank distributed commodities to 332 families.

“Thankfully, we have a seat at the table at the (Imperial County) Emergency Operations Center,” Griffen said during a brief interview March 24, and can directly hear about the need and coordinate relief with local officials.

Meanwhile, the numbers of COVID-19 positive patients and pending test results grow by the day, making it difficult to stay abreast of new developments in the fast-paced spread of the virus.

Nine people have tested positive for COVID-19 and some 30 tests were pending at the San Diego Public Health Laboratory, the Imperial County Public Health Department announced the evening of March 24.

So far, 56 tests have come back negative from a combination of public health lab and private lab testing as of mid-morning March 25. Public Health was reporting that 95 tests have been conducted since the outbreak began in Imperial County a couple of weeks ago.

Three new positive COVID-19 cases were announced by Public Health just before 7 p.m. March 23. Each of the new cases “has been linked to having close contact with previously confirmed local cases,” officials reported, and all three cases had mild symptoms that did not require hospitalization.

“We understand that the continued increase of positive cases is concerning for Imperial County residents,” physician Stephen Munday, Imperial County’s health officer, stated in a press release. “This underscores the importance for residents to heed to the recommendations for social distancing and self-isolation. These measures requiring residents to stay at home and maintain social distancing will help reduce the spread of the virus in the community.”

Although they have yet to use the term “community spread,” health officials now consider the virus entrenched in the county and being transmitted by person-to-person contact.

“Imperial County finds itself in a new phase of the response now and everyone should be functioning as if they have already been exposed, that is why local officials have taken the extreme measures to have people stay home,” Public Health stated in the release.

Just several days into the mandatory lockdowns and stay-at-home orders, and the Imperial Valley Food Bank has already set a record, the organization’s marketing and communications manager Stefanie Campos said.

The 332 families fed March 23 represents a quadrupling of the normal monthly numbers of families fed at the bank’s warehouse in Imperial.

In March, with several days to go, the food bank has fed more than 400 families from its Aten Road headquarters, Campos said.

“That’s the most we’ve ever done,” she added.

The end-of-the-month distribution was doubly unique in that not only was there a surge in need, it was the first time the distribution was not done face-to-face and instead by car to limit potential COVID transmission.

Two dozen food bank staff and volunteers, and police officers and public works officials from the city of Imperial had to be called in to direct traffic on Aten Road as vehicles clogged the heavily traveled thoroughfare, Campos said.

The distribution started late in the afternoon and had to be cut off around 6:30 p.m.

The I.V. Food Bank also goes out to different sites around the county to assist in delivering food through regional pantries with partnering agencies, Campos added.

On March 24, some 143 families in Calexico were fed during a pantry distribution, according to a post on the I.V. Food Bank’s Facebook page.

Making Sure Communities Are Fed

Feeding constituents was on the mind of some members of the county Board of Supervisors on the morning of March 24.

Dipping into a discretionary fund allotted to each county board member for use in their district, District 4 Supervisor Ryan Kelley committed several thousand dollars to regional food pantries in the north end of the Valley.

He asked that $1,000 each be provided immediately to Loaves and Fishes food pantries in Niland, Calipatria, Brawley, Westmorland and West Shores, for a total of $5,000. The money comes from the county’s community benefits fund.

“This will help pay for the increasing costs of materials and with more people having demands” for food, Kelley said March 24.

District 5 Supervisor Ray Castillo followed suit, directing $1,000 to the Brown Bag Coalition in Calexico, which feeds the homeless every day at Border Friendship Park in the city.

Ensuring Seniors Get Enough to Eat

The local Area Agency on Aging had requests for food aid “overnight” from more than 58 senior citizens between March 23 and March 24, director and county Public Administrator Rosie Blankenship said during the county board meeting March 24.

She said some 20,000 of the county’s 36,700 seniors are over 65 years old, the age group being told its at the highest risk for contracting COVID-19 and on forced self-isolation. Blankenship added 15,000 of those seniors are living below the federal poverty line.

The AAA is being “inundated with general relief assistance” calls, including for food assistance, Blankenship added.

Normally, the agency fields an average of 113 requests a day, but since the COVID outbreak, more than 300 daily requests have been coming in from seniors for food and other items that are being hoarded by panic shoppers, like toilet paper, hand sanitizer, facial tissue and non-perishable food items, she indicated.

‘Hellfire’ at Hospitals; Surge Through End of February

Broken Yolk Café in El Centro donated eggs, potatoes, milk and bread to the agency, and some 98 bags were being distributed with the food items to seniors March 24, Blankenship said.

With 17 separate school districts in Imperial County, the Imperial County Office of Education is trying to stay on top of changes to the federal food programs feeding local students during the state-mandated school closures, stated Alvaro Ramirez, ICOE’s safety and emergency preparedness coordinator, in an email to this newspaper March 24.

“Each school district is taking the approach they feel best meets the needs of their respective communities. Schools are continually assessing their processes in an effort to ensure the best service possible, and some school districts have modified their processes since the onset of the program,” Ramirez stated.

Some districts have added additional locations and some have opted to provide multiple meals at a time to minimize the need for residents under quarantine or practicing social distancing from needing to return twice a day, he stated.

Others yet have opted to provide meals for several days at a time and limited the number of days staff are providing meals in an effort to minimize the number of times families need to go to the schools, Ramirez added.

ICOE has a link on its home page (www.icoe.org) with information related to the provisions of meals.

“We make an effort to ensure the information is as up-to-date as possible and are in continual communication with our partner districts. For specific information in reference to metrics, concerns related to possible abuses, status of supplies, or other inquiries about a specific site, you will need to reach out to the individual districts,” Ramirez wrote in the email.

ICOE was asked whether there was concern that adults were using the student feeding programs themselves and whether that was an abuse of federal guidelines.

Ramirez did state that the programs are intended for children up to age 18.

In another active way the community is helping each other and its most vulnerable residents — seniors — through social media and crowd-sourcing, a closed, invitation-only group has launched on Facebook titled “Which Stores Have What in the Imp Valley.”

The group, which already has more than 8,400 members since launching March 19, continually directs group members to stores where items such as toilet paper and hand sanitizer is in stock.

One of the most prominent features is its posting of food sales prices and what food items are available, potential price-gouging warnings and places where seniors can go to get what they need and the times at which they can do it. 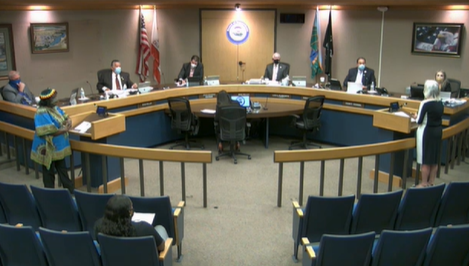 County Board Gets History Lesson on Imperial Valley’s Disenfranchised